When I first arrived in Fisherman’s Camp I met an Israeli who had walked some of the perimeter of Small Lake (also called Oloidien Bay or Lake depending on water levels) on the southwest corner of Lake Naivasha. He said he saw lots of animals, the same animals you pay $25 to see in nearby Hell’s Gate National Park. I listened carefully. It’s always wise to consult with Israelis on fiscal matters such as avoiding hefty national park fees, but the thing I would regret not taking note of was that he wasn’t walking around alone.
I was hitchhking to that part of the lake when a safari leader picked me up. I told him my walking plan and he put me on edge with his insistence and exclamations:
“Don’t get between a hippo and water!”
“Don’t move if a hippo is charging you!” (Riiiiiight.)
“Don’t scare the hippo! Sing or yell so it isn’t surprised!”

I saw lots of flamingos on the western shore of Small Lake but I didn’t get very far on my walk before a security guard came to say I was about to tread on private land (which is supposedly a dubious argument if I stayed on the lake shore, but I didn’t make an Israeli fuss about it.) Defeated, I hitchhiked back towards Fisherman’s Camp. Hitchhiking is very easy with white people around here and merely easy with black people, Indians being somewhere in the middle.
Three people in an SUV picked me up. I had to slide over a wide variety of empty bottles of alcohol to get in. The driver and his rheumy-eyed friend in the front seat had been doing plenty of drinking already, while the girl in the back seat looked fetching in a red cocktail dress. They had been partying, she explained, and the guys in front poured themselves drinks, asking if I wanted one. I was still fixated on the animals and not about whether drinking and driving in Kenya was tolerated, but when they pointed out to me small groups of impalas and zebras, and I got out of the car right away to watch.

Zebra crossing (It's funny if you know British English, innit?) 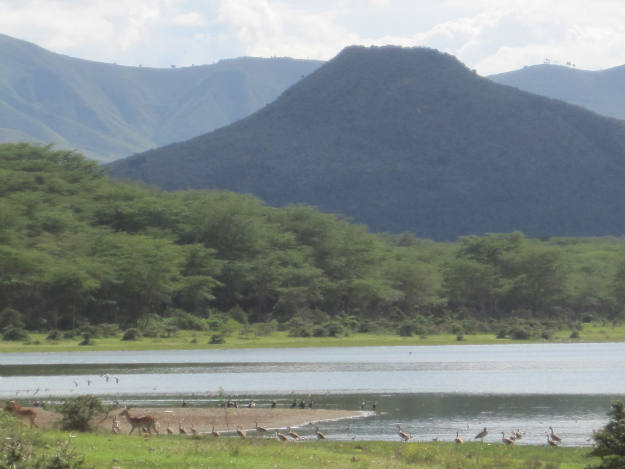 The shore of Small Lake. What lurks behind the facade? 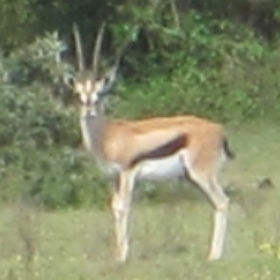 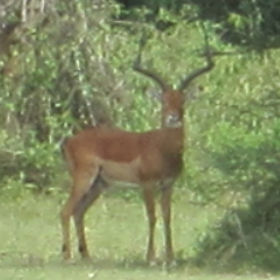 I was near the south shore of Small Lake and I found a path through an abandoned settlement to the lake. I walked in quietly through the forest to sneak up on zebras and gazelles in the clearing near the lake, but I went out with a racing heartbeat, squeezing an empty water bottle to make noise and fend off imaginary attacks from warthogs, buffaloes, and hippos.
Along the lake shore I could tell it was a busy place for animals as I saw a wide variety of droppings. The biggest ones didn’t look like or taste like hippo droppings, so I couldn’t be sure if—oh, wait, I guess I shouldn’t admit that I, um—never mind. I saw lots of gazelles, an impala, a herd(?) or zebras, but my presence startled every animal to stop and study me, then scurry off hastily. A gazelle at full gallop was cool to see, but I felt I was interrupting the animals’ roaming, invading their turf. I remembered the wise words of mighty Caleb D. House: “On safari I had the inescapable feeling of an inverted zoo.” I didn’t like obstructing the animals, so I decided to leave, but the problem was that I had walked so far along the lake I didn’t know how to get back through the forest to the road.
I made a beeline perpendicularly away from the water and behind some brush at a distance a warthog and I saw each other at the same time. It looked like a warthog. I stopped in my tracks and stared at it, wondering if it would charge me or be scared of me, but when it stood its ground, I retreated quickly. Suddenly I felt very alone and vulnerable. It was already late afternoon, when big animals might be coming out of their slumber to eat. I couldn’t see anything or anyone anywhere. I picked one path that had a lot of meter-high vegetation, but some rustling spooked me. On another path I freaked out when I saw plumes of dust stirred up, but couldn’t see what caused it.
I remembered the safari guide’s advice in dealing with hippos, to sing and make noise so it isn’t surprised, so I got out my water bottle to squeeze it and sing “I’ve Just Seen a Face” by The Beatles. I don’t know why that came to mind. What am I supposed to sing? What is the appropriate hippo-avoidance song? Walking quickly in a semi-panic and singing in distress while trying to remember lyrics and running away from imaginary hippos is difficult, if you have no such experience.
The end is boring: nothing dramatic happened. Worse, nothing dramatic happened on my 200th blog post on TheDromomaniac.com. How depressing. 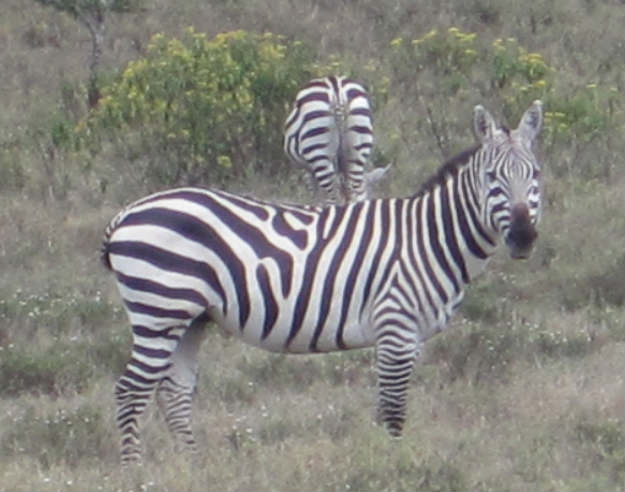