I spent a lot of time in the Fisherman’s Camp reception shack on the campsite staring blankly out at the lake, hanging out with Beth and Moses who worked there. Beth, like many Kenyan women, I am discovering, speaks with a soft lilt in her voice that is very attractive. She could be reading technical manuals and I would be enthralled. I would pay extra to hear a Kenyan woman’s voice read audiobooks. (ANOTHER free business idea from The Dromomaniac!) 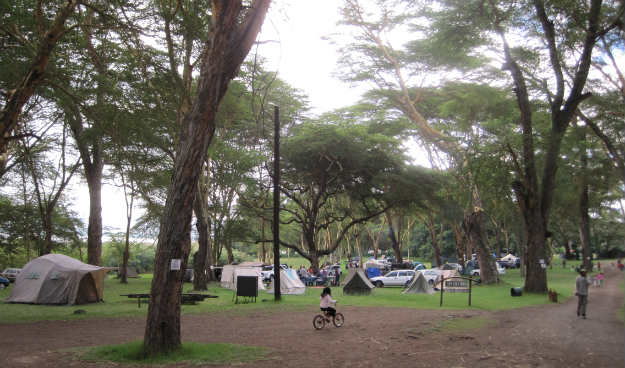 This was midday when people started to pour in. The same vantage point photo when hardly anyone was there was two posts ago.

When I arrived in Fisherman’s Camp there was hardly a car, just a few tents, but then the Easter crush came, and it was horrible. It was a zoo. Indians came in big groups, and I was amused that when checking in, they always demanded discounts. Some became agitated and there were raised voices, but it was just common banter. I initially mistook it for aggression because I thought their hackles were raised by Moses’ habit of calling every Indian who came into the office “Patel”.
It was noisy and hard to sleep. All the camp rules were broken in one fell swoop, but the owner told me the next day that Easter and Xmas breaks were a “cathartic release” for everyone and I shouldn’t expect quiet. I moved to Top Camp with the splendid views over the lake, but it was even worse. Two groups of people spent the entire night threatening and swearing at and each other. One guy started his car and revved his engine like he was going to run people over, but then there would be laughter; none of it made sense. I knew I was powerless to do anything because they were so drunk and on fire, and no one who worked there cared. 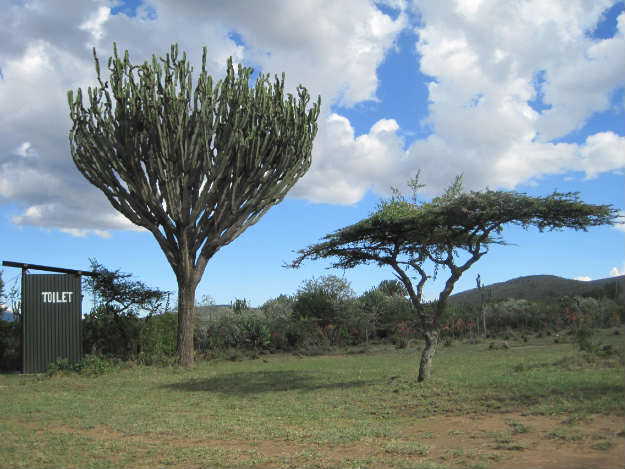 Since it was easy to hitchhike around the lake area, I decided to give hitchhhiking a go for the trip back to Nairobi, but I also wanted to avoid matatus if I could. A matatu is an old Japanese 14-seat passenger van that acts like a bus and is supposed to take only as many passengers as seats, but when they know there aren’t inspections, like late at night, they stuff as many people in as possible. Can I get used to the discomfort of 20 people crammed into a matatu? Would I ever want to if the feasible alternative is hitchhiking?
I read that matatus are being phased out across the country, but it’s hard to imagine. There are now seatbelts for each seat, but I doubt anyone uses them even if it is universally acknowledged that they drive like maniacs. Before there was any effort to regulate the number of passengers, there would be newspaper headlines like, “2 matatus in head-on collision, 53 killed.” 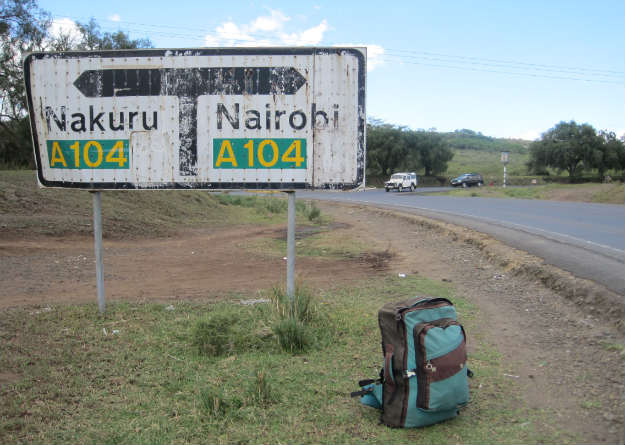 I easily hitched back to Nairobi. In fact, from the highway near Naivasha, I got a 100km ride straight to my hotel downtown, the New Kenya Lodge. The family that took me said they weren’t going out of their way to take me there, but it was hard to believe. I could tell they felt bad for me when they saw where I was staying. I mentioned I didn’t sleep well anywhere and the woman glanced up at the wreck of a hotel and pronounced with certainty, “You won’t be getting any sleep there.”
Not many people know this, but “new kenya lodge” is a Swahili phrase meaning “ultra-sad, decrepit hotel.” Only after I checked in did I read in the Lonely Planet book that at night the worst part of town for crime is the corner of Latema and River Roads, exactly where New Kenya Lodge is situated. Lovely.