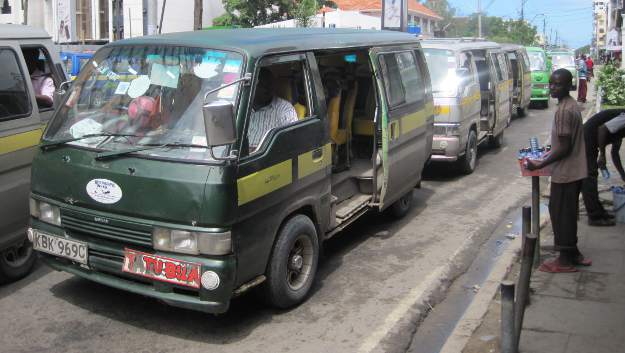 A line of matatus waiting for passengers; the calm before the storm

I hate matatus (vans that act as local buses) with a fiery passion. I hate everything about them. They alone can make me lose my enthusiasm for Africa. I hate the economic sense behind it where the drivers have to rent the vans daily and subsequently try with intense desperation to squeeze a profit, endangering everyone with their driving and stuffing passengers in without mercy. “Matatu” must be a Swahili word meaning “near death”.
Since the system forces the drivers to act the way they do. I can nearly absolve them because in what other aspects of Kenyan society do I see people behave like idiots? Kenyans, in fact, often have a very quiet rapport with each other, I have noticed, if they have newly met. I know that it is all part of the African experience, to not let stuff like matatus get to you, to go with the flow, but I’ve been on a few buses in my life and my tolerance is shrinking.
I have a simple solution to this. (I do! The Dromomaniac doesn’t just whine and moan, he provides solutions to the world’s problems!) The answer? Female matatu drivers. Paint the matatu pink, have a female driver and I guarantee every single woman in town would patronize it. The men would learn their lesson and drive sanely. Admit it: it’s another pure genius (FREE!) business idea from The Dromomaniac!
Thank you. 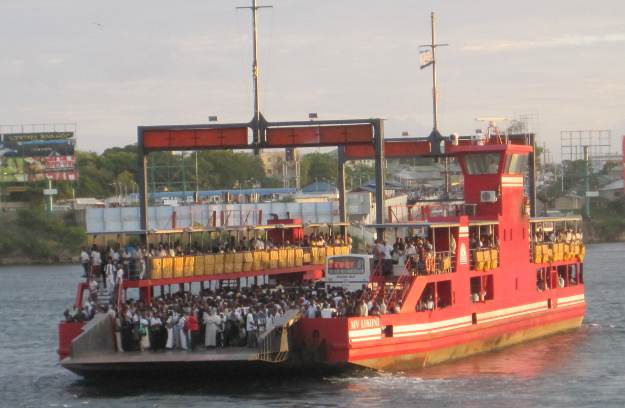 The ferry port on the south side of Mombasa is a matatu hub, so I avoided it and easily hitchhiked the 35km south to Ukunda, the turn-off for Diani Beach, with a British-Indian guy. Unfortunately, I meant to go to Tiwi Beach, the turnoff 5km back. I hitchhiked there with a local guy, then hitchhiked straight to Twiga Lodge with another local guy who sold security systems, the mother of all growth industries in Kenya.
Twiga Lodge was said to be a backpacker-friendly place, but 1500 shillings (US$18) is downright hostile to a backpacker. I walked a fair distance to investigate other options, but at dusk I had to come back with my tail between my legs and lose all my bargaining power. For 1500 shillings you can get 75 delicious fresh guava juices at Spicy Cafe in Mombasa’s Old Town! For 1500 shillings you can get 9 delicious mutton biryanis at Naushad’s Cold House in Mombasa’s Old Town! For 1500 shillings you can get seven and a half hair cuts at Yassin Hair cuts in Mombasa’s Old Town!
An outrage.
Tiwi Beach is an excellent, secluded hideaway of a beach but with significant seaweed and more local beach boys hustling than there are tourists. I was blissfully ignorant of any lurking evil, but I was quickly set straight: the 4km due west between the main road and the beach is dangerous. The beach as it extends south is dangerous. Oh, but north, too, there are bandits if you head around the headland. So, only the actual ocean eastward is safe? No, you can’t walk out at low tide: sea urchins. Great. (I know what it’s like to step on sea urchins. I had an operation for this in Vietnam.) 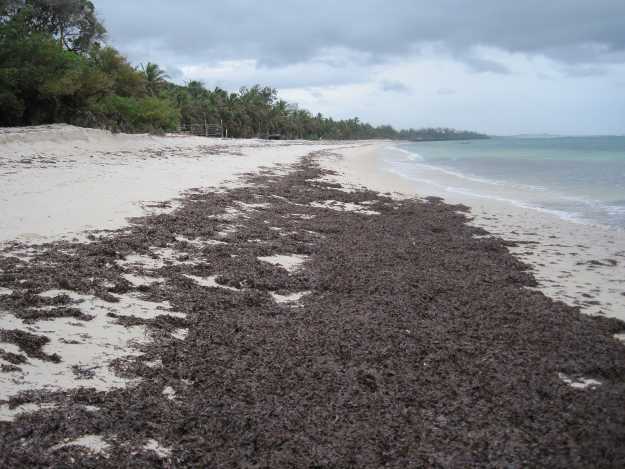 I had already walked the long way down to the tip of Tiwi, judging whether I could navigate the shallow river to Diani Beach when I met a local guy coming the other way. He said you can do it at low tide, but being alone here was most unwise. I would be mugged. I asked if it was really so, even in this calm place, and he showed me his arm where he had been slashed, saying that if people think you have a cell phone or 500 shillings (US$6), they will attack.
Low season now is the worst time since there are few jobs, the economy is going to hell, people are frustrated, etc. I walked all the way back to Twiga Lodge with him. He told me he made 5000 shillings a month (US$60), paying 1500 shillings a month to rent a place with his wife and son, and then of course, the price of maize is going up, sugar, etc. He walked this path of many kilometers to work because there is no public transport to get here and he had no other option. A bicycle would be a significant improvement to his life, but he didn’t have money for it.

I love this sign. In how many other countries do you see 'Not for sale' signs? They do this because some clever Kenyans manage to sell land that isn't theirs---and sell it 10 times!

I don’t know how I came to this thought, but I’ve had it since Day One: Kenya is cutthroat. I don’t mean it in a bad way, but Kenya is the New York to Ethiopia’s Seattle, say. You need to be on your toes here, and fools will not be suffered gladly. Like New York, you take extra precautions, but it doesn’t mean you enjoy it less. For example, in Kenya I lock my backpack inside my hotel room, often locking it to a big object so someone would have to slash it to make off with something as opposed to taking the bag completely.

In Nairobi it struck me that affluent people have their own taxi driver. They aren’t their personal drivers, but a normal taxi guy they can trust. (Is that like New York, too?) Same goes for motorcycle drivers, the guys who drive you to and from the main road to catch public transport. They all carry cell phones that they wedge into their helmets to talk hands-free, which always cracks me up for some reason.
Nairobi is the major leagues of conmen and hustlers. Philip told me he was swindled by a money-changer once and was so surprised by the professionalism of it that he had the nerve to go back and tell him that he realized what had happened, but he was more impressed than annoyed and asked him to show how he did it—and the guy did! Now that I am thinking about it, that might not have occurred in Kenya.
Kenyans need to be on their toes as much as travelers do. Cons big and small await the unsuspecting. Institutional corruption in Kenya is legendary. Not one day goes by in the newspapers without an expose, but it’s hardly news to Kenyans. The flip side of corruption is you have the liberating feeling that anything is possible if you slip someone a couple of bucks. If I ever want to fly cheaply out of Kenya to Europe, I would go to the Mombasa airport and bribe someone a couple of hundred bucks to put me on the Condor flight to Frankfurt or whatever the semi-charter airline is that goes to UK. This is kind of the Faustian bargainÃƒÂ¢Ã¢â€šÂ¬Ã¢â‚¬Âif I am using the term correctlyÃƒÂ¢Ã¢â€šÂ¬Ã¢â‚¬Âthat makes corruption hard to eliminate, because there can be benefits to it.
When you first get to Africa it’s unsettling to see so many idle people and their relentless stares, and you become a little fearful for your personal safety. It doesn’t sound like something you get used to, but you do in the same way you do flies and Ethiopian beggars. In the end, nothing is unnerving. This is why I say travel makes you a stronger person: nothing phases you after a while.
A Canadian guy once picked me up hitchhiking and then begged me not to hitchhike anymore, saying it was too dangerous. I smiled, waiting for him to see the irony. It reminded me of my first time in South Africa where I walked out of the airport in Johannesburg and hitchhiked to town. I didn’t think anything about it, but the mention of it to anybody caused a firestorm of opinion, and I became freaked out that I had cheated death.
There are ways to hitchhike intelligently by doing some selective profiling. For one, you can stand near a speedbump to get a good look at the car and its occupants, and is someone driving a $20,000 car really going to mess with me? I can’t imagine it. Maybe the guy driving is only taking it to clean it for the boss, but it still seems like mugging me is too much of a risk.
If something horrible happens to me tomorrow, would I have the same opinion?
Can we end on an uplifting note with this picture on Philip’s wall? 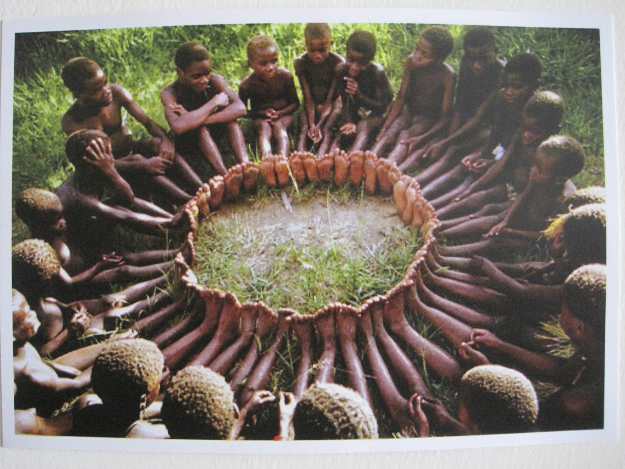