I more than met Banksy; I stayed over for two nights.
Fate began with the desire to move. The self-imposed prison at Tiwi Beach with the desperate beach boys was too much and the approaching rain looked formidable, so I decided to go to Diani Beach, the next one south.
A British girl named Tess (must be a stage name) and I hitchhiked the 5km pretty quickly, getting a ride with two Nairobi guys. She had been apprehensive about hitchhiking but took the chance since she was with such a powerful, protective force of nature, so I was glad we got a ride quickly to demonstrate its majesty.
The rain never let up, so Tess decided to head back to Tiwi. I didn’t know where to stay so I asked a guy sitting at a nearby restaurant if he knew the cheap hotel behind on the main road. He didn’t. He asked what I was doing and after about 30 seconds of small talk he said I could stay with him, that he lived near the beach and had a free room. Wow. I wasn’t expecting that. I was speechless for one of those rare moments of my life.
My favorite part is afterward where I extend my hand and say, “By the way, my name is Kent.” Can you imagine offering or accepting a place to stay to/from a guy of whom you don’t even know his name! It’s the magic of traveling (or the beginning of every horror movie.)
He had an incredible penthouse apartment with four bikes, three surfboards, a hanging bed, killer views and lots of interesting artwork with stencils, spray paint cans and unfinished projects laying around. He mentioned that he had been doing some graffiti in Nairobi. I said that in Mombasa Philip had shown me a place where a guy(?) named Space Invader had left his mark. Banksy was brought up, and my new friend said they were both from Bristol, England. 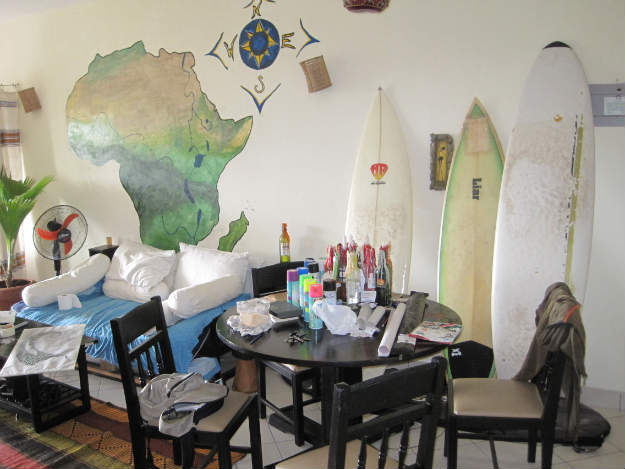 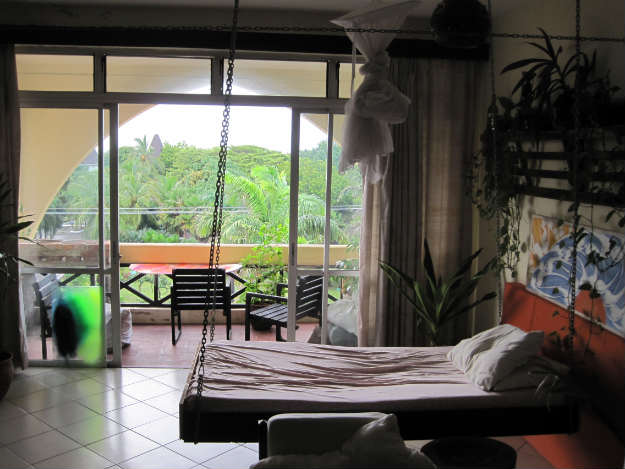 Banksy is an anonymous artist, most famous for his public space projects though no one know what he looks like. A cynic might say he is famous because no one know what he looks like, but in any case the rusty wheels in my head started to turn and it made me think that it might be him in the flesh.
Why would I think that? If this were Banksy, why would he tell me about the Bristol connection and mention the graffiti if he wanted to remain undercover? Why? To make me confront how impossible it would be that it was Banksy. You know how hard it is to be anonymous in the 21st century? You can’t do it by hiding, you do it by being out in the open. Ask Radovan Karadzic. You have to call people’s bluff to make it happen, for it to be the most absurd thing that the mellow, nice guy in front of you is someone else.
And look, he probably took one glance at me and my decrepit state (my kingdom for eight hours of sleep!) and assumed I wouldn’t know Banksy from Gumby, but as George Bush would say, “Don’t misunderestimate me!” I have my finger firmly on the pulse of popular culture. I used to live in Los Angeles, dude. I know someone who knew someone who used to know the gardener for Zsa Zsa Gabor’s nephew. Yo! 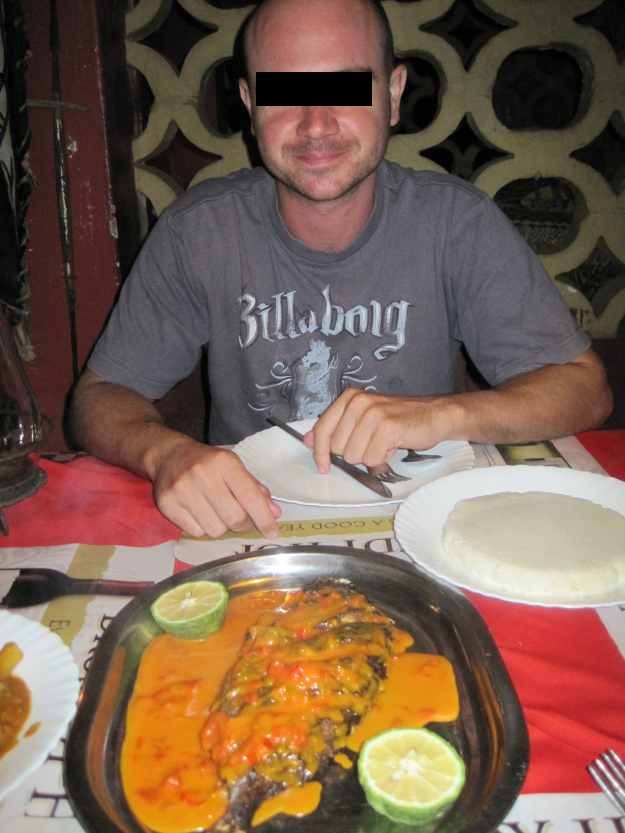 I asked him point blank: “If you are Banksy, would you tell me?” and he said “No.” Actually, he said two words, but let’s not get sidetracked. He even allowed me to take his photo, which is mere chutzpah to throw me off the scent, but have you seen my nose? I can smell a diversion at 50 meters. It takes more than that to sidetrack me.
The only thing that makes me think it wasn’t Banksy was that he was such a great guy: very kind, generous, unassuming. The real Banksy must be intolerably full of himself. But that is part of the whole deception! Don’t you see? It’s all elaborately planned out!
Banksy, thanks for a great two days in paradise. Your secret is (sort of) safe with me.