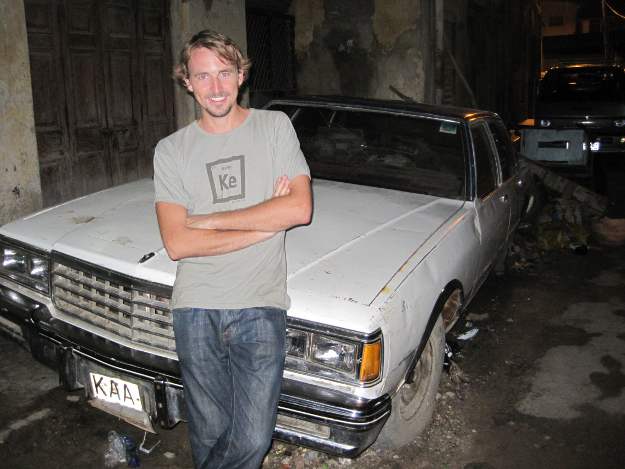 I can’t remember if I said anything about Philip, my Couchsurfing host in Mombasa. Everyone who comes in contact with Philip is taken by his infectious positive spirit. He should work for a suicide prevention hotline or Microsoft customer service, which is kind of the same thing. Fast walking, upbeat, the kind of traveler you want your kids to grow up to be with amazing travel stories: rolling along eastern Ethiopia in a locked dark railcar, going eight straight days on a bus to get to South Africa for the World Cup (despite not being a soccer fan), fasting in solidarity during Ramadan in Yemen, etc.
He and his roommates all work for Camara, a for-profit company working to build a sustainable model for technology to further education in Kenya and other countries.
I think Philip has had multiple Couchsurfing guests for 3 or 4 weeks straight. He’s very selfless that way. One Couchsurfer from Scotland, Luke, hitchhiked to and from Nairobi. He was smart about it, having a master plan to start late in the day so he could arrive in the morning (though in this case it took 24 hours.) He told an interesting story about how if a trucker has a flat or some problem on that bush highway, he will place his truck in the middle of the road stopping traffic on both sides so it will be too busy for animals to think about coming to eat him.
Is anyone interested in hitchhiking anecdotes or is it the travel equivalent of baby pictures? 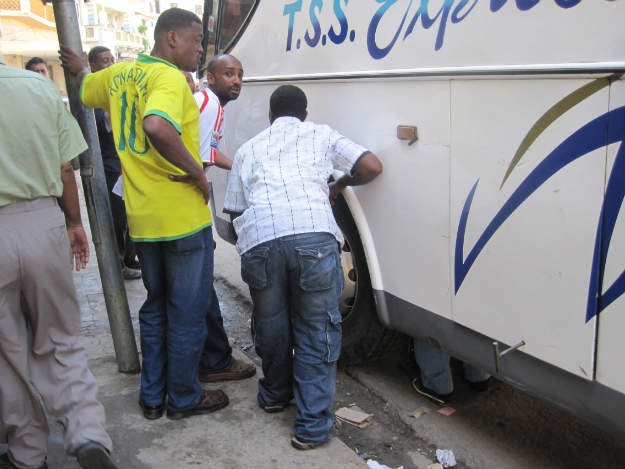 My tired driver looking back at me and four legs standing under a bus, below 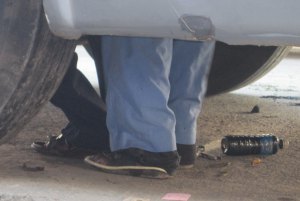 My first and last bus rides in Africa were most unpleasant. I could have anticipated all of it. I knew the bus from Mombasa to Nairobi would be cursed when I saw the driver’s dozy red eyes—his assistant on the bus insisted, “He’s fresh!”—and then two(!) pairs of legs standing under it.
Both my stomach and the bus broke down a few times. I felt very nauseous after my biryani lunch which seemed deserved because why would I have biryani if I am going to India in a matter of days?
At the lunch stop I wandered over to talk to the guy working the gas station, and when he found out I was American he leaned close and quietly told me that no Muslim believes Osama bin Laden is dead. No one else for 20 meters was around, but his boss was Arab and he wasn’t taking any chances. He believed it and mentioned the 1998 U.S. embassy bombing in Nairobi that killed 200+ Kenyans, but no Muslims do, especially without photos, and that’s all they talk about, he said.
I read a snippet that said that the photos were too gruesome to be released, but are they really worse than what anyone can see in an R-rated slasher movie? Everything about the aftermath mystifies me: burying Osama at sea, the celebrations in America as if something had come to a conclusion, the photos, and the last report I saw was the discovery of porn in his hideaway. The government picking and choosing details to release in an effort to try and build sympathy only seems to foment distrust.

The bus broke down one last time just on the edge of downtown in the middle lane of a three-lane main road, clogging traffic. The driver simply went walkabout without a word to anybody, abandoning the bus. Talk about contempt for your passengers!
In Nairobi I went back to Camel Milk Central to recuperate quickly and watch a cut of their movie, “Hot Chocolate for Bedouins”. It’s a talented bunch of people. Buy stock in their futures.

This is some random stuff just for me to remember, kind of like talking to myself. This will be extremely, extremely boring for everyone else. Go take a nap.

Some things I will miss in Kenya:
—The security guards who wear little league baseball batting helmets. How did they get them? Can’t say, but I once came across a second-hand shop that had scads of hockey equipment, so anything is possible.
—The trees: baobab, jacaranda, mango, acacia, etc. Trees make all the difference in the world. Think of the worst places you have been to, and I will bet there weren’t many trees there.
—“Jambo!”
—I will miss not understanding fully the M-PESA system where Kenyans can make payments for seemingly everything in life through their cell phones.

More randomness:
—Sometimes I ask people what their tribe was and then if they thought of themselves as their tribe first or Kenyan first. They always answered Kenyan, but said that most people don’t think like that, especially in politics.
—Day laborers have nothing in their hands after work.
—I still do double takes when I see white people or see lots of people dressed in form-fitting clothes for the first time in three and a half months. (I meant to write this in the beginning of my time in Kenya.)

—It’s a sad feeling to leave Africa, leave new friends (a one-way feeling! ‘Kent who?’), leave before I saw new places and gained a better understanding of this region. (sniff!)