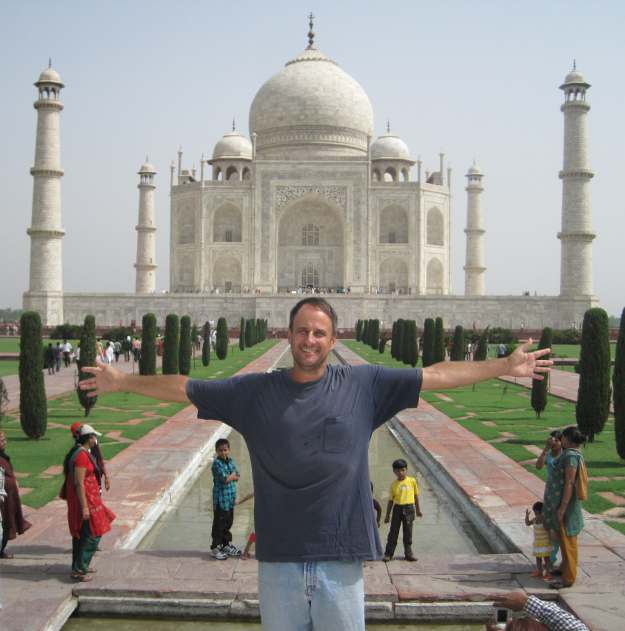 How hot is it in India? It’s so hot there is a fan in the shower! I rest my case.
I can’t remember ever drinking so much water in my life. I am sucking in a swimming pool of water every day and my urine is still dark yellow.
Oh! The Taj Mahal! Yes, isn’t it pretty?
I met a French girl here in Agra who didn’t go see the Taj Mahal, just as Philip, my couchsurfing host in Mombasa, Kenya, had been to Cuzco, but not Machu Picchu. I like that against-the-grain inner strength.
The thing about the Taj is, the inside is nothing special and the outside you can see clearly from every rooftop of every guest house in the tourist ghetto. Of course, you are a distance away, but you do see it.
750 rupees is about $17, but more to the point, more than a day’s traveling for most people, two days for some, three days for the truest of hippies, and four days for the real sadists. On a big trip—and just about everyone in India is on a big trip, except for me—paying the money and making your trip one or two days shorter is worth it. However, at what point do you say, “Enough?”
Again, I think most people would think this argument is absurd. You are halfway across the world, making a big effort to be here, and probably not coming back. Pony up the money and see it, one of the most beautiful buildings in the world. All I am saying is the Taj Mahal is fantastic, but it doesn’t have to be for everyone. Taj smaj! 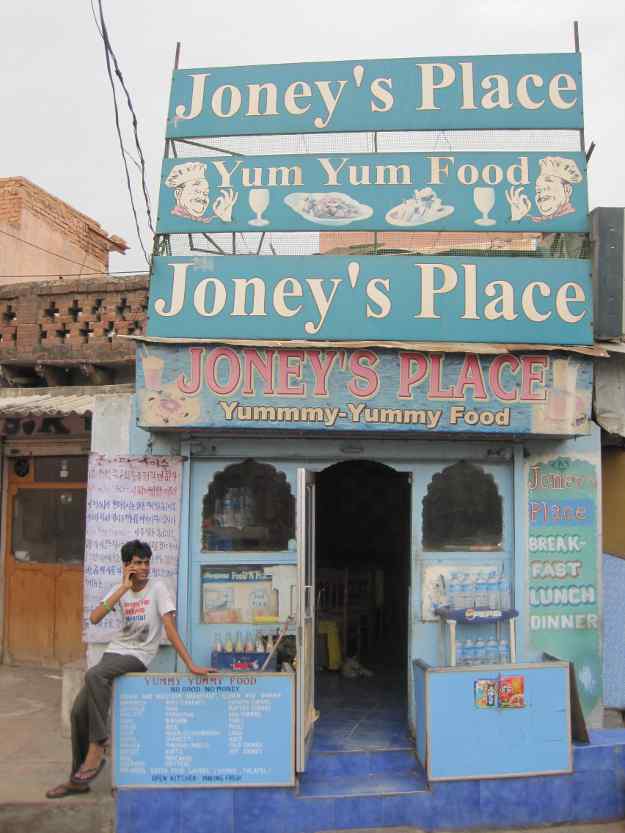 I had to make a pilgrimage to Joney’s Place, one of the memorable experiences from my first trip to India. He had a restaurant literally the size of a small closet, so small that he had to lean outside to cook from a jerry-rigged stove that was connected to the outside wall. The setup is still the same, but now he has an indoor area with four tables.
We reminisced about the good old days back when the Taj Mahal was 2 rupees to get in. I reminded him that he was popular with travelers for his bang lassis, which are no longer on the menu. (I think the “bang” is marijuana, but how you mix it with a dairy product is a mystery to me.) I brought this up and the room became quiet, and soon enough I learned that the two young guys working there were actually his 17 and 18 year old sons. I had put my foot in my mouth. You stay classy, Dromomaniac.
The other thing about Agra back in the day was the legendary Sikh Tandoori Chicken Man. Buzz about him had spreaded so that by the time you came to Agra, you had already heard about him. Even though he was in a far-away part of town and his restaurant was an empty garage, he was worth it. Nowadays it would be hard to convince other travelers to make that trip.
Last thing about the very un-PC old days before I put everybody to sleep: Lonely Planet used to advise travelers in India to fill the rest of their backpack space with toilet paper since it was hard to find and then the true hippies would counter that one really should get with local habits and use the left hand.

Room numbers at the Sai Palace Hotel in Agra are Uno cards taped to the door.

Since everything in Agra seems to be one big hassle and I am in no mood to be meek, I spent five minutes loudly arguing with a security guy at the Taj Mahal about whether my animal balloons were a security risk. He said if it popped it would scare people.
The battle at the Agra Fort was the slow motion of the ticket guy giving change. Ticket people will hope that you are so relieved at getting the ticket you had long waited for with “guides” breathing down your neck that they won’t notice if you don’t give change or don’t give enough change.

I broke my sandal. I found a shoe wallah (repairman) in a market, bracing myself for the inevitable drama. I asked him how much to fix it. He says, “As you like.”
I think to myself, “OK, brother, but prepare yourself, because that guilt trip trick isn’t working on me.”
I give 10 rupees (about 27 cents). I can’t imagine a local giving more for something that takes 5 minutes of stitching. He isn’t pleased. I walk away and 10 minutes later the sandal on the other foot breaks (which perfectly illustrates my time in India: broken sandal twice after bird droppings on my shoulder after ripping my pants after a cough coming on after ticket guys doing the slow count when giving me change after wandering around in a daze in the midday 44C heat after…)
He fixes it and then is angry when I give 10 rupees again, howling something in Hindi at me. I am unmoved and throw down the money.

Should I just have paid 20 or 50 rupees each time and avoided the hassle? Life is too short?