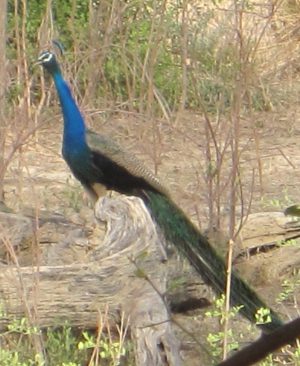 Fatehpur Sikri is an old deserted sandstone city (as opposed to those new deserted sandstone cities) only 40km away from Agra, an hour on the bus, I read, but the Indian travel gods are avid readers of my blog and they made it a three hour slog via a diversion from the main road. The narrow side roads couldn’t handle the heavy, two-way traffic, which meant a dozen stops with a dozen Indians every time arguing about how to clear the mess. At one particularly long traffic jam I went looking for water and some villagers, very abuzz with seeing a white man in these parts, offered some sweets, a place to sit and rest, nice smiles, and I was so taken I thought of looking into what kind of dowries I could expect, settling down—but then the traffic moved and I had to make a run for the bus. I regretted it since I was going berserk from the horrendously super-loud air horn mounted INSIDE the bus that the driver used liberally and with impunity.
Everything about the bus was debilitating to the psyche, so after I toured Fatehpur Sikri I hitchhiked the next 40km to Bharatpur. Hitchhiking in the midday 110F heat (43C) was easier than I thought: a kid on a motorcycle, then a gift from the gods, an air-con car, then another guy on a motorcycle, all nice guys, none even asked for money.
I disliked Bharatpur at first brutally hot and dusty sight, but it grew on me with its sincere people. No hard sell, just friendly hellos, where-are-you-froms and are-you-marrieds.

This is a conversation in Bharatpur:
Rickshaw driver: “Hello, rickshaw?”
Me: “No thank you.”

It could be funny if it was the only encounter like that, but the moment he is gone another rickshaw guy is all over you and the same exchange happens. It is all day, every day in Agra not only with rickshaw guys, but shopowners, restaurant touts, beggars, etc. It’s draining. And that’s just the people you don’t want to deal with. The people you need to deal with at train stations, small shops and hotels can also be just as challenging. Then when you get bamboozled the first time you think, “Well played, India, well played. That’s India 1, Kent 0,” and you become always on guard for the next shyster. It’s part of the travel experience, but cumulatively it can take a toll and you want to strangle someone.
India takes a long time to get used to, if you ever do, and is the only country in the world where you meet another traveler and they say, “How long have you been here?” and you say, “Two months” and they say, “Oh, you just got here.” It isn’t a boast or a denigration, it is an acknowledgement that you aren’t in the swim of things yet.
Agra is a big tourist town, so you have to expect the attention, but who in their mind would be in Bharatpur in the eastern part of Rajasthan state, the hottest state in India in the hottest month of the year? Everyone is too dulled from the heat to make a fuss about me. 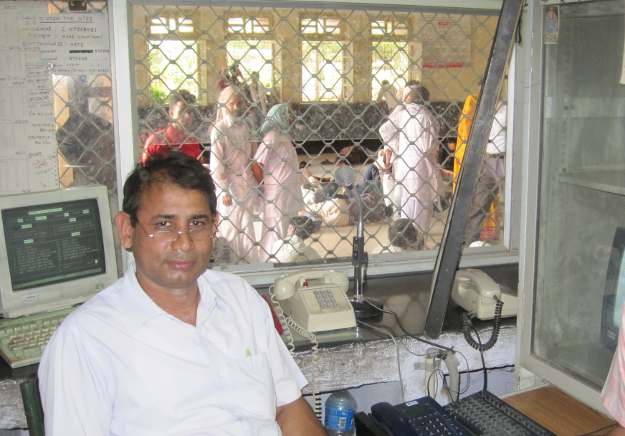 This guy above is everything that I love and hate about India. He works at the “Enquiry” office at the Bharatpur train station. I love that he theoretically wants to help me, and that he lets me sit in his office and he even lets me take pictures as a wandering earwax specialist(!) is digging a homemade Q-tip scarily deep into his ears (and then chucking the filthy cotton tip over his shoulder, not caring that I am over his shoulder. I don’t love that part.) I love seeing these crazy things all rolled into one scene. There may as well have been a cow in the office, wafting incense and a Bollywood movie in the background. 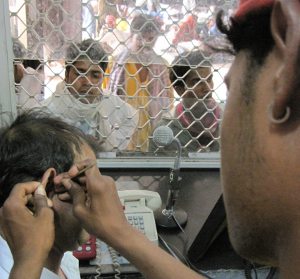 I hate that he picks up on only one or two words in my sentence and runs with them, rendering me unable to stop him. (This happens all the time in India.) He shows me something on the computer and repeats himself over and over while I try to tell him I understand and want to move on to my question, but he is still fixated over repeating the first thing to the point that I am practically screaming for him to stop.
And then he makes me laugh. He has ignored everyone behind him at the window and soon there is a scrum of people yelling for his attention. He turns and the first kid in line asks something. He stares at the kid as if thinking about the answer, but then swivels back to me to ask why I’m not married, completely blowing off the kid. It was such an extreme show of contempt and disrespect that it was funny. Less funny for the kid. 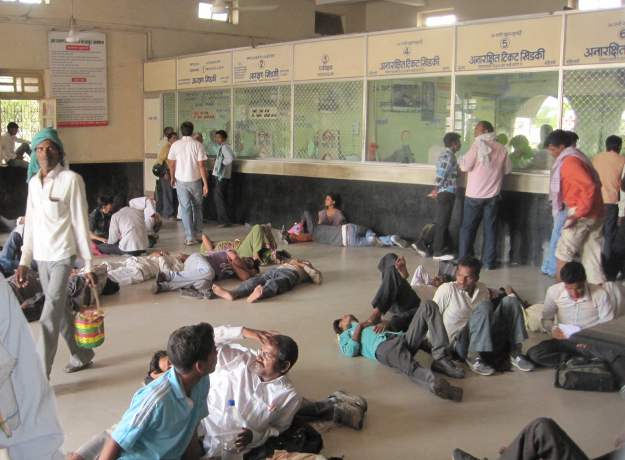 People dozing and resting in the ticket hall

I’m not doing a good job of explaining how India is different from everywhere else, but it’s just one of the craziest places in the world, completely unique. How many unique places are left in the world? That fact must be one of its attractions.
So how do you cope with India? By watching the first thirty minutes and five seconds of the the movie, “Scott Pilgrim vs. the World”, which Banksy gave me. It’s nothing less than pure cinematic genius. Just watch the first ten minutes and try to tell me your life hasn’t changed and you aren’t ready to move to Toronto.