Ask any traveler what their favorite place is in India and they will always say a small town (or a unique place like Varanasi) such as Hampi (my vote) or a northern hill station. When I was in Kolkata (Calcutta) I heard its praises sung, but they were from the same people who never left the backpacker street ghetto where they took tea ten times a day and then retreat to the hotel rooftop to read their books away from the teeming hordes below. The most hated place in India is probably New Delhi, but I have less confidence in that assertion.
Sawai Madhopur is another simple, small, non-touristy place in the mold of Bharatpur with minimal hassle—and this weird statue to the left. The main reason to come here is for a safari in nearby Ranthambore National Park to try and see the last few tigers left in India. Of course, we wasted half an hour for a group of Indians to finish arguing about the reservation they made, making the mistake of trying to get me to sympathize with their beef about the driver (“This rascal here…”) I was ready to throttle all of them.
The safari would be a nice little drive in different circumstances, but do you know the old movie, “It’s a Mad, Mad, Mad World”? Near the end is a wild car chase between two cars full of people. A safari is just like that but with more cars. The drivers are all trying to get the best views so they pass on either side, clip each other’s side view mirrors, back into trees, create plumes of dust and make a nuisance of themselves. Why a tiger would want to hang out in such an environment? 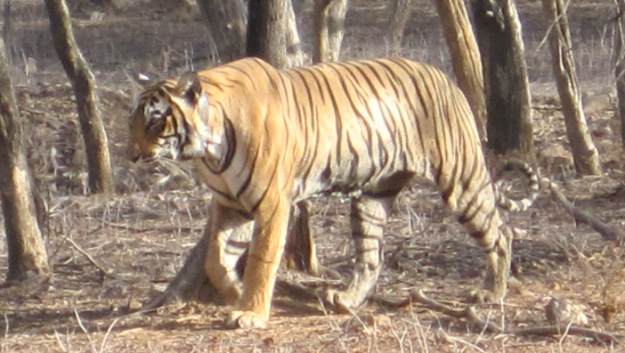 Nevertheless, we saw a tiger and it was very impressive. So big! I felt very vulnerable wedged in the corner rear seat, but the tiger didn’t sense I was good eatin’. I bet I am very tasty. It did get very near to one jeep, uncomfortably so, and the driver had created a problem by not having a way to get out if the tiger lunged, not that there would have been enough time to escape, it was so close, but the tiger just walked on by without a look or a sniff.
The guide made a big deal about seeing black boars, but there are dozens wandering the streets of Sawai Madhopur at any hour scavenging for food. More interesting are the horse-sized samba deer below. 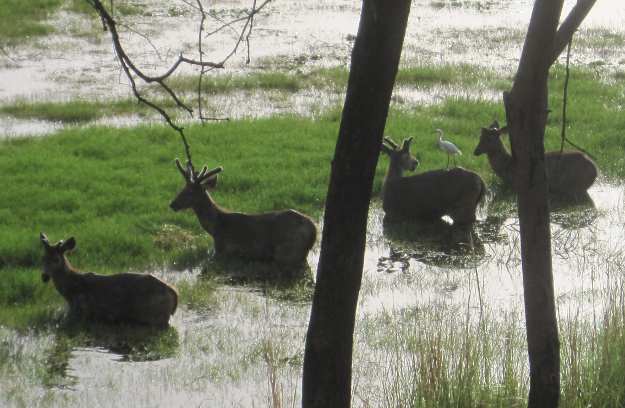 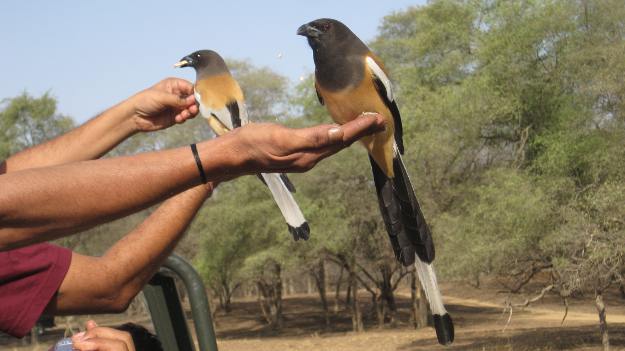 When you ask an Indian a yes/no question often you don’t get a verbal reply, rather the world famous Indian head wobble. It is an enigmatic bobbling of the head that is neither a nod nor a shake of the head, but a kind of hybrid of both, leaving you confused as to its meaning. It was either Paul Theroux or Pico Iyer who said that it was like they were trying to pour water out of their ears.
I love the wobble and pride myself on being able to do it well. I love everything about it except when I’m actually in India and need to know the answer to something. That’s when I want to grab them by the throat and say, “YES OR NO! TELL ME!!!”