If I were a professional blogger, you know, the kind of guy who has advertising, sponsors, links to everyone else’s e-books, etc., I wouldn’t be lumping the three or four things I want to talk about into one post. The pro way, paying attention to Google Page Rank methodology, if I understand it correctly, is to make separate blog posts with the right search engine friendly titles and headings. But I just want to attack it all in one post, hopefully with some succinctness. Let’s go!
Looks like in my next update of the rideshare part of my website I will need to rave about covoiturage.fr as much as I do about the version for Germany, mitfahrgelegenheit.com. I used it three times: coming and going from France and once domestically with drivers from Guadaloupe, Brazil and France. All went well despite one guy leaving two hours later than he said. That’s a risk you always take with rideshare. My French is bad, but I can figure out how to register on the website, takes no more than a couple of minutes and you can immediately get someone’s phone number or email them to take advantage of it right away.
I paid 24 euros to go from Tienen, Belgium to Paris, 15 euros to go from Paris to Caen, and 40 euros to go Paris-Geneva. Trains in France can be cheap if you can book, say, two weeks in advance, but I never know what I am doing with my life day to day. 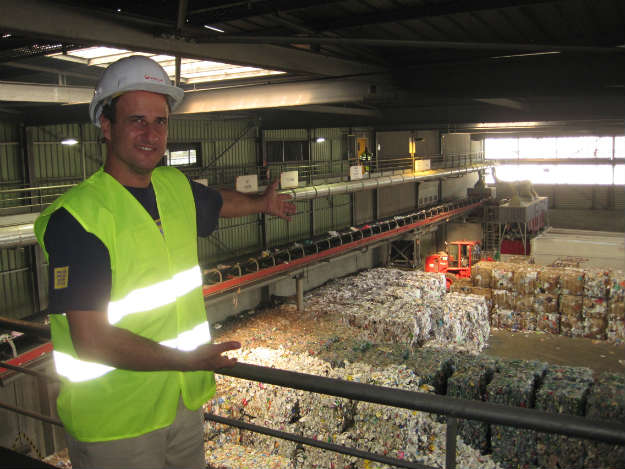 What? You don't go on tours of recycling centers in every city you go to? You don't know how to live, Brother...

I’ve done the drive between Paris and Belgium a few times now. I think most Frenchmen are dismissive of the flat, featureless north, but I find it evocative. From the moment I cross the border I feel like I’ve entered a pre-war black and white photo. The land isn’t fallow, but somehow feels like it to go with a heavy languid, bucolic, lazy quietness. Even the highway signs and the font of them (which I unhelpfully don’t have a photo of) give it a special character.
I arrived in Paris like I always do, feeling severely under-dressed. I stayed with friends in the suburbs and found myself on babysitting duty for a couple of nights for these adorable kids. I read bedtime stories to them in my faltering French while they stared at me blankly, but they begged me to read again to them the second night. When I claimed that my French was too awful, the boy gave me the ultimate compliment, saying that it was “pas grave” (OK).
Even though I can see myself making great strides with my French if I stayed longer in France—and I would love to stay longer in France, let’s state that publicly for historians—the vowel diphthongs really throw me for a loop.

The precocious boy, barely six years old, takes fencing lessons. France is the best. My friends think he has a possible future as a chef. When I was last here about two and a half years ago, he was critiquing his mother’s cooking (“It needs more salt.”)
The father (everyone is very nervous about being outed by name in my blog; I tried to assure them that no one reads it), like most people around the world these days, can effortlessly go off on all the things he dislikes about America, but he also wishes his kids would live in USA for a number of years. He told me very eloquently about how Americans have high aspirations and he wants his kids to feel like they can do anything in life. His impression was that a young American dreams of starting the next Google where a young Frenchman dreams of a safe job working for a French multinational corporation. His eloquence is lost in my retelling, trust me.
It reminded me of a conversation I had with an Italian when we read the story of how Hewlett and Packard started their company after tinkering with electronics in their garage. She said it was unthinkable that the same could happen in Italy. I still don’t understand that how can be, but I haven’t spent enough time in Italy either.

My friends in Paris always rag on me for being so Paris-centric on my travels to France, so this time I visited the port town of Ouistreham on the Normandy coast as well as where the beautiful people live, Cabourg and Deauville. Apparently, I was extremely lucky with the weather and it never looks like this.

This nut ran a small restaurant in a small village (as opposed to those giant villages) in Normandy of 140 people. Before I left Paris, as if preparing me for leaving the nest, I was taught an old French expression about food tasting good: “Le petit Jesus en culotte de velours” which translates loosely as, “It’s like the good lord sliding down your throat in velvet pants.”
Unfortunately, no one had heard of it, but I don’t care. It’s so good, I am going to use it all the time now. In fact, with Google Translate, I might start using it in every language.
I had all kinds of memorable things to eat in France: a sublime raspberry tarte with a light meringue crust behind the Madeleine church in Paris, a simple, fantastic comte cheese, and, as always, things I didn’t know the names of at the time, which is always for the better, like this below:

This is 'salade de gesiers' another one of those things that sounds beautiful in French that is lacking in English: 'chicken gizzard salad'. Agree? This is served on a plate of slate. Yes, slate, like what some houses in Europe still have on their roofs.