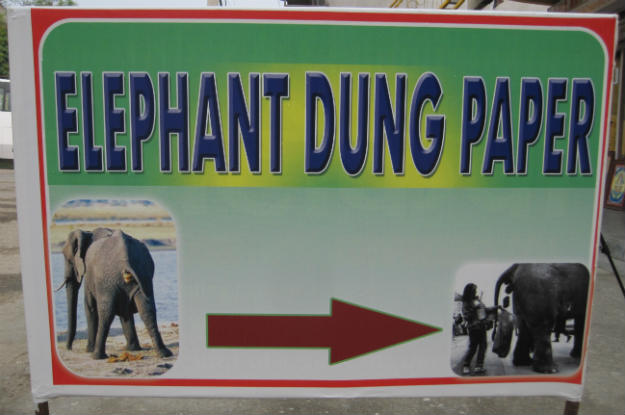 How clever! Can there be more of a no-brainer gift? It's unique, lightweight, odor-free, useful and (I assume) promotes local industry. Plus, they'll never be able to say that supplies are limited.

As the bird flies I am only 15 or 20km from India in the lowlands of Nepal in a quiet and leafy part of Sauraha, a three-street village that is next to the Chitwan National Park. It’s great to be out of Kathmandu, but its cosmopolitan food nature has followed me. Sauraha has maybe 10 restaurants that announce they “specialize” in Mexican food. How many restaurants in rural Mexico specialize in Nepalese food? 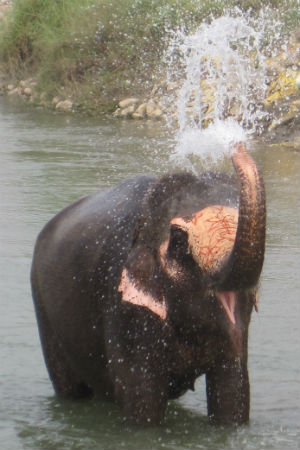 How can an elephant not be in someone's Top 5 Animals? Let me put it another way: dating is OK, but don't marry anyone who doesn't have elephants in their Top 5. You'll thank me later for this.

After 10 days in Nepal without a drop of rain, suddenly it storms for two days, the newspaper reports it is unseasonably cold, saying that winter has arrived early, and 3500 tourists are stranded in Lukla airport (the gateway to Mount Everest) desperate to get out like it is 1975 Saigon.
I don’t have it so bad. My only problem is that all of the elephants have been reserved and I can’t do a little safari in the national park tomorrow. I can’t complain.
Before the rains came I met a couple of European girls on a trail near the river. They had just seen a rhino and were going to go back and show me, but we had only taken a few steps when it was suddenly closer than before, rustling behind some thick grass, and we had to hightail it out of there. They weren’t as phased as I was; someone had told them that rhinos can only charge in one direction, so if you run around like Benny Hill you’d be OK. 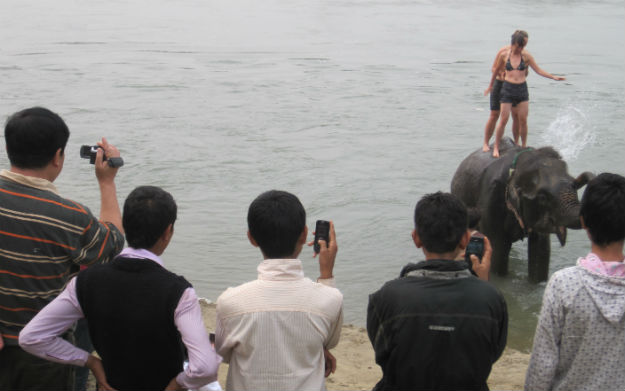 Every morning a bunch of elephants come down to the river to bathe and to let tourists sit on them for a nominal fee. The mahouts then make the elephants throw water back on whomever is sitting there, and they have another command to make the elephant lie on its side, throwing the tourist into the water. Good fun. The water must be pretty filthy, but what's a little dysentery on your vacation? Since every tourist knows they're going to get wet, they dress accordingly, but Nepalese aren't used to seeing so much flesh and they hang out to watch. And film.

I walked a good 3km towards the elephant breeding center, but didn’t want to miss feeding time so I hitchhiked the last bit and the first car that passed picked me up. Actually, the first car to pass was an ambulance, and I dumbly didn’t extend my thumb. Sure enough, the guy looked at me longingly as he passed, like he wished he had a reason to stop for me and I would have had my first hitchhiking ambulance ride. I’m so stupid sometimes.
On the way back, again the first car to approach picked me up, this time a bus full of Nepalese students, very excited to have me aboard, though most of the ride they tried to understand why I am not married. 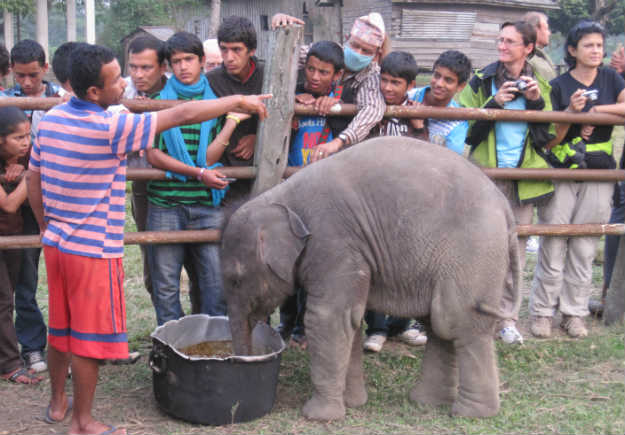 The elephant breeding center has a bunch of shackled elephants and would be a waste of time if not for the cute baby elephants hanging around. 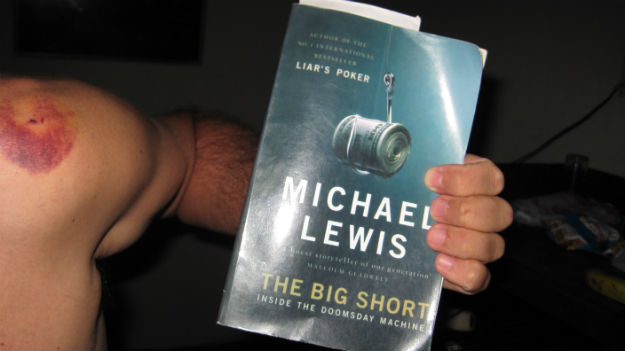 Here I am combining two things into one photo, saving you, the reader, time. And I blog for free! Incredible. The book looks normal at first glance, but the entire thing is a photocopy. Bought it on the street in India for about $1.25. I feel like I should be sending Michael Lewis a royalty check. The hefty bruise on my shoulder? I have no idea how I got that.