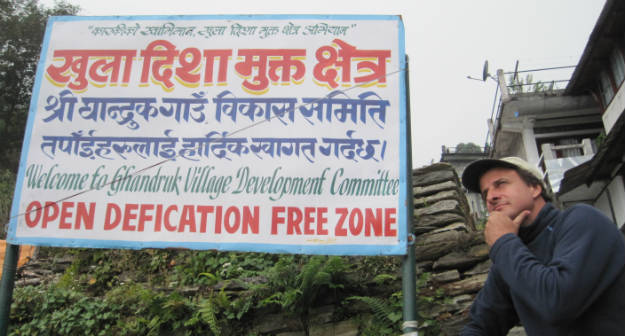 In deep thought over the meaning of this sign

I went on a four-day trek in the Annapurna mountains with an old friend, Greg, he of the renowned Hoshi Boshi Lodge in Nagano-ken, Japan, available for rent at reasonable (for Japan) rates. (By the way, have you ever thought of owning a 10-room hotel in the Japanese Alps? He is open to offers. What’s that you say? Radiation? Come on! Live a little, people!)
We had thoughts of going up to Annapurna Base Camp, but the weather wasn’t good, so instead we were satisfied with the popular triangular circuit of Nayapul/Birethani to Ghorepani to Ghandruk and back. Four days of about four hours hiking a day, going up 1700 meters (about 5500 feet) and back down. We went at a pretty quick clip and since I have no sense of pacing myself, if there were no German bakeries, we rarely stopped.
I knew there were going to be a lot of people on the trail coming the other way who hadn’t heard a shred of news for a long while, and I was eager to find Italians. I eventually found them, overhearing a group babble to each other—am I the only one who thinks Italian sounds like a baby language?—and I announced, “Berlusconi, he is finished!”
One man became excited. “He is dead!”
“No, no, no, he resigned,” I said, but even this brought big smiles all around and the man said that it was the best news he’d heard in 20 years. The Dromomaniac, out to spread joy during the festive holiday season! 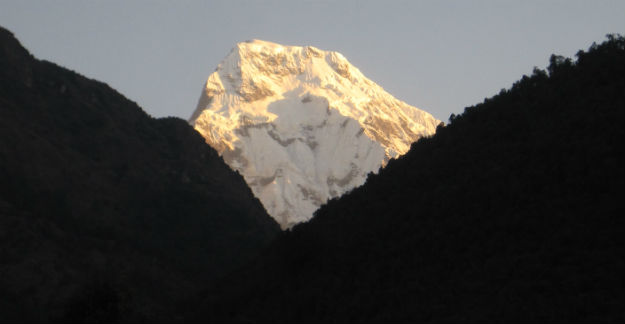 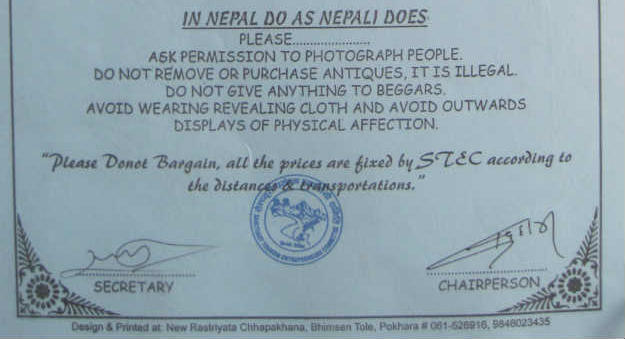 This was on the back of every menu we saw. It seems a little heavy-handed to tell us not to bargain. Order your food, shut up and nobody gets hurt! If you can't make out those signatures at the bottom, the Secretary is Fat Tony and the Chairperson, Louie the Lip.

It was probably a mistake not to bring a jacket, but I hardly needed more than a fleece. I certainly didn’t need the sleeping bag I had rented. It was only 50 rupees (65 US cents) a day, but the weight was unnecessary, and it’s all about the weight. Every lodge has a mountain of blankets. Some smell riper than others, but they weren’t bad.
Cotton shirts were a bad idea. Greg says they are the “death fabric” which I now fully and completely believe, but it also sounds like the beginning of a Monty Python skit. 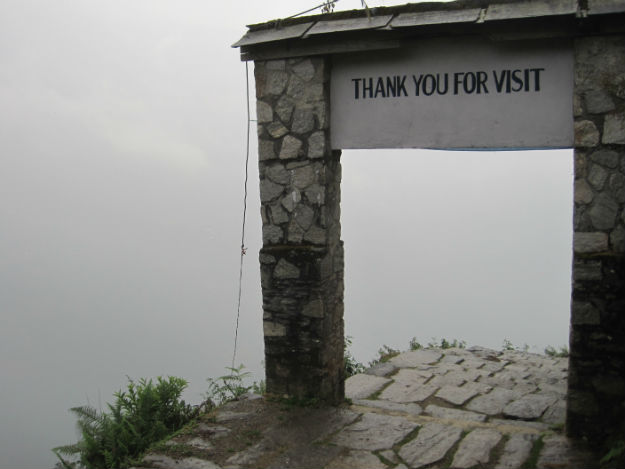 Ghorepani (meaning “horse water”) is two days walk from the nearest road, but they have internet (not to mention lasagna, enchiladas, Hungarian goulash, etc). I even saw a traveler with a laptop!
I felt for the porters who had to carry up the computer monitors and towers, the poor saps. I also saw a nice pool table in Ghorepani and asked how that was managed. The proprietor said it was brought up in pieces. There still had to be some big pieces, and to schlep that 1700 meters upward? No thanks. The most amazing porter story I heard was 10 people carrying a huge German industrial oven up the Langtang mountains. Would love to see a photo of that. 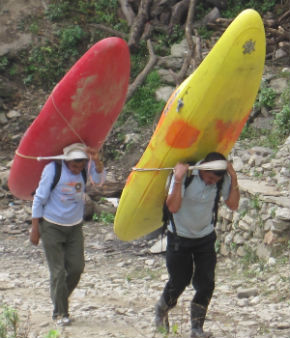 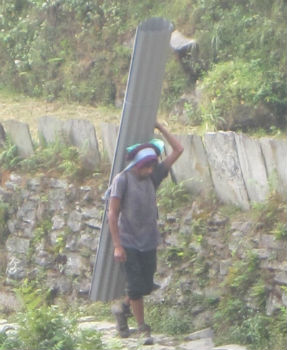 The porters and whomever made the stone paths, steps and walls are true heroes. The ease of doing a trek like this is possible because Nepal is impoverished, one of the poorest countries in the world. These are called teahouse treks because there are lots of lodges along the way to sleep which exist only because there are porters willing to carry everything up for a song. Their hardscrabble existence helps make my stroll in the mountains easier and more enjoyable, I can only deduce.
The nearest comparison to this might be Switzerland, but supplies aren’t carried up on the backs of people. I don’t know, maybe they once were, but I doubt it. I haven’t thought it all through. I will have more time to ponder this because…
…even though my calves are still tight days later, I have my permits and extended my visa to go back to the mountains again. Again! This time I am going to try the Annapurna Circuit, a 12 day or so trek that takes me over a 5400 meter (17,000+ feet) pass. Cold! I need to get out of town and on the trail because I don’t want to risk winter coming early and snowing me in.
Ciao for now! 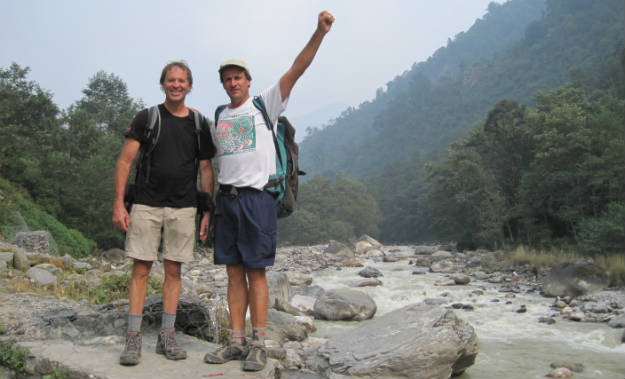 Back at the starting point after four days, triumphant