I see a trickle of white people in my beloved Ee Beng Vegetarian Restaurant, which is the beginning of the end. Nothing good results when white people start horning in. My Irish friend, Philip, counsels me indirectly that I shouldn’t try and keep Ee Beng as my secret and hope it resists all external forces. Enjoy it, sing its praises, and then set it free.
What a dolt.
Actually, Philip is one of the most memorable people I have ever met. I stayed wth him as a couchsurfer for a week in Mombasa, Kenya earlier this year and now he’s on a short trip around Asia. Philip’s an amazing guy, but you’ll have to trudge through my Mombasa archives if you want details about him. 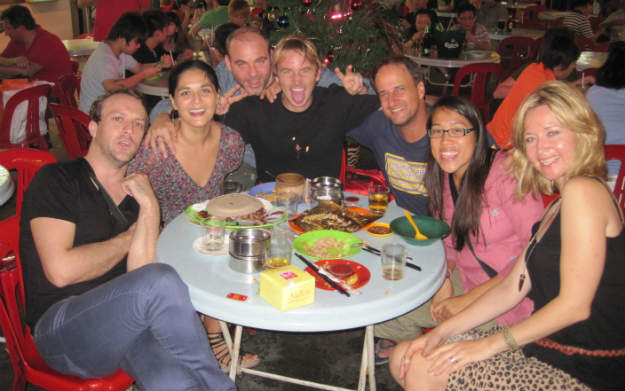 Philip is in the black shirt in the middle, the Chinese girl is the Chinese-looking one.

The Irish, in fact, I find to be inspiring. I met Philip with his Irish friends here and realized I don’t spend enough time with Irish people. Maybe the notion that they are solid, salt-of-the-earth types is something that has been so true for so long that it becomes a cliche and then, therefore, ultimately, must be untrue.
I once lived with a teenage Irish girl a few months in San Francisco. (Wait, that sounds so scandalous; let me rephrase it) I mean, one of my housemates whom we chained to the kitchen to cook for us and fed table scraps once a week (OK, that’s better) was a teenage Irish girl, and she was impressively mature for her age.
However, if you ask one Irish person about another, there is a reflexive cavalcade of derogatory obscenities, which is their perverse way of showing affection.
Since I know only a few Irish, there is a strong chance that I might not know what I am talking about. Let’s move on. 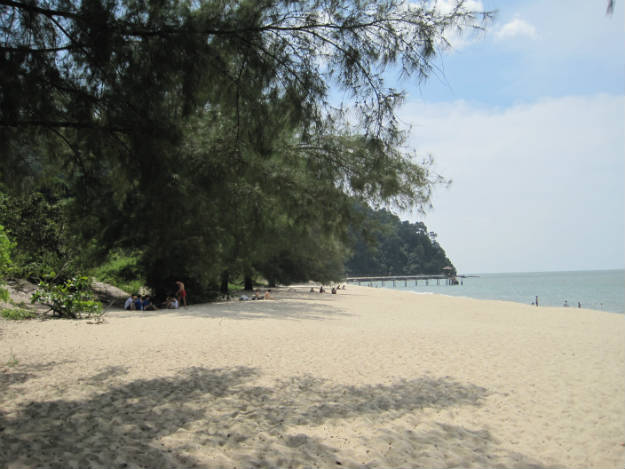 I was at my regular morning transient soy milk guy when I met a Chinese-Welsh(!) girl named Emma. After some small talk and noodles, we decided to go to the national park together. That is a funny thing about traveling. If I were in Wales and proposed we go anywhere or do anything together, she would have made like a bank teller about to get robbed, which is smile sweetly while surreptitiously calling the cops, as I am 20 years older and need a hot shower desperately. But here, at this particular moment, we are a part of the same brotherhood of semi-clean travelers.
It was cantankerous from the start when she said the food in Penang wasn’t good. I was apoplectic. I cut her some slack since she was Chinese, but in the process of checking her food bona fides, I discovered that despite being from a family that has owned a restaurant all her life, she can hardly use chopsticks. Shocking.
The bus to the national park is cheap but takes too long so I proposed we hitchhike back to town. I feel responsible for any girl who hitchhikes with me, though I forgot to give Emma the speech about her being last in, first out of the car. We got a ride easily all the way back to our hostels.
The next day we went for a walk up Penang Hill, avoiding the funicular on health and cost grounds. (If there are cheap travelers reading this, you don’t need to pay 30 ringgit ($10) to take the funicular up Penang Hill. You can hitchhike on the access road next to the botanical garden.) Halfway up, we got caught in a storm and huddled under a small shelter off to the side of the road, but the rain wouldn’t stop and it felt like the end of “The Grapes of Wrath” where the water rises inexorably, and we decided to hitchhike in any direction. I made Emma put her long hair down—was that wrong?—and when we heard a car, we ran out to the street.
One of the first cars stopped, a Malay guy who said he was going to his house and that we could dry off and have some tea there before we continued. I wanted to be anywhere but here so we sat in the back of his truck getting soaked for an uncomfortably long distance. Where was he taking us? I’m responsible for this girl and we are suddenly going down Batcave paths where I have no idea how we’d get out. But the magic of travel shined on me again and we were led to paradise. 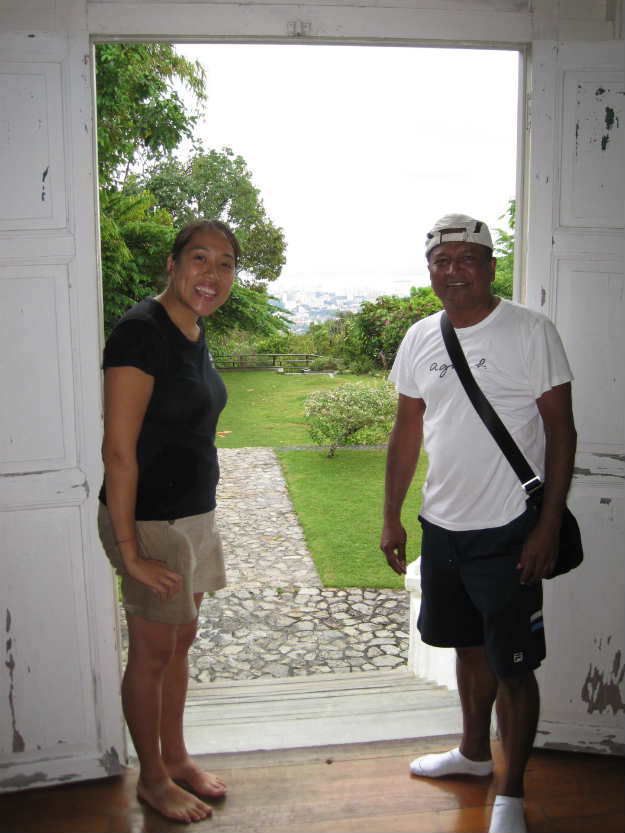 Emma and our generous ride. Emma's the one on the left. 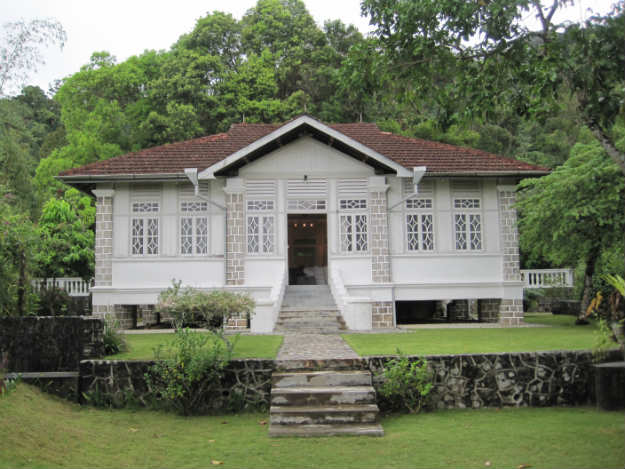 This house was built in 1920 and had twenty acres, much of it durian orchards. It's a famous house, but I was too delirious to recall the details of its history. 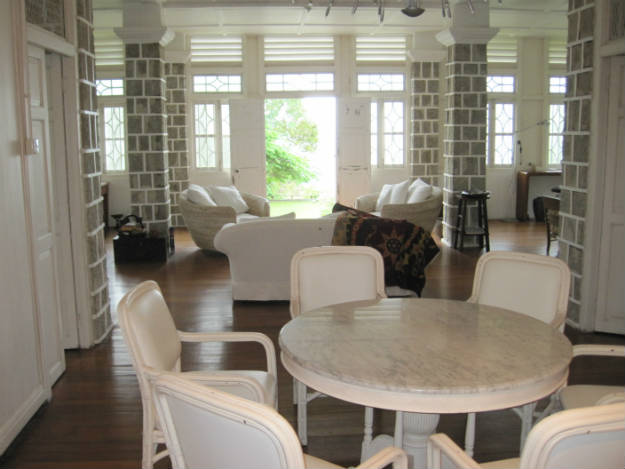 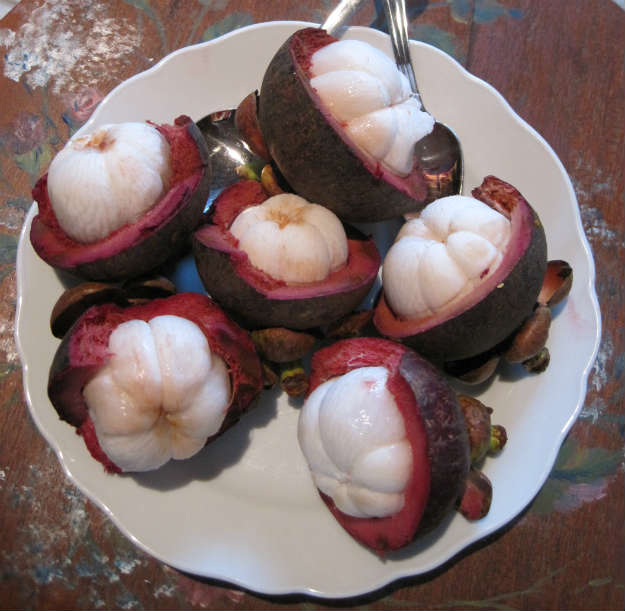 Definitely in my Top 5 favorite fruits, mangosteen, and these were some of the best ever.

Our savior offered us tea, beer, mangosteens and rambutans from his garden, a nice shirt, an umbrella, and couldn’t have been more generous. I spent half the time politely refusing everything, but the fruit I couldn’t pass up.
He lives in Uzbekistan(!) and trades minerals for a living, it seemed, but my curiosity didn’t overcome me since I didn’t want Anatoly and Sergei to show up and break my legs. He has houses in Provence, Bali, Kuala Lumpur, two in Penang, Uzbekistan and who knows where else. I did say for him to keep me in mind if he needs someone to watch over one of these properties.
With this luck I unexpectedly created a hitchhiking monster with Emma. She wants to hitchhike to everywhere from anywhere. We’d be standing in the middle of Georgetown on a busy street and ask, “Why can’t we hitchhike from here?" While very eager to try it again, she knows it’s a different game for a woman on her own, no matter how strong and independent.
I used up all my praise on Philip, but I have to commend Emma that, without much prodding, she is spreading the word about The Dromomaniac like my friend, Melissa, did the week before in Kuala Lumpur. I will shamelessly extol the virtues of anyone who gets the word out while I figure out how to do it myself. Emma has been active on her Facebook by liking links, emailing friends, mentioning it on something called whatsapp.com and even telling random strangers about it. I very much appreciate that, and before the gossip starts, there is nothing going on between us. Her boyfriend is flying in next week. With such promotion I almost expect him to arrive decked out in Dromomaniac accessories.
Hmmmm, that’s an idea…Dromomaniac merchandise, something for Christmas 2012!