I don’t remember the circumstances of how I wound up in Chiang Mai’s red light district. I believe I was searching for a new soy drink I’d heard about (that’s my story and I’m sticking with it!) when a beautiful Thai girl in a tight dress came up to me and cooed in my ear seductively, “I’ll do anything for 100 dollars.”
I’d been waiting so long for such an offer! I said, “Go redesign my website. Keep the clean look, make it scalable, SEO-friendly, and Facebook ready. Can you send me an outline by tomorrow morning?”
For some reason she didn’t appear enthusiastic. Flaky Thais… 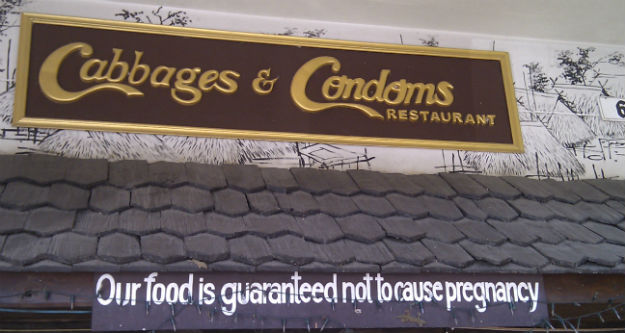 Cabbages and Condoms is a restaurant from a former Thai Health Minister.

I’ve made a circle of Chiang Mai-Chiang Rai-Lampang-Chiang Mai in northern Thailand. It’s incredible how many travelers are here, but Thailand is always crowded. It has been the place to go in Asia for a long time now. Coups, natural disasters, more restrictive visa policies—nothing stops the tourists from coming. Yesterday I heard a new alert from the U.S. government that there is a foreign terrorist threat for Bangkok and to not congregate where tourists go. Right. Good luck finding that place. There are dozens of locations where a terrorist could waste 100 travelers starting with Khao San Road (and does anyone have objections to that?) It was a typically vague announcement with no details just so the government can say, “Told you so!” if anything happens in the next few years.
In big Chiang Mai I’m not phased by all the foreign bars, the burrito restaurants or American college football games on TV, but Chiang Rai? It’s a small town of 61,000 people with not much to see, yet it’s crowded with travelers, too. I wasn’t prepared to see the skanky street of bar girls with old white guys eating hamburgers.
And then how can you explain Lampang? It’s a still smaller town with even fewer tourist attractions and hardly on the way to anywhere, two hostels were already full by early afternoon. I met one girl who was running around Thailand trying to find a mellow place to lay in a hammock, but she gave up and was off to Laos to look for it.

Even though Thailand is the beaten path, I love that there are still quirks you can readily see, like a five-piece band in cowboy hats performing, “Country Roads” in a hospital. I was in the hospital to see about getting a Hepatitis B vaccination which costs 680 baht, or about $22. (I will post a photo next week. I don’t trust inserting my pen drive or my camera cable into a very public computer and can’t figure a way around it.)
Speaking of quirks, in my first three days in Chiang Mai I heard the old 1970’s chestnut, “It Never Rains in Southern California” no less than four different times, twice blasted out from speakers in parking lots and twice by two different sets of blind musicians(!) playing in the same night market. It’s the weirdest thing. I had almost forgotten about it when in Lampang’s night market I heard it a fifth time in karaoke form from this guy below. He made a beeline to me, microphone in hand. We performed a duet to the horror of onlookers.

The night markets are a blast. There’s a regular night market in Chiang Mai that’s of only mild interest, but it’s the weekly markets that are far more interesting than I would have guessed. It’s also got weird bits, like a guy projecting Super 8 1950’s French home movies of a trip to Egypt. The fun comes from the inventive crafts and creative food, both inexpensive and very impressive. Again, photos soon.

My second time back in Chiang Mai I pledged not to stay at Supreme Guest House again. In my first visit the dragon lady owner took my passport to check me in and asked me with venomous eyes, “Are you Jewish?”
I told her no. I thought she was going to rant against Israelis, instead she went off about American Jews causing problems, being selfish, etc. I suddenly felt a kinship with Israelis being unfairly painted with a wide brush.
Even though I’m not Jewish, It upset me, but what to do? If I took every slight I receive on the road personally, I’d be an angry, bitter traveler, but how long do you stay a punching bag?