I went there. It reeked of cat urine, just like me.

Could I have hitchhiked down from Chiang Mai to Bangkok? I did it twice already in northern Thailand, once from the edge of a mall parking lot in Chiang Mai and once back from a temple in Lampang, both very easily.
A while ago I wrote about a young, handsome, blond German guy who tried to hitchhike in Thailand with no luck, which gave me pause for thought, but maybe he simply wasn’t doing it right. There is a correct way to hitchhike, and I’m a pro. I may not have any other life skills, but I know what I am doing when I hitchhike. Even if a guy was Young Kent Foster handsome—pretty powerful stuff—it doesn’t guarantee success. In the end, alas, the pro buckled and took an 11-hour, $12 bus to go down.
Before boarding I remembered the simple survival formula: long distance bus + Southeast Asia = cold. I brought my jacket. I haven’t worn shoes since I left Nepal over six weeks ago and I wouldn’t need a jacket either if not for the buses and trains, which are brain-freezingly frigid.
At every stop I begged the driver to turn down the a/c, and at every stop he mocked me for being cold. Meanwhile, everyone on the bus is dressed like they are ready to go sledding, though I am the only one who says anything. They must know the futility of asking.
Once in Bangkok I went straight to a Couchsurfing meeting. I love the euphemism, “meeting”, which sounds like there’s an agenda and urgent matters to discuss, but it’s purely a party. I arrived at about 8:30pm with the faint hope that someone could host me for the night. It may have been a naive hope, and imagine arriving in an overpopular, huge, crowded city at night and not having a reservation? I like the unexpected sometimes and went for it. 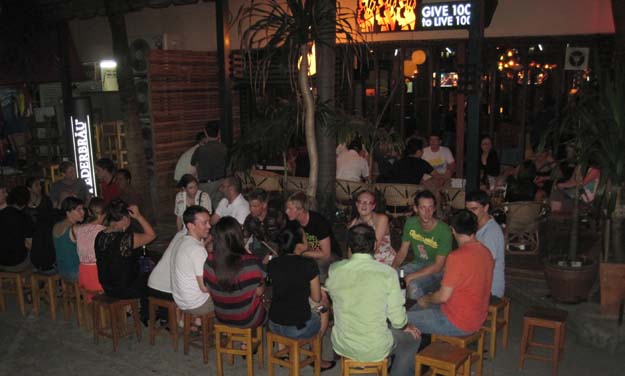 At its apex maybe 50 people were there. I was forced to take the minutes of this meeting in longhand.

At Couchsurfing meetings it’s easy to feel like a wallflower in the midst of the young and the beautiful and I momentarily wished I had instead gone to the Thailand vs. Norway soccer friendly nearby, but if you simply go sit next to anybody, they’ll introduce themselves and make you feel welcome.
In fact, I was talking with a British/Mongolian couple, the Brit had driven from Manchester to Mongolia in the Mongol Rally (check out the website; I love the spirit of it.) when the girl saw a well-dressed black Italian guy and said, “He looks interesting” and invited him over to join us. I am sure her interest had nothing to do with my epic stories of baseball card collecting in the 1970s.
I met two Iranians (In USA I’ve never heard Iranians call themselves Iranians, rather they are “Persians”. I’m going to start calling myself Prussian or maybe Mesopotamian—I wonder if I can get a Mesopotamian passport on Khao San Road?) and we started talking about Iranian cinema. I said I had met an Iranian actress named Golshifteh Farahani when I saw “Boutique” at the Tbilisi International Film Festival in the Republic of Georgia in 2005. That’s where I go to meet Persians.
I was informed that she went on to be in a Leonardo Dicaprio film, “Body of Lies”, and just this month, after doing a sexy photo shoot for a French magazine, she and her husband are exiles in Paris, unable to go home. I even saw a bit about it on Thai TV. She’s famous now. When I met her, she was like a bubbly, energetic kid. Here are a couple of photos: 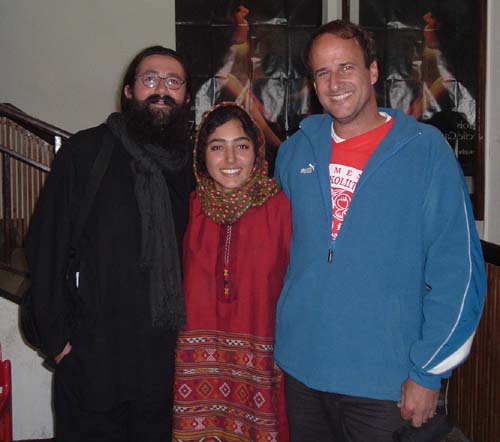 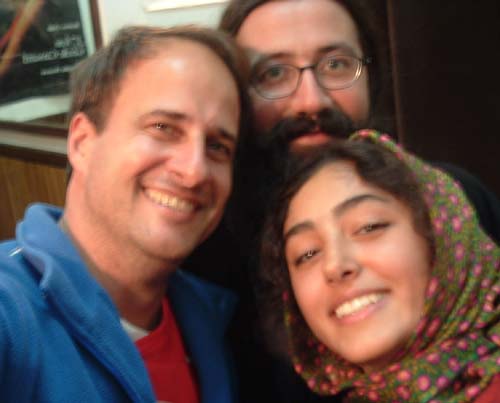 Toom was my Couchsurfing savior. He very graciously asked if I needed a place to stay and accepted me despite having seven(!) other guests staying that night, plus he was the organizer of the meeting. He lives in the northern suburb of Nonthaburi, which I was keen to explore, but the new Couchsurfing search tool makes it difficult to find him. It is a rant I will save for another time. Thank me later.
One day before I die I will have a place of my own and will open my home up Toom-style to accept anyone and everyone. I can see that to have so much traffic, even the most well-intentioned and considerate guests make a mess over time and it’s a lot of work to keep a place clean, but it doesn’t matter, I’m doing it, hopefully in a place where people want to come, like Mesopotamia. 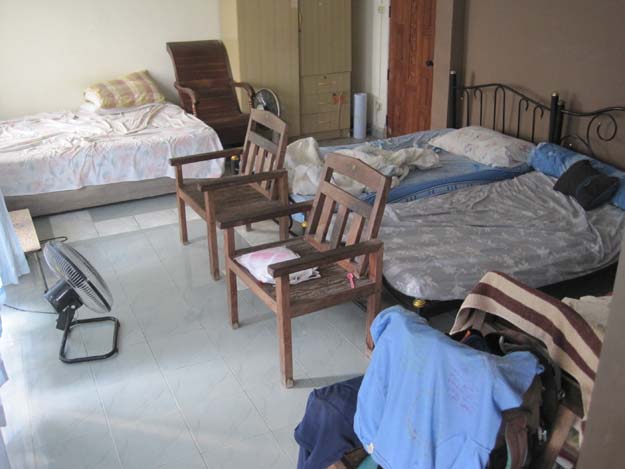