It’s nice to be back in California, though I haven’t been around much. Everything is too far. It seems easier to fly to Europe than go to Death Valley. I will explore my state sometime. I am rabid California patriot. Whether deserved or not, it’s a mythical place. There’s a reason why there are no songs called “Oregon Girls”, “Oregonification”, “Oregon Uber Alles” or, especially, “It Never Rains in Southern Oregon”. 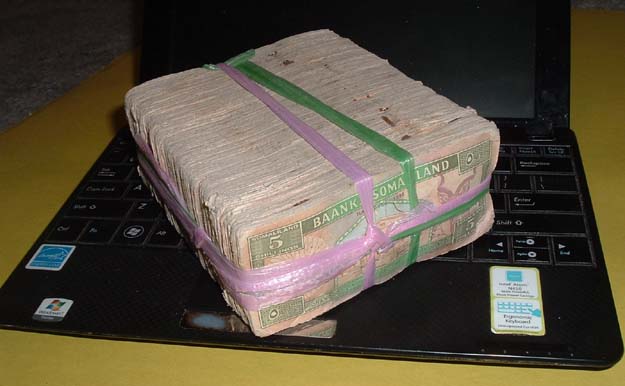 News flash! My Somaliland money finally arrived! As everyone has surely memorized my April 12, 2011 blog post, I managed to get about 7.5kg, or 17.5 pounds, of Somaliland currency. I sent it home registered mail from Kenya and it took no less than SEVEN months to arrive. Seven months! I would have bet the house that it was history since customs opened another box of junk I sent home from Kenya, but no.
I am excited to be reunited with my manky-smelling currency bricks. Did you know that 10 bundles of 100 banknotes is called a brick? (TheDromomaniac.com is like a nonstop online advanced college course—and I do it for free!) The brick in this photo consists of 1000 five-shilling notes, a total of 5000 shillings. 5000 shillings has a value in US dollars of…drumroll…exactly 90 US cents. Yes! I love stuff like this. Name me another country where I can get something similar, and I will dust off my backpack. Or, the way the US dollar is going, I might not need to go anywhere.
Collecting small denomination banknotes is something I like to do with my time while traveling. At first glance, visiting banks and post offices (I always like to see what stamps are on sale) seems like a self-imposed purgatory, but it’s fun, I’m telling you. I like hobnobbing with the people in the bank and they see so few foreigners that I am a novelty. In one bank I was invited for tea in the manager’s office while he sent someone scurrying to look for the smallest notes they had in the vault. 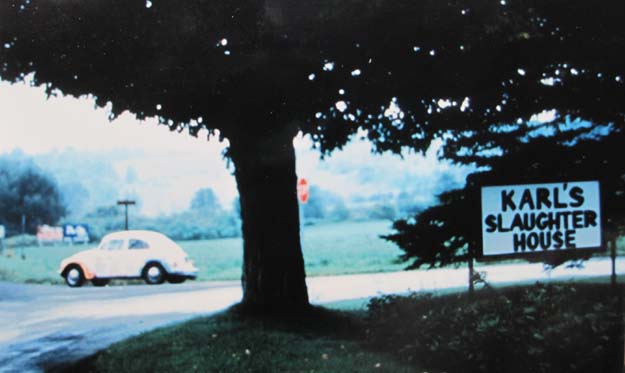 This photo has nothing to do with anything. It is from New York when a friend and I drove around the country to see as many baseball games as we could for a month in that VW Bug before our last year of college.

But wait a moment. Let’s not presume the laptop is worth more. It is an Asus Eee PC netbook, and I can hardly look at it anymore without disdain. I was so good to it, I babied that thing, always carried it in a hard case, was ever-vigilant to keep each spec of dust out, gave it frequent massages—and the @!#$& died on me after less than two years of ownership. Bad motherboard, dead battery, faulty headphone jack—none of it worth replacing or repairing even when I was in low-cost Thailand.
I need to get another one. Well, I don’t need to get another one, and I am ashamed to admit that when I had a laptop, a strong factor in choosing a guest house was based on the availability of wifi, but I want another one. (I’m also in the market for a camera. The shell(?) isn’t sealed right and I have a spot of dust on the inside of the lens. It’s soon to be another $150 down the drain.) I’m not thrilled about throwing away another $350 on the same laptop, so, as they say in parts of Asia, “What to do?”
Unless I am blind to other options, it seems to come down to another low-end netbook or make the expensive leap to Macs. Esteemed blogger Gary Arndt say that if you want a professional blog, you need a professional computer: a 15″ Macbook Pro, in his case, but that thing weighs 5.6 pounds (2.54 kg) and weight is everything. (The Asus weighs exactly half.) A Macbook Air is at least $1000 without a memory upgrade, surely sturdier, but rumored to be a less-powerful machine, not to mention it costing almost three times an Asus.
What about tablets and smartphones? If they are the future, then I can say without melodrama that it can only be the death of writing. How can it not be? You simply can’t type much before you want to hurl it, or am I missing something? A USB collapsible keyboard? Is it time to look into carrier pigeons?
What do you think I should do, other than stop whining? 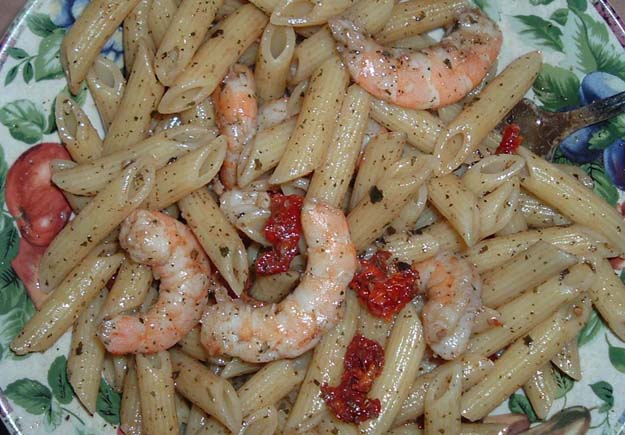 Honing my cooking skills: whole grain pasta with tender shrimp, succulent sun-dried tomatoes and a medley of herbs. Did I mention I am single? I'm quite a catch.