At the moment we arrived back in Hargeisa from our weekend in Berbera, the first rains of the season came, and though the downpour lasted no more than 30 minutes, the streets were instantly flooded. When the rain subsided, people came out to stare at the water like it had snowed. 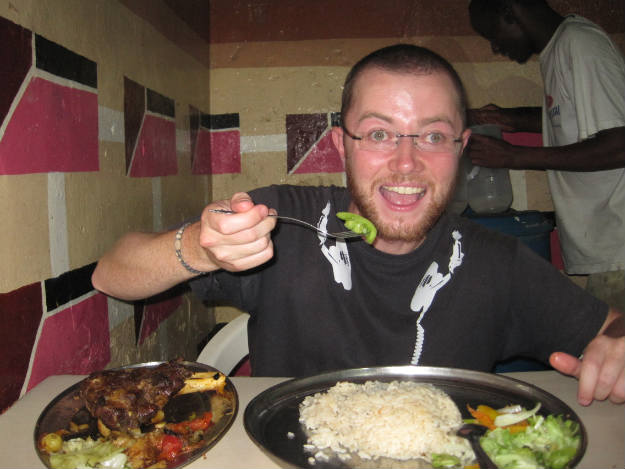 Chris from Liverpool (Gerrard's a tosser!) sampling some goat and rice in the Somaliland Restaurant which is about two blocks behind the Oriental Hotel. It's a total dive where there are no menus but lots of grunting waiters. I think we ordered 'meat and rice', so I was blown away when this came. The goat had to have been cooked forever as it was so tender and tasty and the rice was infused with cinnamon and other spices (17,000 shillings, about $3.00)

I’m at the Union Star Hotel, two blocks west of the landmark Oriental Hotel. $4 for a single. It’s OK. I mean, your mother would burst into tears if she saw where you were sleeping, but if you are used to Africa, there’s not much to complain about for $4.
I thought of staying in the spiffy Oriental at $15 a night to get some much-needed rest, but that was before the manager accused me of “scamming” the hotel because I was using their wifi. I pointed out that I had bought a drink in the restaurant, but he was unmoved and now he is my mortal enemy.
The manager at my hotel is hardly better. He tries to divide and conquer by overcharging us individually with creative math and berates us to pay before we question him. The next day he does it again, as if we are idiots.
This is when I wish I had a hidden camera so Somalilanders can see how it is for foreigners. They drink their own Kool-aid a little too much about how nice everyone is here and how they would never try to rip off a foreigner, but no Somalilander knows the traveler experience.
It is correct that the people here are fantastic and it has been refreshing to have many conversations with Somalilanders who are eager to discuss things and satisfy their curiosity about visitors. They don’t treat you like a zoo animal, either, but are genuinely interested in you and what you are doing and think of their country. (My favorite was a guy in the back of a moving truck who said as he passed, “Please tell me your opinion of the security situation in Somaliland.” What could I say? I moved my elbows in a circular motion and yelled as he drifted away, “I feel pretty good here!”)
It is incredibly easy to hitchhike within town here, too, an unmistakable sign of a friendly place. I just walk along the main drag and point ahead, saying, “You go straight?” and someone almost always stops.
But, as much as that is the norm, for a complete picture I have to add travelers have to deal with hotel manager bastards, larcenous taxi drivers, and guys like yesterday who will come up and yell at Chris and me for taking a photo of a telephone pole (because of the hundreds of wires emanating from it) ranting that we need a permit from the government.
It is like anywhere, a few bad apples mixed in with the good. Somaliland is not quite yet Shangri-la. 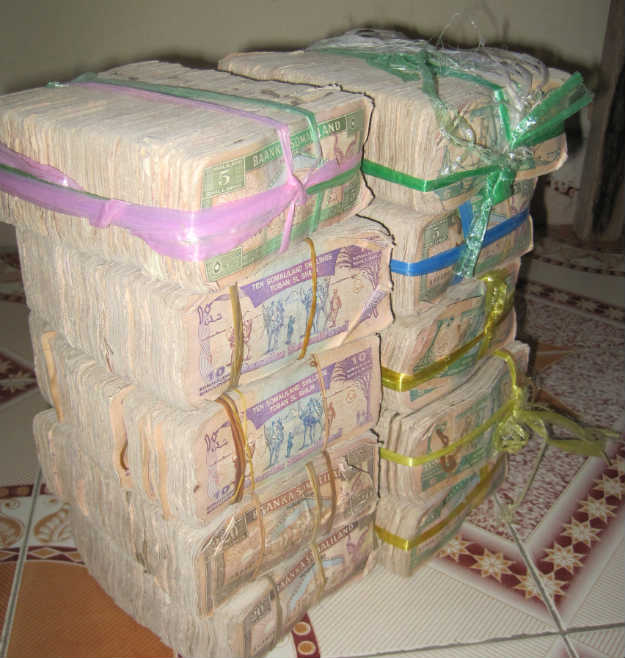 Bought a ticket today. Tomorrow I fly from Berbera to Nairobi, Kenya for $220 one way, which includes a free bus from Hargeisa to Berbera. It’s on Jubba Airways, a regional airline based in…drumroll…Mogadishu! Yes, I fly via Djibouti and war-ravaged Mogadishu, Somalia. I hear Mogadishu is lovely in spring. I don’t think I have to get off the aircraft during the stopover, thankfully. I asked the guy at the ticket office if it was safe to fly through Mogadishu, and he just shrugged his shoulders.
How is Somaliland like Las Vegas? I’m very glad I came to Somaliland, it’s a completely worthwhile experience, a fascinating place, but I can’t wait to go. It is so oppressively hot, busy and dusty here, I’m exhausted and feel like I am going to be sick again. Maybe if I could sleep I would be more at peace here, but I hear the Kenyan coast calling me, screaming for me. I hope no Somali pirates are screaming for me in Mogadishu. Are there land-based pirates?