I went to police headquarters to get my magic letter allowing me to travel back to Berbera without a guard and when I had it in my hand, I asked about Gabor, the Hungarian who was plucked by the police when he tried traveling without one. The Big Cheese said that Gabor was given a letter yesterday so he could go to Djibouti, but when I asked about what had happened the last three days and whether he was arrested, he said that he wasn’t arrested but smiled, “Don’t worry, don’t worry!” It didn’t reassure me, but I didn’t press him further.

It is hard to get a good photo of this caravan. I've never seen so many camels in my life as here in Somaliland, a big plus in my book. Who doesn't love camels? Who? WHO? I want names!

For the trip to Berbera, Katie and I met up with the guys who got turned back at the checkpoint before, French Nicolas and two Asians, a Japanese named Takenori and a Korean named Ryu. Local people see Asians and start yelling, “Jackie Chan! Ni hao!” but they take it in stride, much better than I would.
Ryu said he learned his perfect Japanese just by his appreciation of anime, which tipped me off that he could only be a North Korean spy, but I told him his secret was safe with me. 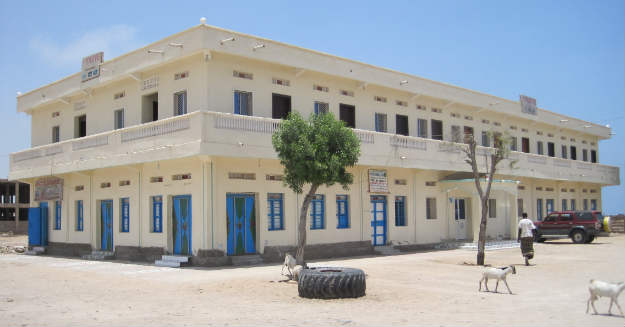 We stayed at the Yaxye Hotel in Berbera, $7 single, $8 double and free wifi(!) to go with the rock-hard beds. There's ALWAYS something that prevents me from sleeping well. 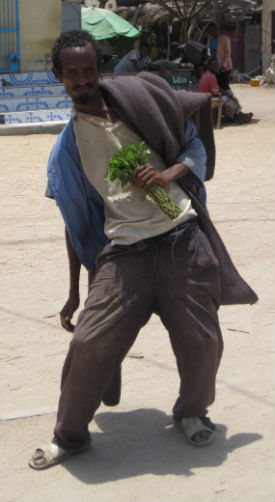 This man has his khat and is ready for the afternoon!

Berbera was hot, much hotter than Hargeisa, maybe 40C (105F) hot. We all had ideas of staying longer on the coast, but the brutal heat quickly changed our minds.
The real torture of the heat is to have to wear long pants. It’s a muslim country and though foreigners’ ways are given a lot of slack, it isn’t really appropriate to wear shorts. But listen to this: it is OK to wear shorts if you are playing sports or on your way to playing sports, so what if I walked around with a tennis racket all day? Genius or what? And I blog for free!
Somaliland is a conservative Muslim country, which may seem redundant to say, but it doesn’t mean the people aren’t friendly and curious. Once a girl walked by in full veil, just her eyes showing, and greeted me in a sing-song loopy voice, “Hellllloooooo!” That doesn’t happen anywhere else. 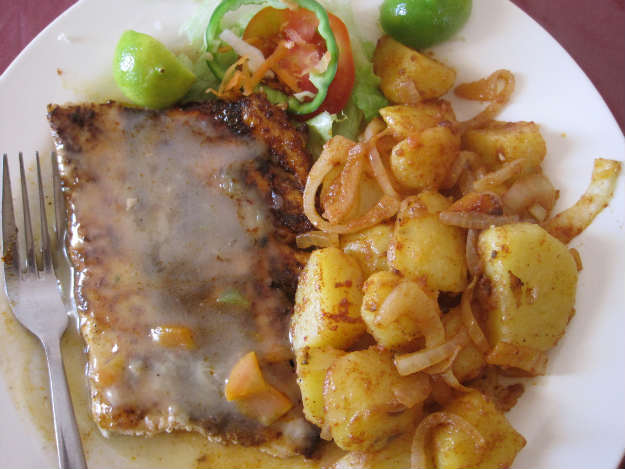 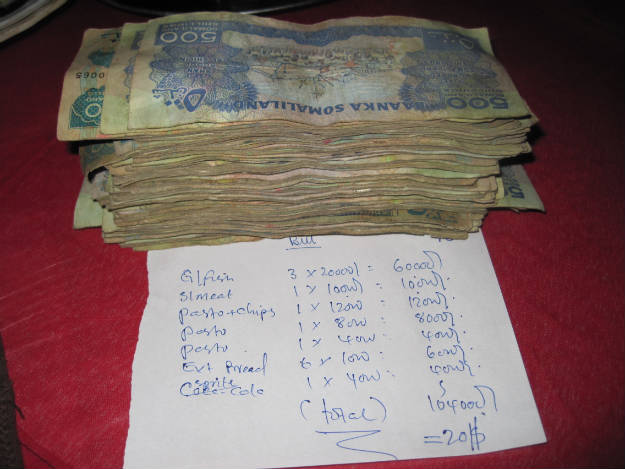 The quintessential Somaliland photo: the restaurant bill and the stack of bills needed to pay for it.

We went for a walk around the quiet, dusty streets of Berbera. It seemed that everyone—and I mean everyone—wanted to stop us and say hello, chat, ask what country we’re from, etc. Most were very receptive to photos, too, which was a boon for Nicolas as he is taking hundreds a day. He’s a TV cameraman in Paris who’s probably not used to asking for permission, and he gets us in trouble all the time with people howling when he points his giant lens at them. The worst was on the highway when we stopped to stretch our legs. He had been taking photos and a woman came charging to the road with a big rock in her hand, very upset, until our guard had pacified her somehow. It was the only time I was happy to have a guard. 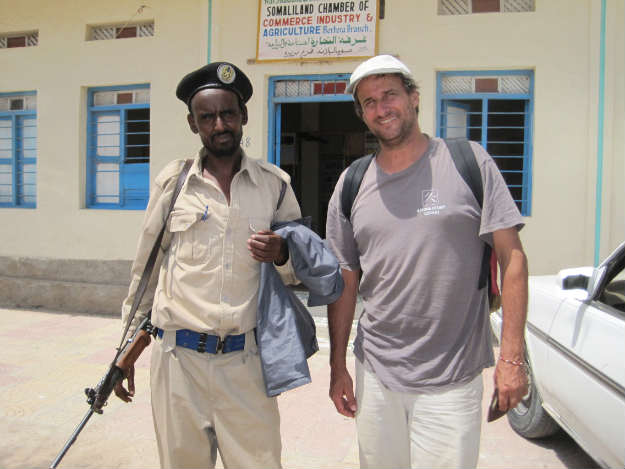 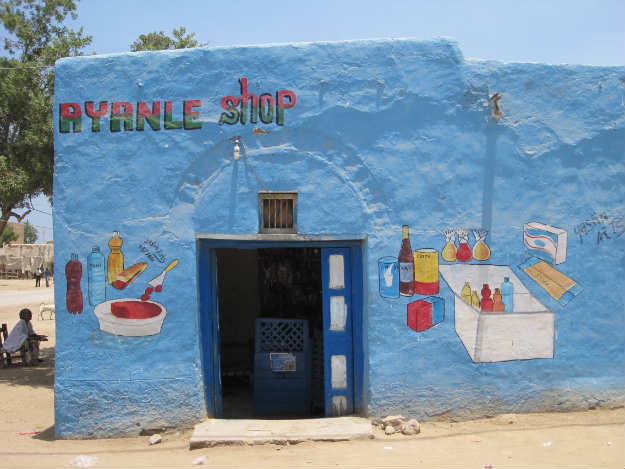 The town is of interest, but the beach is what we were here for. We were so focused on it that we collectively lost our minds and left at the hotel our towels, sarongs, sunblock—everything useful. We were woefully unprepared, plus we walked several kilometers in the midday sun. We all knew we were going to get fried as there was no shelter anywhere, but we had such tunnel vision to be in the sea, we damned the consequences. It’s not every day one gets to swim in the Gulf of Aden, the Horn of Africa!

Some of you who may not travel much, you may be stopping to ask yourself why I would want to travel and go to the beach with people I just met. It’s true I dont know them, but they’re travelers; I know them. I also know that it is going to be great to hang out, hear their stories and exchange information with my “brothers”.
In Africa (and India), you meet a different kind of traveler, someone always interesting with a good story to tell. I literally mean always; I can hardly think of a traveler I’ve met who didn’t leave an impression on me. I’m amazed how young some are. I thought Africa was a continent you worked your way up to after Europe and Southeast Asia, but no.
I find that I am regarded differently, too. In Europe I’m seen as a nearly destitute, semi-feral ragamuffin living hand to mouth, while in Africa I’m a modern day Thurston Howell III, blowing money for no good reason. How more bourgeois can it be than to take domestic flights in Ethiopia? What, you’re too good for the bus, Foster? 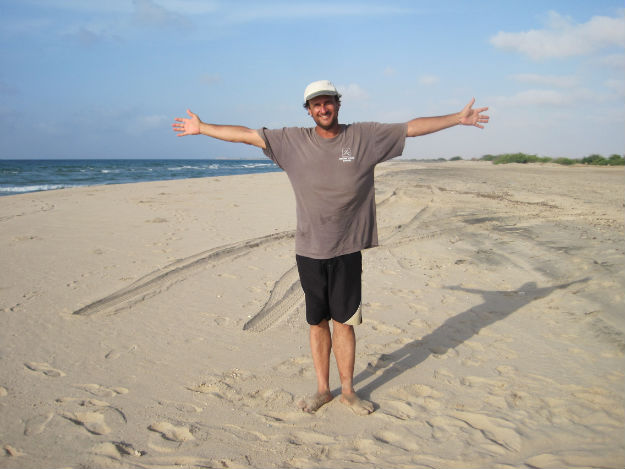 We walked forever and a mile past the last local people so Katie could wear a bikini. No burqini for her. I thought the beach would be polluted and the water worse, but it was clean, the water perfect, and for atmosphere, a few camels were hanging out. Camels on the beach! I was in the water for hours, it felt like.
The miracle of the afternoon was when Ryu lost his glasses in meter-deep water and was freaking out because he’s blind without them, but Nicolas, who hadn’t even seen it happen, dove in and found them instantly, freaking all of us out. 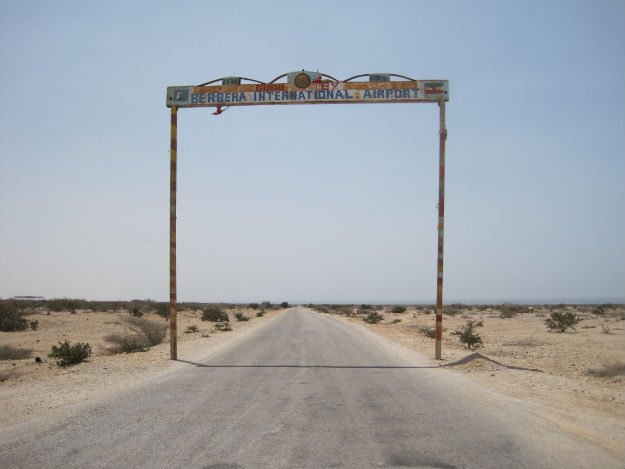 Beyond this humblest of signs is one of the longest runways in the world, a backup for the American space shuttle in the 1980s.