There’s a lot to write about: a travel friend has been arrested or detained, I’m still trying to wrap my head around the concept of Somaliland, and I have been playing ping pong and eating camel burgers with a bunch of westerners at a pot luck.
Last photo of Ethiopia, a sunset view of a Harar mosque that looks like it’s on fire: 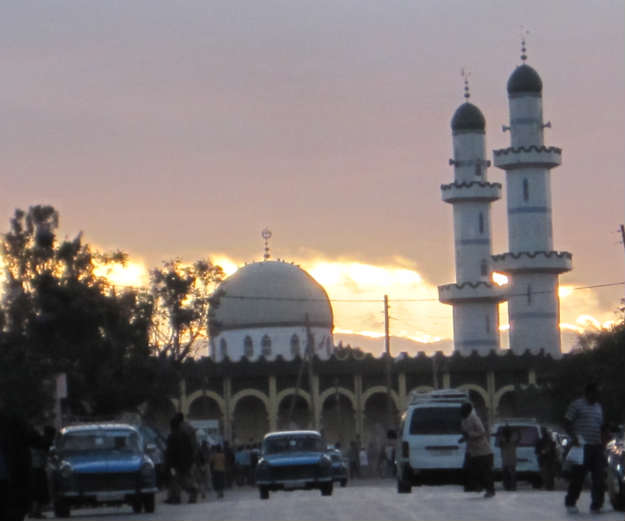 I stayed an extra day in Harar for no reason other than I sensed I might not return to Ethiopia and I wanted to soak it all in one last time. That’s the way travel is; you get used to a place and appreciate it more and more, still discovering things—and then you abruptly leave.
I will miss the way Ethiopians suck in their breath as a way of answering a question, just as Danes do. The first time you hear it you think you need to be ready to perform the Heimlich Maneuver. The next few times you think everyone has asthma, and then you realize it is a simply an affectation.
Harar, and Ethiopia as a whole, really grew on me. I’m a little down on myself for only scratching the surface of Ethiopia since I didn’t “do” much in six weeks, but I had a great time aside from my epic sickness in the middle.
My last night I met Sean McLachlan, a writer from gadling.com. A couple of weeks earlier a friend sent me an article of his about Harar, and here he was in the flesh, recognizable because of a Gadling t-shirt. I tell all my friends with businesses to give me shirts to wear for huge free international advertising, but they don’t listen to me. Sean is a professional writer and yet totally friendly and personable, not a hardened crank like I imagine most real writers.
It wasn’t so surprising to run into him because the week before, a guy from the Lonely Planet Thorn Tree wrote me about Ethiopia and added that I should keep my eye open for Eddie, a New Yorker in his 50s who was traveling around. I ran into him, too.
Leaving Harar for the border, I debated with Chris in the back of the van about the merits of cheap domestic flights. Sure, you miss the camels being herded around and the nice scenery, but it’s hard to enjoy them in a packed van when the idiot driver is careening recklessly to and fro at maximum speed. One poor girl threw up the entire time. We had to make a stop just to get more plastic bags for her. Two others were sick, one loudly so. I would say to Chris as we leaned hard into each other at every curve, “How can you defend this?” 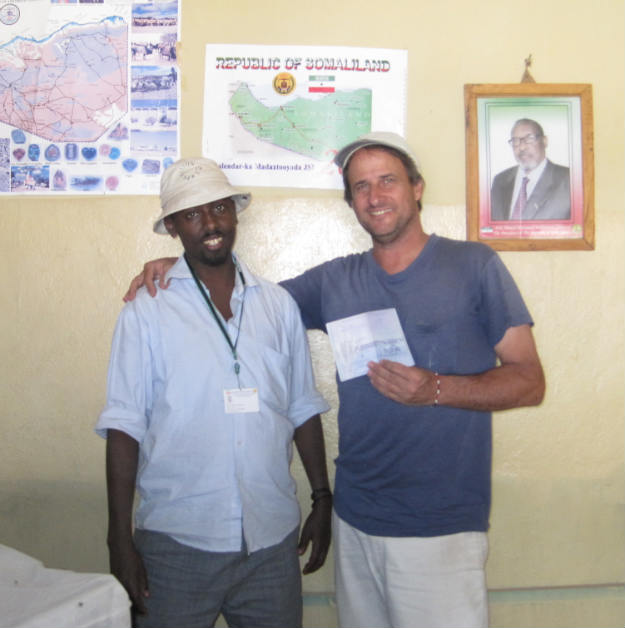 This is the coolest immigration guy ever, so pleasant and mellow, like a caricature of a blissed-out Jamaican. I really wanted a photo of him when he was processing our passports as the string from his hat ran under his nose.

Despite the border being an ugly dusty pit, I felt energized from our welcome. (Later I met another traveler who was given an I LOVE SOMALILAND keychain at the London embassy.)
We crammed seven people into an old Japanese sedan for the ride to Hargeisa. I learned soon enough that almost every vehicle in Somaliland comes used from Japan, still with right hand drive though they drive on the right side of the road. Makes for some exciting passing.
(Is there a difference between a breakaway republic and an autonomous region that wishes for ultimate autonomy? I will let Wikipedia explain Somaliland.)
Somaliland can confuse people about its location. If you went to Germany with your laptop and you typed in google.com, the website comes up in German and asks if you wanted Google.com in English under it. This is because it can tell from the IP addressÃƒÂ¢Ã¢â€šÂ¬Ã¢â‚¬Å“ÃƒÂ¢Ã¢â€šÂ¬Ã¢â‚¬Âlook, it’s an incredibly complicated thing that only UC-Santa Barbara graduates can fully grasp (sorry), but here in Somaliland, google.com thinks I am in Djibouti and Google News thinks I am in the Central African Republic. Yahoo thinks I am in the Middle East and maybe because it is lost, the internet is blazing fast here, the best I’ve had in three months.
We arrived in the early afternoon to Hargeisa, a town that was all extremes: extremely hot, dusty, sandy, sticky and sweaty, a hellish mix that was just like any California summer rock festival from the 1980s, but this wasn’t home. 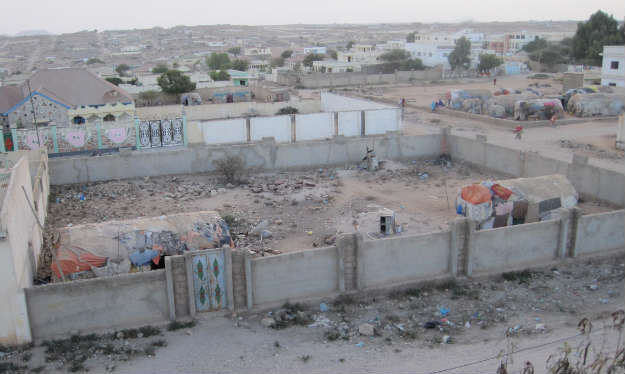 Almost all ten of Somaliland’s Couchsurfing members live with each other in three places. The two I wrote to and am staying with, Katie and Brandon, teach English at Hargeisa University. Ever-cheerful, enemy-less, spectacularly well-postured Katie is keeping a blog that shows what living in Somaliland is like when you don’t have ATM machines, addresses, an embassy, etc. Everyone I met was young, well-traveled, unfazed by living in such inhospitable conditions and on an upward trajectory.
I made an audible gasp when I heard that it is common to take a shower only twice a week, and I must seem like a prissy diva wanting one every night.

At least ten times while walking around town I was asked, “Are you a journalist?” Part of this, I think, is that they want you to have a positive impression of their new country. Somaliland is not Somalia, you are always told, it’s free, democratic, peaceful, etc.
The mantra is “Somaliland is safe, Somaliland is safe”, but if you want to travel outside of the capital, you must hire an armed guard. Huh? They are called Special Protection Units and the purpose is for tourists to not get kidnapped or killed and ruin their image and thus their chances at being recognized as a country. It’s a debatable precaution, but for travelers, we see this as ridiculous since locals don’t get such treatment and therefore we go to great lengths to avoid it, not least because the guards cost $15 a day plus expenses such as the $7 ticket to Berbera on the coast.
A Hungarian traveler I met, and I can count all of them I have ever met in my life on one hand, Gabor, a hardcore guy who has been to 120-plus countries, he somehow managed to hitchhike to Berbera and back without a guard and without a problem. The next day, French Nicholas and two Asian travelers tried the same, but were stopped at the first checkpoint out of town and sent back to Hargeisa. Nicholas mentioned Gabor’s success the day before and they said that he was “lucky” partly because he was alone.
The next day Gabor tried to hitchhike to Djibouti, an insanely long journey that is mostly through desert sands on four wheel drive vehicles, and he was arrested or detained or I don’t know what to call it, but I know it isn’t good because he hasn’t logged on to Couchsurfing in four days, I can tell, which is the sign of freedom.
If you want to avoid the guard you can go to Hargeisa police headquarters in the middle of nowhere and get a letter in Somali from the Big Cheese saying you have a waiver. It makes no sense, but that magic letter lets you pass through all the checkpoints.

This stack of a hundred banknotes is worth about 40 cents. The 20 shilling note isn’t circulated much anymore. 500 shillings is the largest note, but the problem is that there are 5500 shillings to the dollar, and for all you non-UCSB graduates (sorry), that’s only 9 cents. When the largest note you have is 9 cents, you have to lug around bricks of the stuff. To pay a restaurant bill you sigh and thump a bundle on the table and start counting the filthy notes like some mob accountant in a back room.

I tried khat for the first time with a group of new friends and friends of new friends. I sat for an hour chewing leaves and felt nothing, but I was told that I need to chew much more and for much longer. It’s not a very pleasant taste even when I followed advice about mixing it with gum or sipping Coke. I had a good-sized chaw going on my cheek and thus was thankful not to be a big part of the conversation or I probably would have drooled all over the carpet had I tried to speak, surely a real buzzkill for everyone.
One point of khat is the socializing and what else are you going to do in the heat of the lazy afternoon, but I’m not feeling that lazy yet.
I was totally unaffected by khat and all those people who said I did naked somersaults the whole way home while screaming, “Long live the shifta!” don’t know what they are talking about. 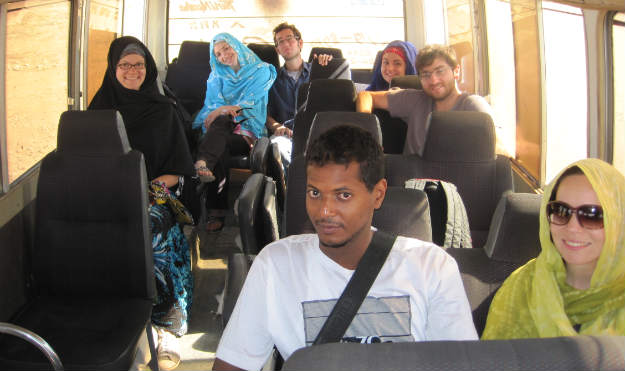 One day we visited some other English teachers at a prep/boarding school called Abaarso Tech about 20km outside of town. (Above are the girls wearing their in-public clothes.) With its high walls, three barriers to entry at the front gate and Cool Hand Luke guard towers, it was just like a prison. I was going to do my “What we have here is a failure to communicate…” impression, but I am a sensitive guest.
I had a great time visiting, but I don’t know how the teachers can live there, especially since they have few chances to leave the compound. They are stronger than I am. This photo shows about a third of it. 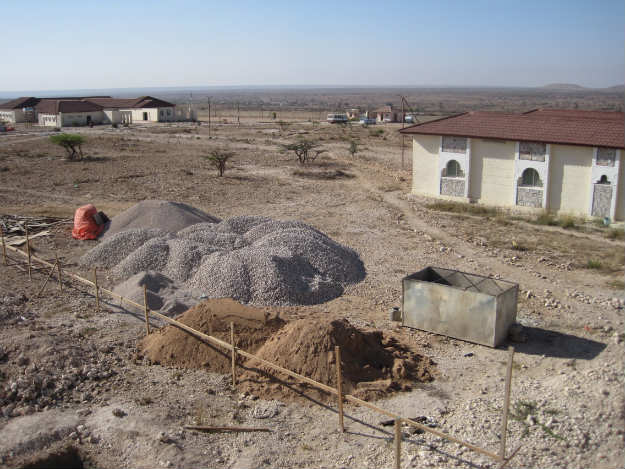 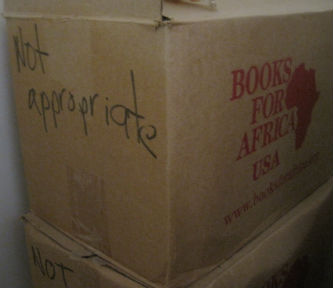 Banned books! Since so many donated books were deemed “not appropriate” for impressionable Muslim youth, they have the best secret library for a thousand miles around. 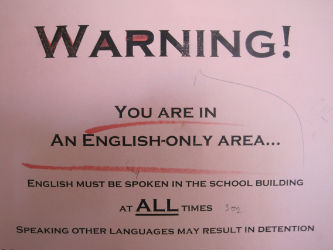 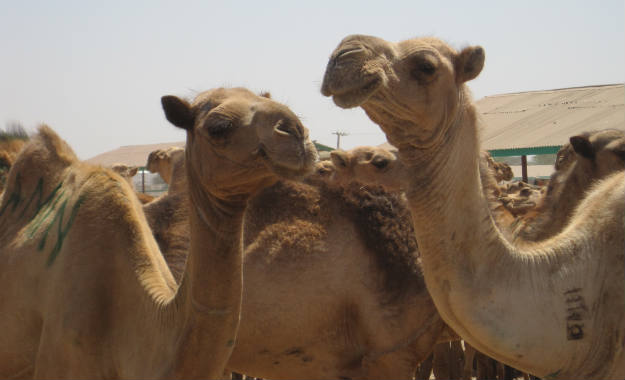 I hitched a ride to Hargeisa airport via the camel market to see what it was like with a guy who happened to also have something to do in the airport, and even though I had no ID, he talked us into the terminal from the security guys outside, then we blew by immigration, and then despite having a backpack, we whisked through the baggage checkpoint without stopping. I went out next to the tarmac and took photos and it felt like I could jump on this East African Express flight to Nairobi.
I hitchhiked back to town with an immigration officer who swore I could get a visa at the border for 7 days with the possibility to get it for 30 days if the officer feels like it. If everyone knew this, they’d get more tourists.

Left home three months ago. I miss my Mommy.