Psssst! Want a flight tip? If you are a couple and the aircraft has three seats in a row, reserve the window and aisle, keeping the middle seat empty. Your chances are much better that you will have the extra seat free. If someone does come, then you can offer to switch, which they will always accept unless they were an orphan and want that family bond they never had. This wisdom comes from Paul Sully, the pride of Somaliland. Airlines are so cut-throat now that it could become harder to do, as this story shows. 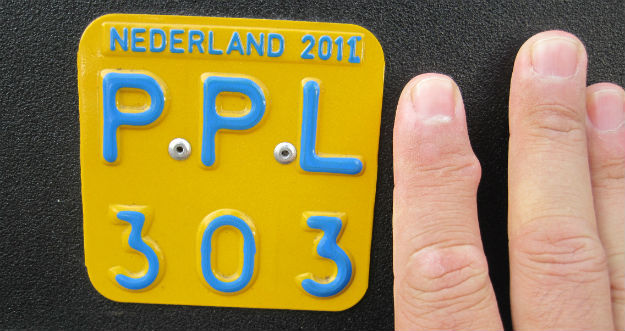 Has to be the world's smallest license plate, right? And look at that ugly bump on my finger.

I flew from Jakarta to Amsterdam on Malaysia Airlines for $490 one way, which isn’t too bad given high airfares these days. I was so into Indonesia I didn’t give much thought to Holland until a few days before my flight when I started thinking, “Shoes…shoes…I’m almost positive I have shoes in my backpack,” and “Jacket…I’m sure I have a jacket—but let me double-check.” I assumed it would be nice and warm in mid-May. As we descended after 14 hours of flying from 32C (90F) Jakarta, the captain says something to the effect of “soon we will be arriving in Amsterdam where the local temperature is 7 degrees Celsius (54F)”. Those in shorts and flip-flops had quizzical looks and started murmuring to each other, “Did he say 7? 7?!”
I used to look forward to flying into Amsterdam’s thoughtful Schiphol airport, but after the last few times I can’t take the arrogance anymore. First of all, you need a lot of coins when you arrive for phone calls and train tickets, and they’re hard to get. It’s worse than India. The curmudgeons working at the information booth (admittedly a mind-numbing job) sit with their arms crossed and berate you if you challenge their poppycock that there is a change machine in the airport or that the banks will make change.
While it’s fantastic that the train tracks are right under the airport, less than 50 meters from customs, dealing with the train is maddening. Dutch train ticket machines take Dutch credit cards and only some—not most—take coins, but around the country many train stations are unmanned and nearby businesses won’t give you change. Even after you manage to get a ticket, the Dutch contempt for you isn’t finished when you discover there is no place to put luggage on the train. An intercity train with no space for luggage. Deal with it!
It’s OK. It reminds me I am unprepared for the future, and Holland is the future. I tell Dutch people that all the time and they tell me it’s nonsense all the time, probably because they think I am doling out the compliments to borrow money, but I really believe it. 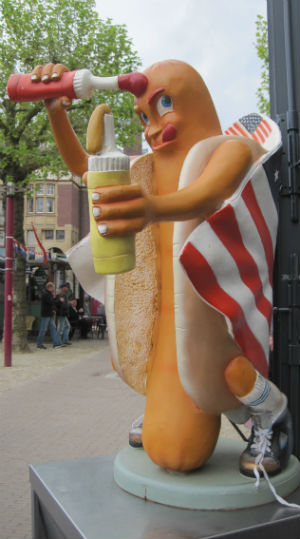 I'm pretty sure this is mocking me.

I was talking with a roaming Amsterdam tourist information volunteer on the street and Indonesia came up. I mentioned I had just flown in.
“It used to be a Dutch colony, you know,” she said.
“Yes, I know. In Holland they’re called ‘The good old days’, right?”
She went on: “It was the Americans who told us after the war to let go of Indonesia and give them their independence.”
“Really? That must have been the last time the Dutch listened to anything the Americans told them.”
There is no more progressive country on the planet than the Netherlands, I claim, and Dutch boldness is perfectly encapsulated in their self-confident, phlegm-hacking language. You can’t both speak Dutch and be shy.
Take any hot-button topic in USA and the Dutch will already have dealt with it many years ago: legalization of drugs, legalization of prostitution, euthanasia, urban planning, age of consent, teenage abortion, etc., and the results are almost beside the point; the fact the Dutch actively try something is radical. Nothing gets swept under the rug. Long before a Dutchman has become an adult, he or she will have done everything, tried everything, seen everything and so past it that if your image of Amsterdam is marijuana “coffee shops” and women for sale in the windows, they’ll tell you it says more about you than it does the Dutch.
All that is changing and there is a rising intolerance, Dutch people say. Politically, it is moving rightward with a groundswell of support for rabble-rousing firebrand Geert Wilders, but this might be a generational shift in attitudes. Back in the day it was impossible to meet a young backpacker who supported George Bush, and today you will never meet a Dutch backpacker with a kind word to say about Wilders. I am no expert in Dutch politics; I only love the hypocrisy that he is married to a Hungarian, yet is virulently against Eastern Europeans immigrating to Holland. 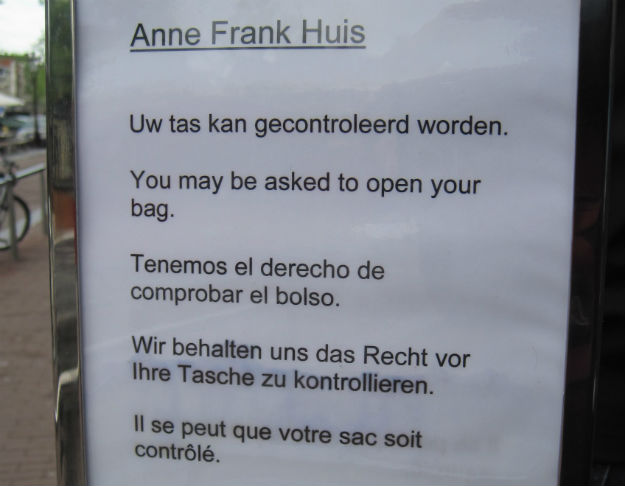 'You may be asked to open your bag' is much less confrontational than the other languages, which is a variation of 'We have the right to control your bag.' They must be jittery that Americans are going to be flip out and start reloading their guns in front of the Anne Frank House: 'Control my bag?! What the hell? Ain't happening, kimosabe! Honey, pass me the ammo!'

I’m visiting old friends in the middle of Holland. Maarten is roughly the same size as me so every time I visit they have his unwanted clothes set aside in case I want to upgrade my look. This was the birthplace of my orange pants that I have worn around the world a few times. I made a webpage to celebrate their movements.
Next stop: Berlin!
Forgot to include this, a little Dutch treat, the best song to ever come out of the Netherlands, “Tom Boy” by Bettie Serveert: