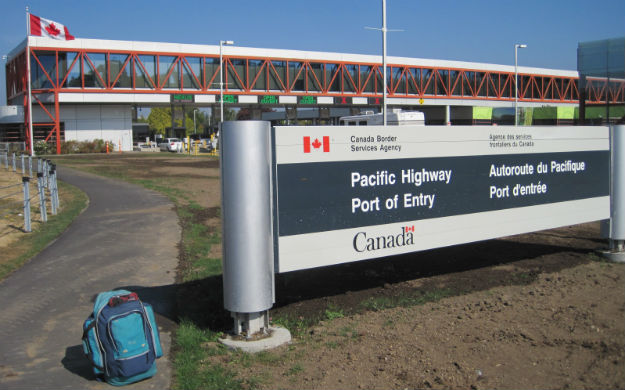 At the border with a woman’s backpack. I intend to get a better pack while on the road, but it hasn’t happened yet. In the men’s bathroom of the immigration office there was no toilet seat liner. It was my first sense of being in Canada. Toilet seat liners are for American wimps. This is Canada!

It took a full 15 minutes for immigration in Canada to decide to let me in. I wouldn’t have been surprised if they rejected me because although I answered all their questions honestly and without hesitation, they were bad answers to simple questions such as: How long are you staying? (It depends on the weather. Less than a month.) Where are you going? (Vancouver and then the Rockies, possibly) How did you get here? (A friend drove me to the border and I walked across.) How will you go from here? (I don’t know. I read there is no public transport.) Where will you go after Canada? (I don’t know. Maybe back to Seattle.) How much cash do you have on you? (Very little. I need to use an ATM machine.) How much do you have in your bank account? (About $6000.) Can you show me an ATM receipt with the account balance? (No.)
The immigration officer’s expression hardened and he began to study the many pages of stamps in my passport. I realized I should have made some soothing answers up. I went on the offensive by explaining, “I’m a traveler—”
“Yes,” he interrupted, shifting in his chair. He exhaled, eyes fixed on my passport, not sure what to do with me.
“I’ve been to a hundred countries,” I went on, “and I have a travel website.” I wasn’t sure how “travel website” would translate into making it imperative that I visit his country, but I produced this card shown below. He took it and asked me to sit down. 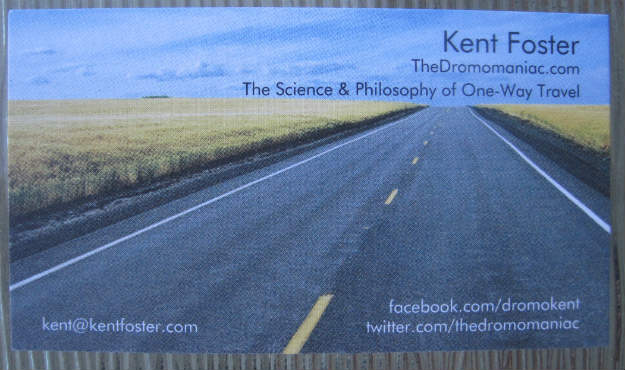 I wondered if telling him about my website would backfire because he stared at his computer monitor intently. Was he reading my latest blog post about the three unpaid tickets in British Columbia? I studied a display of banned items in Canada, almost all of them from China. There were odd medicines, ivory carvings, and some very cool crocodile-skin shoes that I was admiring when I was rousted by a boisterous “Foster!” barked from across the hall, summoning me to the counter.
I was expecting anything. If I was turned away, I would only have to inform my CouchSurfing host and go back to friends in Seattle. I might have reveled in being banned in Canada, in fact.
The immigration officer asked me again how long I would stay and I said less than one month in any case because of the impending cold weather. He might have muttered, “Sissy Californians” under his breath, but out loud he said, “Have a safe journey,” and crisply handed me my passport—sans stamp, so I don’t know how long I could stay if I wanted to. 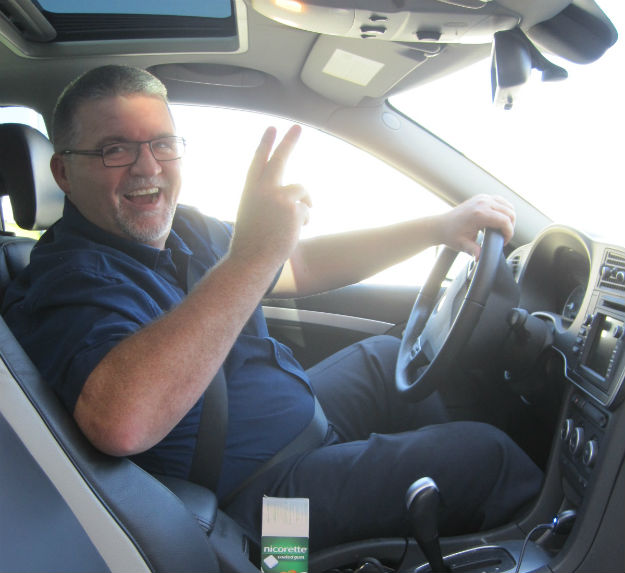 I had no choice but to either hitchhike or hustle rides from nearby parking lots, but that’s not my thing, so I stood just after the exit where cars were still going slowly and stuck out my thumb. In about ten or fifteen minutes I got a ride from a jolly local guy who drove me up the road to Cloverdale. It warmed my heart to experience so many Canadian things right away: Bryan Adams played on the radio, my driver took a swipe at Americans, and I saw a not unattractive female construction worker in a tank top. It reminded me of something I’d seen in Canada before: beautiful girls working in highway gas stations in Ontario.
The strong feeling of Canadianosity extended after I went into a Bank of Montreal to get change to use a payphone, and the teller offered to let me use the phone in the bank. It was a small gesture that floored me. Where else in the world would that happen in a bank?
There’s a long and glorious tradition in USA to try and use Canadian coins in shops and parking meters and so on, but here no one cares if you do the reverse since the American dollar is now equal to the Canadian dollar. I paid $2.50 to take a bus to northwest Surrey to my CouchSurfing host, TARA MITCHELL. TARA MITCHELL wants me to mention TARA MITCHELL in my blog so TARA MITCHELL’S name will show up in Google’s search results. TARA MITCHELL, unfortunately, hurt TARA MITCHELL’S back the day before I came and TARA MITCHELL is now bed and couch-ridden for the whole weekend, unable to leave the house.
My plan, as it stands now, is to check out Vancouver this weekend and then go to the town of Kamloops about 350km away on Monday, maybe by hitchhiking.