Surreal moment of the weekend in Puebla: a freakishly aggressive local bus driver with a compilation of Bee Gees’ love songs playing in the background like a mocking soundtrack. He cut people off (“…how deep is your love, I really mean to learn…”), honked like a madman (“…how can you mend a broken heart…”), and voiced an epithet or two to his fellow drivers (“…you don’t know what it’s like to love somebody the way I love you…”)
Puebla is 120km ESE from Mexico City and a big city of over two million people, but the historic center is nice and low-rise. It reminded me of Sucre, Bolivia. Puebla is arguably most famous for mole poblano (“poblano” meaning “of Puebla”). Mole (pronounced “moh-lay”) is a complicated sauce that has everything but the kitchen sink: chocolate, banana, garlic, tomato, several different kinds of chile, plus dozens more ingredients and dozens more variations.
In America I’m not crazy about mole because I find it to be too hit or miss. It never tastes the same way twice, which is OK, but usually it has a bitter chocolate aftertaste or the balance simply isn’t pleasing to my tongue. Puebla and Oaxaca are the two ancestral homes of mole in Mexico and I will be experimenting to the point that I expect to become a blowhard foodie, so look forward to that. 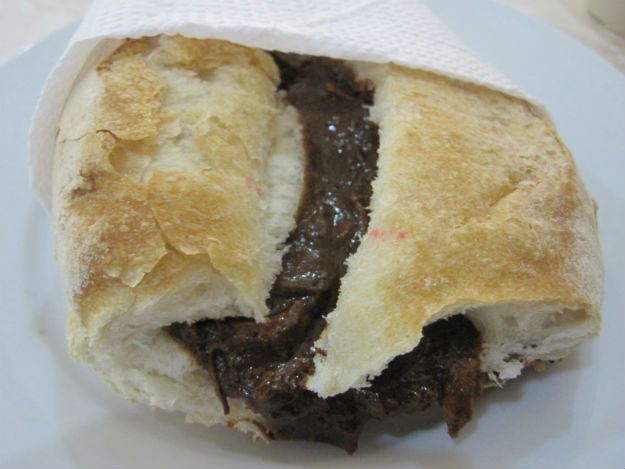 The mole poblano torta (sandwich) from the Salon Familiar Corona on Avenida Reforma. 27 pesos. (12.5 pesos = US$1) This was fantastic: complexly rich like a barbecue with a nice hint of chocolate, a suggestion of fruit and a light slap of chili. 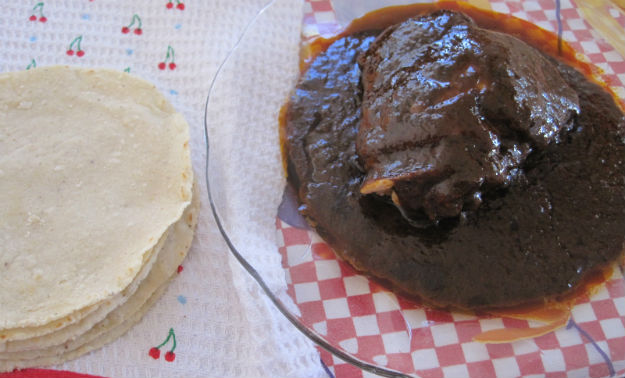 This mole over chicken with tortillas, clear potato soup and a pitcher of horchata was 35 pesos at a tiny place near the university. It was good, not great. 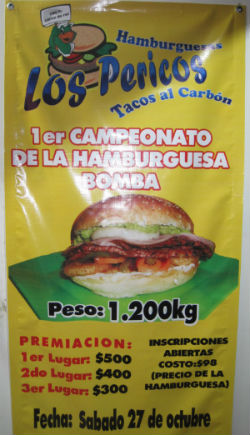 Hey, who’s in town next Saturday? There is a winnable hamburger eating contest. It is only one hamburger: 500g of beef plus everything else that adds up to 1.2kg. You pay what the “bomba” normally costs, 98 pesos, and then if you eat it the fastest, you get 500 pesos. The guys behind the grill said that 6 minutes 20 seconds is the present record. That sounds very beatable.
I would do it but I won’t be in town not to mention I don’t have a gall bladder and can’t get into competitive eating—unless we are talking about mole poblano tortas. On the other hand, if they gave the winner a huge championship belt like they do for boxing and I can return to defend my title, then I might reconsider.
Just another free money-making idea from The Dromomaniac! I am so selfless. 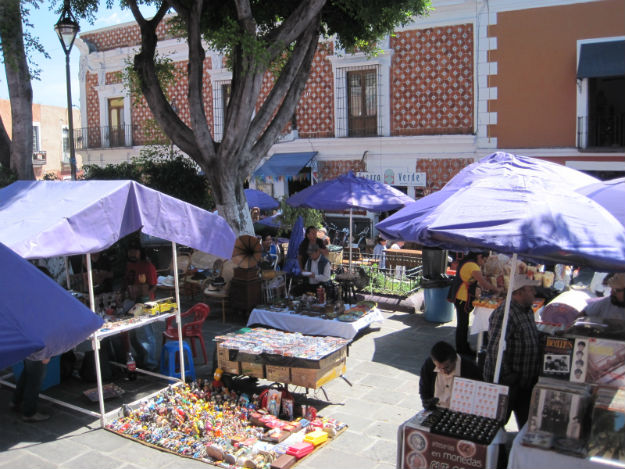 Excellent little weekend flea market in Plazuela de los Sapos a few blocks from the zocalo (main square). Few people in Mexico have a kind word to say about their postal system, and I’m not traveling around Mexico with a pile of old license plates and 45rpm records, so I could only look. Shame. 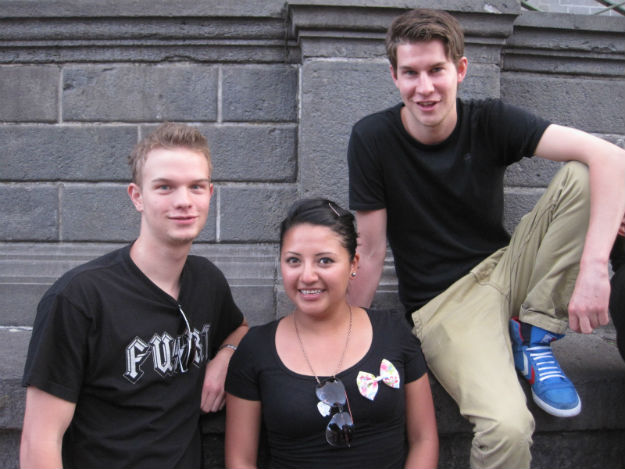 I met these two German guys who are studying in Puebla. We were just hanging out, talking, and a stream of women began to come by to take a photo with them. Well, they asked to take a picture of ‘us’, but on this day ‘us’ meant, ‘Hey Gringo, take a photo of me with the cute blond boys.’ I asked one girl why she wanted a photo and she gushed, ‘They’re handsome!’ I can’t judge, but if you happen to be a lonely blond-haired guy, I’ve got a place for you. 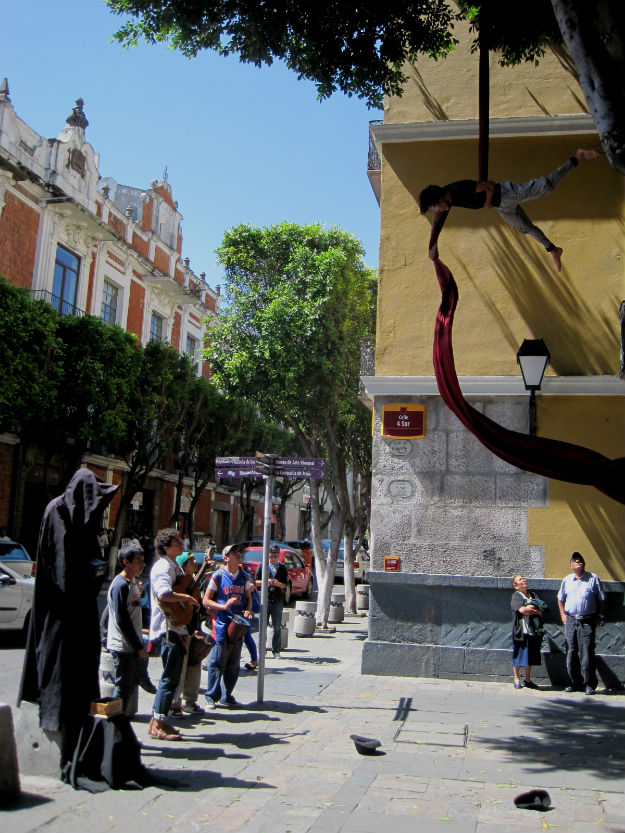 A melange of Puebla street performers

Video of the Month
By now has everyone seen this viral 1970’s Turkish movie clip of the worst death scene ever? If not, it is definitely worth 65 seconds of your life. In fact, it might be the best-spent 65 seconds of your life.
http://www.youtube.com/watch?v=NrlIK_ArzeM
A pinch of practical information:
Mexico City-Puebla by bus is about 114 pesos. I offend Mexicans when I rave about the airport and the two main bus stations in Mexico City. They don’t say it, but they want to say, “Thanks, but why wouldn’t we have a nice airport and bus stations?” Given the amount of hustle on the streets, at the bus stations I expect a free-for-all where twenty touts forcefully try to guide you to their bus, but it is as boring as checking in for a flight.
Why don’t you stay with me? You can follow along with RSS or subscribe to an email feed.