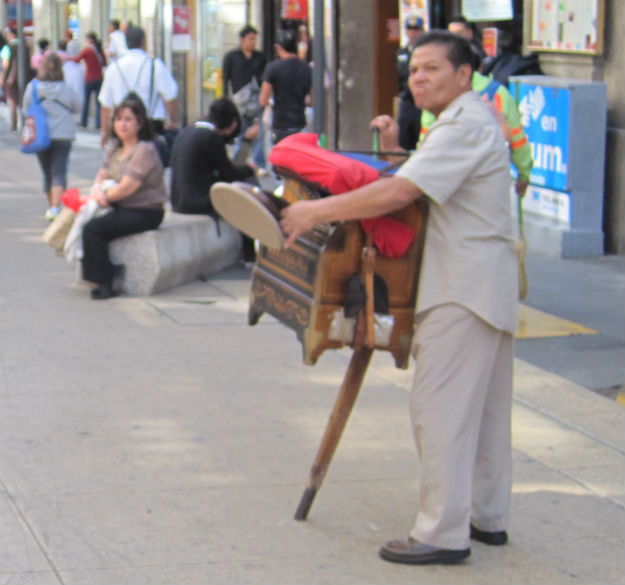 Look at the scowl on this guy’s face. It’s blurry because I was shooting quickly over my friend’s shoulder on a street in Mexico City, but he saw me and whirled around a moment later. The guy is playing a—what do you call these things, a music box? Anyway, he is merely turning a crank and music comes out, and for that he’s passing the hat. Never EVER give money to them! He’s turning a crank! Meanwhile, there are people busking, entertaining, doing something with skill and talent, but this guy wants you to give money because music comes out of his machine. If I am supposed to give him money because it’s a cool gizmo, then I should bring my disgraced former Japanese Prime Minister Nakasone piggy bank to the street and expect everyone to give me money for that—and I will smile for photos.

I’ve never traveled so much so close to home; this was a unique trip. It started as a one-way flight to Seattle, I dipped my toes into Canada for a spell, came down to Los Angeles long enough to fly to Mexico City, then overland to Guatemala and back. Three months. (This is my first Google Map, so don’t laugh.) Some might say the only uniqueness was that I never became sick on the trip, especially since I can hardly think of a day when I didn’t eat street food in Mexico and Guatemala, but that can just be luck. I’ll see if I can come up with some life lessons learned before the end of this.

How does Coke talk the Mexico City government into this beast on the right?
“Listen, we want to put up a gaudy, 50-meter-tall fake Christmas tree in the middle of the road with a hundred Coke signs on it.”
“Um…will it at least say “Feliz Navidad” or something about Mexico City?”
“No, we’re thinking a couple of gigantic signs that say ‘Coca-Cola’.”
(Sighing) “All right…you know my Cayman Islands’ bank account number.”

I had such a feeling of victory and accomplishment upon arriving in Mexico City, hitchhiking all the way from Guatemala City, but it began to sour quickly when I checked out a hostel called Bed & Breakfast Mexico. I asked the girl if she had a room, and her reply was to ask me where I was from. I said, “America”, and regretted it immediately, knowing I should have said Japan. I asked why it mattered where I’m from and she said it didn’t, but when she got on the phone to ask if there were rooms (huh?) her first answer to the other person was, “America”.
We stayed at Hostel Home, a well-worn but only partly-scuzzy place, the kind where you wish someone would invent platform slippers for using in the shower, though that was hardly necessary as the promised “hot water” was more like a steady spit. Something about the place attracted a fair share of my idiot colleagues who don’t know how to act around others and think they’re the center of the world. What kind of person won’t whisper when other people in the room are sleeping? How self-absorbed do you have to be to put your backpack in the middle of the floor for everyone to step around? Have all these punks been raised by wolves? Are they off their meds?
The receptionist was no help when I asked why he didn’t tell the guys in the kitchen causing a ruckus at midnight to shut up. He smiled and said, “They’re Colombians!”
I wanted to throttle him on behalf of all good Colombians who deserve better than being stereotyped like that. Besides, it’s the Argentines who are the anarchist party animals.
The next day we moved one block over to Hostel 333 which was better, but still you get the snorers, the too-cool-for-school dopes who don’t acknowledge your hellos, and the pond scum who wake up at 6am to catch their flight and rustle plastic bags—oh wait, that last one was me. Sorry. 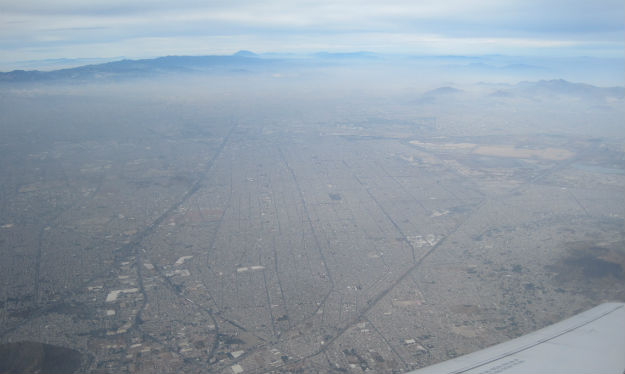 A wee lil’ village named Mexico City. Part of me thinks I left Mexico City too soon, before I could take advantage of cheap Mexican dentistry, before I checked out the weekend flea markets, and before I got a complete mariachi outfit. I would look awesome hitchhiking around Europe in my mariachi clothes, a huge sombrero, and a giant guitar. 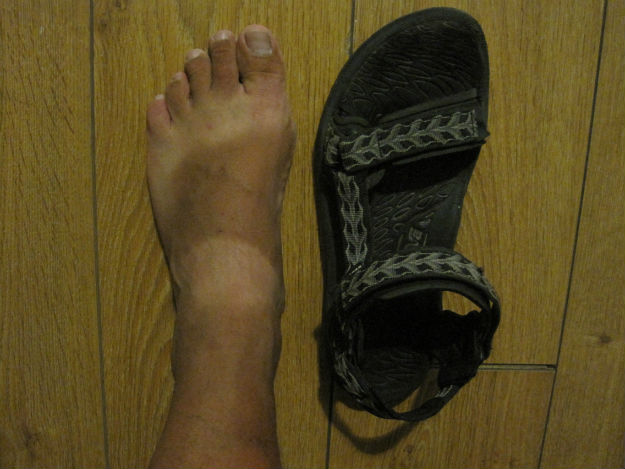 I waited until the end for my deep insights because it is nothing new and you might nod off from my blathering, so let me quickly say that travel can open eyes, destroy prejudices, and develop better understanding (yawn) but this is especially important when it is your neighbors. I am embarrassed how little I know about Canada other than it wants to be the 51st state (A joke! A joke! Calm down, Canadians!) and Mexicans I see all the time which makes me think I know something about their culture, but now I realize I hardly know a damn thing.
The people I came across, which always has to be one of the main reasons to travel, have been incredible. It sounds cliche to say (“such friendly natives!”) but I was amazed and a little surprised. I was expecting some miffed Canadians or a hint of animosity from Mexicans and Guatemalans, but there was nothing of the sort. It was fantastic. The only disagreeable person I came across was a music box cranker in Mexico City and Sir, I’m not apologizing! You need to raise your game!

Practical information
It’s widely unpublicized by the airlines, but this year there’s a new law in America that allows you to cancel a ticket without a fee if you do it within 24 hours of your payment with some exceptions and also to hold a flight for 24 hours before you pay for it.
I flew from Mexico City to Los Angeles one-way on United for $150. An alternative is to fly to Tijuana for about $115, take a local bus to the border and try to hook up with one of the many rideshare offers going north on Craigslist San Diego. Since it is the one of the main points of my website, I should point out that for travelers who aren’t positive when they want to return from a trip, it is often better to buy one-way tickets. I bought four flights, all within a few days of my departure—and I still got great deals. If I had guessed on a return date and bought a round-trip ticket for LAX-MEX, I would have had to pay to change the date every time I needed to, which becomes expensive. I paid $105 for LAX-MEX which included a $50 discount that you couldn’t normally rely on, but even if it was $155, that would mean $305 for two one-way tickets, and just today I saw this promo where they are crowing about $331 for round-trip flights for the same route—with restrictions, of course. The lesson is: one way, all the way!
You might want to wear headphones on the Mexico City and Los Angeles metros. In Mex there are guys blasting music through big speakers in their backpacks that make your ears bleed, but in LA they are useful to avoid hearing all the conversations. Last time I came through, a woman spoke to the person next to her loud enough for everyone to hear, “I do the drugs; I don’t let the drugs do me!” Oh, OK, thanks for that clarification. She went on, “I’ll tell anyone my story!” No, no, please, I have 13 more stops. I was going to wear headphones that weren’t attached to anything, but didn’t want to draw attention to myself.
Why don’t you stay with me? You can follow along with RSS or subscribe to an email feed.