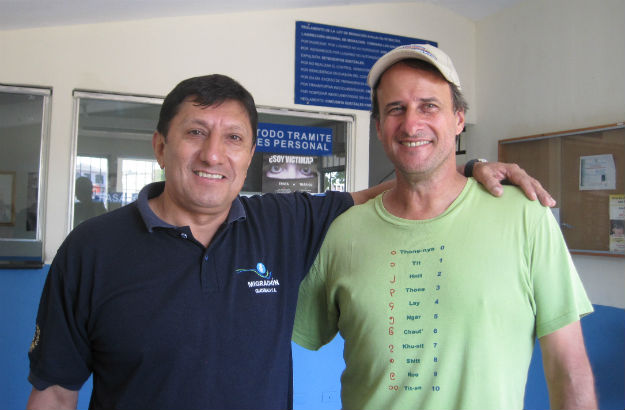 This is a continuation of the previous post where we hitchhiked from Guatemala City to the border.
We walked to the border, handed our passports to the Guatemalan immigration officer and without looking up, he says we have to pay 10 quetzales each, about $1.50.
I was waiting for this. An Aussie traveler told me she had to pay 250 pesos (almost US$20) as a so-called exit fee to leave Mexico by land. I didn’t pay anything when I left Mexico by land, and I knew one didn’t need to pay Guatemala to leave by land either. My guard was up.
“For what?” I asked.
“An exit fee”, or I forget how it was put in Spanish.
I said I had never had to pay an exit fee in all the times I’ve been to Guatemala, which was just bluster, and started jabbering in fast Spanish. (My Spanish is very annoying. If you don’t speak Spanish, it sounds fluent and impressive. If you speak Spanish, you wonder how someone can have such bad grammar and yet speak so confidently.) He thumbed through my passport, maybe wondering how I can claim to have so much experience with borders when I don’t have other Central American stamps in it. He still wasn’t looking at me when he raised his hands a little, exhaled, and the moment passed. It was a capitulation so quick I didn’t realize it had happened and only knew it was a ruse after he stamped our passports.
I left my friend in the waiting room and walked back to the main road to change the last of my money. When I came back, my friend and the same immigration officer were having a chummy conversation in English. I wasn’t expecting that. He had lived in Boston and missed the States. He joked about asking me for the 10 quetzales, saying that he was surprised I protested so much over less than two dollars. He said, “What am I going to do, twist your arm if you don’t pay?”
I said that I had asked other travelers and no one had paid, adding the story of the Aussie girl and the $20 fee on the Mexican side. He was surprised, but he didn’t say, “That’s wrong!” He said, “That’s too much!”
He was all smiles and I knew it was a good time to ask to take his photo. He eagerly gave me his email address and phone number as if we’re new BFFs.
Some people who know me think I would argue for hours over two dollars, but I wouldn’t. I was prepared to pay something; it’s why I didn’t change all my money before I got to the border. I would have, however, asked for a receipt, and if they don’t give it or it looks half-assed, you know they are just lining their pockets. I did take a long look at the cool signs in the immigration office’s bathroom that would probably go for a pretty penny on eBay, but I wouldn’t do that either.
Also, I hate this corruption no matter how small. So many border guards around the world abuse their power, taking a little bit here and there all day long from everybody passing through just because they can. I’ve experienced it plenty of times and while hitchhiking, truck drivers are always telling me what it’s like, where if you don’t flash a twenty dollar bill to the customs guy you will stew for hours or days.
(Update: Just as I was about to click “Publish” on this post, I did some research and it seems a Mexican exit fee is legit after all depending on how you entered the country and how long you stayed. You don’t need to pay on the Guatemalan side. My rant is partially misplaced.) 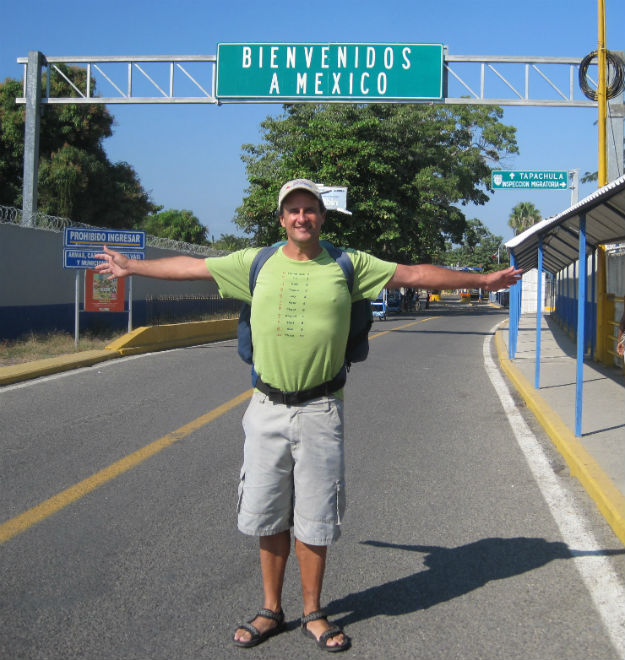 On the bridge between the Tecun Uman/Ciudad Hidalgo border. Nice to be back in good ol’ Mexico! How far to the nearest mole enchiladas?

We got a couple of quick, short rides to the outskirts of Tapachula, and then our hitchhiking luck ended. It was a long, hot, and difficult wait to get anywhere in Chiapas state. Is it because Tapachula is a famous smuggling point? The Death Train illegal immigrants? My frustration was compounded by the knowledge that I was on one of the fastest, least-traveled highways in Mexico, and when we did get a ride it was with a super slowpoke who not only slowed down every time he talked, he would hit the brakes every time we said anything. Of course I’m thankful someone would give us a free ride, but this was maddening.
After another long wait a doctor drove us a nice stretch into Tonala. His idea of entertaining us was to show photos on his phone of his previous car that he completely totaled when he fell asleep at the wheel. He didn’t get a scratch on himself, which I was supposed to be impressed with but was instead alarmed it might happen again. I kept slapping him on the shoulder, “You’re not tired now, are you? Feel good? Huh?”
Tonala is a tourist-less little town that boasted policemen on Segways. Guatemala City police also have Segways. You know your local government is wasting their money when it’s spent on Segways and top-of-the-line new trucks.
The next day it was even hotter and more difficult to get rides. It took four hours just to get 20-30km out of Tonala. Brutal. If these had been our first attempts at hitching, my friend would never agree to keep trying.
Our strategy up to this point was to discriminate heavily, only holding out thumbs for late model cars and roomy SUVs, but when the rides are slow to come you loosen your standards, maybe go for anything clean, and then you know you’re in trouble when two-door VW bugs look good. As delirium set in, half drooling from the heat and lack of food, I tried to get rides from armored cars, garbage trucks, motorcyclists and tricycles pedaling by. 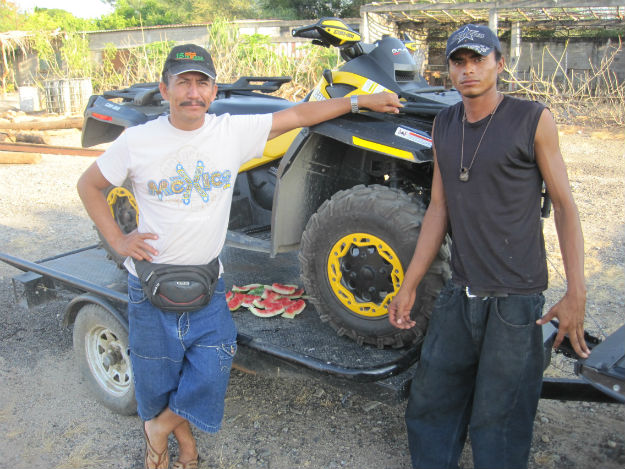 A mango farmer on the left saved us with a ride of over 400km all the way to Oaxaca. It took eight hours, most of it conversing in Spanish, which was exhausting as he had unlimited energy. He ended every sentence with “Guero!” which means something like “gringo” or “dude”, but to me it meant “wake up!” I was trying to nod off in the back seat, but he kept wanting to talk about everything under the sun. He was an impressive man of nature, telling us about all kinds of trees, and very generous, stopping to buy some watermelon for us and then dinner, refusing my money.

The last day, Oaxaca to Mexico City, we spent 10 pesos (US 75 cents) to take a share taxi out of Oaxaca town to the highway entrance. It was the only money spent on transport the entire trip, which was fortuitous as for some reason I let the money get low and we were traveling to the capital with less than US$10 to our name—plus we had no place to stay. You’d think it was my first time out of the house. 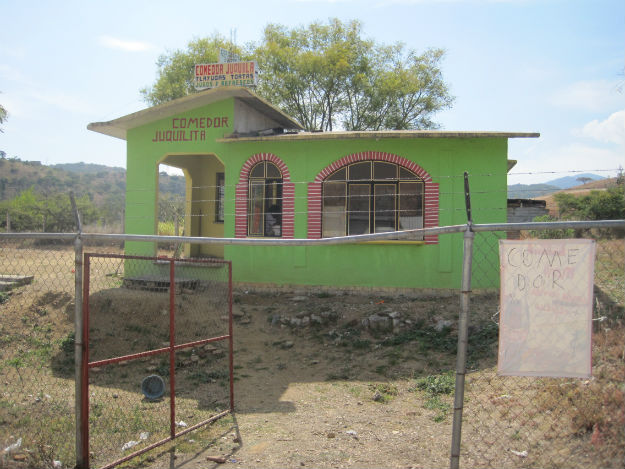 This was a bizarre place to have lunch. I was hanging out by a highway rest area bathroom (don’t judge) and a guy told me to eat at a comedor behind another bathroom across the street through a hole in the fence that had no other access. The chef said we were the first foreigners who had ever eaten there, and it was delicious.

We got a dose of good luck in the afternoon, a 450km (275 miles) ride straight to Mexico City in the back of a truck. For almost the entire distance we saw hundreds of people running along the highway in a relay with a torch and as we got closer to Mexico City, there were literally thousands of cyclists. They were religious pilgrims heading to town for Our Lady of Guadalupe Day. The next day a newspaper reported over six million people attended.
We arrived in Mexico City totally exhilarated from this great feat, hitchhiking four straight days from Guatemala City to get here, a distance of about 1450km (900 miles), but we were exhausted, starving, cold, and without money. (Lisa, thanks for sharing the punishment!) We eventually stayed at a hostel that made me suddenly hate everything about traveling. But that’s next time…
Practical information
Hitchhiking out of Mexico City or along the Veracruz-Puebla-Mexico City highway is a different game than the north-south Oaxaca highway or anywhere further south or east. There are few good places to stand where the cars can pull over safely, even near the casetas (toll booths) because the highway is too wide. No divine restaurants behind public toilets either.
Why don’t you stay with me? You can follow along with RSS or subscribe to an email feed.