I tried unsuccessfully to find a Couchsurfing host in Istanbul. I guessed I was too last-minute, but just after I decided to go the hostel route, three people saw my open request and offered me a place to stay. One was from a guy in his 20s who said we would have to share a double bed. I think it was a legitimate offer, just some dude who wanted to help me with a place to stay. I doubt he is pining for a guy in his 40s, though I guess I should change my Couchsurfing profile’s Current Mission to something other than “Bear looking for cub”. (Too early for a gay joke?) 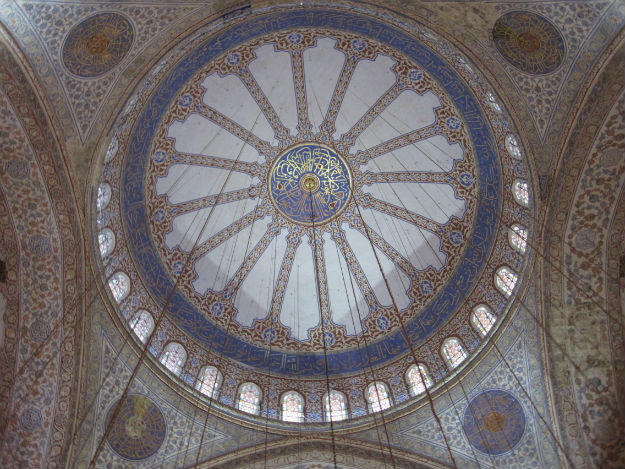 The Blue Mosque. Notice how nice and bright the interior dome is? If you follow the middle chain upwards, you might make out a metal triangle with three spheres—wait, let’s go to a fuzzy closeup photo… 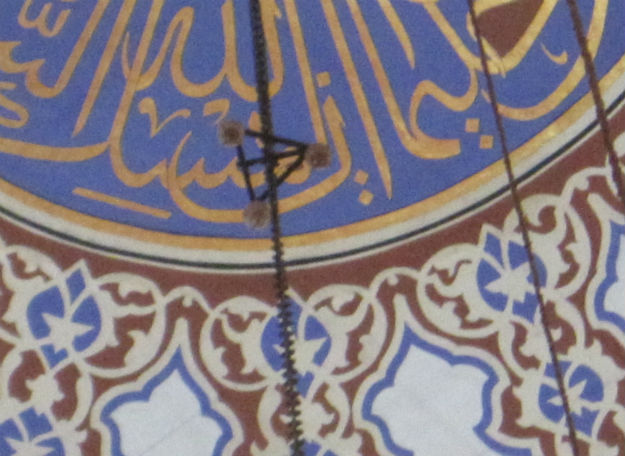 Those are empty ostrich eggs which are said to repel spiders from making webs. Now you know.

In Istanbul I did something twice I normally never do but which other backpackers do all the time. Have a shower? No, I booked hostels online. The difference in price forced my hand, but there is one niggling issue with booking online: you can’t see and don’t know exactly what you are getting.
I used hostelbookers.com to reserve a single room for 19 euros, which is the cheapest I have found in Istanbul. This was at Second Home Hostel, whose own website says a single room is 25 euros. I’ve stayed at that hostel twice before and it’s on a busy street. I am an awful sleeper so it would be worth knowing if I was getting a quieter room in the back. (I like that hostel. The guys working there are great, but the basement dorm room is pure dungeon.) Another problem with not knowing what you are getting when you book online is you don’t want to have the eighth bed in an eight-bed dorm which is probably by the leaky toilet with the noisy door. Most people in their right mind don’t want any bed in an eight-bed dorm, myself included.
The next time I needed a hostel I did it another way. I went into Antique Hostel and checked out a 12 euro, four-bed dorm room, and then on a whim I went on their own website and saw I could book the same room for 10 euros, so an hour later I marched back in with a reservation and a shrug by the front desk guy, saying that this is the way it is. The two euro difference amounts to $2.65, which doesn’t sound like much, but is enough for lunch if you know where to go. For a dorm bed, it’s the best value I know in Istanbul. I shared a four-bed room with a nocturnal Argentine woman who I suspect resented me being the only other person in the room and politely wished me to die in my sleep.

Boring story time!
The Antique hostel is a couple of streets below and east of the Blue Mosque in an area that used to be a backpacker ghetto and has now gone upscale with boutique hotels and fifi restaurants. The gentrification has spread until just before the very last scruffy little street, Terbiyik Sokak. A zillion years ago on my first visit to Istanbul I stayed at a family-run place on Terbiyik Sokak that had a big backlit sign which read GEUST HOUSE. I then went to a Galatasaray soccer match and promptly got pickpocketed, losing everything. (It’s still the worst thing ever to happen to me while traveling. The second worst was having all my film destroyed by a country that shall remain nameless and the third worst might be a bland meal in Malaysia.) The man of the house let me stay for free until I got my passport and money back five days later to repay him. (During that time I had $20 to my name and ate lahmacun, a sort of Turkish pizza, almost exclusively for five straight days; even now it is hard for me to look it in the eye.)
Every time I return to Istanbul I always try and stop by to say thank you to the man, but I’ve never seen him as the “geust house” closed long ago and no one has ever answered the door. Until this time. Now there is a Chora Guesthouse sign out front and I saw him on his step. He doesn’t speak English but he motioned for me to knock on the closed market shop below to communicate with someone. I was excited to finally be able to contact him, but when the rolling metal door rose up, I could see an enraged man yelling at an Asian woman who was trying to get out. She lunged toward the door and he blocked her way, shoving her back against a rack of snacks. He tried to speak with me but couldn’t finish a sentence without having to try and keep the girl from leaving. When I finally started to speak, he interrupted to say, “Do you have a reservation?”
I said no, and, very irritated, he said they were full. He turned away, the metal rolling door came down, the old man disappeared and I stood there trying to make sense of it all. 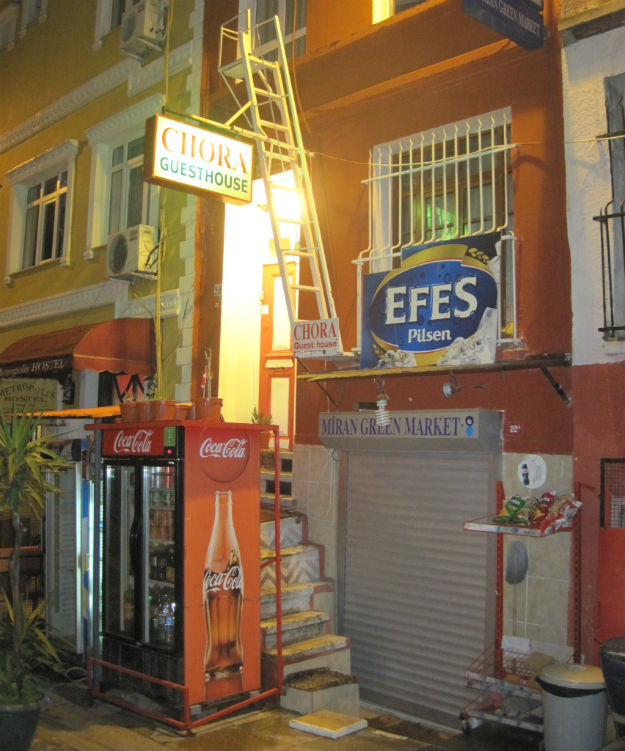 Chora Guesthouse with the store below

It’s not the only odd place on the street. Across the way is another hostel I’ve stayed that had almost all Japanese travelers. I shared a dorm room with three anti-Japanese Japanese. They spent their time in Istanbul standing in lines for free food from a soup kitchen for the city’s homeless to complement their free Hare Krishna dinners. One evening I came home to them cooking on a bunsen burner in the dorm room on the shaky top bunk’s mattress, the flame wobbling with the shifting weight of the guy on the bed. If there was a fire it would be all over for us, the hostel, and probably the entire neighborhood due to the tight little streets with the firetrap buildings.
I went in to have a look and when I came back outside, at the Chora Guesthouse I saw that the rolling metal door was up again and the same Asian woman was now next to the step, alone. I don’t know what was going on. It’s just a weird street. Next door is the Metropolis Hostel. This is their message on the hostel booking websites: “Please Note: We welcome travelers of all ages. We ask, however, that travelers over 40 years old book into private rooms, and not shared dorm rooms.”
Oh, is that right? Now why would that be? I am scheming to get a fake ID on Khao San Road showing I am 39 (“Born in ’74, punk.”) and infiltrate the dorm room. Then I will pour the contents of my colostomy bag over the head of the guy who wrote that. Only then will justice be served. On this day, though, I wasn’t in the mood for a confrontation and I think I have collected enough memories from that street to never go back. 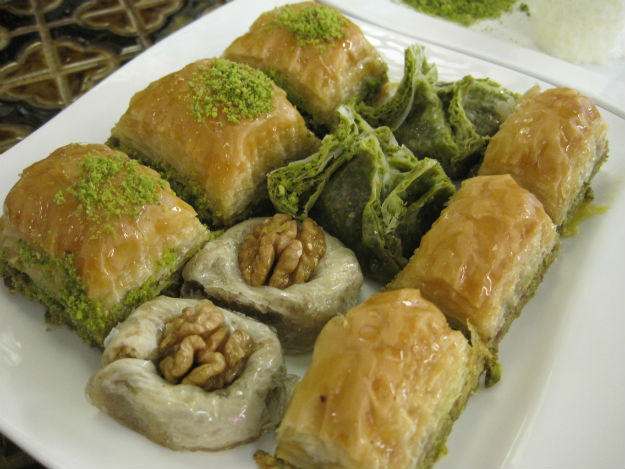 Fresh baklava from Gulluoglu in Karakoy. 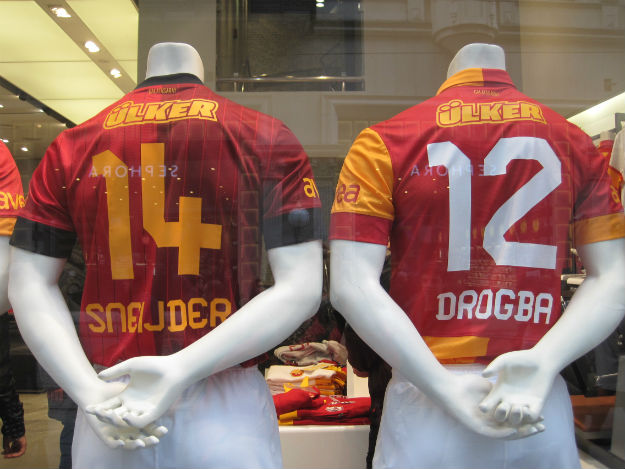 Galatasaray soccer fans are eagerly awaiting the duo of Wesley Sneijder and Didier Drogba. When Drogba arrived it was like the Pope had arrived with live TV coverage of his car making his way to town from the airport. 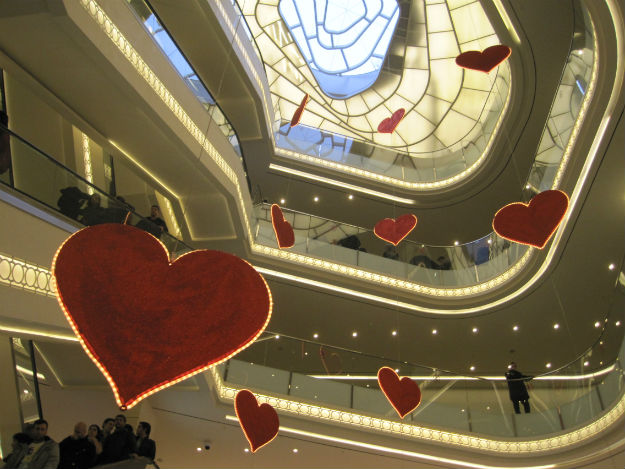 A shopping mall in Taksim 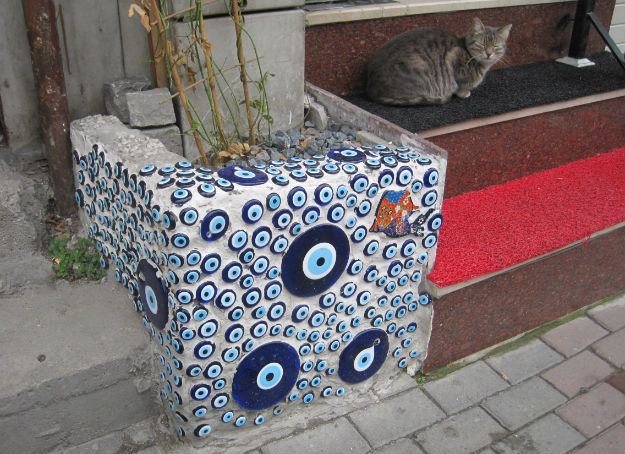 I’ve been around the block and I suffer under the delusion that my opinion carries weight, so bear with me when I insist that Istanbul is one of the world’s great cities and must be near the top of anyone’s list of places to visit. Throughout history it has been a convenient, strategically-placed hub, and today it is cheap and easy to fly here, reasonable value both food and accommodation-wise, it has history in spades, it’s safe, and the food is excellent.
Do I need to continue? Turks are solid people, friendly, but they don’t care about you enough to be obsequious, which is what you want as a traveler. Geopolitically, few countries are as interesting as Turkey, and domestically there is the quiet battle brewing between secularism and those wanting an Islamic state. All of this can be contemplated over tea on a scenic public ferry ride between continents on the Bosphorus. There is a lot to learn and soak in, but the Istanbul Tourism Board isn’t sponsoring this blog post, so you’ll just have to take my word for it.
Why do so few Americans visit Turkey? Believe it or not, a 35-year-old movie called “Midnight Express” about an American backpacker who traveled to Turkey, tried to smuggle out drugs, and his subsequent hell in a Turkish prison has prejudiced the views of quite a few Americans for a long time. I have read, but can’t confirm it on the internet, that in the 1980s when the American government wanted to twist Turkey’s arm for diplomatic reasons, it would threaten to have “Midnight Express” broadcast on American TV which always scared off tourists and sullied Turkey’s reputation. Maybe it’s urban legend. Do you buy it?

Practical information:
Like Lufthansa before it and Qatar Airlines most recently, Turkish Airlines is the airline of the era that is flying everywhere. South Sudan and Somalia, anyone? They have deals on their website through a program with the vomit-inducing name of Wingo.
Turkey also has an excellent regional discount airline, Pegasus, based out of the Asian-side airport, Sabiha Gokcen, and many airlines fly to Turkey very cheaply from Europe. Plus, Istanbul is a cheap connection with Air Arabia and flydubai to head eastward.
A multiple-entry, visa-on-arrival for Americans is $20, same for most countries which need a visa.
If you want to see nicer Istanbul photos from a more able photographer, check out Stephen Lioy’s. 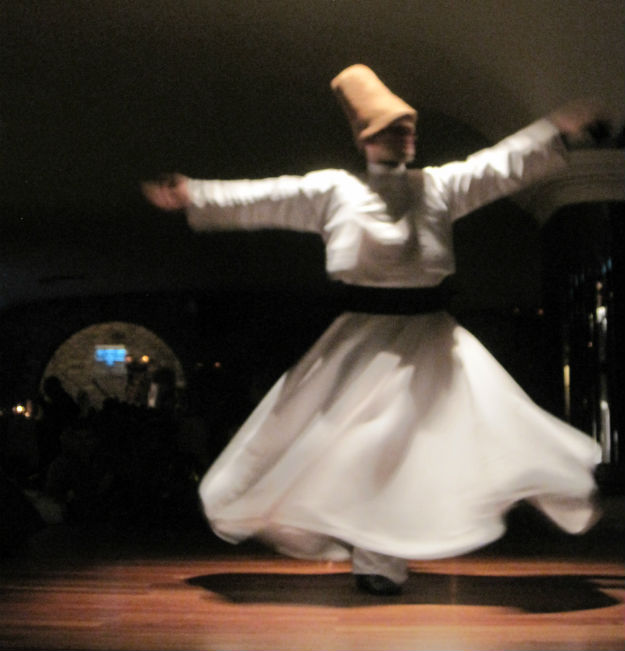