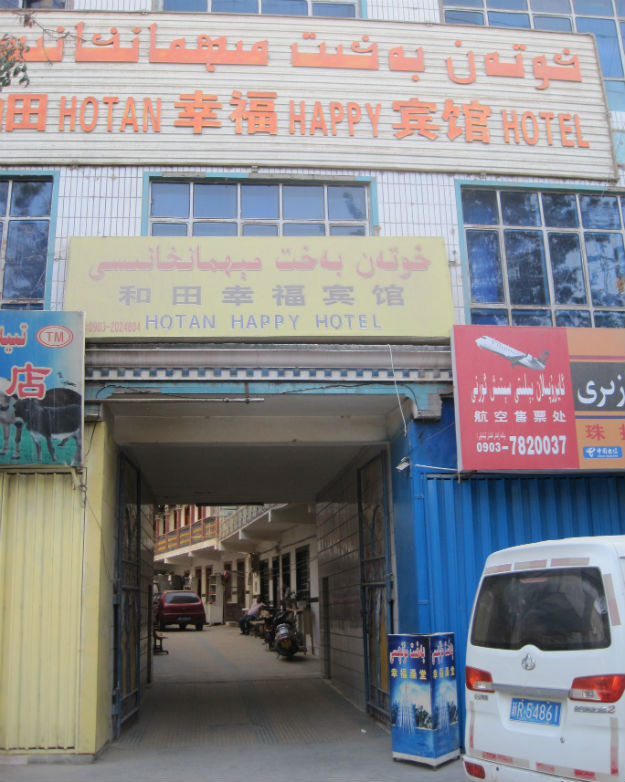 The Happy Hotel was so sad I was ready to hang myself, but I couldn’t decide to whom to bequeath my baseball card collection.

After a long stay in Kashgar, I went to the desert. Hotan was an eight hour, 33 yuan ($5) “hard seat” ride, it’s called, but the seats weren’t so hard. The train was, however, filthy as all hell by the time we arrived from sandstorms blowing through the windows and the garbage piled up on the floor. (Hotan has an enormous train station, bigger than the White House. How busy is it? One train a day.) Little did I expect that the train would prepare me for my hotel…

Hotan Happy Hotel
Congratulations to the impeccably-named Happy Hotel in Hotan (aka Khotan, aka Hetian) Xinjiang province, western China, for vaulting into the Top 5 Worst Hotels Ever status. Well done. Competition has been fierce over the years, but it is a very worthy honor. Take a bow.
The owner said he had other rooms, but mine was in the best condition and he didn’t even want to show others. The best condition! Condition is a temporary thing. They didn’t even try. Cigarette butts were on the floor, garbage was in the corners, the toilet wasn’t even wiped off.
The only other lao wai on the train came with me to check out the hotel. He thought it was OK, that he’d stayed in worse in Bolivia—as if that should be a basis for comparison, and I’m sure he didn’t pay $13 for the privilege. Part of the reason accommodation is expensive for what you get is because often only a few hotels in each town will accept foreigners.
By the way, next time I hear someone defend that China charges American citizens the same price for a visa as we charge them, I will counter, does USA allow you to stay in the country only 30 days (and you can’t renew)? Are you restricted in what hotels you can go to? Do you have to register with the police? How many “sensitive areas” are there where you need special permits that you will never get? Do you see military encamped around town like here? 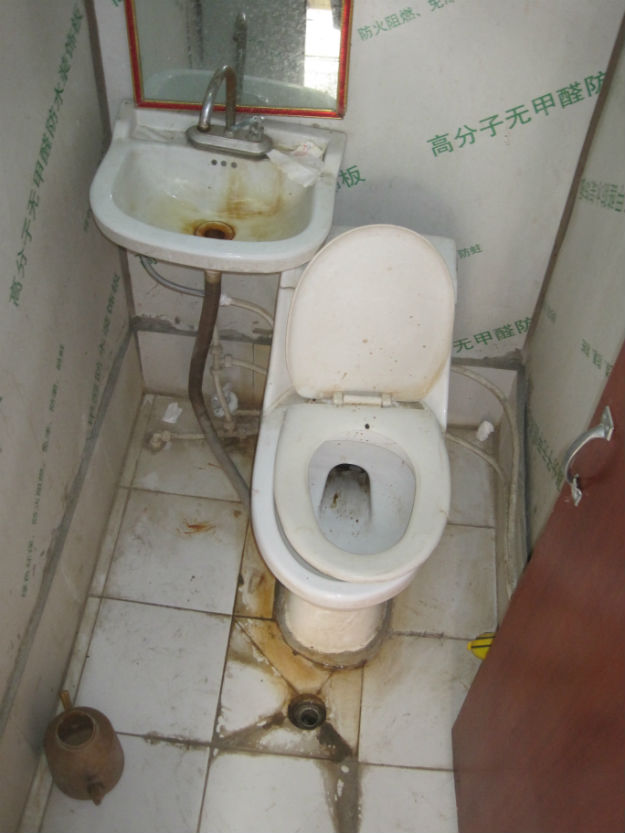 I was so encrusted in thick dust from the train ride, I had to take a (cold) shower here. Gulp. Even in normal hostels I curl my toes up with my rubber sandals on in the shower. What do you do in this? 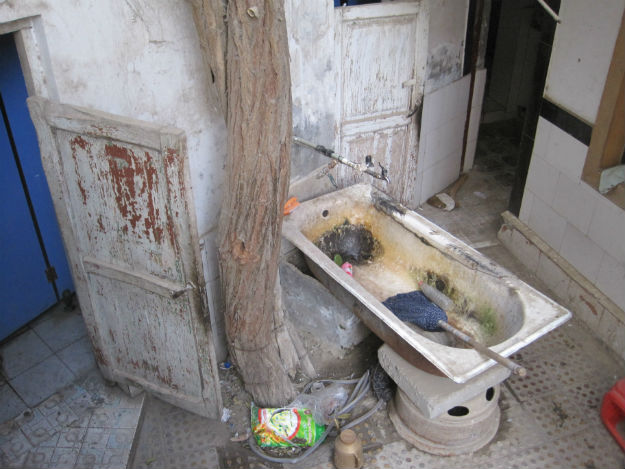 This is the bathtub where foreigners wake up in ice with a note saying that they no longer have a kidney. 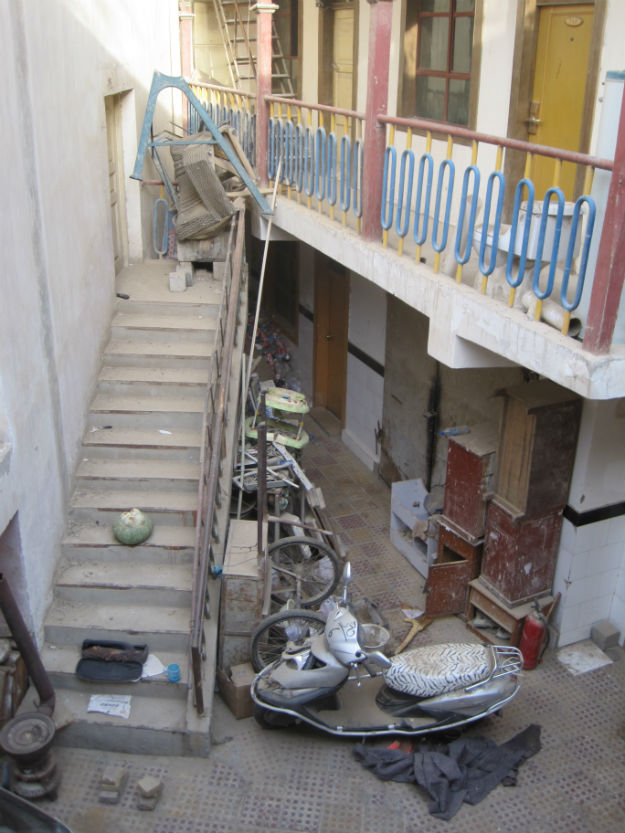 That’s some nice carpentry there. 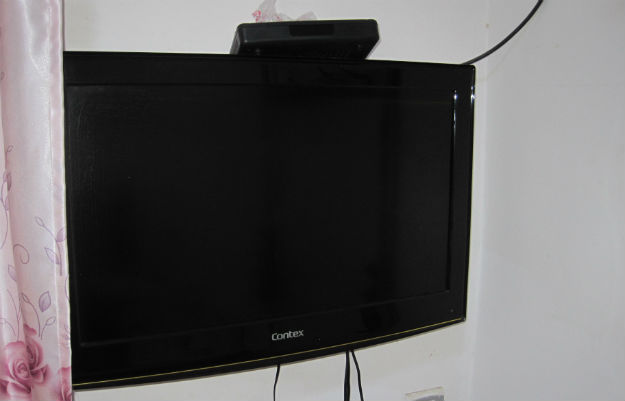 When I left the next morning (“checked out” is too fine a word for such a dive), I saw the owner’s wife holding her baby girl while chatting to someone next to her, and I had to do a double-take to notice that the baby was naked and had just taken a dump. The woman was nonplussed by this as it lay there in a luminescent pile, glistening on the driveway, irrefutable evidence that the kid needs to eat a titch less fiber.
Children use the streets and parks as a toilet all the time. In Hotan I saw the quintessential example when a mother held her baby boy in her lap on the back of a flatbed truck used as public transport. The baby peed as it drove by, almost getting me in the line of fire. Treacherous streets indeed. 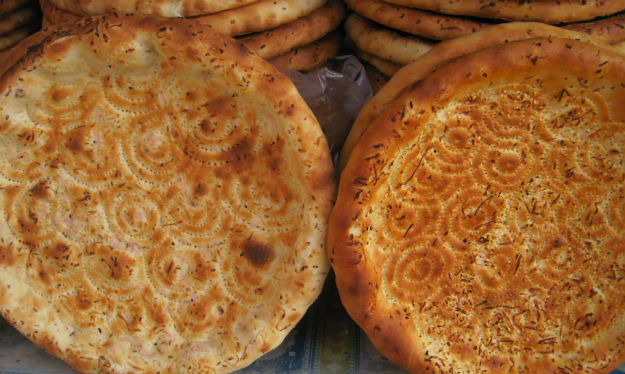 Delicious Uyghur bread, baked in a tandoor, three yuan each (50 US cents)

I can’t remember the last time I was so ready to leave a country. 62.37% of that feeling is me (I’ve been gone seven months now, and if that doesn’t sound like a big deal, try backpacking that long every year for 27 straight years and then tell me how it feels) and 37.63% of it is being trapped in western China with no trains or planes out and not relishing epic bus rides just to get anywhere. It’s like being stuck in Winnemucca, Nevada. Plus, I’m ready to pummel the next person who coughs in my face.
I’m running out of steam and I’ve become irritable, so there’s not much fun in traveling. It’s kind of interesting to be in Hotan, but it suffers from Kashgar Syndrome: it feels like I’m in the middle of a Chinese experiment in urban planning, a place in transition meant to marginalize Uyghurs. I heard there was a recent uprising, so there are tons of police, tons of military, the main square is cordoned off with few people inside, there is construction everywhere—it’s time to go. To Japan.
I’m not down on China. I had a fantastic time my previous visit along the east coast and came away impressed, thinking how genius everyone is. I’m down on a lot of things the Chinese government does, but I’m down on a lot of things the American government does; it’s no reason not to visit. Every American should visit China. I used to say that about India, mostly as a personal challenge, but China can be equally difficult and it can only be good to try and have an appreciation and understanding of it.
I was curious about visiting Urumqi, the capital of Xinjiang province, also said to be the town farthest away from the sea of anywhere in the world. The Prime Minister of Singapore is there now. Singapore was China’s model as it concerns social engineering (I hate that term) and dampening dissent, but now China is the example as well as for economic growth. I’m in the camp that thinks the only thing that can stop China’s ascent is democracy. 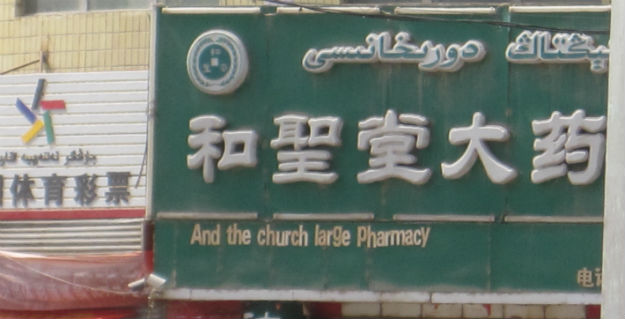 In most countries this would be Sign of the Month, but in China, it’s only Sign of the Week.

The check-in agent in Hotan’s airport only gave me boarding passes to Beijing, which deflated me. It meant that for my 15-hour layover in Beijing I would be spending the night in the check-in part of the terminal and not in the cozy, spacious transit area. I knew this was a big difference since I had a 15-hour layover in the same airport last year.
Imagine if I had lost my passport before I made it to the airport in Hotan. The nearest American consulate is in Chengdu, several days of traveling away. You can’t check into a hotel without a passport, you can’t take a train without transport—my despair would provoke me to immediately hang myself without caring who got my baseball cards.
Beijing’s gleaming, shiny new airport is said to have the biggest terminal building in the world (to go with the world’s biggest building, opened last week, a shopping mall in Chengdu). If you thought that being in such cleanliness might make Chinese behave differently, I found while walking in circles looking for an available chair that they still clear their throats with gusto and spit on the floor like anywhere else.
There aren’t many electrical outlets in the airport so everyone huddles around them as if the current was methadone. At 4am an American guy approached me to ask if there was an outlet available for his laptop. He made a show of being tired, exhaling to say he’s been on the road since July 5—seven weeks, he computed for me, to emphasize it. I gave him my Clint Eastwood stare. Trying to impress me at 4am with this achievement in my half-stupor wasn’t going to work. I was about to hector him that he was barking up the wrong tree, but I let it go. He’s a young American traveling. I need to nurture these guys. I unplugged. 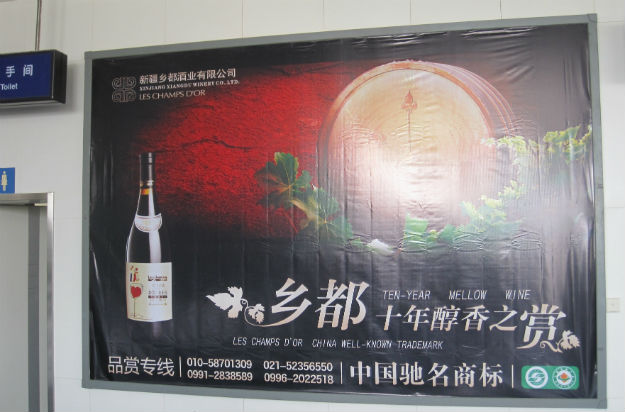 PRACTICAL INFORMATION
I used 10,000 United Airlines frequent flyer miles to go from Hotan to Tokyo and paid $22 in taxes plus a $75 penalty for using the miles within three weeks of my flight. That is a recent fee from United as is the $100 fee every time you want to change the date despite the ticket being valid for a year. (Teeth gnashing.)
The important thing to remember is that I am using 10,000 miles to go from Country A to Country B, China to Japan in this instance, which means I could go from anywhere in China to anywhere in Japan. Use the miles where it would normally cost a lot to fly to if you are touring around, or fly to one end of the country and then make your way back.
Young Kent Foster would have flown from Hotan to Ishigaki island in the far, far south of Japan, farther south than Okinawa, farther south than Taipei, Taiwan, in fact. It’s the end of Japan, and from Ishigaki I could have used one of two airlines flying there as a new route, Skymark and Peach (Hey Peach, Japanese credit cards only?! Come on, it’s 2013 already!), to get back to the mainland cheaply. But Young Kent Foster, like Elvis, has left the building. It is typhoon season in southern Japan and I got put off by reading about beaches you aren’t allowed to swim at and similar nonsense.

Classic! “In order to serve you better”, we will charge you US$10 to change money. Beijing Airport.