This is my 12th time in Japan. 12th time! Who visits Japan twelve times?! By now I should be Japan Travel Ambassador. 11 times I was here as a tourist, and once I worked for a couple of months in a dog hotel. (It’s a long story; you gotta do what you gotta do to offset your costs here. Lately I began selling my body, but then everyone kept demanding refunds and I had to give it up.)
I do have a cheap accommodation tip for Tokyo, if you’re game. I know a hostel in the middle of town, Shinjuku ward, one of the most happening parts of the city and next to a quiet shrine where you can have your own room for only $20, a steal of a price anywhere in Japan. You won’t find it on any hostel booking engine, there’s no website, and few people know it exists. (Soak that in for a moment: The Dromomaniac giving you more FREE money-saving information! What other travel writer does that? Nobody, because I’m the only one getting my hands dirty down here in the trenches! Or would you prefer 5000 words about what I ate for lunch?) 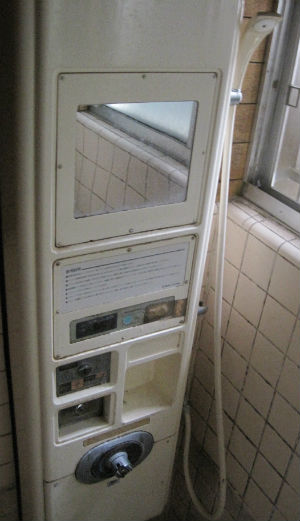 Yes, there’s a catch. It’s incredibly filthy and it feels more like a halfway house than hostel. (Is it too late to write about what I ate for lunch?) I’ve stayed here many times over the years, I’m semi-ashamed to admit, and have written about it before. It might have been even worse before. (The new phone number for the owner, Mr. Suzuki, is 080-5547-5824. I would explain how to call from abroad, but if it is the first place you see when you fly in, you will cry.) Back in the day it was a cool, insider place with a good mix of travelers and people living here, but now it’s all gone to seed.
When I called Suzuki-san this time to see if there was space, I remembered to ask if there was a shower. Sometimes he doesn’t and you have to go to a sento (public bath) down the street. Alas, I forgot to ask if there was a free shower. Now he has this coin-operated shower to the left, 100 yen for four minutes, or there is a free, much scuzzier, cold shower.
This place might not be for everyone. Or anyone. Here are some photos:

Suzuki laying down the law! 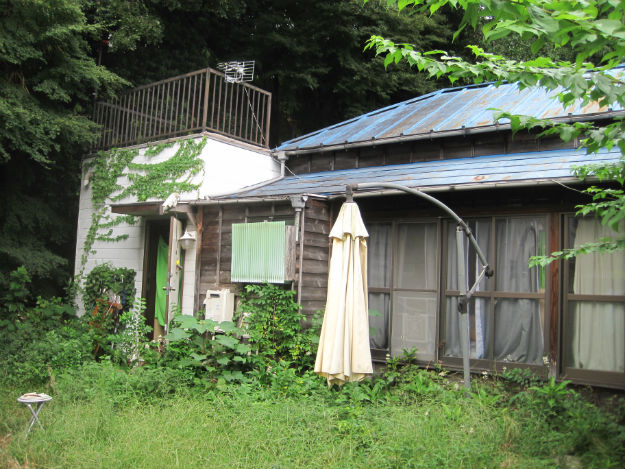 The white building is Suzuki’s cozy part of the estate. 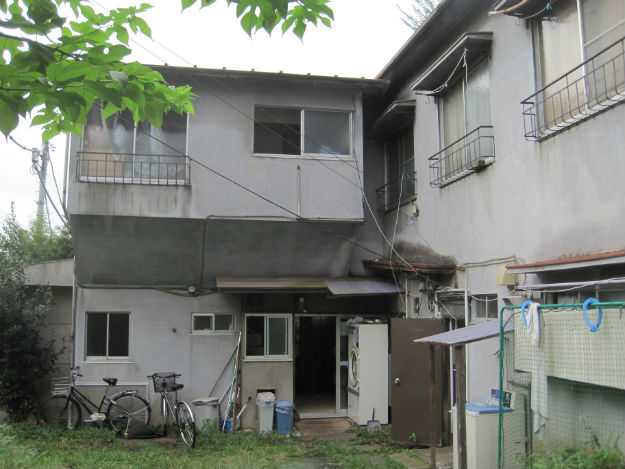 Architectural Digest has short-listed this for a feature. 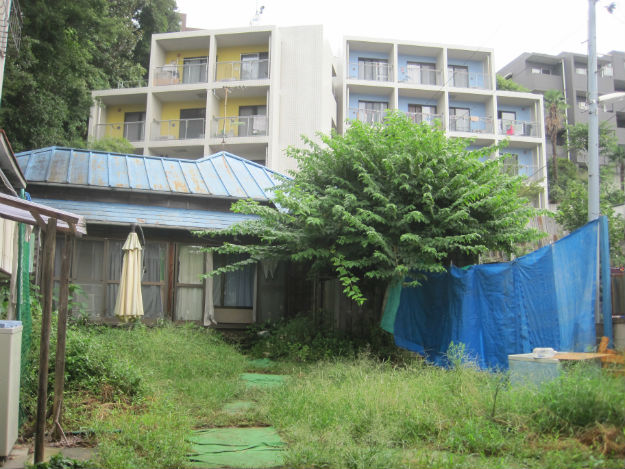 The zen garden. In the background is allegedly what his brother did with his half of the land: build modern apartments. 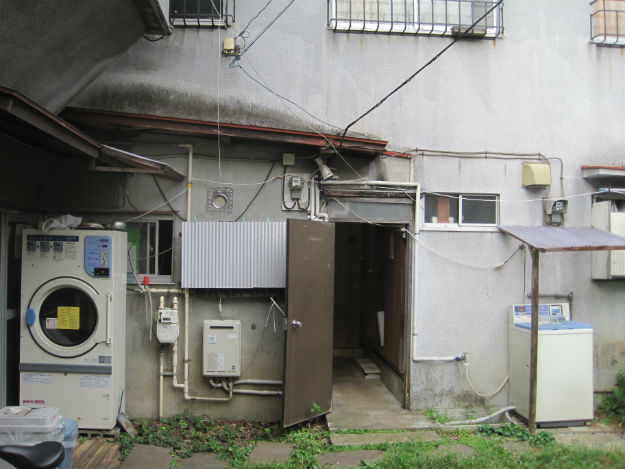 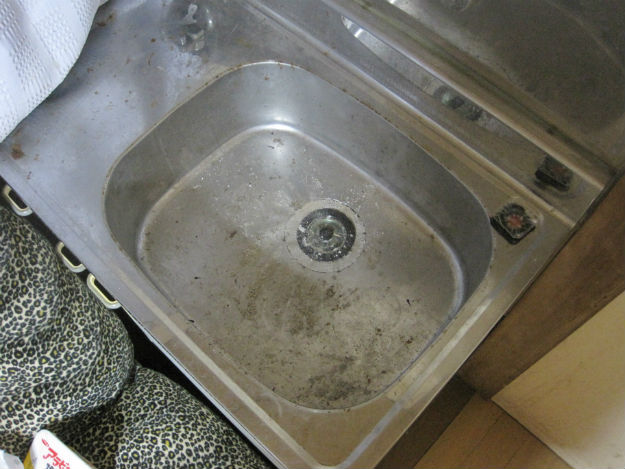 The sink in my room 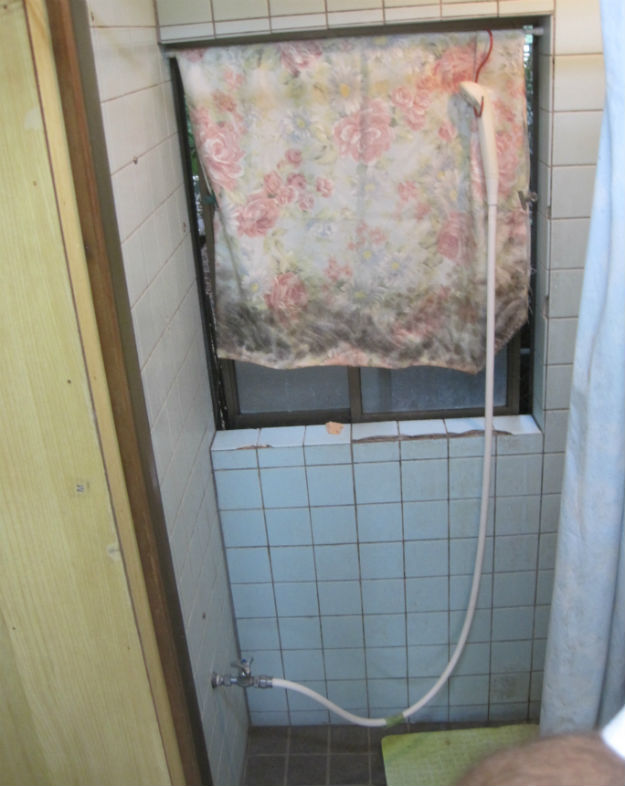 I have no idea what business this can be for. Could be a bar, which are everywhere. When I was in China and I asked other travelers their favorite places, the males would say, “Chengdu,” and then follow with a quieter, almost conspiratorial voice, “and the women drink.” Women don’t drink all over China? It’s a funny thing to mention. If you want drinking women, look no farther than Japan. I can’t think I’ve ever met a Japanese woman who doesn’t drink—to excess, and proud of it. 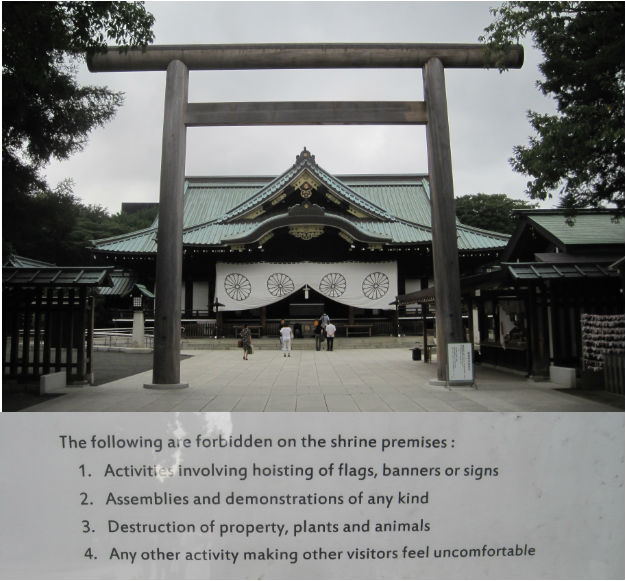 The funny thing about number 4 is that this is from Yasukuni Shrine where politicians visit to commemorate people who gave their lives to help build Japan, including convicted war criminals. It drives China and Korea nuts that they do this and every year it is a big kerfuffle.

Practical Information
The mistake everyone makes when they come to Japan is to buy a railpass, which is unnecessary if you use buses (or hitchhike), but that is a subject for another time when I write the best seller, “The Dromomaniac’s Guide to Japan for Extreme Cheapskates.”
Why don’t you stay with me? You can follow along with RSS, subscribe to an email feed, see what’s cooking on Facebook, pray that I’ll say something worth remembering on Twitter and if you are really slumming it, there’s always Google+.