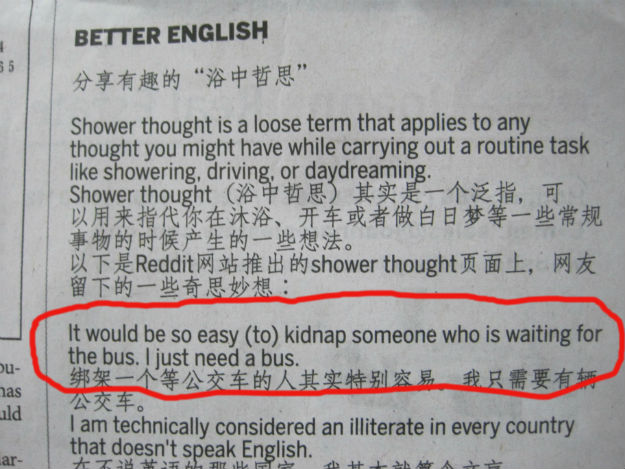 Hey, kidnappers need to improve their English, too. Let’s not be all high and mighty and discriminate. 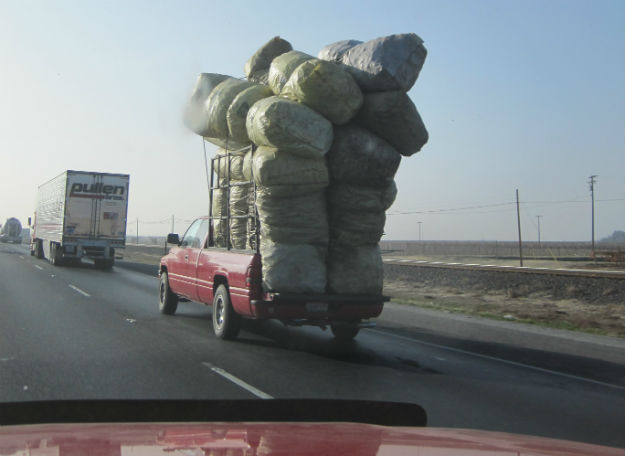 You never see scenes like this in California any more, but driving to Los Angeles to get a Chinese visa, the roads become sinicized.

Visiting an embassy or consulate to get a visa can be such a great introduction of what the country is like. (My most memorable embassy visit might be getting a Yugoslav/Serbian visa in Tirana, Albania, just after the war, but I can’t talk about it now because I can’t be wasting valuable blog space telling good travel stories. You understand.) The Chinese consulate in Los Angeles didn’t disappoint. Normally a consulate is a near-reverential place, subdued, quiet, all business. China’s visa section is a zoo. It’s noisy, crowded, people are yelling, fidgety kids are coughing in my face: it’s all China right there. If you want a whiff of China without paying $140 for the privilege of getting a visa, just hang out in the consulate all day.
I used to live a few blocks away from the consulate in what is called Koreatown, but has since been subdivided into another more distinct area, Little Bangladesh. Add that to your melting pot, Mister! Los Angeles is not only totally underrated, it is one of the world’s great cities. No one believes me when I say it. I will argue this point another time, but again, space constraints. Would you rather have a well-thought out, passionate, articulate manifesto or photos like this: 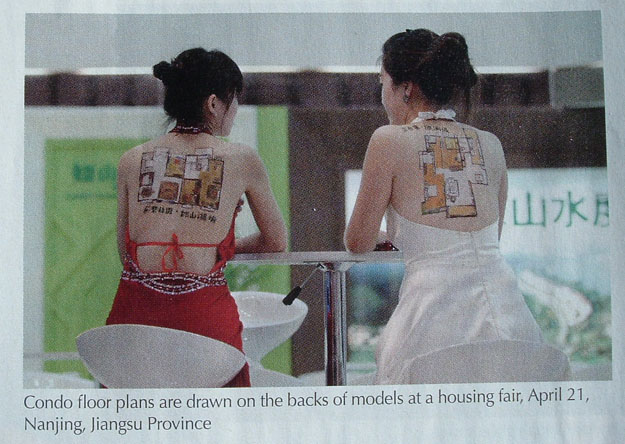 Knew it! This is from a magazine at the consulate: floor plans on the backs of women. I don’t know what to think of this—it’s more than a little demeaning, isn’t it?—but I’m now offering billboard space on the sides of my nose. 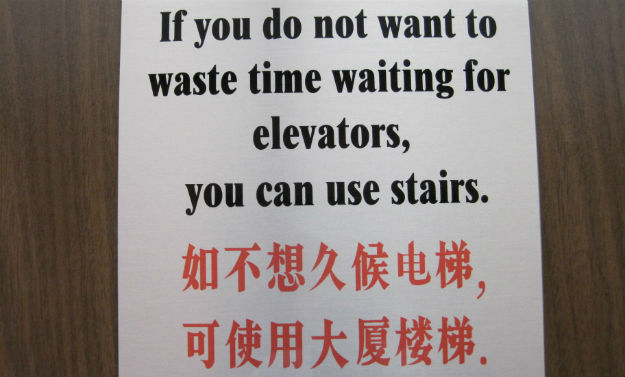 I flew a motley combination of Virgin American and Hainan Airlines to go from San Francisco to China via Seattle. It was my first time flying both which is saying something. Virgin was something different. At SFO you pass by drab check-in counter after drab check-in counter before suddenly coming across the mellow feel of Virgin’s velvet ropes, its inviting deep reds, its subdued lighting, their relaxed agents greeting you like it’s a soiree—I felt hipster, yet looked dumpster.
It’s all so inviting, a breath of fresh air, but their policy of disallowing frequent flyer miles if you don’t book your flight through their website—impossible on my route—is unforgivable. Death to Virgin!
They do have the safety video of the century, which is any safety video that makes me pay attention. The link is here if you can’t see it below: 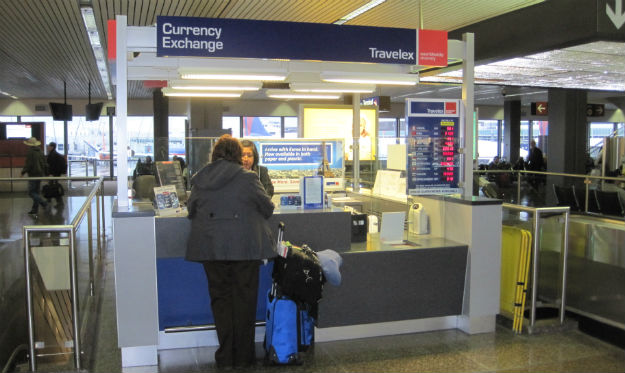 When you see Travelex in an airport, you know the airport sucks. They are the equivalent of the rapacious Chequepoint moneychangers in big European cities with deceptive exchange rate boards (“$10,000 minimum, Sir”), poor rates AND commissions, the unholy trifecta of everything I hate about changing money. Can someone start a website/app where they can show what the airport exchange rate is before we get there? Another free business idea from The Dromomaniac!

(Quick tangent: I thought Vienna was going to hold the championship belt for Worst New Airport for years until Bali snatched it quickly and decisively: no place to change money, no water fountain, flooded toilets, not enough seating, poorly placed signage and layout, and so many garbage boutiques that one has to walk from immigration through the duty free shops, which isn’t a path with the shops on both sides a la Bangkok, but actually weave your way through the displays which is pure cynicism. It’s like they closely studied Singapore’s Changi Airport and then consciously did the opposite. I will only concede that the remodeling isn’t 100% finished. End of tangent.)

Hainan Airlines is said to be a rare “5-star” airline, which is hokum. The only memorable things about Hainan were these biscuits and a flight attendant’s name badge that said, “CHILLY”. which might have simply been a warning of her temperment.

I happened to be in Beijing during record bad pollution. When a storm finally came and the measurement went all the way down to merely “unhealthy” it was cause for joy. Look at how murky the air is at Tiananmen Square.

PRACTICAL INFORMATION:
I got a multiple entry, two-month Chinese visa good for one year for $140, a better deal than the $240, single entry, one month Chinese visa I got in Bishkek, Kyrgyzstan last year. It takes four business days to get. I made a fake onward ticket for the application.
I paid $570 one way to go to China—I’m not happy about it either. Flying cheaply around the world has this one stumbling block: crossing the Pacific. However, someday before I die I will buy a decent video camera, stand in front of a big map, and make a video called, “How to Fly Around the World For Less Than $2000.” Even with $570 flights it’s doable, and I won’t make the dates far into the future to kill the popular myth that you need to book far in advance. Who wants to help me? I just need video, a map, and good looks.