Are people from Tangier called Tangerines? 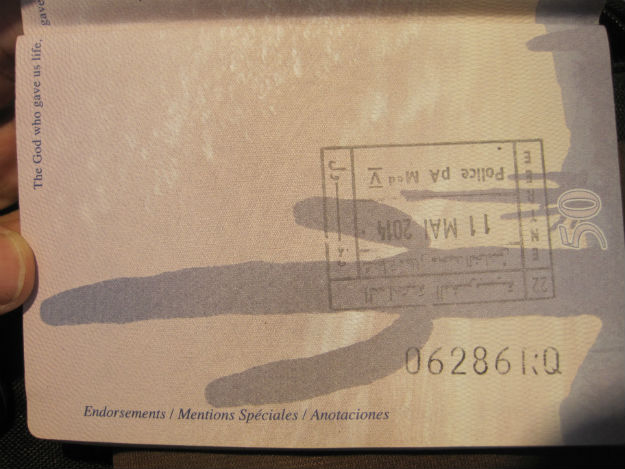 It’s always good when you get a stamp on your endorsements page. It means lazy immigration officers in other countries will also stamp it and you get that one extra page in your passport. Americans used to get extra pages for free, but now they cost $100.

Sometimes I am asked what my least favorite countries in the world are and Morocco always makes my Bottom Three, but I realize I have been unfair to it. Lots of bad things have happened to me here (details at the end), but only one is Morocco’s fault. 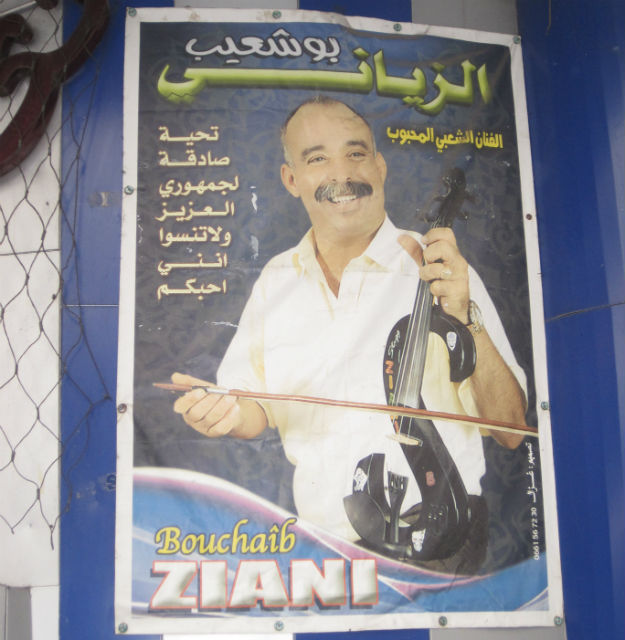 Some people say you don’t absorb the true magnificence of Ziani until you see him live.

Last minute medical tourism
Not long after I landed in Casablanca I noticed spots on my body, then more and more. I kept thinking I had a heat rash or allergic reaction to something, and I got on a train to Marrakech. Normally, taking a train to Marrakech would get me humming “Marrakesh Express”, but I was a lifeless blob by the time I arrived and it hadn’t occurred to me to check the weather forecast: 40C (104F). Brutal. Worse, I was staying at a cheap Airbnb place in a hot room with a rock-hard bed. BRUTAL!
The spots were multiplying, so I shuffled over to the Polyclinique du Sud where I had a consultation for 200. “Dirhams, not euros,” the receptionist joked to me. (8.1 dirhams = US$1) It was late in the day and the doctors were jumpy for some reason. I had two of them. The younger came at me with a thermometer. I opened my mouth and he yanked down my shirt and shoved it in my armpit. He studied my face and said, “Varicelle?” seeking confirmation from me.
“Varicelle?” I was struggling with French. I still had Japanese in my brain, but at least by now I had stopped saying, “Arigato!” to everyone in Morocco. The other doctor came in, also as if he was late for something. He looked in my mouth. He looked at the bottom of my feet and my palms for spots and when I gestured that there weren’t any, the younger doctor slapped at my hand and pointed to one I had missed. The older doctor also pronounced me with varicelle. What the heck is varicelle? We changed to Spanish but “varicela” didn’t help me. I didn’t know what I had until I checked the internet later. I was shocked—and I’m not easily shocked—to have Google Translate tell me varicelle was chicken pox. 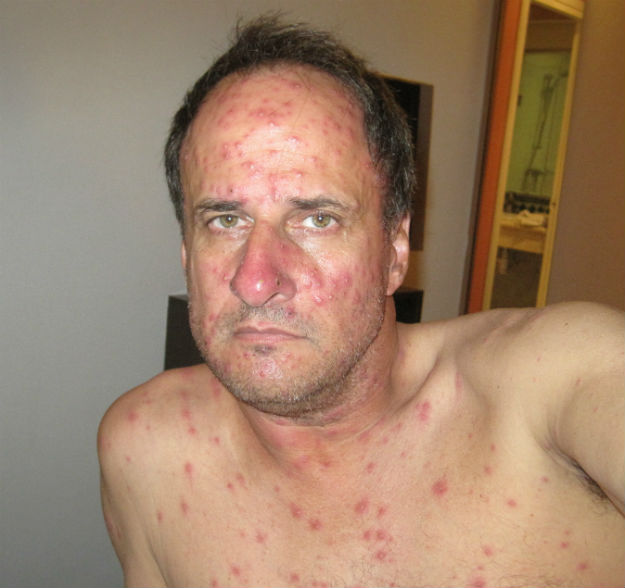 At just about the apex of the pox.

There was one funny thing. The older doctor asked if I was with a woman. A woman? I didn’t understand the context of this until the doctor began punching the palm of his hand repeatedly, then wagging his finger in my face and saying, “No!”
Ahh, I see, no intimate relations. I could only think that if I knew such a depraved woman in this world who would lust for my decomposing body, she would already be Mrs. Kent Foster.
I can’t say I felt ill, just very run down. My scalp felt like a golf ball when I ran my hands through my head, all pockmarked. Worse was going out in public to buy stuff in full Elephant Man mode. My head was down and I avoided eye contact as much as possible. It was humiliating, though Moroccans didn’t seem to care; you see all kinds of deformities and illnesses on the streets.
Morocco may not seem like the best place to come down with chicken pox, but where is? USA? Without health insurance? No. Europe? Same same. Their gruffness aside, many Moroccan doctors have probably been educated in Europe and it wasn’t like a needed brain surgery—well, I probably am due for it—I just needed a decent place to rest. 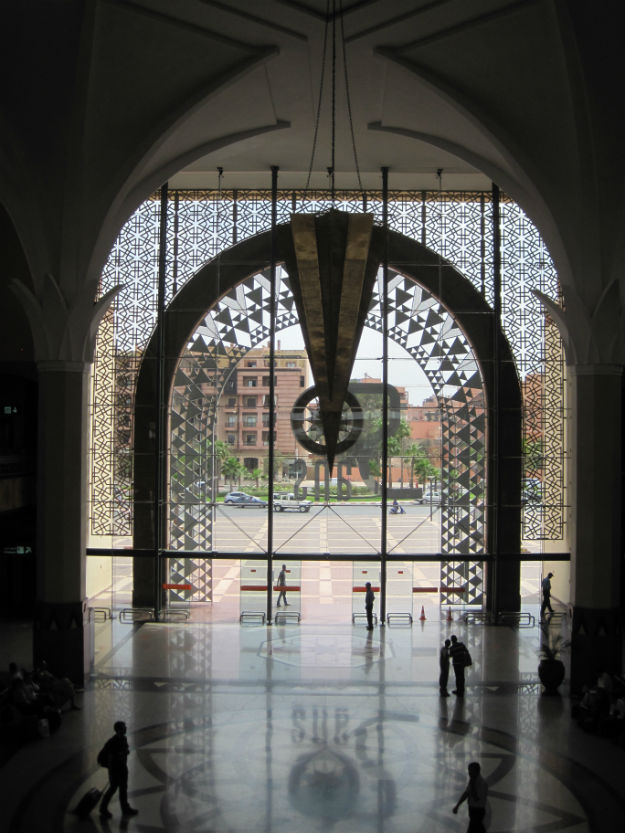 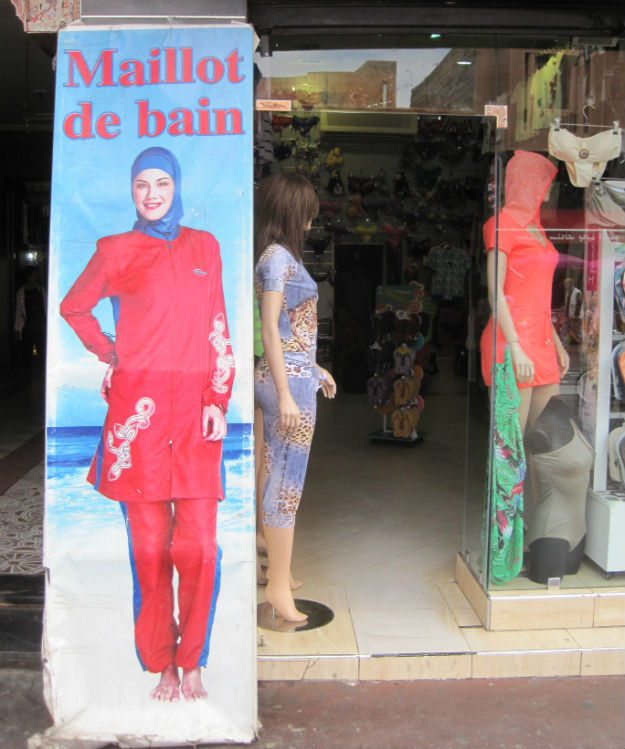 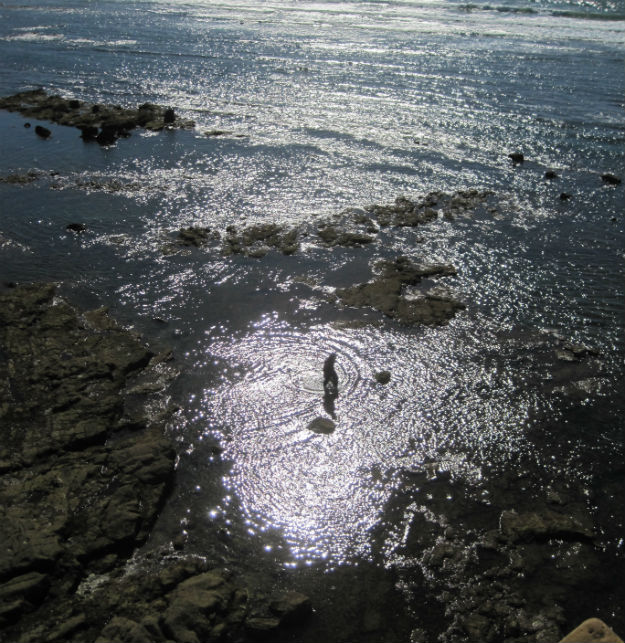 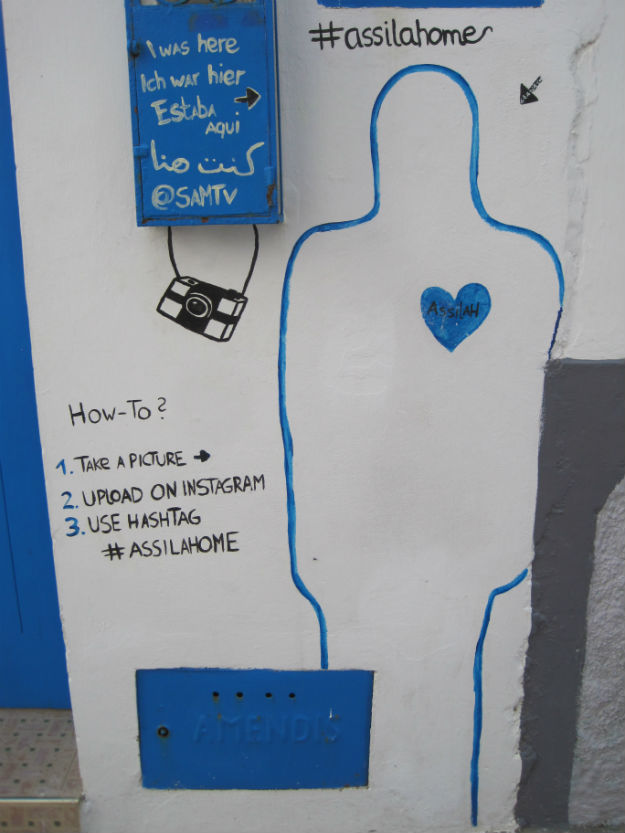 In a small alley in the Asilah medina. 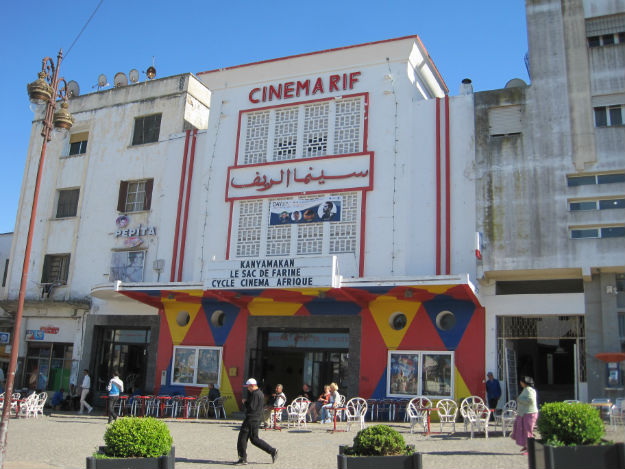 I saw a movie here in Tangier at the very retro and grand Cinema Rif, “Only Lovers Left Alive”, by Jim Jarmusch. It was filmed in Detroit and Tangier, so it was very fun and surreal to see it and then step outside and be in it, so to speak. 20 dirhams ($2.50) for a ticket. 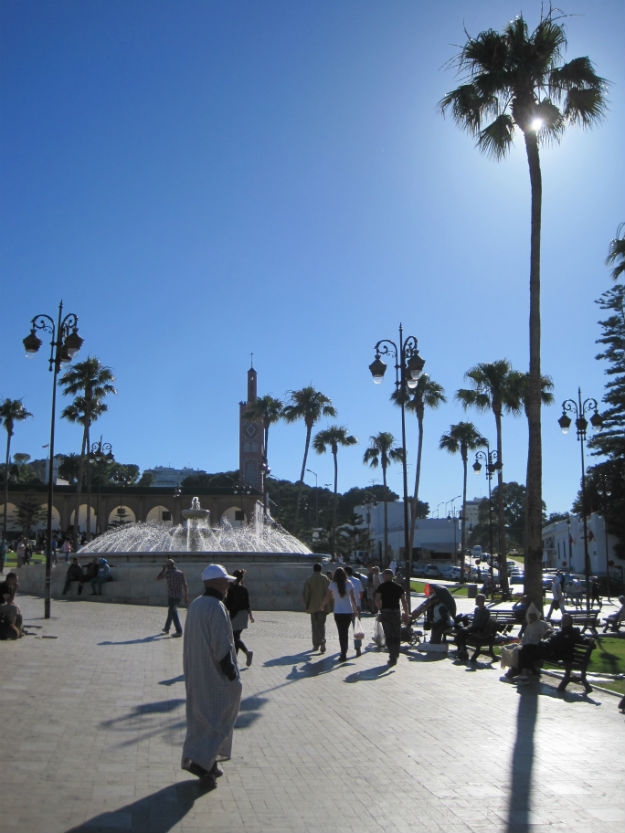 This is just outside the Tangier medina, which is the labyrinth of winding small streets of the old town. Tangier has a relatively modern, new part of town where everyone and everything looks different and you get the feeling the two worlds don’t intersect much. 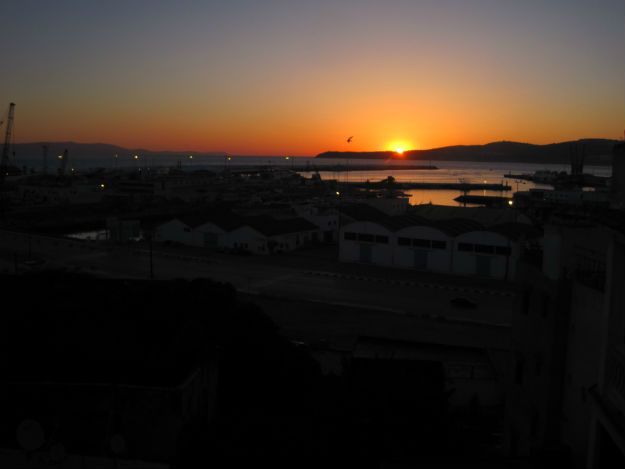 In Tangier I walked into the Vectoria Hotel (the signs outside say “Vectoria”, the business cards say “Victoria”) in the medina and said to the guy working there, “I have a photo of you from nine years ago.” I opened my laptop and showed it from my last visit. He was duly impressed and gave me the best room for only 50 dirhams ($6), he said with a flourish, but the Vectoria has gone downhill and it was a crumbling room of infinite sadness. Boss also forgot to mention that the entire hotel didn’t have a functioning shower. At least I had a nice sunrise over the port as compensation for being unable to sleep. 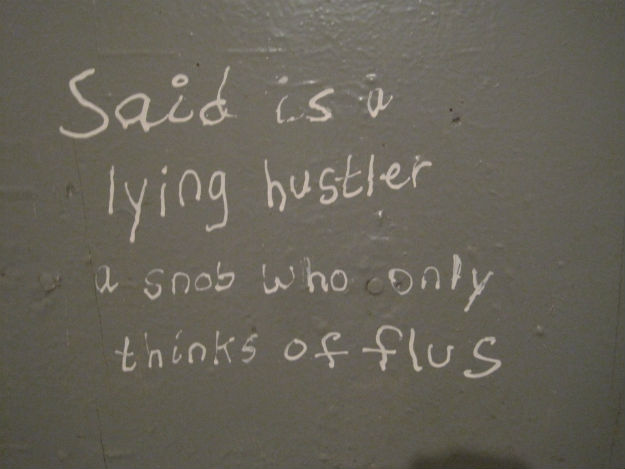 Written on the back of my door in the Vectoria Hotel. I don’t get it either, but I like that they don’t bother to clean it. Maybe the management approves this message? 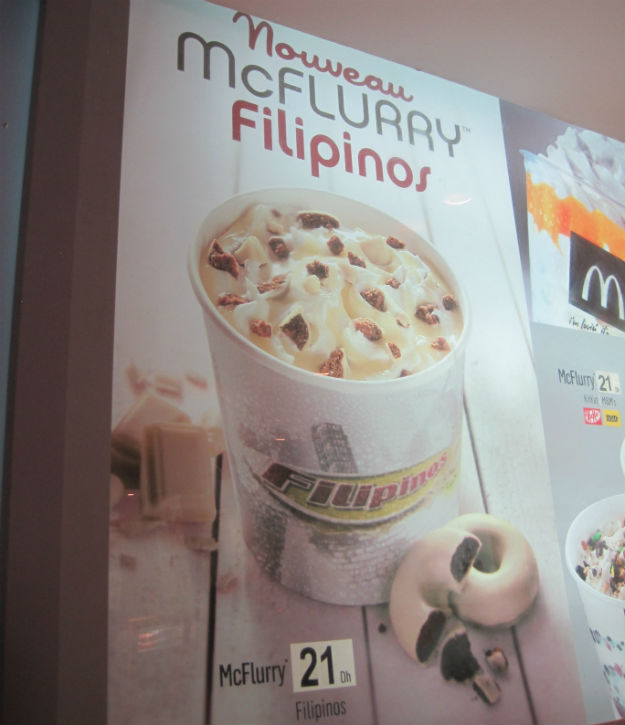 Should Filipinos be honored or offended by this in a Moroccan McDonald’s?

The false curse of Morocco
I was in Morocco nine years ago. Everything went wrong. I flew from Paris to Marrakech. At Charles de Gaulle airport I noticed that the gate next to mine had a flight going to Montreal. Guess where my bag went? Montreal. It took three days of wearing the same clothes to be reunited with it.
Then from Marrakech I took a bus to the coastal town of Essaouira where I had the most excruciating bus toilet trauma in my life. I was going to write a whole blog post about long distance bus toilet trauma, when the bus leaves earlier than your internal bowel clock is prepared for and your stomach is already feeling shaky as you wonder, “What did I eat last night that is doing this to me?”
The short story is I was on a bus to Essaouira when the bowels starting rumbling and I knew I didn’t have much time to deal with it. I had few options. The toilet on the bus was locked as if to taunt me, there was no village in sight, no trees to hide behind, nothing but a barren desert landscape and a driver not wanting to stop since we were only 30 minutes from our destination. I was mulling how much I would have to bribe the driver when I felt it coming and I ran to the front of the bus and in a panic made him stop. As he slowed down I looked at the back of the bus to see if there was a window so I could go right behind if there wasn’t, but there was, and the curious kids in the back row would have been very entertained. Miraculously, when I rushed off the bus and around the back there was a heretofore unseen thicket of thin trees and a small hill I could hide behind. I did my business as the driver was honking his horn and slowly pulling away to show his irritation, and I ran back on the bus a new, very relieved man.
Once in Essaouira, at the port I slipped down a flight of stone stairs and went straight into the sea, completely submerged, avec passport, avec camera, tout. After pulling myself back on to the ledge and trying to get my valuables out of my pocket before they became more soaked, I had to perform the walk of shame back to the hotel, through the main square, leaving a trail of sea water behind me.
In Fes I was ready to go on a killing spree against the endless touts who ruin an otherwise fascinating ancient town by their relentless opportunism. It has my vote as the worst city in the world for hassle, closely followed by Luxor, Egypt. I could write a blog post about this, too, as it destroys any enjoyment I can have when I am constantly having to deal with hostile hangers-on who don’t take the first 17 times you say “no” for an answer.
Then in Chefchaouen I became sick…you get the idea by now, so I didn’t look back at Morocco fondly even as I was buying my ticket ($580 one way from Tokyo on Etihad, $555 if I could have left three days later) but I was ready to give it another chance. All I wanted to do was to go out in the desert by the Algerian border and relax, but by the time my flight landed in Casablanca, after twelve hours of flying to Abu Dhabi, nine hours in transit and then nine hours to Casablanca, I had full blown chicken pox—and you know the rest. I think I am over it, my semi-spotty body aside. I can’t blame Morocco. I’ve had take-me-to-the-hospital-now food poisoning in Spain, too, and I keep giving Spain chances, so maybe Morocco is still in my future. 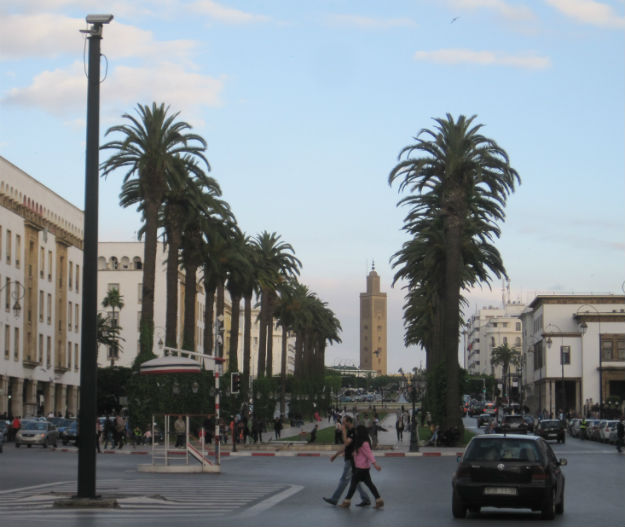 Sorry for this super-boring photo of the main drag in Rabat, the capital. Last time I was in Morocco I bought some stuff from a guy on the street in Rabat that I resold in America and paid for half of my trip here. I don’t want to say what it was since someone else might do the same—you will have to wait for it in my book/movie/screenplay/spoken word performance—and no, my backpack wasn’t half-filled with hashish. But this time I couldn’t remember exactly where it was and I couldn’t find my guy.

Practical Information
Thanks to Emmanuel at Raw Safari for giving me info that would have been very useful if I made it to the desert!
When I posted on Facebook that I was in Marrakech, a friend I hadn’t seen in ten years noticed and said she was also in town with her mother. She found this fantastic place on Airbnb where the proprietor gave them two rooms for the price of one, which essentially meant they had the whole place to themselves with a caretaker for $50, including a nice breakfast. Incredible deal. It is deep on the south side of the medina, which might be an up and coming area, a lazy assumption based on this hip cafe and art space that recently opened there.
In Rabat I looked at the youth hostel but I ended up paying double (120 dirhams at the Hotel Central) to not stay there. I don’t recognize myself these days with my newfound standards, but it’s good to know there is a bottom to avoid. It’s been a long time coming.
In Tangier I also gladly paid double to move to the Hotel Manama for 100 dirhams on a quiet side street with bathroom. Look at The Dromomaniac throwing the money around!
Did you know that Morocco was the first country in the world to recognize USA in 1777? No, no you didn’t, you didn’t know that. Students, that’s why you should drop out of school and walk the earth with me to get a real education. Say “Amen”, somebody! Let’s go! Let’s do this! (Moroccan medical students get priority.)
Why don’t you stay with me? You can follow along with RSS, subscribe to an email feed, see what’s cooking on Facebook, pray that I’ll say something worth remembering on Twitter and if you are really slumming it, there’s always Google+.