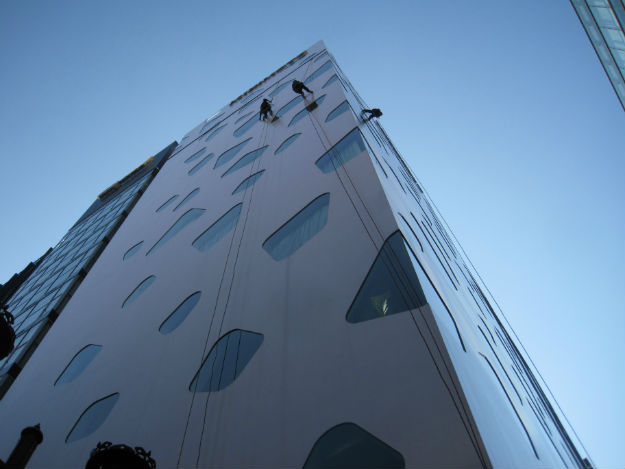 Cleaning the windows at a fashionable address in Ginza, Tokyo. 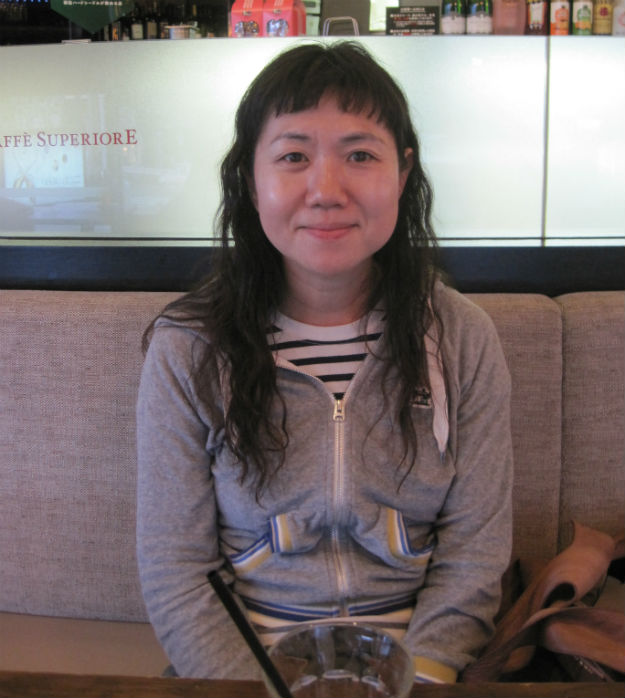 This is a semi-famous Japanese friend I met 17 years ago in the airport in Colombo, Sri Lanka. She is Mitsuyo Kakuta, a professional writer, by now having written over a dozen books. She also writes a serialized novel for a major newspaper where every day a new chapter is published. I asked her how far in advance she has it written, and she says she doesn’t write it in advance at all; the day before she makes it up on the spot! She was very calm about it. That’s what I call a professional writer. Creative writing on deadline doesn’t even inhibit her unhumanly prodigious drinking. She’s incredible.

Yes, yes, and yes. Every time I see gibberish like this I both laugh and become agitated that they didn’t go to the trouble of getting a native speaker to proofread this. If they had gone to any backpacker and said they’d buy them a few plates of sushi if they would look over a few signs before the spent good money manufacturing them, any foreigner would do it in a snap. But no… 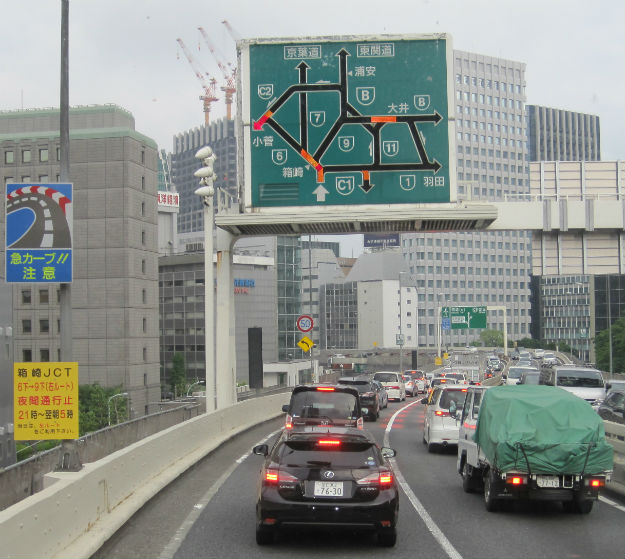 This is pure Tokyo. It is a map showing traffic jams on the elevated highway system—which by itself is pure Tokyo as the whole thing has been plopped down on top of the city; none of it touches the ground other than the entrances and exits. Look at that detail you are supposed to digest while careening through skinny lanes at high speeds. 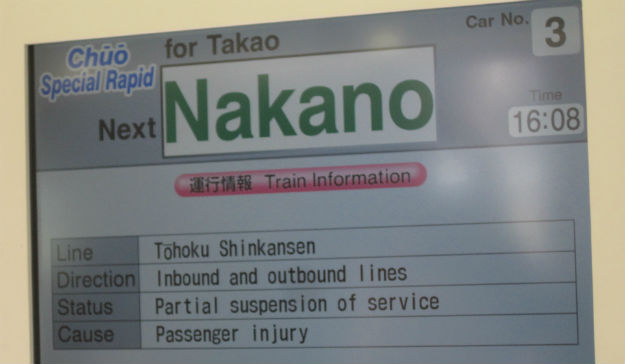 When I took this photo “passenger injury” was a problem on three different train lines. This has to be a euphemism for someone jumping on the tracks in front of a train, as this happens all the time; Japan has a very high suicide rate. At one “popular” place for passenger injuries, blue lights were installed on the platform. A university had done studies that showed its effectiveness, and it has helped. 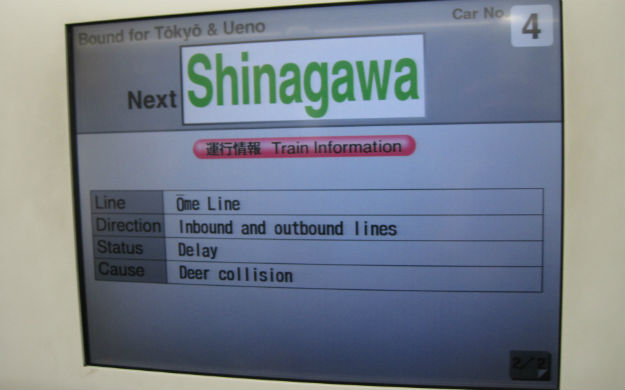 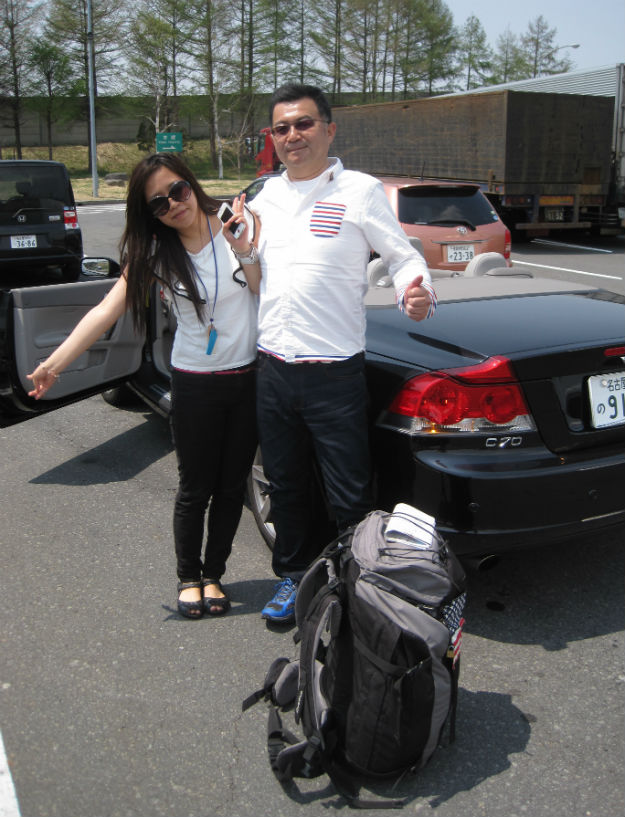 One moment I am standing in the highway rest area with my thumb out, and the next moment I am sitting in a convertible Volvo with this couple. In our small talk I told them I had been to Japan twelve times, and the girl then asked what my favorite Japanese song is. I said anything by Spitz, and she quickly poked around on her phone, attached it to the car stereo, and soon we were chugging down the highway singing “Cherry.” Good times ONLY to be had when hitchhiking (and traveling light). 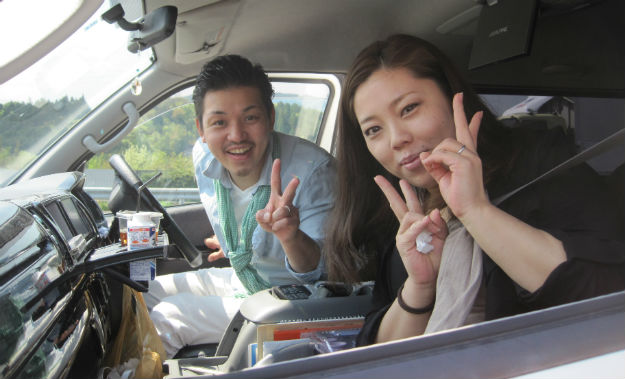 This couple also picked me up hitchhiking 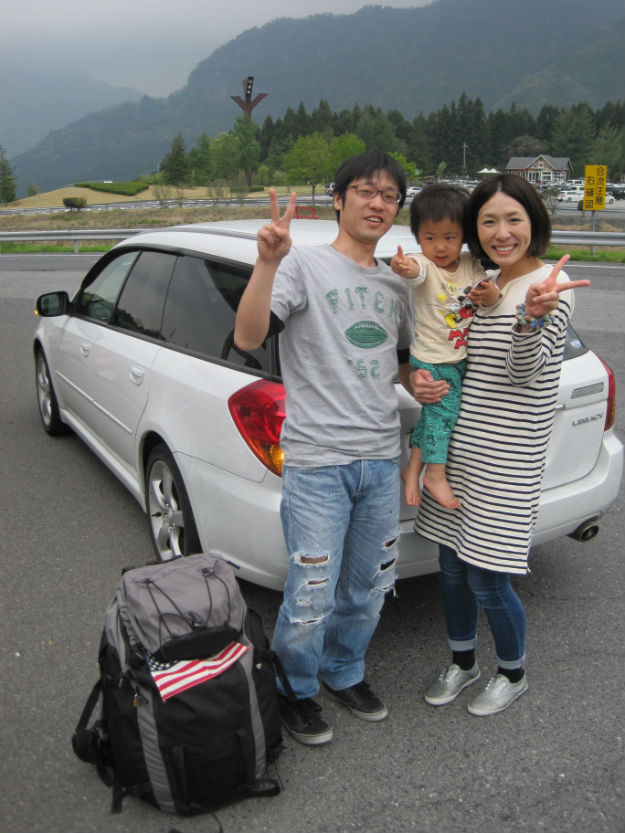 This family also picked me up hitchhiking

Obscure, semi-useful practical information for budding diehard Japanophiles:
Did you know that Japan is now the cheapest country in Asia to send stuff home if your home is called California? It costs 1080 yen (US$10.50) to send a small packet (max two kgs) by sea. The next cheapest, Hong Kong, is HK$83 for 2kgs, which is US$11. Everywhere else I know is much, much more. Malaysia used to be my go-to place, but I threw up in my mouth when I saw their latest rate increases.
Did you know that if you want to fly between the capitals of the two biggest economies in Asia, Beijing and Tokyo, it’s cheapest to buy two separate flights on AirAsia.com, where each flight is over 6 hours? The fact that I didn’t do that means I am getting old. I did the next cheapest, which was still ridiculous: I flew via Manila, a solid 4+ hours from either place on Cebu Pacific Air.
I have flown Cebu Pacific Air maybe five times by now and every time they are sharks about checking onward tickets. Last time at the check-in counter they even had a proclamation printed and laminated from some government official declaring that it must be shown. You might want to look into a fake onward ticket.
There’s a new place to hitchhike from Tokyo’s Narita airport to town. The only highway parking area between the airport and Tokyo is Shisui, which has become a behemoth since the Shisui Premium Outlets opened up in the same parking lot. There are 200 yen(?) shuttle buses straight from the airport, but if you are just going to central Tokyo, you’ll have to balance that 200 yen with the 1030 yen, 80 minute, Keisei train. There are now JR express trains that cost 1500 yen to Shinjuku and take one hour (The train costs more in the reverse direction.) 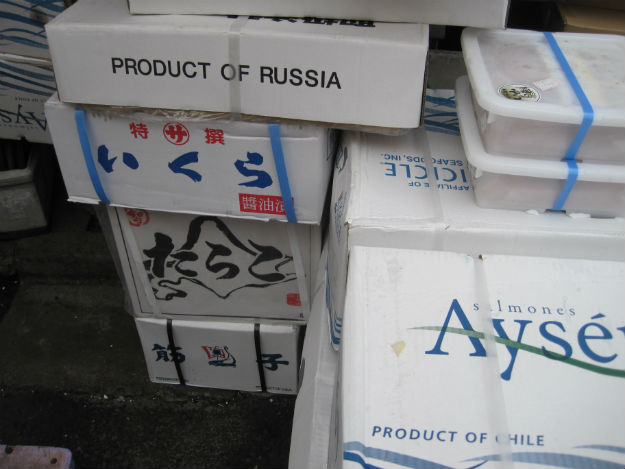 Well, well, well, what do we have here behind the scenes at the famous Tsukiji fish market in Tokyo? Fish from Russia, Chile and USA (the bottom box)! Scaaandalous! Speaking of globalization, Japan announced that they are going to give Filipinos, Vietnamese and Indonesians free visa on arrival. In the Philippines this wasn’t the kind of news that went unnoticed. They send so many of their citizens abroad already that I can imagine a lot of people will try and work under the table. I would.

Sleeping in or near airports
Tokyo airport police are now very lenient about letting people sleep in both of Tokyo’s airports. I didn’t have to show a ticket to prove I was flying out. The place to go in Narita is the staff area upstairs in Terminal 2. There is a staff area in Terminal 1 that is less secluded. Both are just a few rows of seats that have potted plants and signs saying they are for staff, but I didn’t notice any obvious staff on the long, soft, armrest-less benches. I slept well, and I am poor sleeper in the best of times.
The best place to sleep in Tokyo’s Haneda Airport is anywhere you can find space because everyone is sleeping there; AirAsia’s flight arrives after public transport has finished (whose fault is this?) I saw a pack of 15 people sleep in a row using their bags as a kind of bunker. Only in Japan would you not worry about someone stealing your bag. Otherwise, Haneda is either drafty or there just isn’t good hidden space. The other place to try is the edge of the terminal on the ground floor before you get to the parking lots. You might get some bench space.
If you don’t mind paying 2000 yen you can stay in the so-called Airport Hostel that is about eight km from the airport, but Yama-san will pick you up for free. I did all three: I slept in both airports and I stayed with Yama-san, which I wrote about last time here with the bonus of the greatest Japanese music video ever. For Japan it’s a very good deal, though I was ready to kill the idiot sleeping next to me. Let’s hope there’s a special place in hell reserved for those who type on their phones at 6am with the keypad volume on high. There has to be, right? What kind of inbred would do that? Same with the retards who have their incoming message tone on high. Once or twice, OK, but over and over? Have you gone deaf from your keypad volume?
Since when have so many travelers been raised by wolves? Traveling sucks, I’m telling you. Morocco, where I am now, is hearty confirmation since I came down with chicken pox, which is but one of a long line of curses I’ve endured on my visits here. That’s the next blog post. 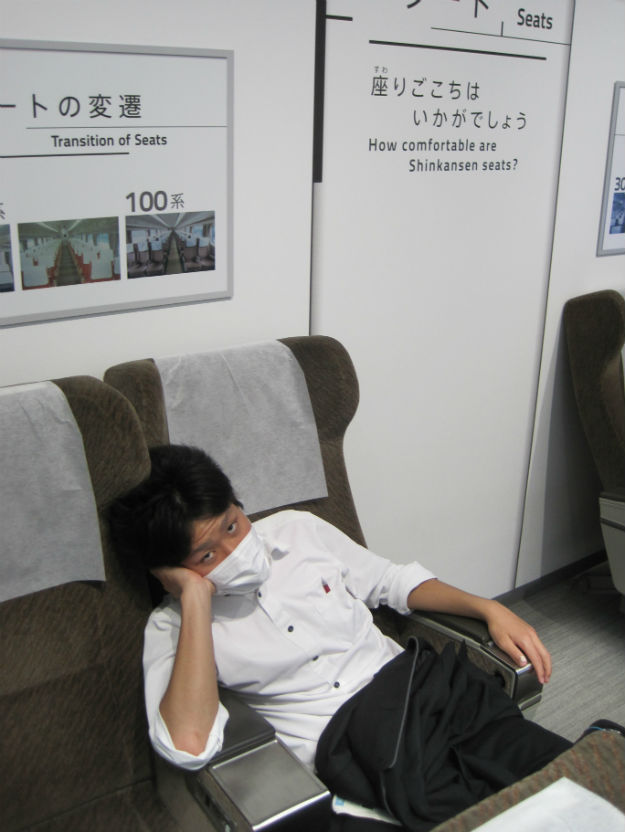 How comfortable are shinkansen seats? Pretty comfortable, it appears. This guy was fast asleep until I took the photo, and then he was fast irritated.

I forgot to add this: conveyor belt sushi with even more automation than I was used to. The link is here if you can’t see it below.