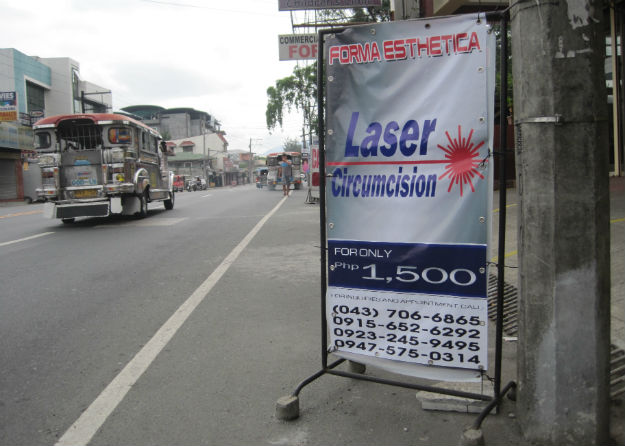 The first way to ruin your ten days in Philippines might be a roadside circumcision (1500 pesos = US$33) but the main thing is to have Easter be in the middle and a dental visits on both ends of it. I only realized when I landed that I was coming right before the biggest holiday of the year. Is there a more Easter-loving country on the planet than the Philippines? There aren’t many. Everyone was on the move, and most stores were shut down for days.
On Good Friday I was lamenting to the owner of a 7-11 convenience store that everything was closed. Normally garrulous, this Filipino went quiet for two beats before saying with pity, “You aren’t Catholic.” I said no, leaving out that not only am I not Catholic, I don’t even know what the significance of Easter is. If I confessed to him that I also went to a catholic high school for four years and made a graduation speech, his head might have exploded.
It was hard to find decent food to eat over the holiday, but truth be told, it’s a problem any time. I have to say it: the food is horrible in the Philippines. Last time I was here a friend took me out to great food meal after meal, but they weren’t “regular” places “normal” people go. The food that is most accessible is a nightmare of fatty, greasy, and fried with sweets, sweets and more sweets.
The preponderance of junk food is absolutely incredible. (As an American I’m uniquely qualified to judge.) Every mall has exactly the same chain stores, the supermarkets have whole aisles devoted to packaged cupcakes, and anything at a bakery tastes like a sweet hot dog bun. It’s unbelievable. In the “wellness” section of one supermarket I saw pancake mix, brownie mix, boxes of condensed milk and cream, and baking chocolate. 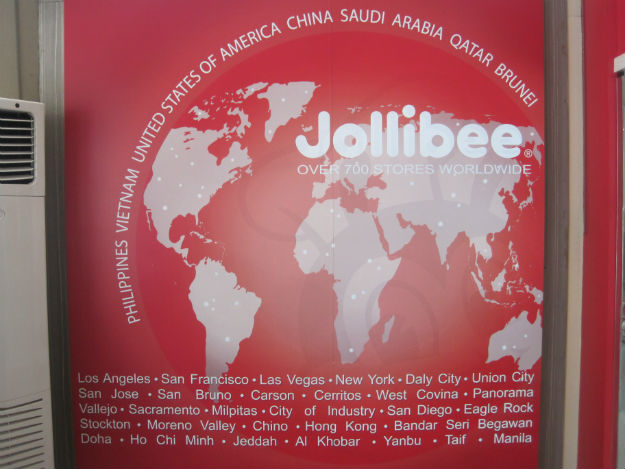 Jollibee is a horrendous Filipino fast food chain but I love this list of locations, particularly the deep drop-off after New York. Daly City is a suburb of San Francisco that had long been a first destination for fresh-off-the-boat Filipinos and is therefore a place a surprising number of Filipinos here know, whereas I don’t think people who live 30km away in the East Bay can find it on the map.

When I arrived at Manila airport I went to the shuttle bus (there is finally a shuttle bus! It took only six years to organize a ragged old bus to take passengers to the nearest train station—“You go, Manila!”) sat down, and heard the radio blasting “When Smokey Sings” by ABC. Now that’s a welcome, Filipino style! It’s a pretty obscure 1980s song, but you can’t faze a Filipino by saying that for they are at the vanguard of resurrecting classic songs. (I’ve always claimed this: the singers of 1980s power balladeers, Air Supply, can declare tomorrow that they are Filipino citizens and want to run for President, and they will get 95% of the vote without trying.) It’s one thing I deeply love about the Philippines. In the most random of places I will hear old nuggets. I was in a mall trying to distance myself from video game white noise when I suddenly came across someone on a karaoke machine passionately belting out “Lying Eyes” by The Eagles (no link—I hate The Eagles, and it’s the worst band name ever) and it’s like that anywhere you go. Rock on, Pinoys! 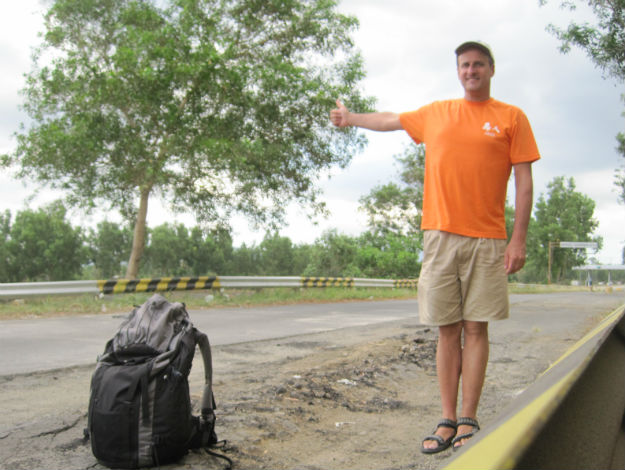 That’s pretty good form, I must say. This is in Malvar, one exit away from Lipa City, about 100km south of Manila where I spent the Easter holiday. The hitchhiking went OK. It’s not commonly done here, but Filipinos are all-time gracious hosts and are usually happy to help the weirdo who is smiling awkwardly on the side of the road with his thumb out for some reason. An Aussie family drove me back to Manila. Speaking of which, I was surprised to see that the land down here reminded me of Australia: rust-colored soil, haphazard vegetation, and what looked like gum trees from afar, none of which are evident in this photo. Thank me later. 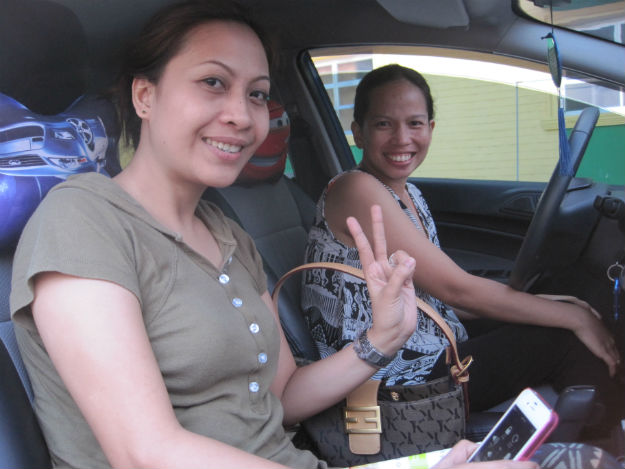 These two women picked me up hitchhiking and insisted on driving me straight to the hostel. 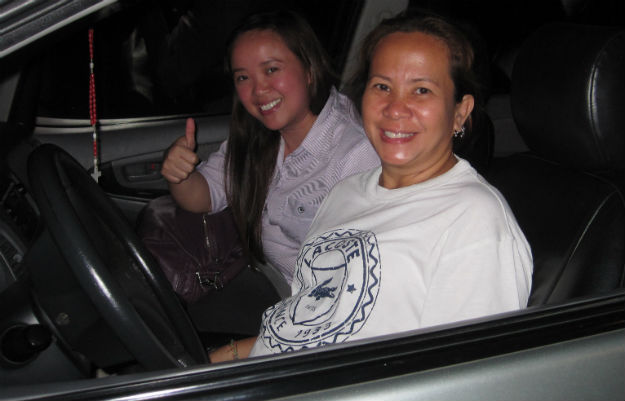 These two women plus a thirteen-year-old girl picked me up hitchhiking in front of my dentist’s office in the dark in Paranaque, a southern suburb of Manila. 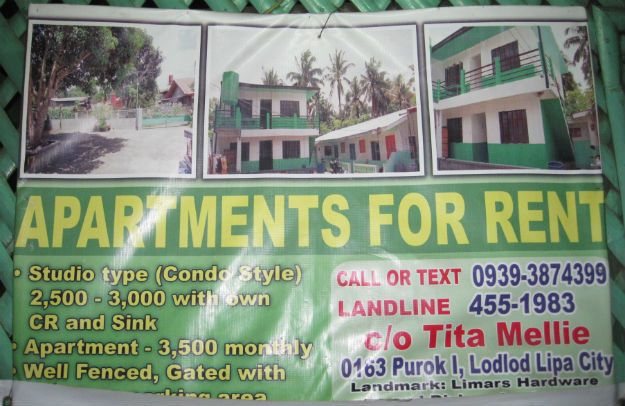 Think about this: it’s 44 pesos to the dollar, so you can have your own apartment for 3500 pesos ($80) a month! (“CR” means “comfort room”, or bathroom.) My parole officer—I mean, anyone’s parole officer—will never ever find you! 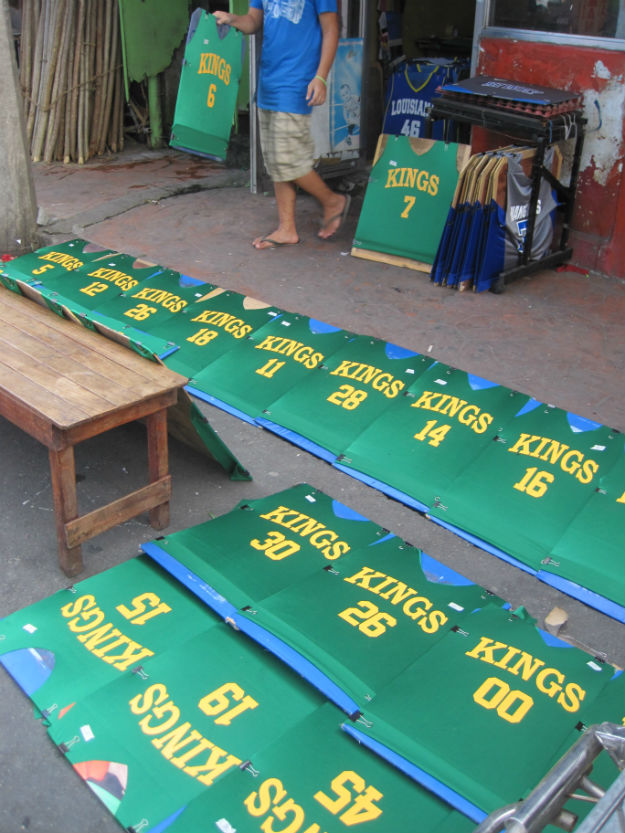 Another thing unique to the Philippines I like are the basketball jerseys always being made or repaired by small mom and pop shops. 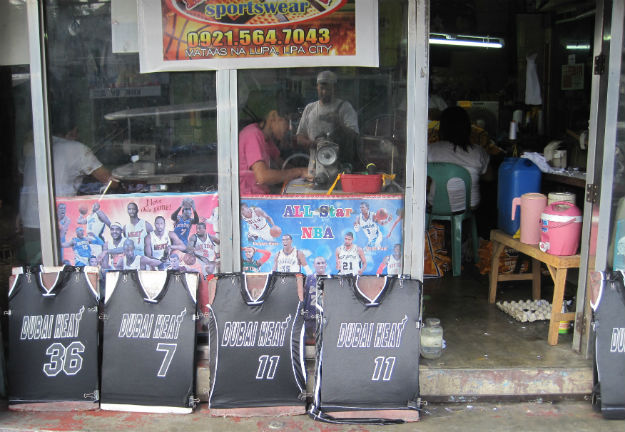 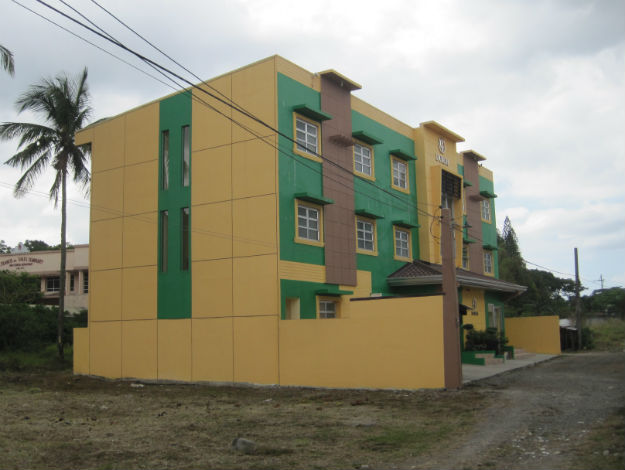 This is a great idea America desperately needs: cheap temporary accommodation. This is called G Dorm. The men’s dorm was empty over the holidays so I had my own room for 150 pesos (US$3.30) a night. These places are meant for transient workers, in this case the call center next door. Since it isn’t a hostel per se, they don’t supply sheets or even a pillow. Finally my sarong shows its usefulness! Another boarder let me use her pillow while she was away. There is camaraderie, safety, it’s cheap, central, and it facilitates the movement of workers to where jobs are, which is a problem in America.

Any time I meet call center workers I apologize for past rudeness, explaining that it makes me berserk when they read off a script instead of listening to me. One girl at G Dorm said that they focus on a list of keywords they have to help them move to the next step in case their English is lacking. She said her present company was better as it dealt with Australians, saying that Aussies were “less mean” than everyone else.
The day before I met a policeman who moonlights in a call center. He wasn’t bothered by the negativity he has to deal with every day. Besides, he said, some people just hang up the minute he starts talking. I said, “That was me. Sorry.”
I’m not sure what to say about my dental tourism here. It was cheap: US$380 for CAD/CAM (aka Cerec) restoration on a back molar by a German dentist(!) but it took 11 hours in total over three visits. It might not be the end either as I have something called a “balanced contact molar” which is not as benign as it sounds.

PRACTICAL INFORMATION
All hostels in Manila are awful. Trust me on this. Don’t waste your time looking at reviews on TripAdvisor or whatever. It’s all rubbish. Every hostel will have the same tired, worn look to match its faulty plumbing, filthy rooms and flimsy beds. Even if they advertise themselves as “new”, find out how new because newness dies quickly and irrevocably in relentless Manila.
I like a place I often stay, Pension Natividad, in the heart of the hell of Malate (don’t ever go left when you walk out of the hostel, even in daytime) because it’s hardcore Catholic, meaning it’s clean and austere. I’m pretty sure it doesn’t show up on any hostel search engines, too, because they don’t take reservations. Unless I am mistaken, the oasis is only first come, first serve.
I moved closer to my dentist in the southern suburb of Paranaque at Green Mango Hostel where a dorm bed is only 250 pesos but where I woke up with weird, bright red spots on my legs. I’m pretty sure this is a hot sheet hotel, too, judging by the number of people who avail themselves of the “12 hour rental” with no luggage. I moved to a 12 hour rental room after I had an “incident” with a Japanese boxer staying in the dorm. I had to wear headphones. And use two pairs of gloves to touch the remote control.
There are two miserable people staying an indeterminate time at the hostel. Make no mistake: there’s nothing sadder than a foreigner staying long term in a cheap Manila hostel. Nothing. I see them, I know them, and I strenuously try and avoid becoming one of them.

If you were into this blog post there are more from my visit last year:
If I wrote for the Filipino version of The Onion…
Palawan, Philippines, the Last Frontier (of Mister Donut)
Narrowly Avoiding Death (from Obesity) in Davao, Mindanao
Camiguin and its bubonic plague-free lanzones festival
Cagayan de Oro, best (ping pong) city in the Philippines
Malate + Makati = Manila?
A mild defense of Filipino food
And this is a Philippines section from my old website, a very retro-looking thing that still makes me smile when I see all those ebullient faces. I show a place where you can get a free circumcision, too, if you are curious.
Why don’t you stay with me? You can follow along with RSS, subscribe to an email feed, see what’s cooking on Facebook, pray that I’ll say something worth remembering on Twitter and if you are really slumming it, there’s always Google+.