Really? Rabies free? This is Camiguin’s selling point? This is what they want to announce on a billboard? Was “An almost smallpox-free island!” under consideration? How about “Ebola: it’s not that bad!” If they really want tourists, they should try “Welcome to Camiguin: a pants-free island.” Nearby I saw another classic sign: “This is a child-friendly school.” I was sure that if I kept my eyes open long enough, I would find “This is a rabies-friendly school.” 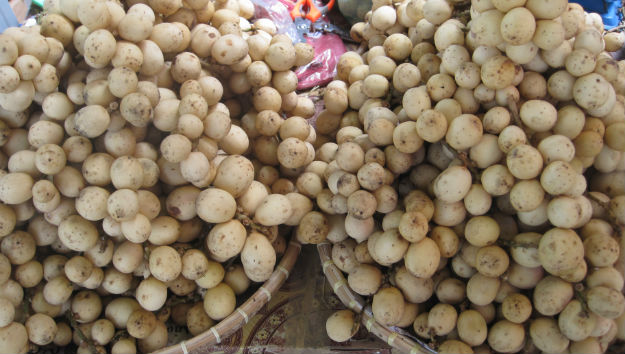 The event of the year, the lanzones festival, starts this weekend, Oct 20. Lanzones are a delicious fruit that resembles longan, but after opening a few, your hands feel like they have rubber cement on them. (This girl in the tourist office—I told her not to smile—suggested I use gasoline to clean them. Kind of impractical.) The town is getting spruced up. Decorations are being made. Marching bands have been practicing all hours of the day and night for the parade. The number of visitors is expected to go from me and a few lost stragglers to drunken hordes in Woodstock-sized, hide-your-daughters proportions. My timing is bad again.

I had irrationally high hopes for Camiguin, but I knew it would deliver because of my experience on a similar island due west of it, Siquijor, one of my favorite places. It’s just the right size: big enough that you never feel like you have seen it all and not so small that you feel like a castaway. These are places to simply be with little to sightsee. I just wanted to swim, play basketball, do an excursion to a nearby sandbar, and frolic on the beach. I only managed basketball (the water was too choppy from the high winds and no other backpackers were around to charter a boat), but I still managed five days easily. I hung out with good people, hitchhiked here and there, ate lanzones, and used unleaded to clean up.

Not my regular sandals.

Basketball is king in the Philippines. I haven’t seen one soccer ball being kicked around my entire time in the country. I think every top NBA player has made a promotional appearance in Manila this off-season: Lebron James, Kobe Bryant, Derrick Rose, Dwight Howard, et al. The coach of the Miami Heat is Filipino. There is an NBA preseason game in Manila this week.
Near the tourist office I was hanging out watching a neighborhood basketball game. I could tell it was semi-serious (i.e. they gambled) because they were all wearing shoes. I was invited to play, even though I was shoeless. I knew they would invite me to play because this is the Philippines and they are friendly people; that’s the manifestation of their friendliness. (What would be the reverse? A bunch of people in America singing karaoke at a party, seeing a Filipino walk by, and inviting him in for a few songs? Would that happen? Unlikely.) Anyway, I returned the next day to play. My team lost. We each had to pay 20 pesos to the other team. I felt awful, reminding my teammates that it was the equivalent of a kilo of lanzones or half a kilo of rice—serious stuff—but they just laughed and started smoking.
It occurred to me later that maybe they wanted me to play because I had to guard the biggest Filipino I have ever seen, an aggressive bull of a dude. Once he got a full head of steam and drove through my chest on the way to the basket. My ribs still hurt over a week later. Sneezing is the worst.

Some of the guys. Not pictured is the human refrigerator. 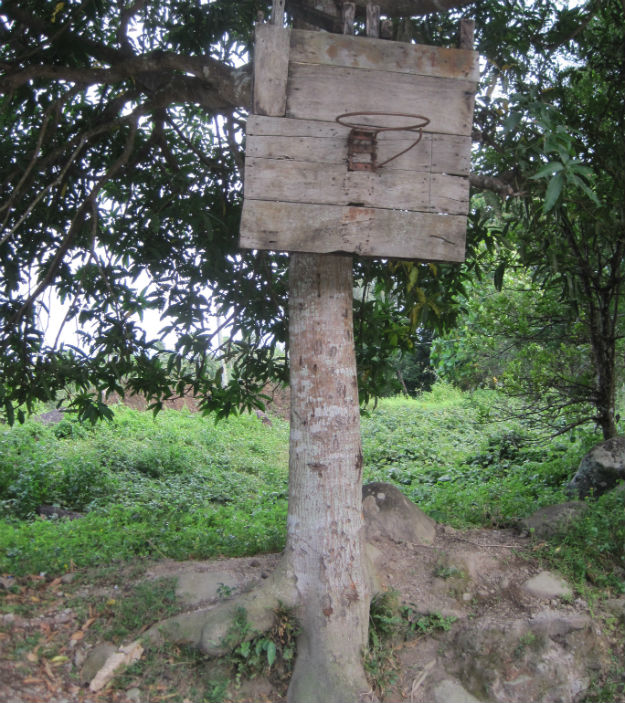 A homemade basketball basket. You could make a beautiful coffee-table picture book of all the evocative basketball hoops in the country.

A sign you will never see in America, where “transient” is a swear word.

I went to Mambajao’s post office on the edge of town. The lone guy working there was sitting outside with his friends when I approached. I asked how much it costs to send a postcard to USA. (In the Philippines you rarely get the same answer from any two post offices.) He went inside, laid his smartphone on the counter, and shuffled through some papers. On his smartphone was a porn movie. He kept searching for the right paper and had to move his phone. I thought he would realize that I could see it and hide the phone, but he simply moved it a little to the side as he kept looking. He quoted 20 pesos, which fits in neatly with what I have heard at other post offices: 13, 14, 17, 33, 37, and 40 pesos. 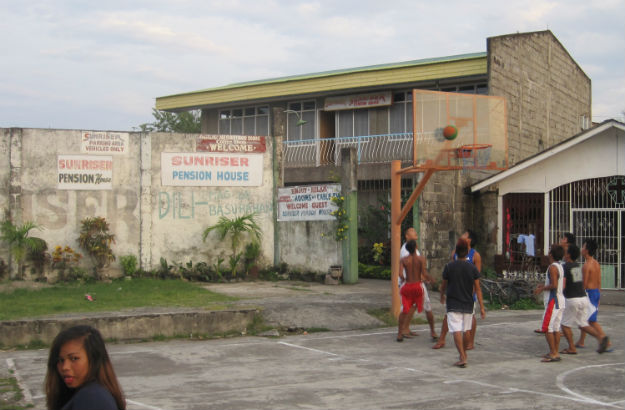 No less than seven signs for the Sunriser Pension in case you weren’t sure where you were. This is a shoeless basketball game. 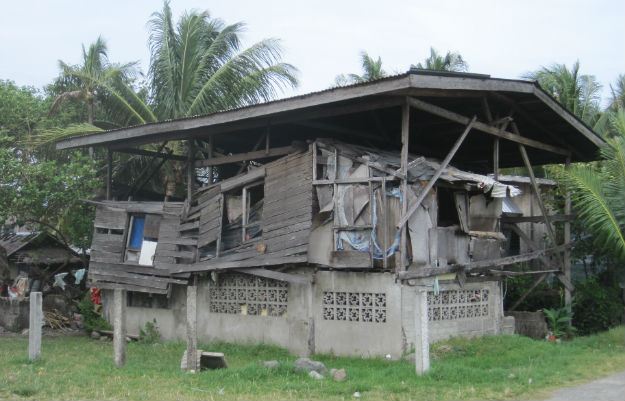 Maybe there are seven signs so you don’t get confused and wander into this place next door.

On the ferry back to the mainland, a girl about 12 years old came up to me for a quick chat. (That doesn’t really happen in other countries, in case you are wondering.) A ship passed with the name “Kalinaw” on the side. I said to the girl that it would be funnier if it was called “Kinilaw”, a kind of Filipino ceviche. She cracked up. I’m comedy gold to pre-teens. For everyone else, I’m a freak.

Practical Information
I got a tip from a guy on Lonely Planet’s Thorn Tree, asean2011, which is once again a relevant resource, to stay at GV Hotels in the main town on the island, Mambajao. It is part of a chain. I paid 350 pesos for a single including cobwebs, cable TV, and a bathroom with shoddy plumbing.
I moved to the Sunriser Pension in Mambajao, just next to the market to the east. 200 pesos for a bare room. At 9:30pm they lock the gates. It isn’t as barbaric as it sounds since Mambajao closes for the night early.
The ferry from the nearest point on the mainland, Balingoan, to Binoni, Camiguin is 170 pesos ($4). Taking a boat for an hour to an island sounds pleasant, but the reality is that there are always people puking their guts out. Often it is the same people who start the trip laying on their side. Don’t sit next to those people. 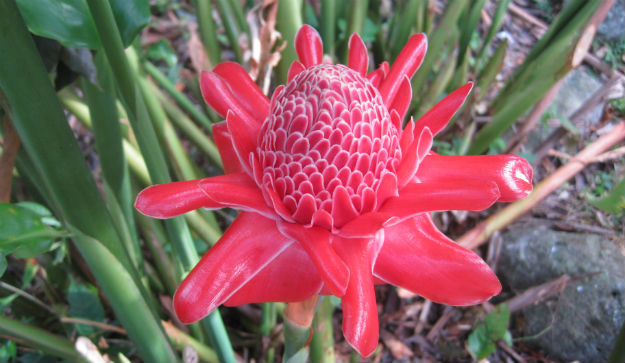