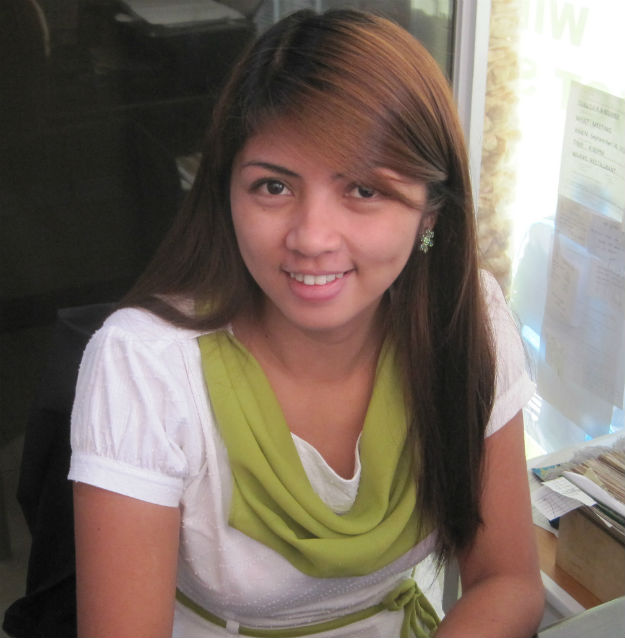 This beautiful girl works in my hotel in Davao. Look at that hair. Filipinas have amazing, shampoo-commercial hair. I have a theory: at the end of the day they go around and collect all the unsold adobo from the restaurants and rub the liquid in the hair. The oil gives a lustrous shine, the vinegar acts as an astringent that provides thickness and makes individual strands strong, the garlic and ginger…they uh…I haven’t thought it all the way through. It’s a theory-in-progress.

I flew from “The Last Frontier”, the island of Palawan, to the real last frontier, the island of Mindanao in the far south. Some people freak out that this is Terrorism Central and the Kidnapping Capital of Philippines due to some isolated incidents that keep popping up in the news. I could be overstating matters, but it’s like being scared to go to San Francisco because of rioting in Los Angeles. Nevertheless, many northern Filipinos seem to regard the whole island as a hotbed of hotheads and are afraid to visit.
In Davao, southern Mindanao, I was very lucky to know a local celebrity that I need to publicly thank, Jojie Alcantara. She’s a columnist for two large newspapers, a photographer, journalist, former TV show host, astronaut, zookeeper—I lost track of it all. Her hands seem to be on everything and she knows everyone. I opened up a newspaper, and there she was. This is a TV commercial of her that kills me.
As it related to me, she used her vast connections to make sure I feasted to excess, like I was a duck to be harvested for foie gras. I had lost about 10lbs (4.5kg) since I ballooned in Europe two months ago, making good progress, headed in the right direction, and then I was Davao’d. Back to square one. Photos will come when I write about Filipino food, which needs to be discussed. (Two words: pandan leaves.) 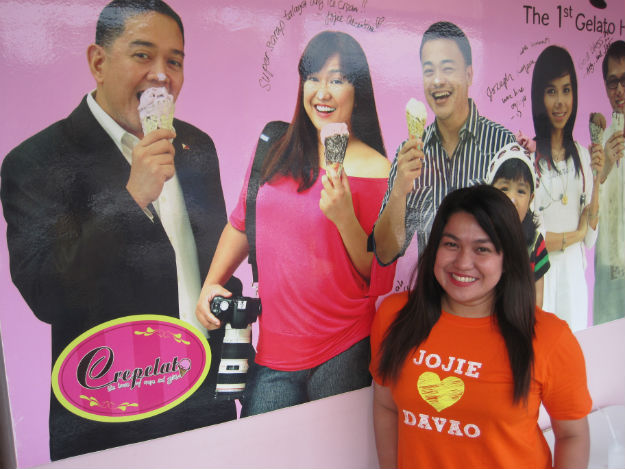 Double Jojie at Crepelato, site of another ungodly massive lunch.

Davao doesn’t make a nice first impression. This is the greenest and cleanest city in the Philippines? (It is also said to be the largest by area in the world, but finding consensus on the internet is fruitless.) Davao grew on me, though, largely for its faded downtown and the people, who all seem to have extensive family histories in town and emanate civic pride.
The scourge of every Filipino city, Davao included, is the foul air that centers on the overabundance of jeepneys, the modified old American jeeps used for public transport that emit heavy fumes. While looking cool, I don’t see why hundreds of polluting, noisy jeepneys are better than having a bus system. I’m saving this argument for Manila next week. It’s sure to be spellbinding reading (cough!)
I made a mistake in not going up the east coast of Mindanao, particularly a couple of beautiful places I am not allowed to utter by diktat from Jojie lest all my dozens and dozens of readers invade and destroy.

Jojie shouldn’t be the only one getting commercials. Picture this: (camera cutting to me as I take a break from chopping wood) “Hi, I’m Kent Foster, The Dromomaniac. You know, friends, sometimes I get dehydrated on the road, and I find that nothing quenches my thirst that a big glass of refreshing cold pee…” 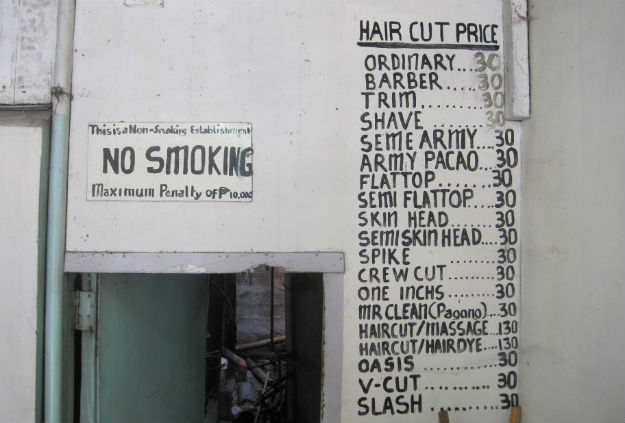 When I was in Indonesia last year I anointed it the second friendliest country in the world after the Philippines. I said (quoting yourself is surely the first sign of megalomania), “I’ve always thought Indonesians were the second friendliest people on the planet after Filipinos. The difference is that, initially, an Indonesian might give you a hard stare before their smile blossoms, whereas in the Philippines they love you at first sight, eternally and unconditionally.”
OK, it’s a little rich, but I still more or less feel that way. It helps if you aren’t in a touristy place where sometimes—yet rarely—you feel like a zoo animal being poked. In the Philippines it’s incredible how everyone is so good-natured and quick with a smile or a hello. It isn’t a ploy to ask for money nor are they in awe of white people or any other obsequiousness, it is just a reflexive, sincere greeting and curiosity. It’s great. It doesn’t hurt that a Filipino smile is blindingly bright, even from all the terrorists and kidnappers in Mindanao.
This is why it’s disorienting to see the evening news or the tabloid newspapers and see all the gruesome crime and severed heads. Is this really happening in my Philippines? How come I never come across these blood-thirsty Filipinos?

Durian’s qualities as a stimulant don’t work on everyone.

Likewise, before I started this trip I had the Holy Mother of All Problems with my website hosting company, 1and1.com. It was the angriest I have been in a long time, but as furious as I was, I had to reflect for a moment that I was dealing with a call center in the Philippines. As incredibly frustrated as I was, when I found myself raising my voice, I’d catch myself, thinking, “I can’t believe I am yelling at a Filipino! What is wrong with me?” As my issues with 1and1.com compounded, however, I managed to overcome my reticence pretty quickly, and I yelled at Filipinos for several days. I still feel a little bad about it.
While the Philippines is wearing the championship belt of friendliness, it doesn’t mean there aren’t difficulties, just as the fact that even though almost everyone speaks English doesn’t imply a lack of communication problems. Getting directions from a Filipino, for example, is agony. Also, I receive a staggering amount of misinformation. I don’t know what’s behind this, if it is part of the Asian concept of losing face if you admit to not knowing something, so you make up an answer—which makes me berserk. I never get used to it. 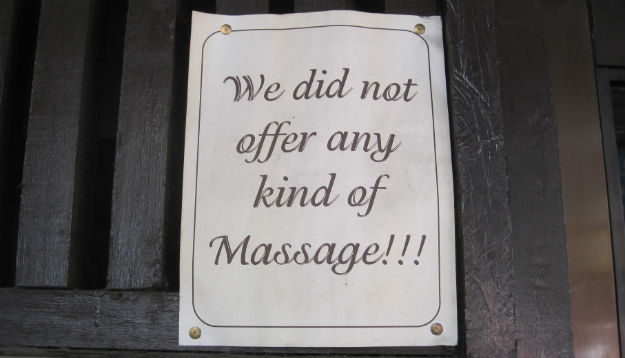 Just a liiiittle too defensive, I would say, especially because I was offered a massage every time I walked by.

It’s unbelievable and sad how many pawn shops there are in every corner of the Philippines. Maybe this is another thing I don’t understand fully, but don’t pawnshops have the worst terms to get a loan?
I ended up having to use a pawn shop to pay for a plane ticket in cash because for the umpteenth time my credit card, Capital One, refused the transaction. It is most irksome, to put it politely. Capital One wants you to tell them where you are traveling so the card will be accepted, and then they routinely block transactions in that country because they deem it “suspicious activity”. What the hell?! I have yelled at them so many times now I give up. Besides, that also might be a call center in the Philippines, and one of these days someone is going to recognize my voice and I will be the severed head in the news. 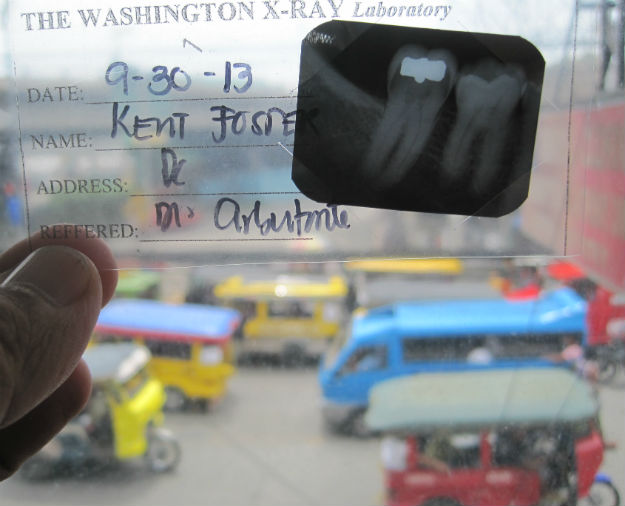 Practical Information
The hotel find for me was the new Hotel Uno right downtown. 250 pesos for a single room with shared “comfort room”, as they call it. Get a room with a window and then you won’t need an alarm clock because every morning at exactly 6:30am you will hear, “YYYYY-M-C-A!” I was told it is some sort of dance class at nearby People’s Park. At 6:30am.
There are lots of cheap places called microtels and dormitels, sometimes with offers of massage which would be funny if you were on the top bunk in a crowded dorm.
In Tagum City I stayed in the sad Waling Waling Pension for 350 pesos and in Butuan at Julian’s Inn for 280 pesos. In all three towns you can drink the tap water. Yes! 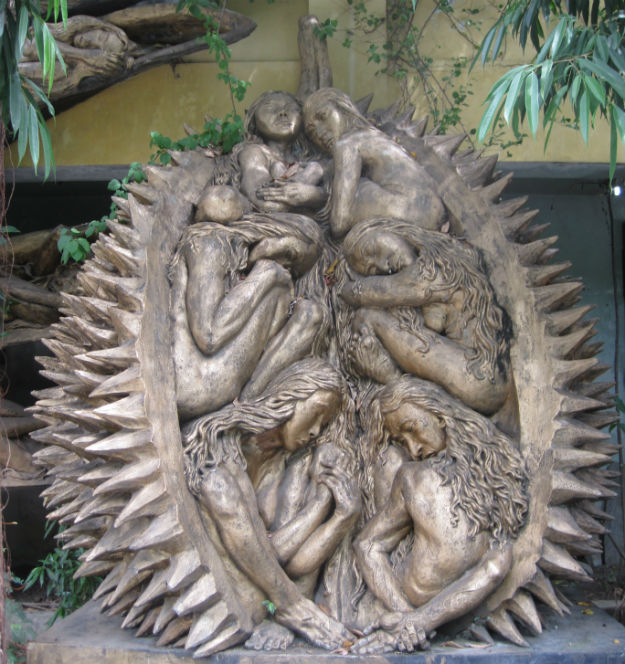 Durian sculpture in front of Ponce Suites hotel from the family of the artist, Kublai Millan. It’s unique—you have never seen so much art in a hotel, trust me—and a very reasonable place to stay if you don’t want to sweat out the hot rooms at the Hotel Uno. Check out the rooftop cafe for the view and trippy decor.