Business first. Hey, my Filipina friends who can use a little extra pocket money to travel: there’s a gold mine on your head! You need to sell your hair. Someone got US$160 for “100% raw virgin Filipino hair” on eBay. (Is it “Filipino” or “Filipina” hair? Raw? If it’s Filipino hair it can only be deep-fried. And how do they know they are virgins? So many questions…) It’s yet another free business idea from The Dromomaniac! I give and give and give.
Pleasure second. Palawan is a long, narrow island in the southwest of the Philippine archipelago, stretching towards Malaysia. It’s being marketed as “The Last Frontier” which is a hard claim to pull off when you have $25 flights from Manila and a paved road almost the entire length of the island, not to mention 24-hour McDonald’s and Jollibees. (By the way, it’s nostalgic for an American to come to the Philippines and see American brands that are either dead or dying back home but are popular here such as RC Cola, Shakey’s Pizza, 7-11, Dairy Queen and Mister Donut. I might have thrown up in the bathroom of a Shakey’s Pizza at a birthday party while in junior high school. Memories!) 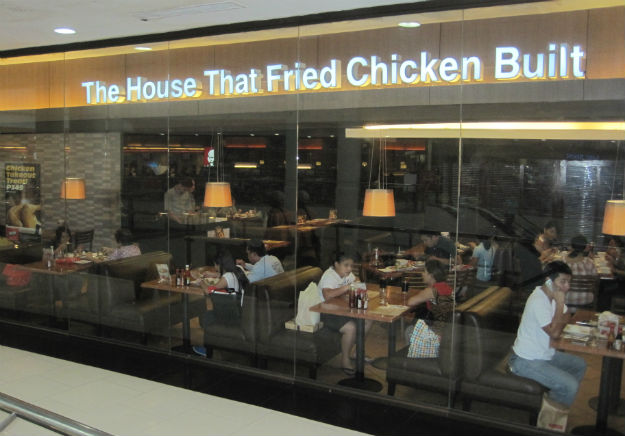 The Philippines is full of names of businesses that sound like they were conjured up by hyperactive kids on their third day awake which would be dismissed in America as not serious enough, but Filipinos run with them. (Last night I ate at “Chick a Bing Daks Fried Chicken”—and it’s a chain, as is this.) It goes a long way in explaining Filipino’s playfulness and love for wordplay. 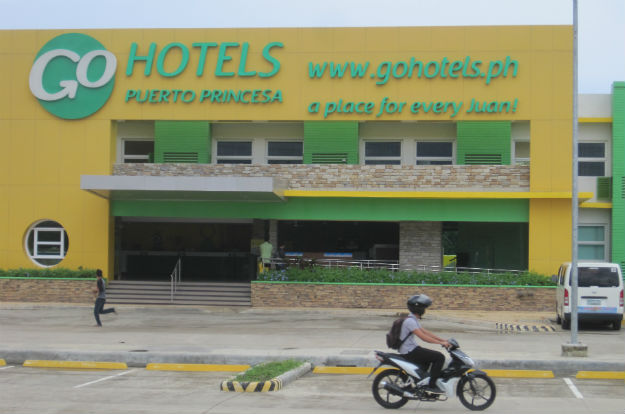 A place for every Juan! 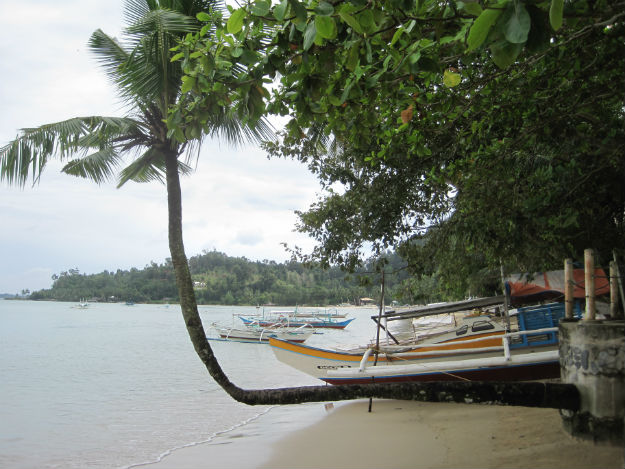 Port Barton = Paradise*
Being in a paradise* like Port Barton is to feel like you are bearing witness to a time and place that is going to soon change dramatically. It is only 22km (15 miles) from the main road, but after a rain parts of it are a muddy bog that only a 4WD can do. Only one bus a day comes. They are building a road, though, and once that is completed, everything will change, and very quickly. It should be only one or two more dry seasons and then it’s game over.
As it stands now, the bad road acts as a buffer from the outside world, if I may be a bit melodramatic. It has a beautiful, wide tranquil bay with maybe ten “resorts” of various quality. The water, though opaque from the offshore winds, is a perfect temperature and absolutely ideal for swimming.
There’s electricity only in the evenings and not many opportunities to use the internet, but it’s OK, I mean, I don’t HAVE to check out womenbehindbars.com every day. There’s also not many food options outside of the resorts, but thankfully some excellent, simple food is at Gacayan Restaurant, where I ate every meal. Everything is 50 pesos ($1.15): the chicken coconut curry, the pork and mung bean stew, the not-so-fatty chicken adobo, and even the crab for breakfast. 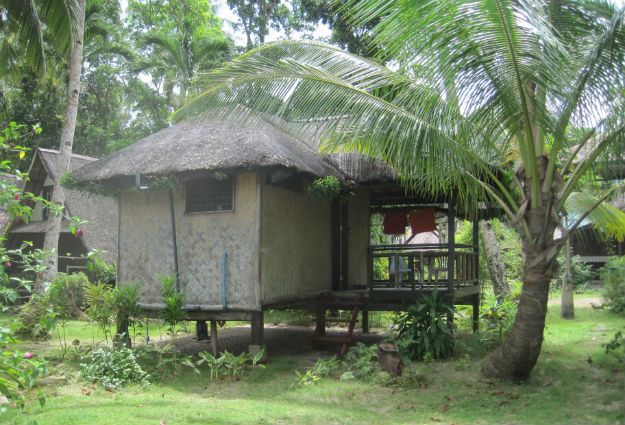 I paid 360 pesos (US$8) for my own bungalow with bathroom and shower about 20 meters from the beach in Deep Gold Resort. The roosters sound far away. I can only hear the surf. It’s peaceful. It’s great, a true paradise*. I never saw more than a few travelers around on any given day because it is the lowest of low seasons since it is the rainiest time of year. As luck would have it, it rained every day my first two weeks in the Philippines except for my four days there.
So what did I do all day? I imagined myself as Hemingway. I had already been letting the beard grow and wearing a weather-beaten cap askew. I then insisted that the resort staff call me “Papa”. When I wasn’t on my veranda swearing at people walking by, challenging everyone to fight, I was sitting in the tropical shade, receiving gentle sea breezes, getting inspired to write the timeless prose you are gratefully reading now. Let’s see now…is it womenbehindbars.com or womanbehindbars.com?
Tiny Port Barton has at least three ladyboys in residence. Ladyboys are more commonly thought of as being Thai, but the Philippines has plenty. Can we say that the more ladyboys you see, the more tolerance locals have for them? I would think so. Is it a fair question to ask if there is a similarly-sized small town in America that can accept three “out” ladyboys?
*Disclaimer: “Paradise” is a relative and subjective term, but in this case it means that you don’t mind the smoke fires (what is with everyone that they get a tiny pile of trash and they have to have a long, smoldering fire with thick smoke?), jellyfish (this is the scourge of nearly all beaches in Southeast Asia but few websites mention it to their eternal shame), murky water from the storms, and possible bedbugs (see below). Over time the you forget about the bad things anyway. It was paradise* for me. 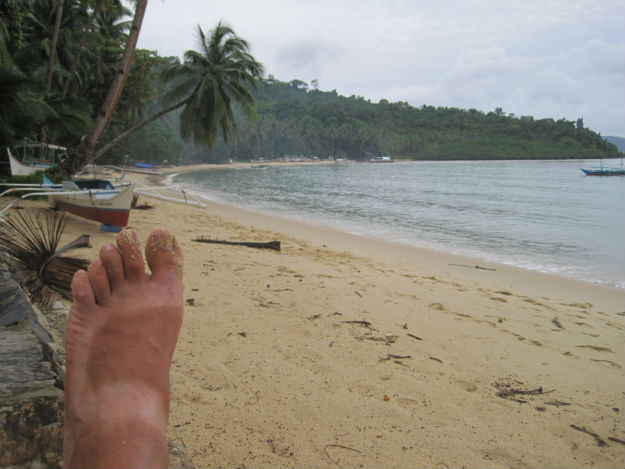 Foot in the foreground, smoke in the background 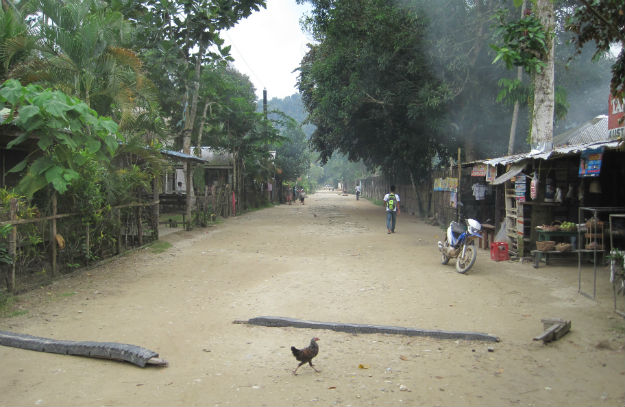 I got these red spots on my last night, but I’m still not sure what it was. Either my finger was touching the mosquito net or they are bed bugs or some other exotic malady. I have since shaved the hair on my finger. Thank you.

From Port Barton I went north to El Nido, famous for beautiful islands off its shore and world class diving, but boats weren’t going out at all in the bad weather. It was a waste of time to go. Even if there was good weather, the town of El Nido doesn’t inspire poetry, I’ll just say. Stay in Port Barton. 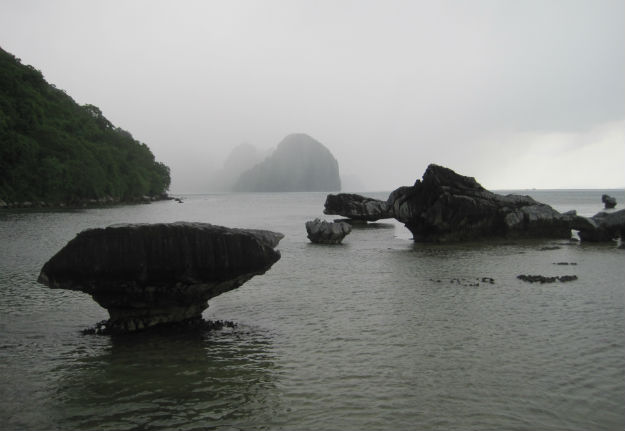 Seconds later this storm unloaded on my head in El Nido. 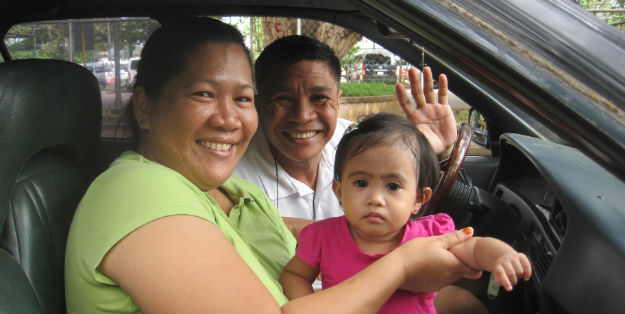 Back in Puerto Princesa I was hitchhiking to the airport when this family stopped for me—and then got hit from behind by a tricycle (a motorcycle with a sidecar used for public transport) who was trying to get my attention to go with him. The man quickly got out of the car to see what had happened, and I thought, “Oh no, here we go. He’s going to start a fight with the tricycle driver or maybe me (since it could be argued that I caused the accident.)” But this is the Philippines. There was no damage and the air force officer happily drove me to the airport with his family, telling me about the relief work he did in Haiti after the earthquake.
This was only the second ride I got hitchhiking in Palawan. There are very few private cars and I turned down rides of “400 meters” as one man estimated, and “500 meters” from a woman.

Practical Information
The good news is that the Philippines now gives you 30 days free visa for most nationalities instead of the old 21. Even 30 days is rushed for an archipelago. (There’s a lot of hand-wringing about why Philippines doesn’t get the tourism other countries do, but this is the most obvious problem. Copy Malaysia and give 90 days. Why not? Do you want the tourism money or don’t you?)
The bad news is that you really need to show a (fake) onward ticket. The last two times they have really been on me about it and judging from the travel forums, many people are getting asked. I showed my fake ticket to the check-in agent and she checked it mostly to see the date on it, which I made sure was less than a month away so I wouldn’t have to show a visa. Philippine immigration doesn’t care; it’s the airline check-in people who do. Here’s some background on it.
I really did pay US$25.24 to fly over an hour from Manila to Puerto Princesa on PAL Express which is Philippine Airlines’ domestic carrier. I bought it from the American version of expedia.com, not the Filipino one. Plus, I got to the airport many hours before and they let me take an earlier flight, which is how it should be, but rarely is.
In Puerto Princesa I walked from the airport—it’s far; I don’t recommend it—to Duchess Pension, 250 pesos ($5.75) for a single room, but for the love of Allah don’t get a room facing the south side. The neighbor’s roosters sound like they are inches away from your head with their ear-splitting cockle-doodle-doos at 5am. Brutal. Don’t stay there if that’s all they have.
A better find is Al Carlo’s Pension (formerly Kar-Wal Pension, tel 091-9834-2393 or 082-723-0284), but the only problem is it is a 10-minute walk from what would be considered “in town”. 250 pesos ($5.75) for a clean, modern room with a nice mattress, cable TV, wifi, fan, and even hot water.
The Puerto Princesa food find is run out of someone’s home nearby, Namaskar Vegetarian Haus, 59 Burgos Street, up from the post office. The sauteed kangkong with garlic is golden at 25 pesos (60 US cents). 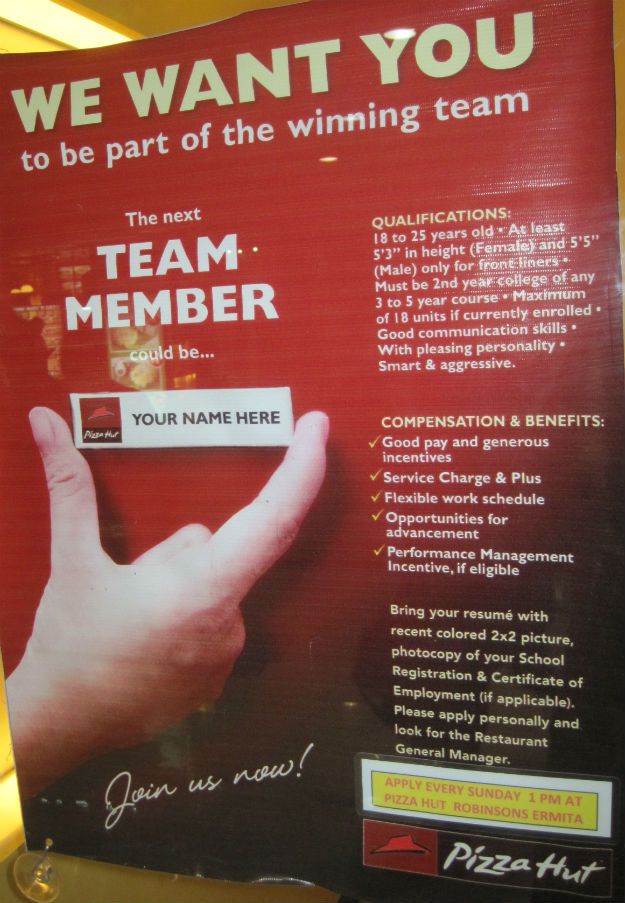 I love this stuff. Why stop there with the list of qualifications? “…shoe size 6-7, able to throw a pizza box 25 meters, can sing a medley of the previous week’s top 10 hits…”

I made the mistake of going to the Puerto Princesa tourist office. I came impulsively to the Philippines; I bought my ticket only two days before I flew out. I don’t know what I am doing other than the vague notion of seeing a dentist and checking out some of the Philippines’ 7107 islands. I’ve only got about 7100 to go.
I walk in to the office and a girl jumps up from her seat to greet me. She looked very qualified to work there: 5’4″, I’d say, very pretty, big smile, she appeared to be a second-year student taking about 14-16 units from teachers who were likely 5’8″, medium-length hair, married, no older than 35—and she had no answers to any of my simple questions. None. She helplessly looked to her mirror-image colleagues sitting next to her, who all went quiet. Is this what happens when appearances are more important than substance when they hire? She suggested I go to another office for better information, but she also had no idea how to give directions, and when I asked instead for her to mark it on a map, she confidently put an “x” to mark the spot. I realized it was an indiscriminate “x” when I went to look for the place and it was nowhere near, an unhappy discovery.
I didn’t visit Palawan’s most famous attraction, the Underground River, as tickets were sold out. It’s one of the “New Seven Wonders of Nature” due to some heavy Filipino ballot stuffing, but be careful what you wish for. Petra became one of the New Seven Wonders of the World and now the entrance fee is $70.
Next up: the possibly misunderstood island of Mindanao.