…this would be my story:

“Man hacked to death by angry mob after singing off-key at karaoke party”
Metro Manila police are investigating a gruesome homicide when an unidentified local man sang the Whitney Houston standard, “I Will Always Love You” at a birthday party, but things got out of hand when he was unable to hit the high notes, and a restive crowd took matters in their own hands.
The host of the party, JoJo “Bong Bong” Guzman, said, “It wasn’t just his singing. He had insulted Air Supply, saying they were overrated; you just can’t talk that trash without repercussions. Not in the Philippines. No way.”
A neighbor, Jinky “Lovely” Acosta, who heard the commotion was also unapologetic about the outcome, saying, “I could hear it clearly from my house. He started OK, he had the right pacing, the right syncopation, but then his voice broke on the chorus. He was disrespecting the song. I was sharpening my knife and ready to go over to take care of matters, but everyone else beat me to it.”
Another witness, Tito “Big Boy” Reyes, said, “It didn’t have to happen. If he had gone with something more in his range, “Total Eclipse of the Heart” or even “I Just Called to Say I Love You”, then he might still be alive today. Unfortunately, we’ll never know.”

(Here is a link for those of you not familiar with The Onion.)
This is my third time in the Philippines. It was on my last visit in the Visayas in the middle of the archipelago where the almighty force of music in the Philippines hit me, as is evident in this billboard in Cebu with the “Singer/Medical Doctor” title on the bottom left—the more important one first, of course. 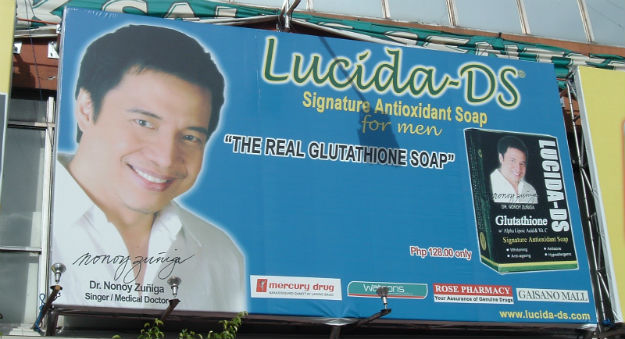 I wasn’t a passive observer to all the music around me. After a tennis tournament in Siquijor at a karaoke party I found myself nearly cheek-to-cheek with my opponent singing Danny’s Song (“And even though we ain’t got money, I’m so in love with ya, honey…”) We killed.
Quick tangent: look at all those tan Santa Barbara people in the crowd of that video. I went to school in Santa Barbara where I learned a valuable life lesson: don’t trust anyone pale. (Quick tangent rant: have you seen the newly-crowned Miss World, Megan Young? She won for the Philippines even though she is actually American and so white that almost no Filipinas look like her. Can Filipinas not embrace their very beautiful dark skin color? I see ads all the time for whitening skin creams and nonsense like this where women have the necks of Filipinos and the faces of ghosts.) 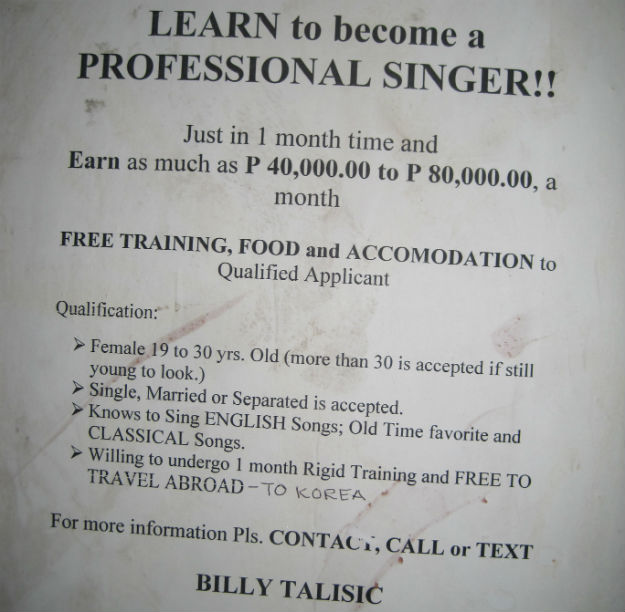 Filipinos are the natural born entertainers of Asia (though sometimes these ads are fronts for other occupations.) Even the kids are extremely talented and polished. An eight-year-old girl is the host of a variety show, and she’s remarkably focused for her age.

Music is everywhere. And dance. And sometimes just idle a cappella singing. When I hitchhike I am often stuck in the middle of nowhere but seemingly never out of distance from a karaoke machine or loud TV where someone is singing anthemic, power love songs. It’s always when you least expect it: at a Jollibee’s (a fast food chain) the girl behind the counter took my order and then as we waited for the food she was showing her colleague how to twerk; the check-in agent for Cebu Pacific Air, hearing a song in the airport waiting lounge, burst into a quick dance when a song came on, refreshingly unconcerned about modern notions of professionalism; a church service on TV where suddenly a dozen dancers broke out in formation on the altar and in the aisle, all in sync, performing a routine.
Then there’s the stranger-than-fiction story of Arnel Pineda (Hey, Oprah, we can understand him, we don’t need subtitles, thanks. Who is wearing more makeup: Arnel on Oprah or Megan Young at Miss World?) who grew up as a street kid in Manila and now finds himself as the lead singer in Journey, discovered via his YouTube videos. Journey could probably tour Philippines for the rest of their lives, so proud are Filipinos of Pineda’s success.
Perhaps sensing this, Bruno Mars, who is one-fourth Filipino, made a smart move in announcing that he is proud of his Filipino roots. If his singing career in America ever fizzles, he can always come here to have a second life. Put it this way: Bruno Mars will never go hungry.
I’d just like to take this moment to mention as someone with a travel website, I am proud of my Filipino roots. Thank you.

Practical Information
None! Next time there will be a ton as it will be all about Palawan Island in southwest Philippines.