If I had started my Philippines trip in Cagayan de Oro, I wouldn’t have left. I’d have spent my whole month there playing ping pong. Even without ping pong—do I have to call it table tennis?—I still might have felt that way. Cagayan de Oro, a medium-sized place on the northern shore of Mindanao island, is my favorite city in the Philippines. 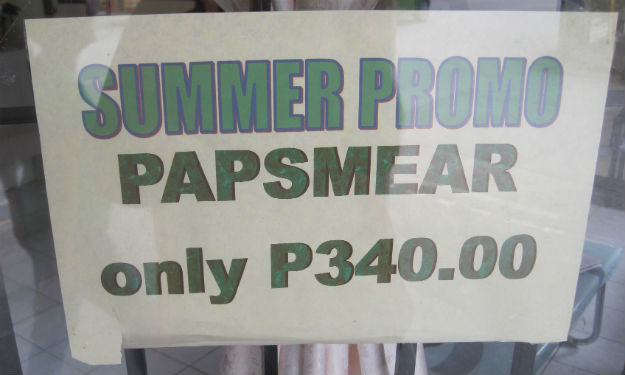 There you go. The Dromomaniac is all about saving YOU money! 340 pesos is about US$7.75.

Locals would ask me if I had done their famous whitewater rafting, went on Asia’s longest zipline or visited the national park, and I would sheepishly admit that I had been hanging out under an overpass at a ping pong club all day. This is the difference between me and a real traveler and why I travel too much. I’m not traveling the right way—yes, there is a right way—but it’s a discussion for another time. Nonetheless, if travel is to experience things you can’t see or do at home, then playing ping pong fits in perfectly, because when do I ever have the chance to play high-level ping pong?
In most other countries, it would be a little awkward: who is this guy taking pictures and video of kids playing ping pong? At a minimum I’d be regarded with suspicion, but the inherent Pinoy friendliness to outsiders opens doors. I told everyone the truth, that I was blown away by their skill level at such a young age and I hoped to play a little with them. I found myself hitting with a tiny kid of unlimited energy whose chest came to the level of the table. I asked the coach, “Is that your daughter?”
“That’s my son,” he said.
Oh.
He was eight years old. I could tell it was the son of a coach from the relentless way he played. No sissy rallying. When you see an opening, you go for the smash, and time after time the ball whizzed by me. It was fun; I couldn’t help but laugh every time I retrieved the ball. 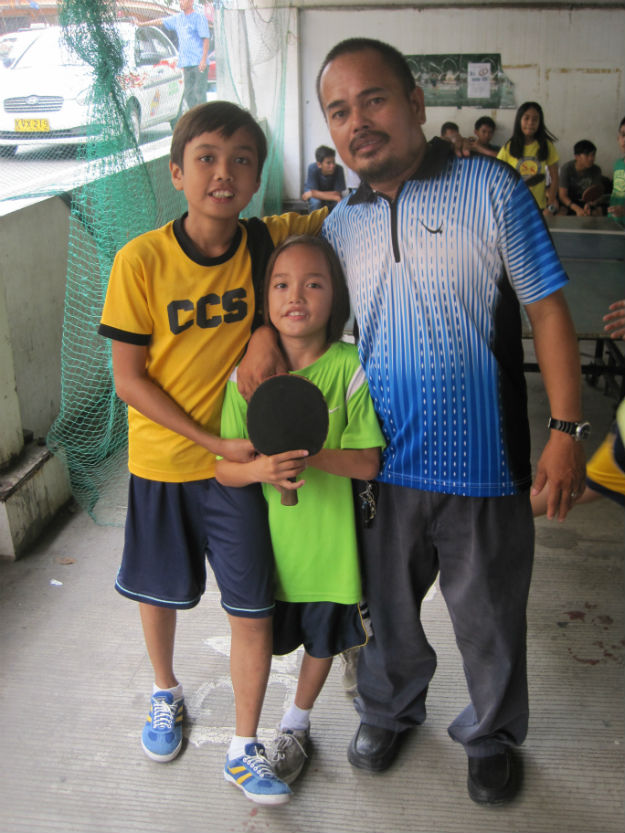 This is Omar, one of the ping pong coaches at the club and two of his sons. I had to smile when Omar needed ten full seconds to say about the eight-year-old, “His mother is from…uh…she’s from…Canada!”

The older of Omar’s sons in the photo, a twelve year old, was standing with a friend who was wearing a necklace with a cross hanging from it. I knew Omar’s kid was Muslim and I was going to have a kumbayah moment with them about kids of different religions co-existing peacefully. I pointed to the boy’s necklace and said, “You are Christian?”
“Catholic!” he corrected me.
“Whatever.” To Omar’s son, I started, “And you are Muslim…”
He interrupted me: “I’m Abu Sayyaf!” (a Muslim terrorist group) and they both broke out into laughter.
I’m still going to call the encounter an inspiring triumph of religious tolerance.

I took tons of video, but could never get good action. I apologize. This clip, if you can’t see it below, isn’t the best representation of their skills, but it was fun to watch the beginning against his big brother and the way the other kids react.

This video is just five seconds of one nine-year-old prodigy. I love the way she flips the paddle after a winning shot:

It was cool to watch them practice hitting forehand to forehand at Forrest Gump-ian speed. The kids are so polished and poised that I temporarily forget they are so young, but then a 10-year-old girl will point to the kid sitting next to me and say, “That boy, he’s ugly, right?” Or, Omar’s eight-year-old will suddenly sulk and go under the table to cry.
I sat with the mother of one of the kids and a teenage girl. In our conversation the girl made a joke that she wanted to come back to America with me. The mother turned to her and teased, “Oh, do you like him?” She giggled. The mother asked her, “How old are you?” The girl said 19. The mother then turned to me and asked, “How old are you?” I said I was in my forties. The mother then shrugged her shoulders and smiled as if to say, “So what’s the problem?!” 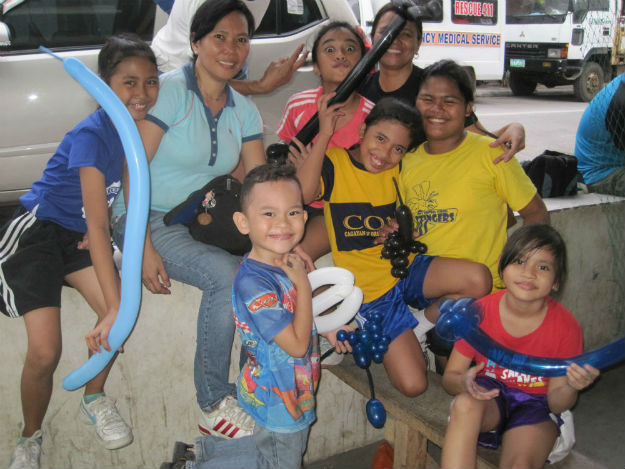 I made animal balloons for some of the gang. As kids do, they immediately began disassembling them. 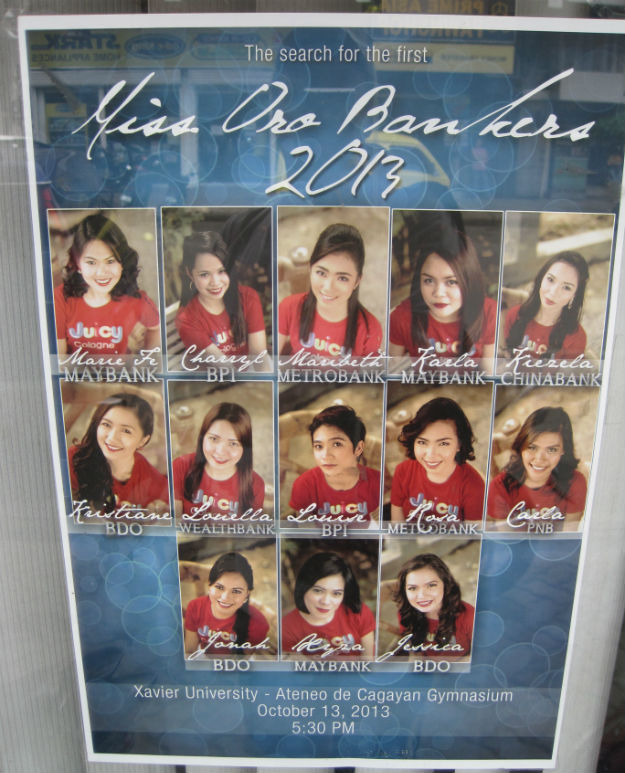 A bank teller beauty pageant, only in the Philippines.

I went to a CouchSurfing get-together and met an impressive girl who told me something to chew on. She said that even though she is a fellow backpacker, it is impossible for her to go up to foreign travelers here to say hello. As a Filipina, the moment is too loaded with implied intent.
She told me a funny story: a German guy offered her 500,000 pesos (about $11,500) to be his guide and lover for two weeks in the Philippines. She countered with, “How much just to be your guide?” I told her to give him my email address. Hey, these are recessionary times! $11,500 buys a LOT of grilled bananas on the street. As we say in America, You can’t look a gift horse in the mouth.
I don’t know how the German met her, but I was joking that her CouchSurfing profile’s only photo might give some men the wrong impression. 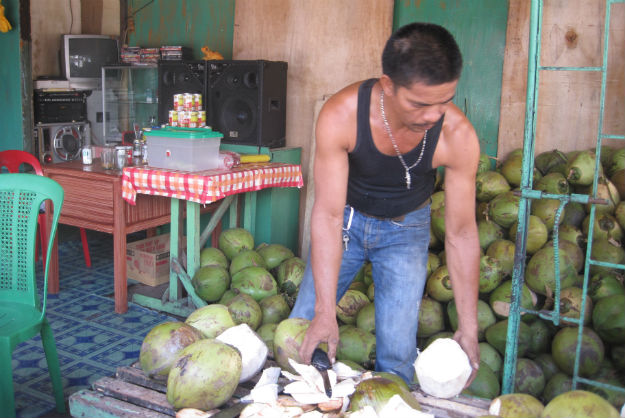 My neighborhood coconut man. 20 pesos (45 US cents). Note the large speakers in the background, essential for serious karaoke.

Practical Information
Cagayan de Oro’s new airport in Laguindingan is way, way west of town. It’s also the smallest new airport I’ve ever seen with only two gates. From town you can take a rarely-running shuttle for 200 pesos (43 pesos = $1) or just take any regular bus from the Bulua bus terminal for 37 pesos, get off at the junction and hitchhike the last 4km, as I did with no problem.
I stayed in Cagayan Park View Hotel (tel 088-857-1197.) A fan room with outside bathroom and cable TV was 350 pesos ($8) a night. It’s on Plaza Divisoria near Capistrano across the street from the ping pong club. (It’s very good money for value in the Philippines if you go where the tourists aren’t.) Having an outside bathroom doesn’t sound ideal to a lot of people, but a bathroom in the tropics usually means bad plumbing, mosquitoes, and cockroaches. Unless I’m sick, I’m content to do without.

Lina’s Eatery and Sanitary Massage Clinic looked to be just an internet cafe, but if I had walked in I am sure I would have been offered all kinds of services, none of them sanitary.

Don’t expect to glean much information from the tourist offices in the Philippines. They are black holes. In most cities in the world the tourist offices are where the tourists are. In the Philippines they make you go find them. In Cagayan de Oro, like Camiguin, it is buried in a city services building complex, no signs, no one knows where it is even though they confidently point you somewhere. (I am really getting tired of that.) When I did find it, all the lights were off, everyone was asleep, and the air conditioner was on full blast. Someone slowly got up, ambled over to find me a lazily-designed map, and shuffled off to go back to sleep.
At Davao airport the tourist information desk at arrivals was unstaffed “because it’s Saturday” I was told.
At Manila airport terminal 3, its new showcase terminal, when I arrived I asked the girl at the tourist information counter if she knew any guest houses near the airport. She said no. I asked if she knew any guest houses at all in Manila. She said no. She heard there was a new hostel somewhere, but didn’t have any information. How many thousands of people come through the airport and ask the same questions? What a waste. I knew if I asked her how to go somewhere her one and only answer would be, “You can take a taxi.” 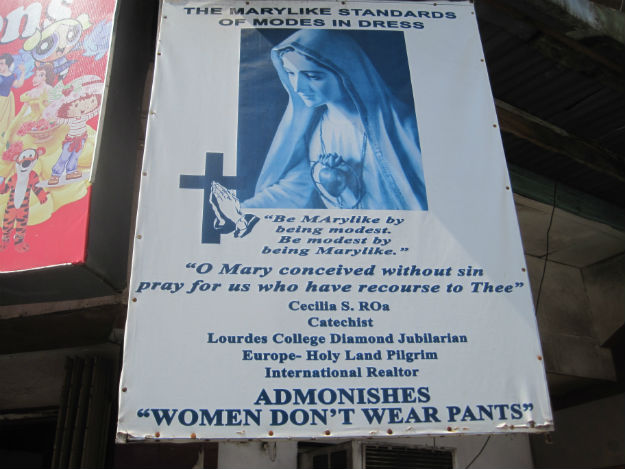