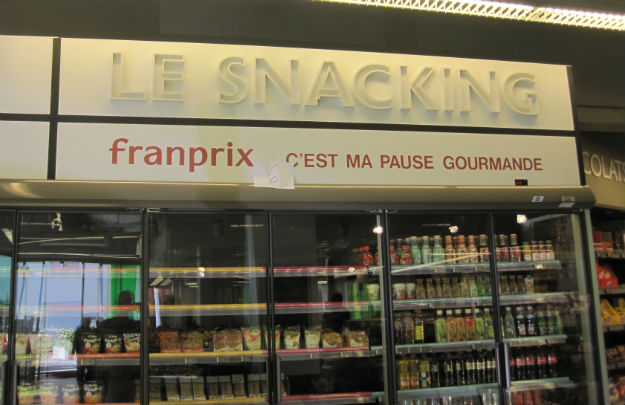 Le snacking, les chewing gums, les chips—France, you are powerless against almighty English! All your base are belong to us!

Let’s get the hitchhiking stories out of the way first:
Amsterdam to Paris was remarkably easy, the last ride with an Armenian-French guy who wanted to talk politics. He asked what Americans thought about France and my opinion on the brewing Gaza/Israel war. I said that the average American doesn’t think about France and that I thought America is more in the pocket of Israel than the other way around.
He wasn’t satisfied with either answer, so he prodded and we talked and talked. He was upset at how heavy handed the Israelis have been and said there was a need for humans to be respected everywhere. For a mental and physical rest after this long discussion we pulled off the road at a highway gas station. I pointed to the clumps of people picnicking under trees with garbage strewn around them and asked, “What do you think of gypsies?”
Reflexively, he blurted, “I hate them!” Realizing this wasn’t in the spirit of what he had been saying, he was quiet for a moment but then, uncontrollably, went on: “They take and take from the state and contribute nothing. Nothing!”
He left me almost under the shadow of the Arc de Triomphe where he lived and where I coincidentally had an appointment to meet a friend. (It sounds crazy to make appointments that are dependent on hitchhiking hundreds of miles, doesn’t it?) She was with a friend who lives in Japan and, coincidentally, we knew two people in common. This happens more than you’d think; I get around! We had the Tour de France’s last day happening right behind us, but we watched on the TV screen in the cafe, which felt very decadent, very Parisian. 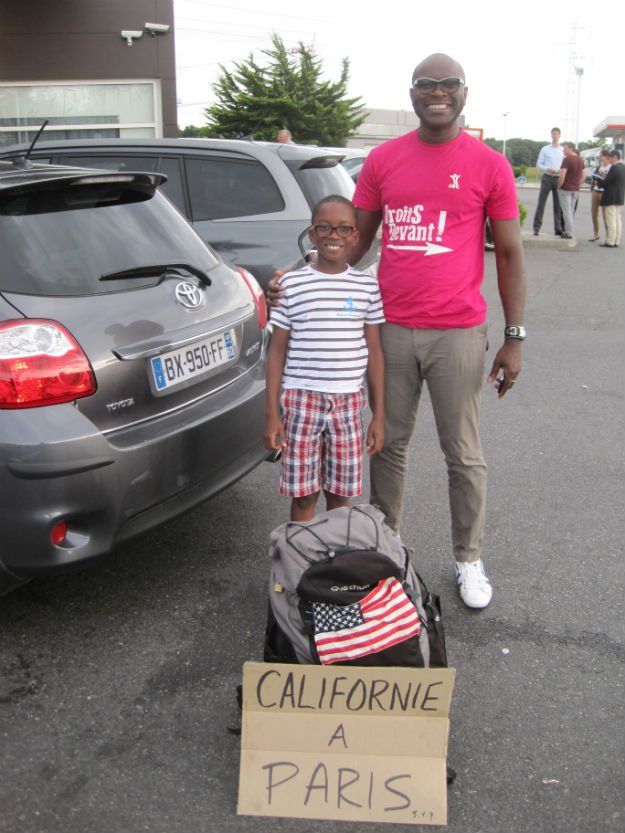 I hitchhiked from the south back to Paris with a “CALIFORNIE A PARIS” sign to great effect. (It’s all about the font.) I made 675km (420 miles) in eight hours in two rides, both from men with their sons in the back seat. The driver above was Congolese-French. My first question to him was if he knew Bisso Na Bisso, a group with the second best African song I know: “L’Union“. (The best is “Amadamara” by Freddie Gwala. The best French song of all time is Belgian: “Ca Plane Pour Moi” by Plastic Bertrand.)
It’s not always rosy, but there are strong possibilities for hitchhiking in France. To contrast this with more traditional forms of travel, a friend bought a Paris-Grenoble round trip train ticket for 155 euros, which is about what a Brussels-Zanzibar one-way ticket is going for at the moment. 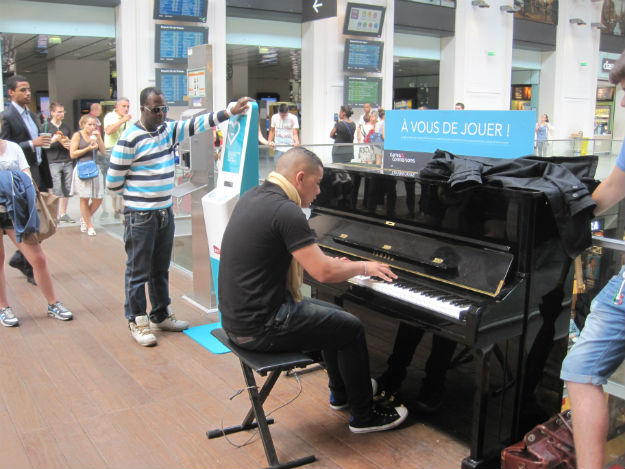 In the St. Lazare train station in the middle of Paris they have a piano for anyone to come along and play. Is it not the most fantastic idea? Then I went to Forum Des Halles shopping center where they had the same thing, but a homeless guy banging on the keys bummed everyone out.

I feel like the last one to discover France. I’ve been here several times before, but really only in and around Paris. I am hesitant to describe what I see because it is old hat for everyone. Does anyone really want to hear, “Wow, the Eiffel Tower is even better in person!” or “OMG! So many cheeses!”? What about “Every time I tell myself I am going into the supermarket for one thing, I find myself staring at stuff for half an hour?” or “Look at all the town names that are French products/events: Limoges, Le Mans, Cognac, Bordeaux, Dijon, Roquefort, Evian!” No? OK, I’ll move on.
I’ve been in France long enough this time that my high school French is taking off, slowly but surely, and it’s fun to overemphasize vowels and then be corrected by locals raising their chins and contorting their lips. What other language has trickier diphthongs? I already have a sore throat from all the guttural “r” sounds. Why is the “l” sound in “ville” but not “fille?” How am I supposed to pronounce “Houilles” and “Aout?” “Poubelle” sounds like a nickname I would call my girlfriend, but it means garbage can.
I was excited to get invitations to go to the countryside. At first I didn’t feel the full impact of the blog of my friend Caleb about the meals his wife’s family was making for him in northeast France until I visited my friend’s foodie family in the south and subsequently, to Caleb himself. 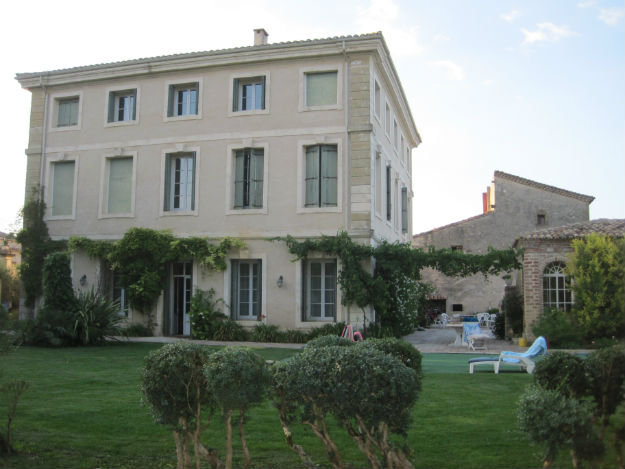 I went with a friend to her family’s home, just your average 11 bedroom, 11 bathroom little lean to, in the south of France near Nimes in the province of Languedoc-Roussillon, “Roussillon” being a fun word to say. On my first trip to Europe a billion years ago I made a quick tour of southern France, but I was running on fumes and had one eye towards home, so I hardly remember it.
If you have a million euros or so laying around doing nothing, this place is for sale. A pool is just off-camera to the right. 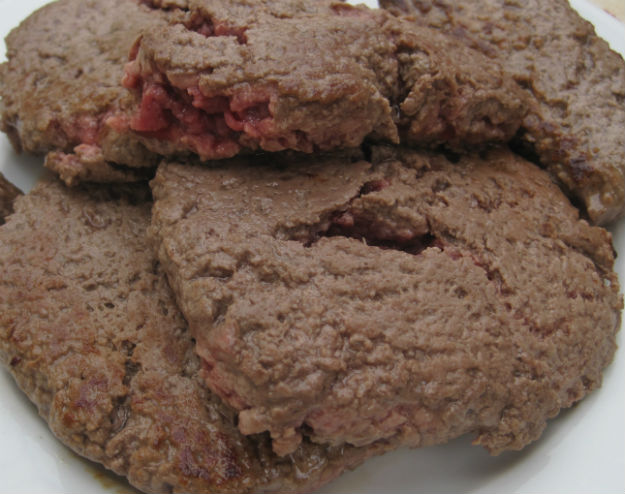 My friend prepared for her kids steak hachee cru, nearly-raw hamburger. I might be wrong, but this could more accurately be called “bleu” since “blue” is meat very lightly cooked. I wish I had taken video of how short the meat had been fried. I assured her that she’d be arrested in USA for this. 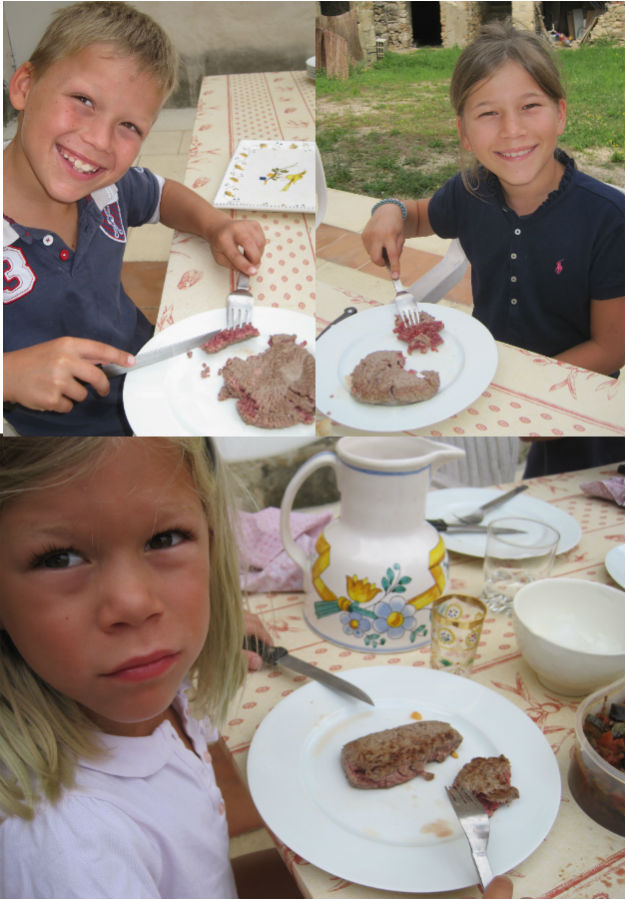 Let’s say most of them liked it. For the next few days I pestered the kids, “How’s your stomach? How’s your stomach?” There are a lot of raw milk cheeses here, too. I guess the French know how to do it safely. It’s allowed only in a small number of states in America, so it’s the kind of thing that gets you thinking, not to mention the way French eat, what they eat, how much they eat, and in what order they eat it. The French are different from you and me. 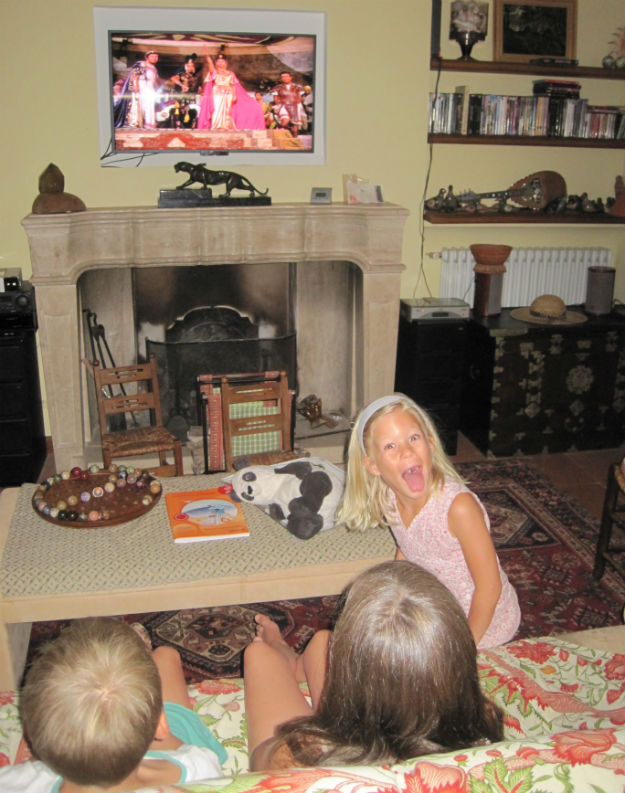 Cartoons? No. Discovery Channel? No. It’s the kids watching for the umpteenth time a DVD of the epic 1951 American film, Quo Vadis. Unbelievable.

I’ve read about how economically stagnant Ramadan is in the Muslim world where productivity falls because many Muslims take a month off for their religion, but is France any different? August is not the time to be here if you have a choice. Countless small businesses are closed for the month and tourists quickly take over the center, primarily sullen Chinese tourists.
I suspect a French person would shrug that off, unapologetic, and declare that they don’t live to work, but work to live, and it’s humane to take a month off—plus the many holidays throughout the year, the 35-hour work weeks, the strikes…maybe that’s why the Chinese look miserable: they’re envious.
PRACTICAL INFORMATION:
We all know the Paris metro is convenient, reasonably priced (1.70 euros a ticket including transfers, cheaper than most big-name European capitals—Hey Budapest, explain yourself, please!) and drips with atmosphere, but it can also be hot, crowded, and stuffy. (I witnessed a woman pass out; I was about to take her wallet but then bystanders began murmuring their disapproval. Killjoys.) It’s underrated to go by bus in Paris. There are no boring stretches, it’s usually uncrowded enough to have a seat, and you see the city from a different perspective.
For cinephiles, this is a dense, interactive map of Paris where movies were shot.
Hitchhiking:
I can’t resist giving hitchhiking tips despite no one caring. (One guy cares. I got an email last week from an American asking for my phone number so we can discuss the best way to hitch out of Tapachula, Mexico, where he had been stuck for days.)
I’ve always hitched between Amsterdam and Paris via Brussels and Mons, but I found it better to go through Gent and Kortrijk. More through traffic.
Twice in France the police stopped to tell me not to hitch on the highway, which I had no intention of doing. I half-expected them to come back and tell me to floss after brushing my teeth. This may come from the fact that I read a lot of people recommending to hitchhike at the “peages” (toll booths) which is difficult, dumb, and dangerous. You want to be left at the bigger highway “aires” with gas stations, otherwise you can be seriously stuck. The exit signs make clear what is there which unfortunately can contradict the highway’s official website. Yes, I do waste my time checking out highway websites. Information is king!
You still with me? Last bit: to hitchhike eastward from Paris, since you have to pay a good chunk of change for the suburban train to go way out of town to the best starting point, instead I went to blablacar.com and found this well-decorated woman who was driving that direction and left me at a highway gas station for a few euros. This is her band. She plays the theremin.
Flea markets
In Paris there are marches aux puces (flea markets in a fixed place; Clignancourt is for pros, Montreuil is a waste of time, Vanves is the best) and brocantes (mobile flea markets), but both can be burdened with too many professionals. There are also vide greniers, literally “empty attics” where people want to get rid of stuff. I bought a couple of expired French passports for four euros each last time I was at the Vanves flea market, adding to my formidable passport collection. Everyone thinks I am a spy for the CIA anyway, so I may as well play the part.
I’m a huge fan of Decathlon stores, a French sporting goods chain found in many countries. I now have my backpack, day pack, shoes, sandals, shorts, swimsuit, shirt and hat from there. In sum, France is a wonderful place to have everything stolen. #travelskills

Why don’t you stay with me? You can follow along with RSS, subscribe to an email feed, see what’s cooking on Facebook, pray that I’ll say something worth remembering on Twitter and if you are really slumming it, there’s always Google+ where we will follow each other for eternity, I promise.