I left home eight months ago today. Thank you.
Greetings from Hungary! Hungary is the kind of place where a girl with understated, smoldering beauty—which is hard to consciously pull off—will passionately and with great depth discuss her place in the world, and then crush you in ping pong all long, long before her fifth gin and tonic. Hungary is so great I am going to leave soon. I plan to buy a ticket to head back to Asia. I’m going home. The long way. 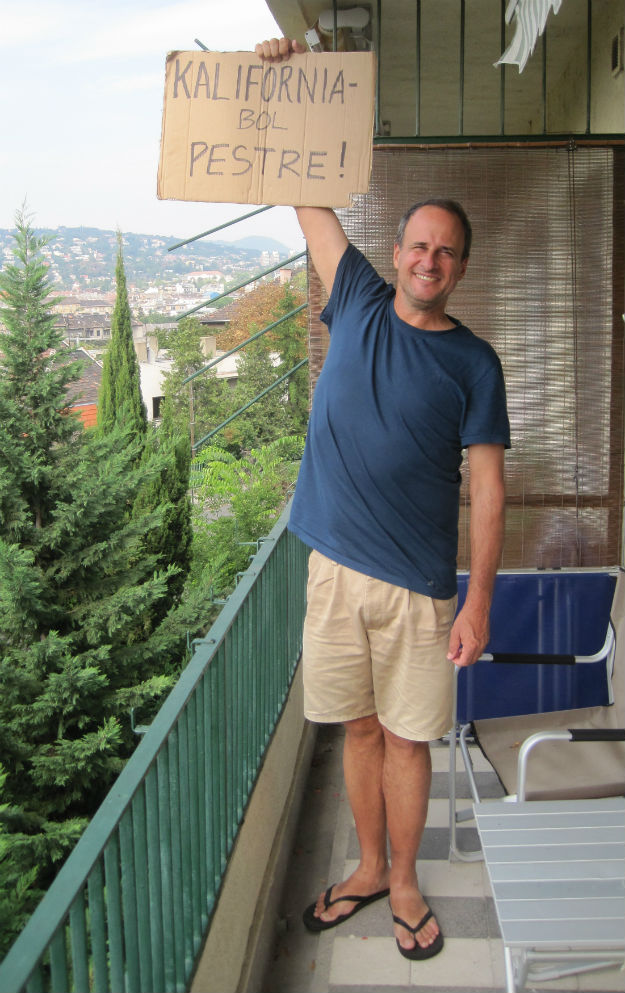 My “California to (Buda)pest” sign worked like a dream. Apparently my irresistible face from the previous stretch of hitchhiking is pretty resistible because when I tried hitchhiking without a sign, I languished. Lesson learned. 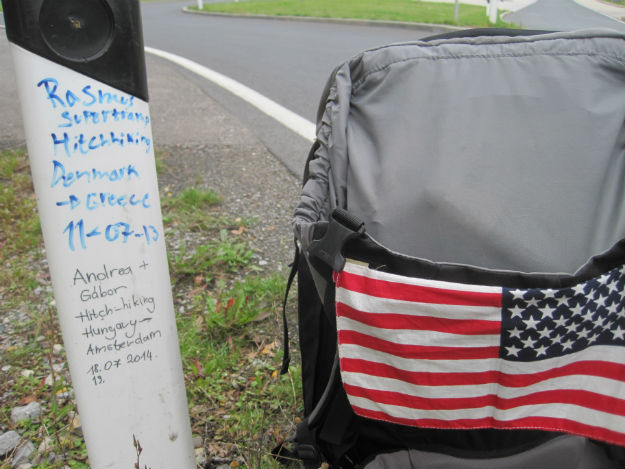 Everywhere I hitchhike I like to check the messages other travelers write on the poles and guard rails where we stand. “Rasmus Supertramp” is an Into the Wild reference, the book of the present traveler’s generation. (If I were a serious blogger/businessman, I would have a link to an Amazon store and I would get 50 cents or something if you bought the book, but I can’t bring myself to do it yet.) The notes hitchhikers scrawl as they wait can seem as desperate as dying in a bus in the Alaskan forest if it’s a bad place to hitch from, such as “Stuck here for 22 f*#@$%! hours!” 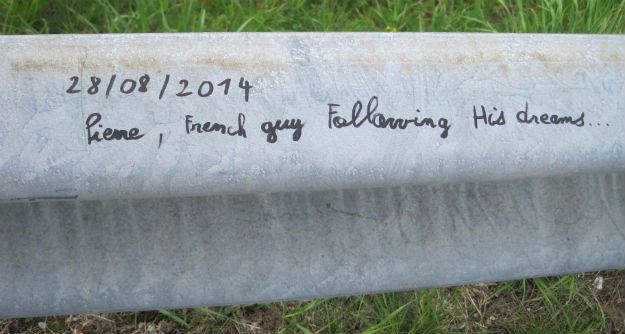 Pierre’s dream was to stand in the rain at a Swiss highway gas station. Dreams do come true! Follow your dreams! Next to this another traveler wrote: “Why do only foreigners pick me up in Switzerland?”

It’s one thing to act out being a hippie while hitchhiking and say to myself that when I get there, I get there, because that’s life on the road, dude/baby, but it’s another to have a welcoming friend who forgives me for arriving at crazy hours, offers to pick me up outside of town in the middle of night, and always let’s me overstay, and that is my friend Peter Nagy (as it has been Robin MacAlpine in the past as well as numerous others over the years that I feel indebted to.) A big, embarrassing, public thank you. I broke his blinds, too. He had to call the landlord over and everything.
The New Hungary
I’ve been coming to Hungary since 1986 and I doubt two years have ever passed between visits since. (I wrote something on my last visit 18 months ago.) I’ve been in Hungary more than any other foreign country even if I don’t include the year I taught English or the three operations I’ve had here, but it’s hard to keep knowing a place that’s always in flux. When I arrive I’m always unsettled by the changes, but by the time I leave it feels that the essence of Hungary has remained the same, while wondering how much is irretrievably lost with each passing year.
On a practical level I have noticed more and more people are speaking better-than-average English. I can ask questions in Hungarian and get answers in English. This never used to happen, but now I get it from the most unlikely source: metro ticket inspectors, who are traditionally far from being multilingual.
It must be a simple generational change. The Wall Street Journal once called Hungarians “the supreme masters of glumness.” It’s famously pessimistic, always with a high suicide rate (presently #6 in the world.) “Magyarorszag”, the name of the country in Hungarian, is an ancient word emanating from nomadic tribes coming over the Ural Mountains that means “glass half empty.”
But that joke doesn’t fly any more! Not in the New Hungary! Everything’s changing. I even once thought I detected a slight twinge in a driver’s face as he considered for the briefest of moments to stop for me at a crosswalk, but I could have been mistaken. There are new bike lanes sprouting up in town, cyclists actually using the bike lanes, and I witnessed cyclists stopping at intersections as if this is Amsterdam. It’s all pretty heady stuff. I’m only beginning to process and digest it.
I might be mislead by my first impressions; I just got here. I’ll be visiting old friends, making a pilgrimage back to the town I used to teach, Pecs (pronounced “paytch”), and trying to get a feel for what’s going on. Then I will keep all the insight to myself and just post photos of envelopes instead. Give the people what they want.
Not everything changes in New Hungary. It’s still a world leader in public displays of affection. In a city park I think I witnessed a woman conceive. 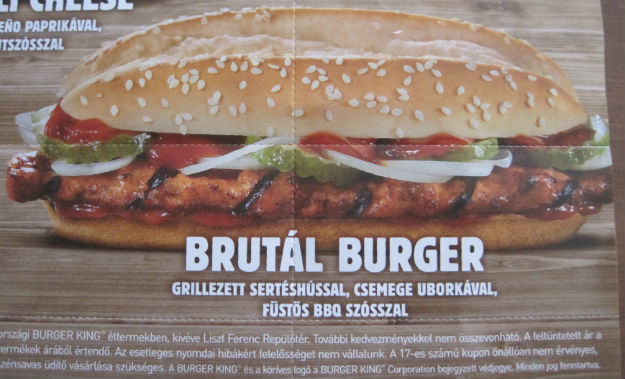 Truth in advertising from Burger King. 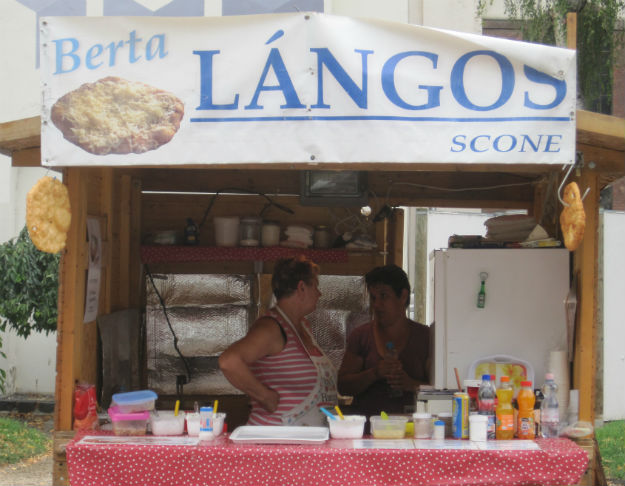 I feel compelled to apologize to the United Kingdom for this defamation. Langos (deep fried dough) is far from a scone and you have to think twice before eating food that you can hang on a hook all day, as you can see on the sides of the sign. 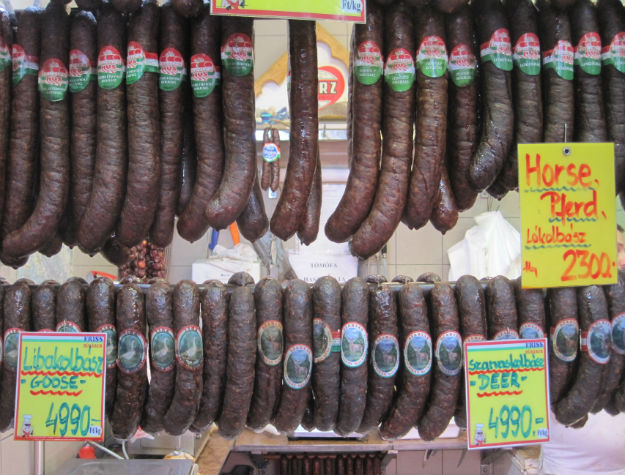 Exotic Hungarian sausages, an exception to the no-hanging-food rule. Big fan of all these, especially the horse which has a nice tang. No visit to Hungary is complete without a little spicy horse salami indigestion. 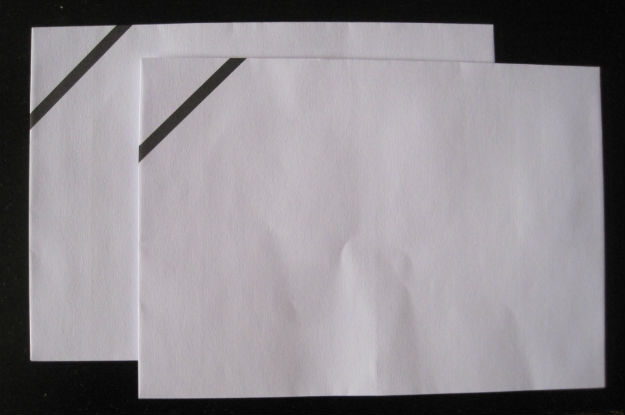 I like to buy these envelopes used for mourning and funerals. Don’t judge.

My favorite thing to do in Budapest is helping tourists with directions. If I see someone squinting at a map, I pounce, asking if I can help them find something. Only about two out of ten people look me up and down as if they’ll need to describe me to the police later. I do this all the time, all over the world, even if I hardly know the place. I get a charge out of it.

Practical information
Though I’ve been on an all-hitchhiking bender lately, I have used Oszkar for rideshare in the past. It’s possible to go from Budapest to Vienna or Pecs for around ten euros, much cheaper than the train.
I always advise travelers on their first trip to Europe to see a few of the places that resonated with them as a teenager, your Parises, Venices, Londons, etc., leave some space for the Budapests and Krakows, and then stretch yourself with an Albania or an Armenia. I think it’s wise to build up to the less-easy countries, but some travelers just dive head first into a Moldova.
Why don’t you stay with me? You can follow along with RSS, subscribe to an email feed, see what’s cooking on Facebook, pray that I’ll say something worth remembering on Twitter and if you are really slumming it, there’s always Google+. (I’ll follow you back!)