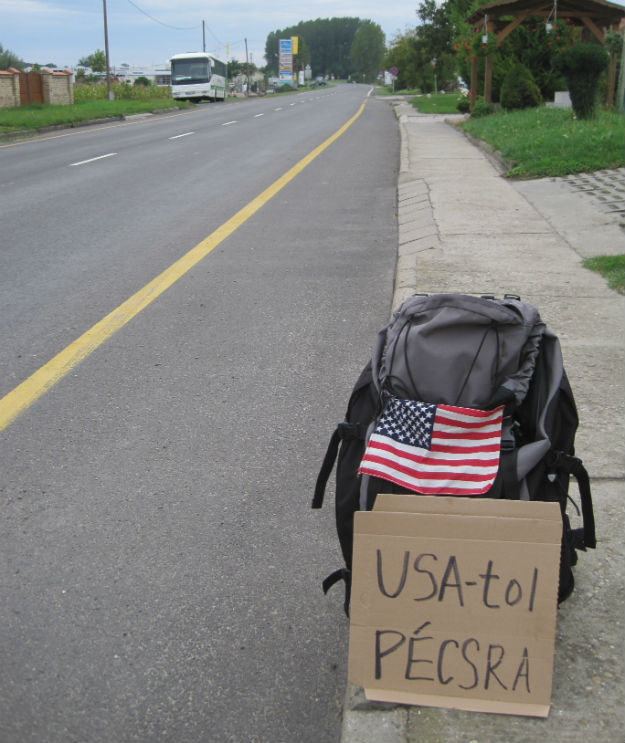 My hitchhiking sign, riddled with mistakes, I was told later. (Hungarian is hard! Give me a break!) The sign is working. Even people who don’t pick me up are amused by it. The first driver to take me was flying to Boston the next day.

I once lived in Pecs (pronounced “paytch”), a provincial capital 200km from Budapest in southern Hungary. I was legal with a contract and work visa, not overstaying a tourist visa like I might be doing now. It was the only time in my adult life that I have lived in one place for eight months straight. (A few years later I worked six months at an internet startup in Silicon Valley and those are the longest full-time jobs I’ve ever had.) I taught English at a private language school despite having no experience, but back then being a native speaker was enough, and when the day came, I literally had a hand on my back, was guided into the classroom, and the door was shut behind me.
Even though it was a legal job, every pay day I was called into the director’s office where an enormous dusty ledger was lugged out for me to sign. I was paid in cash, then the ledger was put away and I was handed an envelope with more cash that made up the rest of my salary. Whenever I asked why this was so, I was given a vague answer akin to, “Don’t worry your pretty little head.” By the time I left Hungary I learned to not ask too many questions.

I don’t know what this billboard means or what is it is for, but that’s the quintessential Hungarian word. I can speak Hungarian, enough for simple conversations—hitchhiking Hungarian, let’s call it—which is a feat.

I first came to Pecs years earlier when I met a girl in Szeged—another great, under-visited college town in the southeast—and she brought me home to meet her family. Her parents were deeply unsure of me. I had long hair and my deep tan spoke of a life of excess leisure and irresponsibility, but they were welcoming nonetheless and her mother offered to wash my clothes. Like many washing machines in Hungary, it was placed next to the bathtub so the machine would empty into the bathtub instead of down its own drain. A while later we were all standing next to the bathroom when the machine grunted and spewed an opaque, deep black effluent into the bathtub for all of us to see. I was mortified, but the mother handled it with aplomb, first staring at the sewage, then, without looking at me, she quietly said we could wash the clothes a second time. 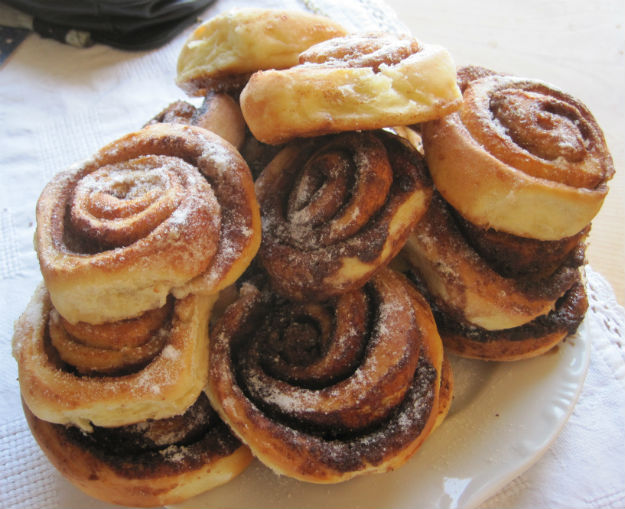 Homemade chocolate and cinnamon csiga, literally “snail”, from the mother. (I’ve known the family forever now; I’m on good terms.) I forget what these are called in English. Did I mention I have been away for eight months?

I lived in three different places when I taught in Pecs: once in Uranvaros (literally “Uranium Town”. Yes, I drank the tap water in Uranium Town and yes, I had gall stones removed a year later), once with Robin MacAlpine, and once I accepted an offer I couldn’t refuse. A woman would rent me her apartment in the center of town for something like $75 a month (I earned what a Hungarian teacher earned in those days: $230 a month) but there was a catch: it had no shower and every other weekend she wanted the apartment for herself, meaning I had to sleep somewhere else. There was another issue: she had a baby recently, the father of whom abandoned her during the pregnancy because he was convinced she would never get her body back to how it was. When she did, he wanted to be a couple again and she refused. He was furious and she told me she was afraid he was going to come by the apartment to confront her.
I agreed to the deal—Young Kent Foster didn’t even think twice about it; blissful ignorance is the best—and then late on the first Friday night there was a knock. My heart pounded. With much trepidation I opened the door. It was the woman with a new boyfriend. There was miscommunication about which weekends she wanted the apartment and it was too late for me to go anywhere else, so she, the new boyfriend, and I ended up sleeping in the same bed, terrified that the hothead ex-boyfriend was coming to slash our throats. 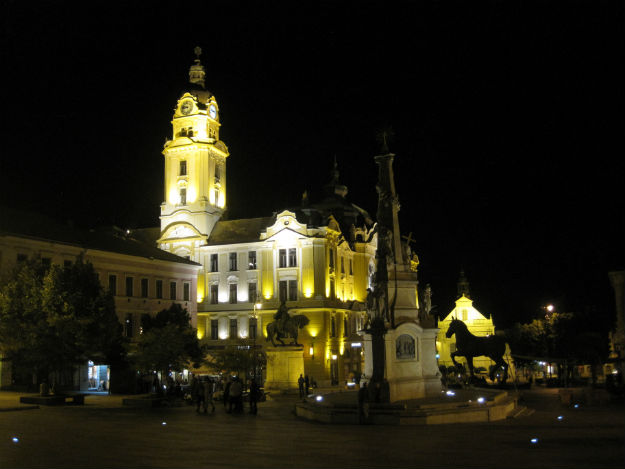 Pecs’ main square by night with an eight-meter-tall horse in silhouette. Teaching in Pecs was one of the best years of my life, the previous story notwithstanding. It was all very last minute, like most things in my life: I was offered the job and flew over less than two weeks before school started. Knowing myself, if I had more time to think it over, I might not have jumped at the opportunity.

It was heartening to visit old friends and students. I like to say that I was such a bad teacher that I have to speak Hungarian with my former students these days, but it’s not true, or we can say they learned their excellent English from other teachers.
I wish I was as optimistic about Pecs’ future as my students’. I am hearing that young people are leaving in the thousands. There is no work. The outlook is grim. Better-off friends in Budapest with good jobs tell me that leaving the country is always in the back of their minds because the present is a house of cards. It’s all anecdotal, but I would say few people are bullish on Hungary right now.

Practical Information
The Sunday flea market at the Vasarpiac, especially the first Sunday of the month, is a lot of fun. You’ve never seen so many people drinking brandy and eating heavy food at 10am. Don’t wait until the afternoon to go or people will already be packing up. I almost bought an old Munich, Germany license plate for 500 forint (US$2) but I can’t think of a country where I will be soon where I can mail it home reasonably, and I let it go. So sad. Bus 130 from the station goes there, among others, but Hungary has a system where they punish you for buying tickets on the bus: you pay more and they accept exact change only. You are supposed to plan ahead and buy tickets at kiosks, because good luck finding one open early on a Sunday.
I stayed at Ananas Hostel on a scruffy street on the east side of downtown run by a very nice couple. It is very literally a family home that has had a couple of rooms converted into a hostel. Nine euros a bed. 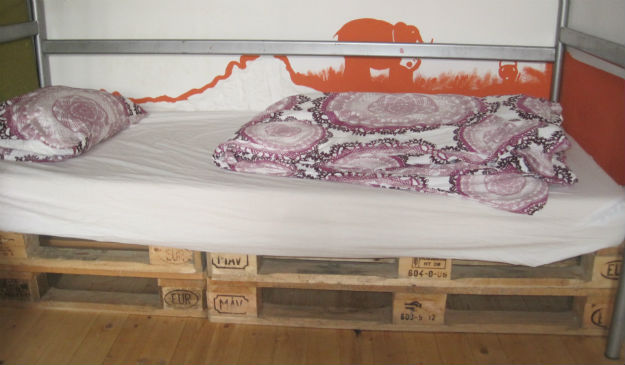 I was sent a link to the University of Pecs if someone is interested in studying there. It already has a very substantial foreign student population.
Why don’t you stay with me? You can follow along with RSS, subscribe to an email feed, see what’s cooking on Facebook, pray that I’ll say something worth remembering on Twitter and if you are really slumming it, there’s always Google+. (I’ll follow you back!)