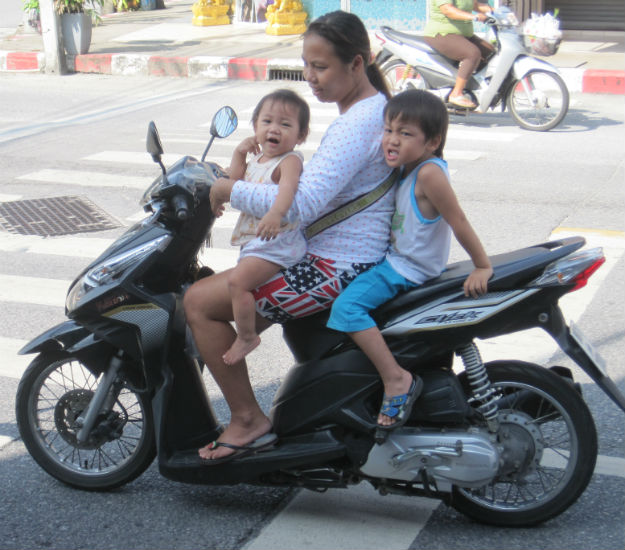 How fast would this woman’s kids be taken away if this scene happened in USA? The only thing missing is a cigarette in one hand, a cell phone in the other, and the woman being underage. I am assuming she has no license. I am always amazed that helmet laws are ignored here, too. Isn’t it the simplest thing? If they let this slide, you can imagine the police only very selectively enforce what they feel like. 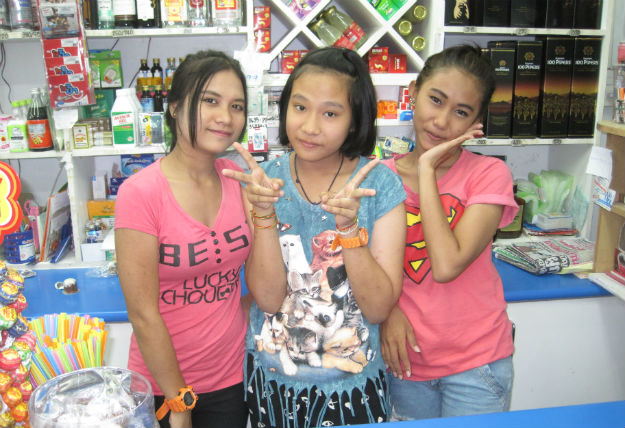 These girls work the night shift at the convenience store by my guest house. They are 18, 12 and 17 years old.

I was last in Phuket pre-tsunami—the 10th anniversary is next month—and I hardly remember it, so I was surprised to discover how wonderful Phuket Town is. The island has the same name as the main town which everyone ignores as they go like lemmings to the famous beaches on the west coast (more about them in the next post), but they’re missing out. Phuket has a well-preserved downtown that feels like a smaller version of Penang, which is high praise. It’s a nice accessible size, there are two very fun night markets (more about them in the following post), and the people are mellow and welcoming. I loved it. 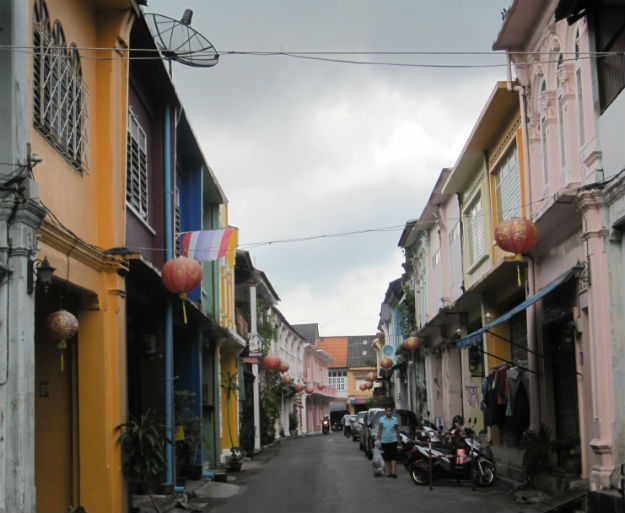 Quaint Rommanee Street in the old town. They call this Sino-Portuguese architecture, heavy on the Sino.

Last time I stayed in the oldest hotel in town called On On Hotel(!) In the Leonardo DiCaprio movie, “The Beach” the first scenes were shot there. Not far away were other buildings used as the French and American embassies in the classic, “The Killing Fields.”
A friend took me to a cool place on Yaowarad Road called Sanaeha where we saw a band. The singer asked if anyone had a request, and I shouted for “Yark Rung Dunk Dunk” by Palmy since it is Thailand’s gift to our ears. It’s a song by a Thai-Belgian hippy waif that I made my nieces watch the video of a billion times before they cried uncle, but I’m already their uncle and it didn’t stop me from insisting on another billion views. The best version of the video on YouTube has bad sound halfway through. Sorry.
This is the link of the fuzzy performance if you can’t see it below: 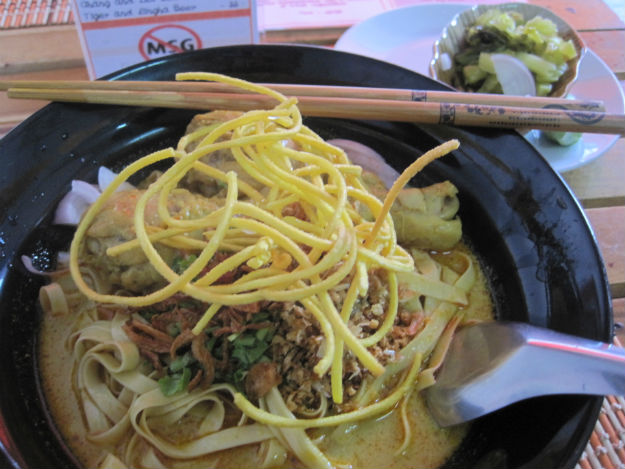 Across the street from Sanaeha is my favorite spot to eat, a place called Binkies that serves nothing but pizza and this spicy, coconut-milk sweet yellow curry. I can’t bring myself to try the pizza. I usually think of myself as someone who likes spicy food, but in Thailand I’m exposed as a fraud. Even “a little bit spicy” can mean “face melting.” 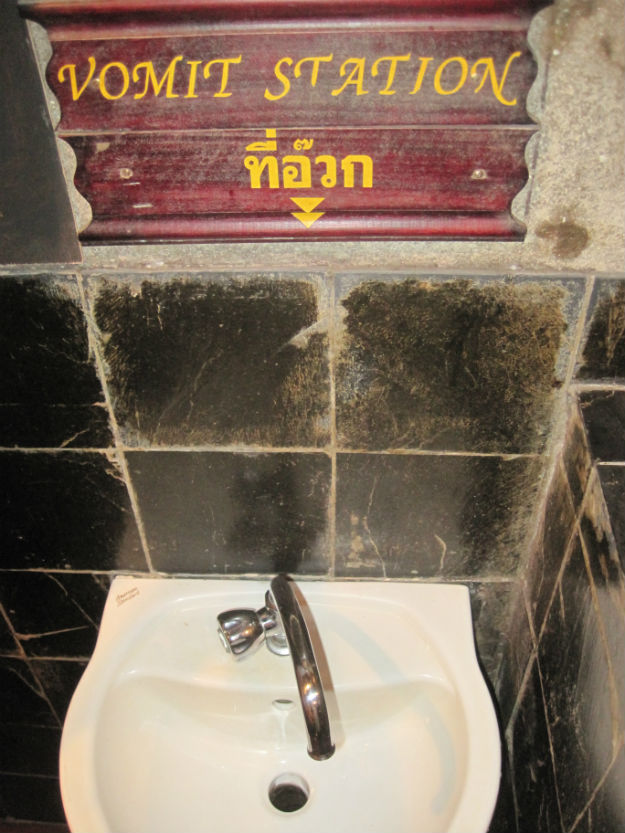 Vomit station at Timber Hut, a happening place in Phuket Town. This was a long night, ending with me hitchhiking 15km (10 miles) back to my guest house at 2am, remarkably easily.

View of Phuket Town from Big Buddha. This isn’t considered the nice side of the island as everyone goes to the west coast. 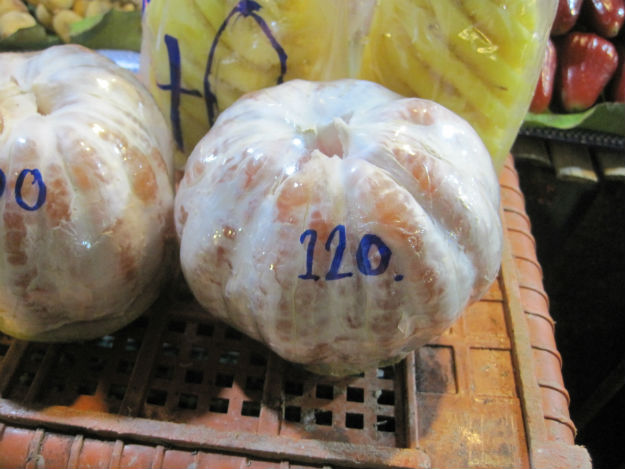 Thailand is cheap but it’s not crazy-cheap. It seems absurd to say if you just flew in from Sydney or London, but if you have been running around Southeast Asia a while you do a double take when you realize you just paid 60 baht (US$2) for a simple noodle soup or see pomelos for 120 baht each (US$4—and it’s pomelo season now!) or mangoes at 120 baht a kilo or US$13 for a bed in a regular hostel…

PRACTICAL INFORMATION:
I had the dorm to myself at Journey Guest House for 199 baht (US$6) with a flat screen TV(!) and a bathroom inside. It only sounds like a good idea to have a dorm room with a bathroom inside, but it’s just noisy and you hear e-ve-ry-thing about your roommates’ digestive system and how Thai food is treating them. When I finally got roommates I changed to a new place a few doors away, Yak Yai, where I pay 250 baht for a single room as part of its “soft opening.”
I’m looking for flights to California and the cheapest I saw had the punishing route of Bangkok-Copenhagen-Oakland on norwegian.com for $420 last I looked.
7-11s are absolutely everywhere in Thailand, often across the street from each other. I’m on a nostalgia kick as I devour slurpees and sunflower seeds like I am back in fifth grade. A guest house had a sign asking travelers not to shop there since they don’t contribute to the local community. I see the point, but I don’t completely abide: they’re easy, everything has prices on them, and there are no language barriers.

I’m sure it means something lovely and inspiring in Thai, but it’s still a bad name for a guest house. 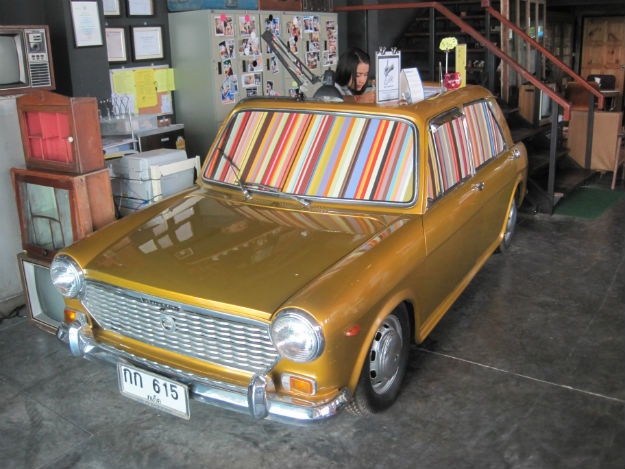 The reception at the hip Quip Hotel in Phuket.