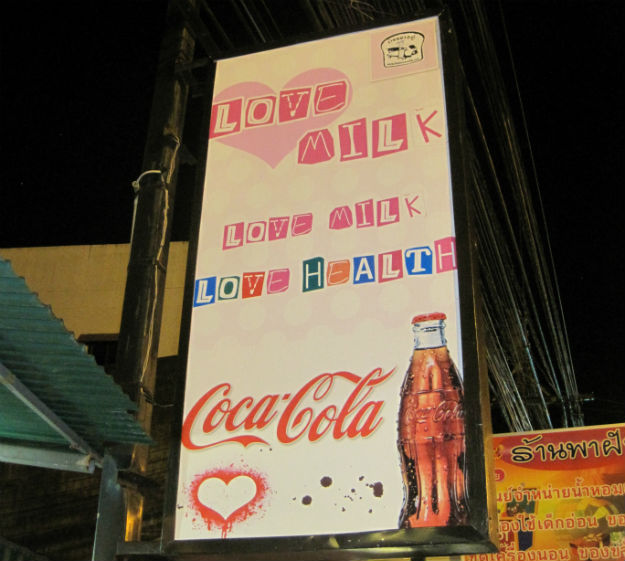 Greetings from Thailand, deep in the iron-hard grip of a military coup! This is probably my 15th-20th visit. Indeed Thailand is now under martial law, the result of a political stalemate, but you would never know it from being on the streets. I was once in Bangkok during another coup and I only read about it the next day. There is no noticeable difference for tourists, though a lot is going on. A personal question to ask Thais is if they are a red shirt (a supporter of the deposed prime minister Thaksin, very popular in the countryside) or a yellow shirt (the opposition, mainly middle class Thais, with yellow being the color of royalty). They will have a quick answer, but they may not want to say it out loud.

K Guest House laying down the law against the Big Three!

I can see that English is improving little by little in Thailand, but it is still a great impediment to communication. I remember a time when many foreigners felt compelled to learn some Thai phrases to get by, at least the basics such as, “I love you but I can’t get married just now” and “If I get one more blood transfusion, do I get a discount?”
No one is put off by the language barrier, and many come for medical tourism, which I have never understood. Just getting my eye exam was fraught with communication difficulties. I need third and fourth opinions. 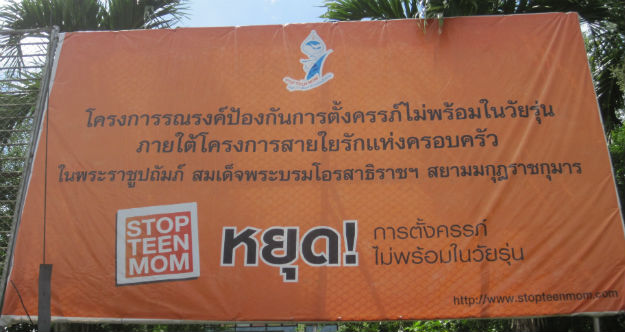 I flew to Krabi from Kuala Lumpur. As a quick aside, my last time in Kuala Lumpur I met a Ukrainian traveler who had almost no money. She was very breezy and unbothered about it; living in complete destitution was just her way of traveling. She had slept rough in New York’s Central Park and by London’s Buckingham Palace, hitchhiked through California, and her experience is that just when things look grim and she’s nearly broke, something great happens. It always works out in the end. She’s also a chain smoker; if she’s laying half-dead by the side of the highway, her last coins will go to cigarettes.
In Malaysia she lived on roti canai and when the money for that ran out, she merely went to the corner of a busy part of town and started asking people if they were Couchsurfers. She got a place to stay, then she went into a pub popular with foreigners and came out with a job. Later she found a landlord to rent from and got a temporary job from him doing “auditing and business consultation” for five days in Brunei despite having no idea what she was actually doing. The details are hazy to me, but I bring this up because this kind of traveler living off the seat of her pants is a dying breed. I also bring it up because she’s the poster girl for where there’s a will, there’s a way. You create your own luck. The last I heard from her she was was in Vietnam, sick and presumably penniless. Good times!
When I asked her what she missed most from being home and she said she missed end-of-summer get-togethers with old friends discussing what they did, what it meant to them, the meaning of their existence, etc. It was the most Eastern European of answers.

Krabi still has a backwater-ish feel as most people use it as a stepping stone to other places, but the airport is getting busy and there are even direct flights to Guangzhou now. Yes, the Chinese are already here in big numbers. I’m still amazed how Chinese tourism has gone from almost zero just five(?) years ago to ubiquity.
It’s fun to see each nationality carving out its own little niche in Thailand. Scandinavians are big around Krabi. One guest house had a sign: “We sell snus“. Last time I was down this way on little Koh Lanta island I noticed there were Alcoholics Anonymous meetings—in Swedish. 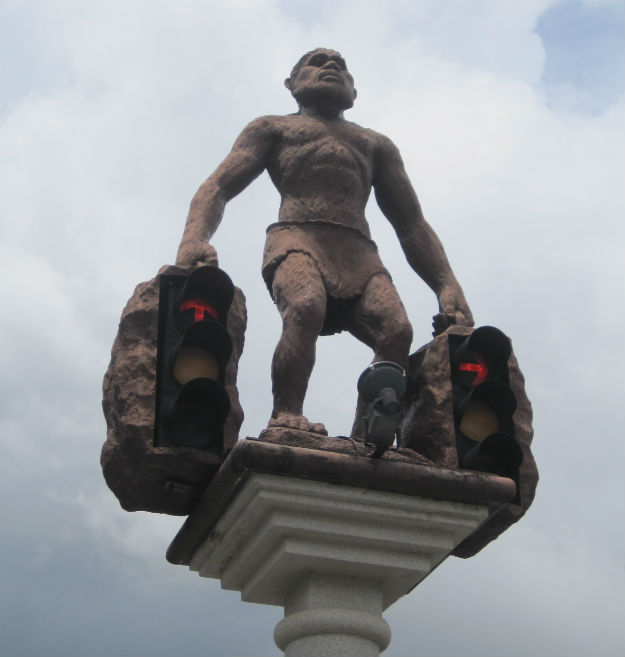 A stoplight in Krabi. 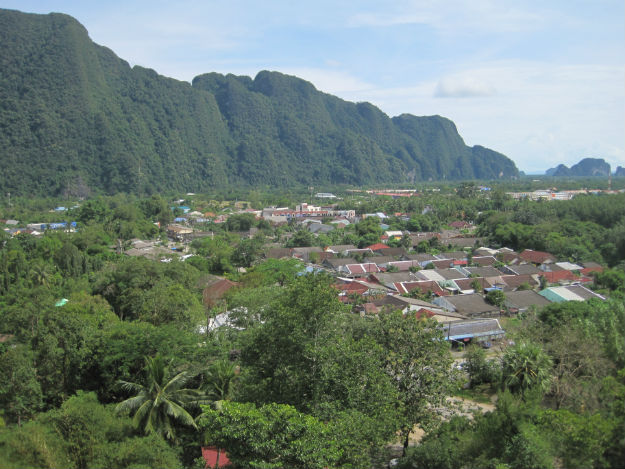 Phangnga is about halfway between Krabi and Phuket and is one of the places to come for tours of its exquisite bay, though no one does because no one wants to base themselves here. It is one of those nondescript but nicely-sized Thai towns where you can watch a takraw game, get normal (non-touristy) food everywhere, not be harassed by taxi and tour touts, the locals are extra friendly and, I dare say, even happy to see you. 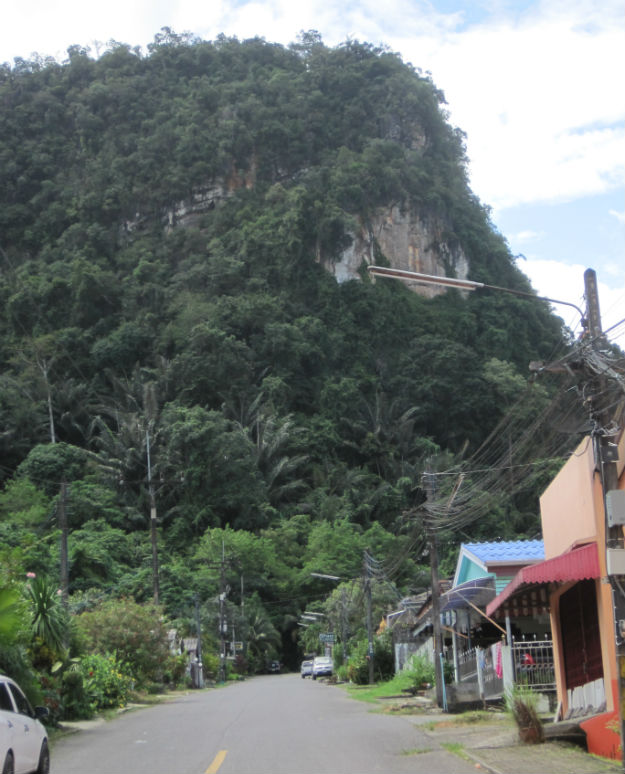 Limestone karst rock formations sprout up all along the coast. Big fan. 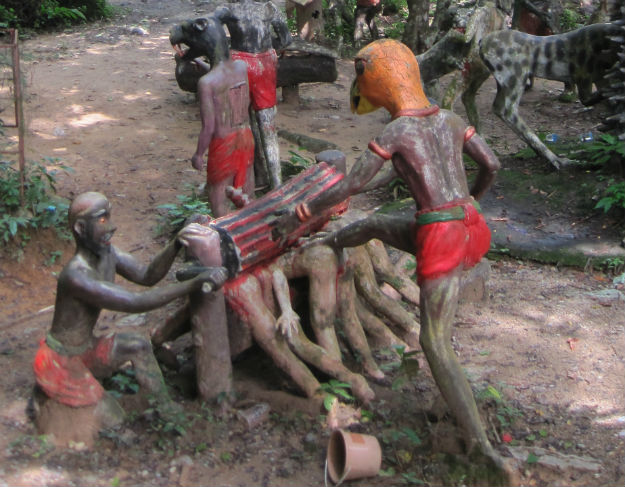 A charming little scene from the Heaven and Hell Temple: a bird(?) pushing humans into a grinder.

PRACTICAL INFORMATION:
I flew from Kuala Lumpur’s old, rarely used Subang Airport to Krabi, Thailand on a Malindo Air turboprop for US$68.
I must have looked at ten guest houses in Krabi. Almost all of them smelled of mold when I opened the door, which releases the suction deep into my nostrils. When you can smell the mold before you reach for the door knob, that’s a lot of mold. (One malodorous guest house had a radio station inside of it, which almost swayed me.) I ended up at the same place I stayed last time, the one with all the beautiful dark wood yet doesn’t reek, K Guest House. 200 baht (US$6) for a pokey room, bathroom separate.
In Phangnga I stayed at Phang-nga Guest House just north of the bus station on the main road for 350 baht. The Monday night market way in the southern part of town isn’t worth the effort to get there.
A discovery: when Thais show that something is funny on social media, instead of “lol”, they use “555” because the number five is pronounced “haa”. Clever.
Next up: into the belly of the beast, Phuket.
Why don’t you stay with me? You can follow along with RSS, subscribe to an email feed, see what’s cooking on Facebook, pray that I’ll say something worth remembering on Twitter and if you are really slumming it, there’s always Google+.