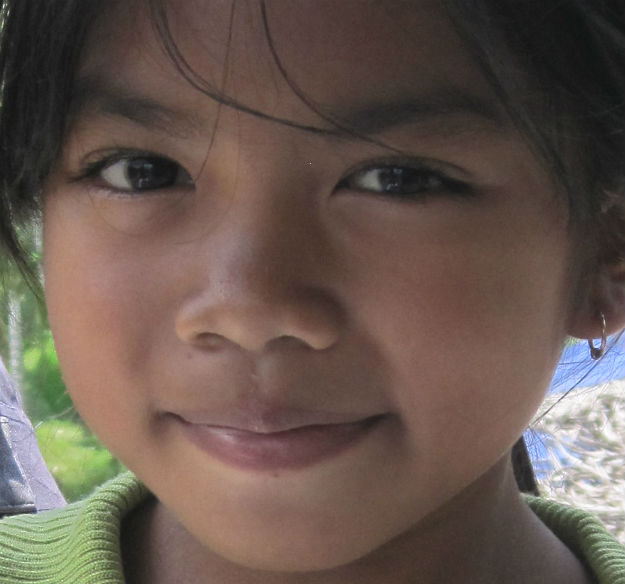 A face from the Tegallalang rice terraces. Lots of girls like this one try and sell postcards to tourists. Last time I took photos of a bunch of them, went down to Ubud to make prints, and returned to give the girls photos of themselves. The looks on their faces when they got them was worth all the world’s gold.

So I was looking for a place to sleep in Sanur on the east coast. There is one backpackers hostel, but it ruffled my feathers when I read on their website, “PLEASE UNDERSTAND WE HAVE AN AGE LIMIT OF 35 years or younger IN THE DORM ROOMS.”
Once in a while I see something like this and I always become agitated, probably more than I should be. I think I am less bothered by genocide. I am also confused about the problem. Are we boring? Do we snore disproportionately? Do our dentures keep slipping out and hitting the bunkmate below? (I’m really, really sorry, Mr. Norwegian! Won’t happen again!) Do we sit all day in the common areas and yell at everyone who will listen that it was all better in the good old days? Do we turn off the lights at 10pm and grumble if anyone turns them on? I decided to politely write the hostel:
Me: Hi, I was wondering why backpackers over 35 aren’t allowed.
Jackass: “I don’t spend a lot of time asking ‘WHY?’ Instead I focus on what I should do now”
Jeff Dixon-The Key To The Kingdom
Me: That’s an answer? I should instead focus on trying to be under 35?
Jackass: How old are you?
Me: Too old. I am curious what it is about over-35s that you have that policy.
Jackass: Why would an old man want to share a room with young 18yr old girls?
Why can’t we smoke in Restaurants
Why do we have to wear a helmet on a motor bike
Why do we have to where seat belts
WHY WHY WHY
Me (biting my tongue): Are women over 35 allowed?
Jackass: No, I’m sorry thats just our rules, we have implemented them at the request of the majority of backpackers. We initially didn’t have this rule and on 2 occasions we had several complaints from our guests about older guests ogling at the young girls and one occasion where the girls felt unsafe. So to be fair the rules also apply to women. Hope u understand. There are however many other backpackers in Bali that allow older guests. Enjoy.

…and we’re going to need to check IDs.

I am amused by “young 18 yr old girls”. Are there “old 18 yr old girls?” He might be the one with the obsession. “On 2 occasions we had several complaints”? “The majority of backpackers”? I doubt this, and even if something did happen to one of his precious 18-year-old girls—adults—are they really threatened more by us drooling, senile oldsters than a 19-year-old boy, say? Jackass. 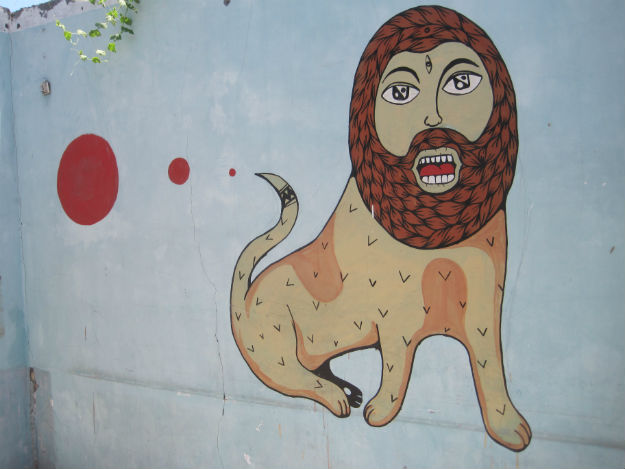 I was in the Sanur market, the only idiot in the midday heat shopping in the inferno of the enclosed space. No one was particularly interested in selling me anything they had displayed. Instead, as I walked around I heard, “Hello, massage? Special massage!” and “Special massage…Bali girl!” I bought some clothes from one stall and I asked the woman what was distinctive about a Balinese girl. As a non sequitur she said the girls are all from Java and that the pimp (i.e. everyone in the market) will take 500,000 rupiah ($40) but pay the girl only 200,000 or 300,000. 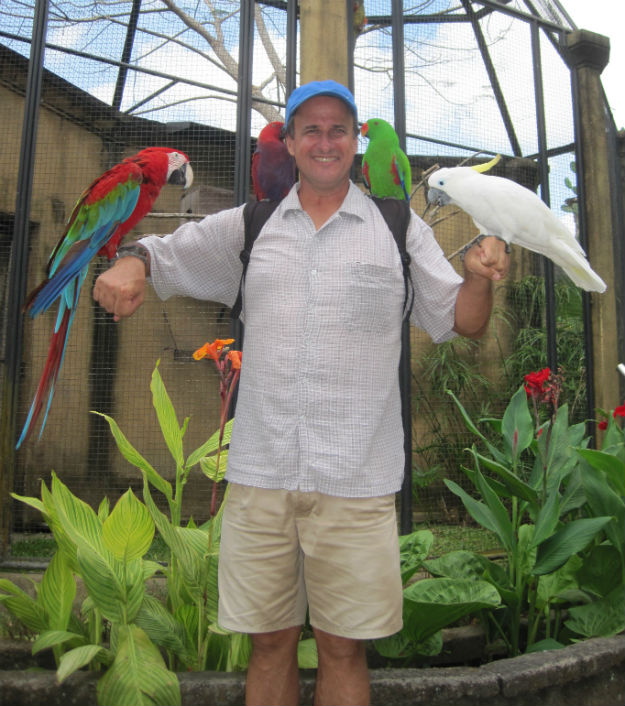 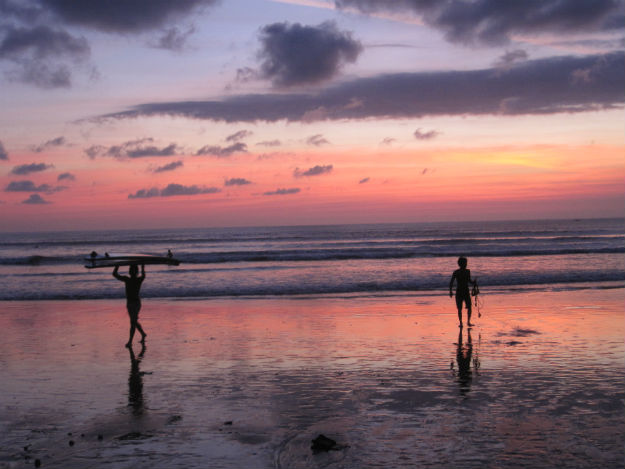 Sunset on Kuta Beach. It’s so beautiful in this direction but everything behind me is so ugly: masses of people, non-stop noise, endless shops crammed together, horrendous traffic, continual hassle, and darting motorbikes all in heavy, heavy overabundance. 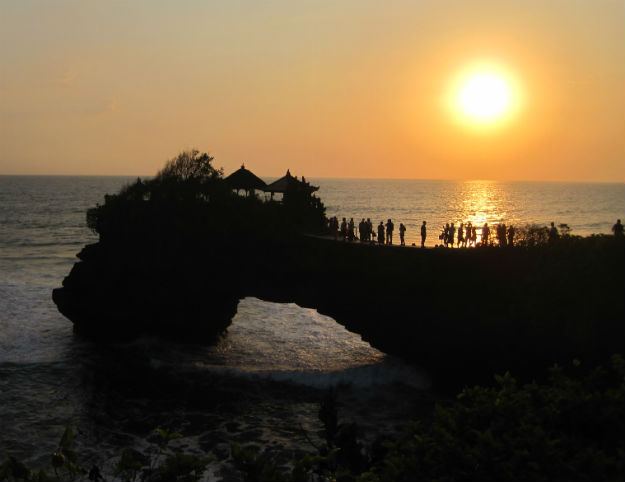 Tanah Lot, another photo where there are a zillion people off-camera. Absolute hordes of tourists go for the sunset. Traffic is so bad coming back that it took me two hours to go 21km.
What I will remember more from this day was that I was hitchhiking nearby when two chickens were crossing the road to get to the other side and a passing tourist van hit one of them. The dying chicken lay flailing in the middle of the road while the other ran circles around it in distress and then had to dart to the side of the road to avoid cars. The chicken had to wait, but when there was a moment, he ran back to the suffering one, scratching at it with one foot before scurrying off to the side of the road again. It was touching to watch. 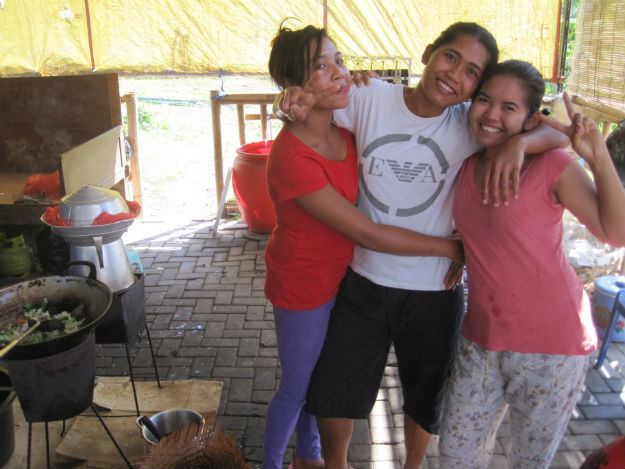 I was saying last month how accessible Penang felt, but Indonesia is even more open and inviting. I went to Tirtagangga on the northeast coast for no reason at all and these women working at a food stall let me hang out with them in the open kitchen, let me ask how they cook, what ingredients they use, their thoughts on monosodium glutamate, etc. It doesn’t sound like a big deal, but it’s a great feeling to have this freedom to get all my stupid questions answered. 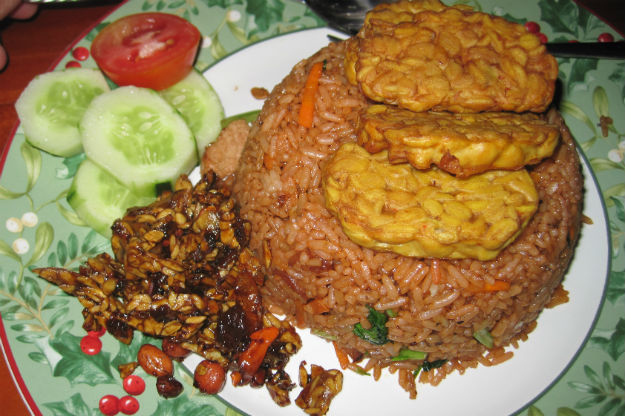 They make this fried rice for 25,000 rupiah (US$2.) Love the tempeh (fermented soy bean cake) on top and on the side. Tempeh is God’s gift to the world, and it’s a mystery to me why it hasn’t taken off in USA, especially when we grow so much of the world’s soybeans. 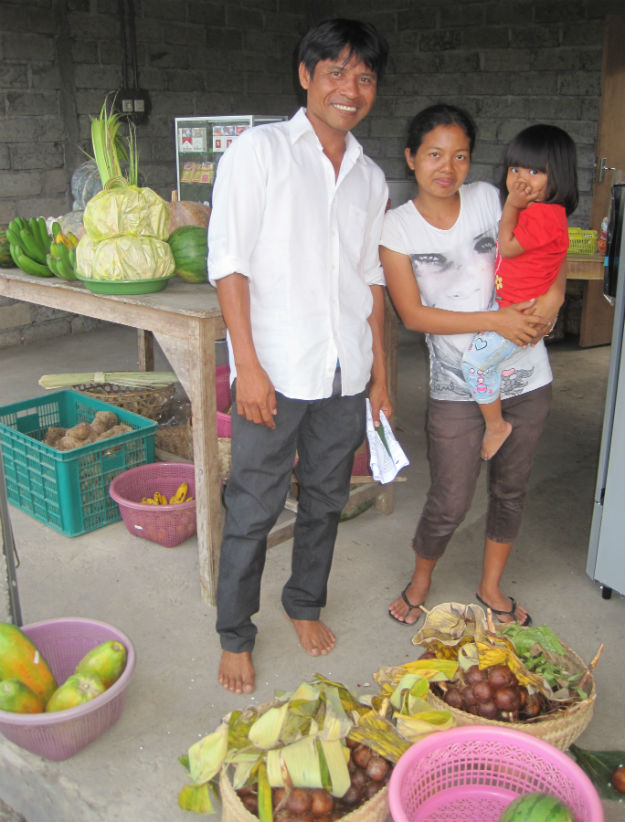 After my fried rice I went for a walk away from the village, following a religious procession that one always finds in Bali (A local told me, “It’s easy to be Muslim, all you do is pray five times a day. Being Hindu, much more difficult!”) and I stopped to buy some fruit at this family’s shop. The guy didn’t speak great English, but it didn’t stop him from passionately telling me that organic farming could change the whole community. The problem is that he had trouble convincing his fellow farmers, who blindly want the fastest harvest possible. 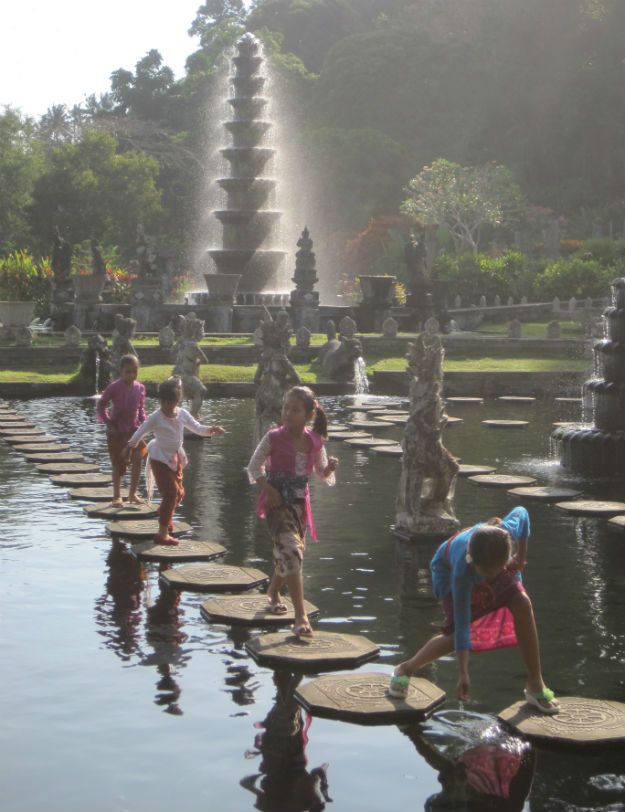 The Tirtagangga water palace, a relaxing place to beat the afternoon heat. I made small talk with a friendly couple from Shanghai on vacation, but when I asked them their opinion of what is happening in Hong Kong, they suddenly went stiff. I killed the moment.

PRACTICAL INFORMATION:
I flew on Malindo Airlines from Kuala Lumpur to Bali for US$68 one way and $60 coming back with one free checked bag. Not bad for a three-hour flight. AirAsia was similar, but you have to pay for bags and I tire of AirAsia’s heavy-handedness such as when they announce that you can’t eat your own food on the flight and where they slyly try to help you forget to opt out of insurance and seat reservations.
Visa on arrival is now $35. The international departure tax everyone must pay at the airport (if you are not flying Garuda Indonesia) is now 200,000 rupiah (US$16.50).
I met an Aussie guy who came through immigration quickly even though several flights had arrived at the same time. He was just as surprised, but he said a security officer sidled up to him when he was filling out his arrival form and asked if he wanted “express service”, promising he would go right through for 300,000 rupiah (US$25.) He said sure, the security guy took his passport to get stamped, and he buzzed right through.
Just so you know, there is no such thing as express service. Likewise, when I saw a friend off at the airport, the security guard on the outside of departures whispered to me that I could go inside for $10. My first time to Indonesia I bribed a Bali immigration guy $10 to let me into the country without an onward ticket. (That’s how you know it was a long time ago; it only took $10.)
Last time I was here I wrote a quick guide to Ubud on $10 a day that was well-received by my fellow bottom feeders. Two changes from that: they fenced up the Monkey Forest Park so you can’t sneak in and a good tip is to check out the Ubud market before dawn to see it busier than at any time during the day. Also, there is something resembling mass transit in the Kuta area now with the Kura Kura bus. Together with the Sarbagita bus, it’s a step, a small one.
I finally stayed at a Tune Hotel my last night in Kuta. It’s a real hotel that can be had at a hostel price if you book it on the right day at the right time. It’s well worth checking out, but wifi is unnecessarily expensive and you don’t need to buy air con since there is a fan.
Hitchhiking
It’s irresponsible to hitchhike in Bali on busy roads by simply throwing your thumb out. The problem is no one is expecting to see a hitchhiker and they stop impulsively without thinking of traffic behind or beside them. I learned that the hard way by almost causing several accidents. I instead picked my spots by extending the thumb only when it was safe for a car to stop.
Distances are short, but traffic and roads make any traveling time-consuming. Still, it’s fun, and the people are great. A few foreigners pick me up, too. A Belgian woman who had been a diving instructor years ago took me. I said I know a Hungarian diving instructor. “Viki?” she asked. Yes. 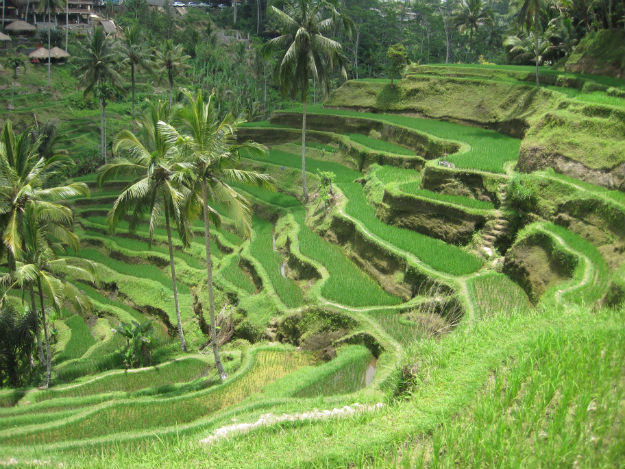 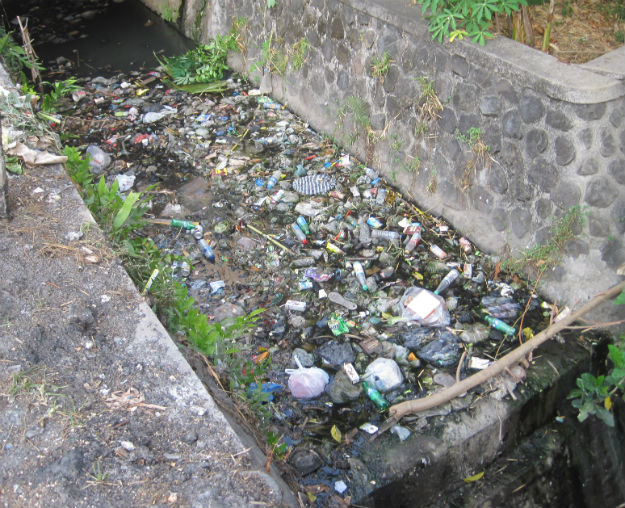 A common sight in Bali.