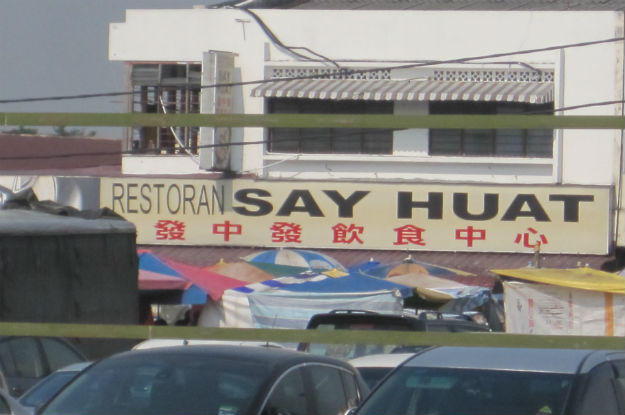 Another visit to Malaysia in the books. I accomplished nothing I intended to (go somewhere new, see inexpensive doctors for a checkup, check my skin post-chicken pox, etc.) but I’m less bothered than I should be about it. I’m also 300kg now. It was time to go before I ate myself into Bolivia, as Mike Tyson might say. 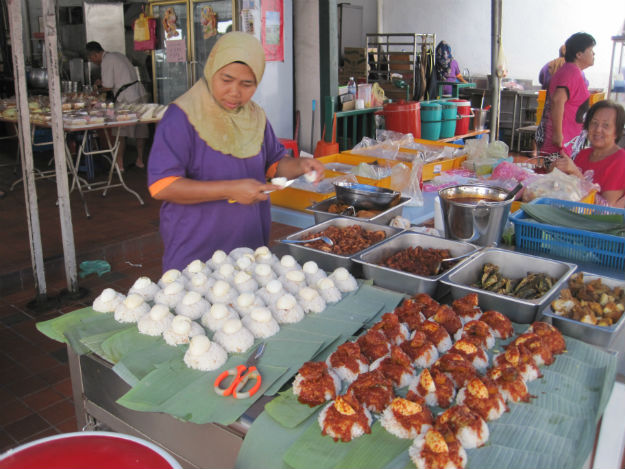 Preparing what is arguably the national Malay dish, nasi lemak, literally “fat rice”, that is quite cheap. It’s not enough to say there is Malay, Indian and Chinese food here. There are sub-categories and a broad mixing of cultures, such as nasi kandar which is predominantly Tamil-Muslim food, a simple rice and meat dish that is smothered in a variety of rich curries. Nyonya/Peranakan cuisine is from the intermarriage between Chinese and Malaysians, Chinese spices making subtle changes to Malay/Indonesian dishes. In Malaysia there’s probably a cuisine inspired by the third uncle of one-legged Portuguese who hail from southwest Mongolia. 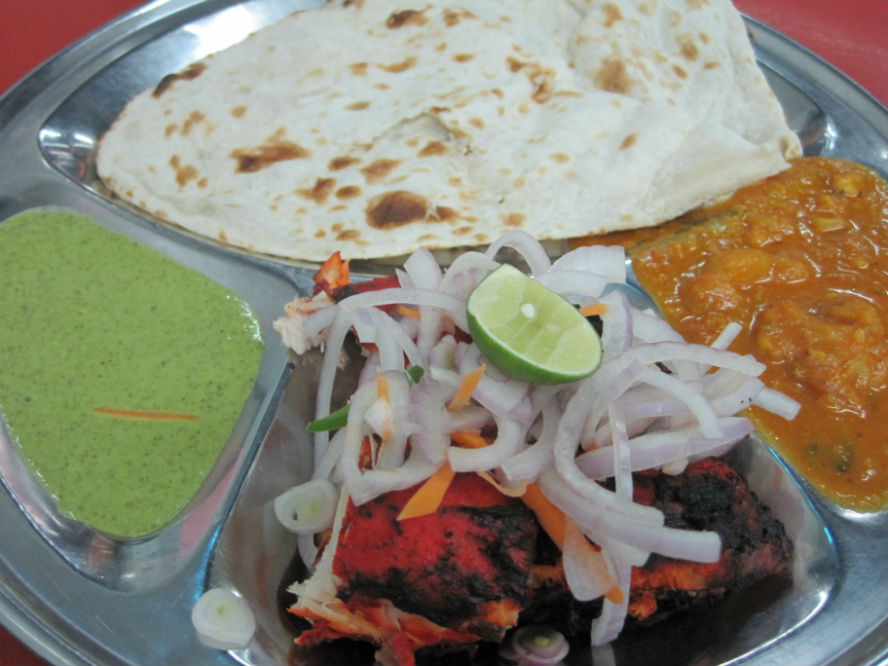 In some circles this tandoori chicken and nan set is called flavoursome. It reminds me that every time I leave Malaysia before I get the definitive answer to this burning question: is ghee the devil? (I say yes.) This cost nine ringgit, or about US$2.75. Malaysia is very good value for money, but it’s poor form to say that it’s cheap in front of Malaysians when local wages are so low.
This was at Sri Ananda Bahvan restaurant in Penang. The food is excellent, but I find my favorite part of going there is when a tall, lithe, dark-skinned Tamil girl with long, shimmering black hair and bewitching eyes, all improbable elegance amidst the din of Little India, lopes in like a gazelle, and all the guys working there, which seems like dozens since workers cost three cents to import from India and Nepal, manage to get a short but solid stare in like they have never seen a woman before. 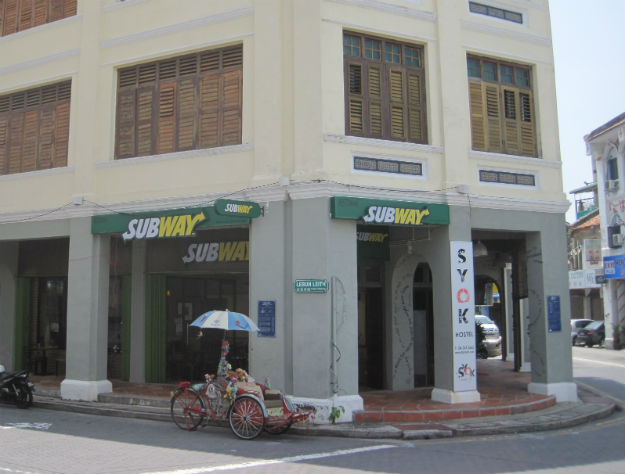 Subway has opened ominously close to the World Heritage zone in Penang at the end of Lebuh Chulia. I’m heartened that I have never seen it busy. It saves me from not giving foreigners the stinkeye when I walk by. Yes, we westerners can get tired of Asian food after a while on the road, but out of respect can’t we all wait until we get to Kuala Lumpur or Hat Yai, please? Thank you. 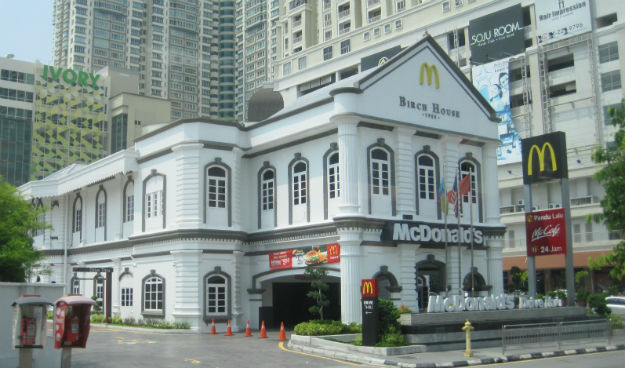 This is even more ominous, that the deep pockets of McDonald’s have been able to renovate historic buildings for their own use. Or, should we rejoice that they are being renovated at all? Is the trade-off worth it? 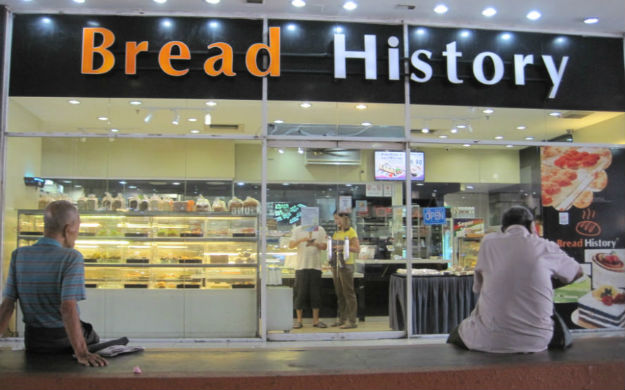 Cutesy names aside, stay far away from western food in Malaysia. 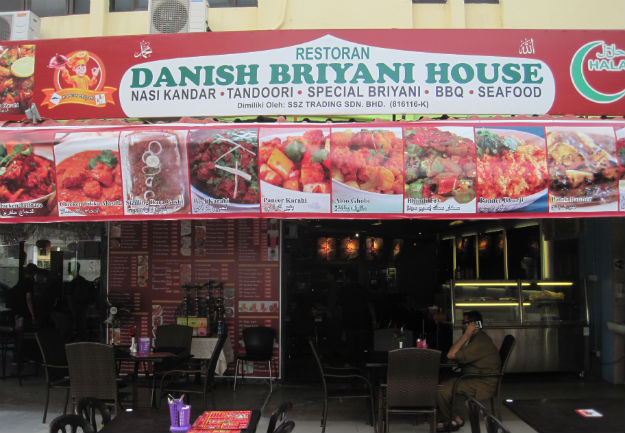 I don’t know what Danish briyani is, but there is a finite amount of meals you will eat in Malaysia and they are too precious to be used for experimenting. 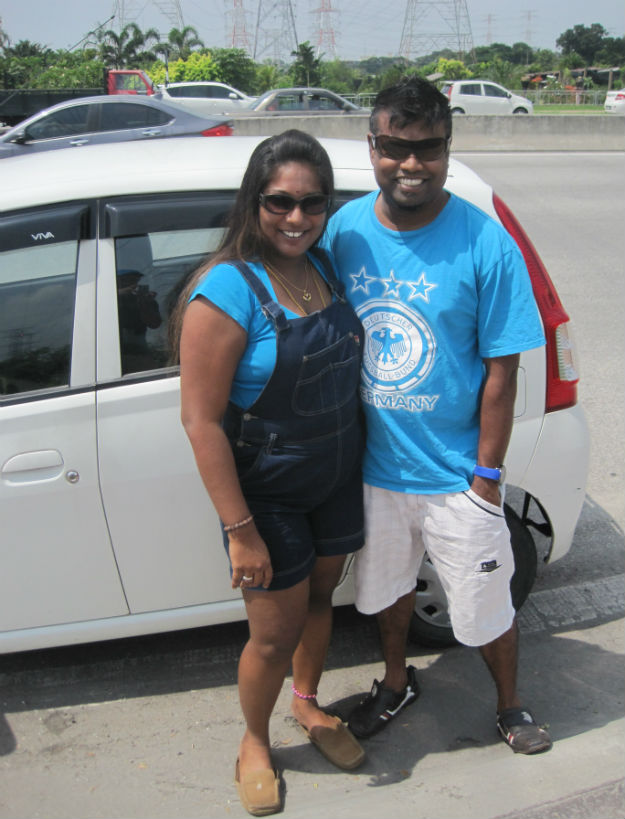 Hitchhiking from Penang to Kuala Lumpur was easy. I took the ferry to Butterworth where I very quickly got a ride with two Tamil women and then this Tamil couple drove me out to near the highway. The key to hitching in Malaysia is to go from big kawasan rehat (rest area) to big kawasan rehat—also known as “R&R”s with excellent facilities: one or two gas stations, a good-sized food court, and sometimes a hotel or a Starbucks. 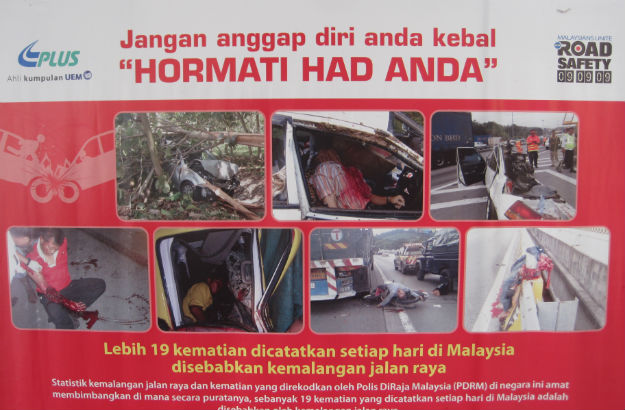 Malaysian police loves making posters and banners of gruesome photos of accidents to try and scare drivers to go more safely. I accept your gratitude for not having a more close-up photo, especially the lower right one—unless you want to see it, then click here. It’s really bad, I’m warning you. 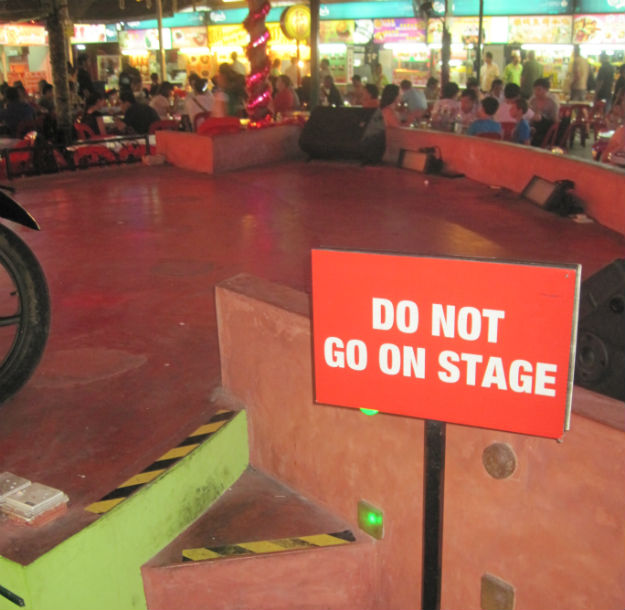 If you tried to put up this sign in the Philippines and karaoke was involved, you would start a riot.

I don’t have photos of:
—The thief who burst out of a cell phone shop followed by two guys in hot pursuit, so hot that they caught up to him ten meters away, the thief was so slow and clumsy.
—Someone dozing in their car with the engine running in order for the air conditioner to work, a popular pastime, global warming be damned.

Practical information:
I drank tap water for days until enough people told me not to. My last morning in Malaysia on my way to the airport something hit me from whatever it was I ate or drank the night before, which could have been anything.
The Penang tourist office is putting out some quality heritage-related maps and information. In one they profile individual craftsmen who do one thing and only one thing like making joss sticks, rattan furniture, traditional lanterns or even just the old Chinese guy who makes 300 coconut tarts every morning, then stops, and that’s it. You walk on over, there is the guy’s store and there he is, like how life is supposed to be.
They give the same treatment to the itinerant food hawkers. I read about the coconut and peanut sesame ball family, found their usual location where they set up most evenings, and there they were. I like my Penang to be a time capsule where nothing changes.
Why don’t you stay with me? You can follow along with RSS, subscribe to an email feed, see what’s cooking on Facebook, pray that I’ll say something worth remembering on Twitter and if you are really slumming it, there’s always Google+. (I’ll follow you back!)