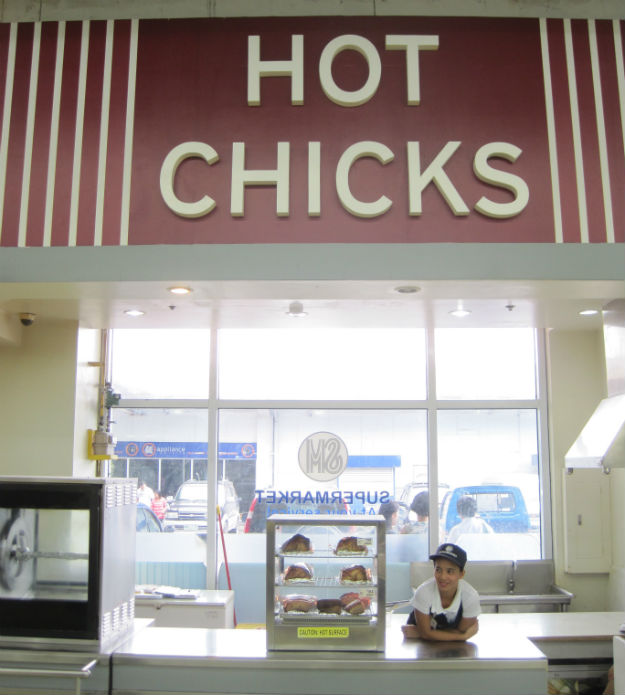 This is my fifth time in Philippines. (Is it Philippines or “the Philippines”? It’s a mystery on the same level as why jeepney drivers sit to the right of the steering wheel and why you seldom see fresh coconuts sold on the street. Anyway, my last time was wasted mostly in Manila because I saw a dentist there and forgot I was arriving before Easter, which is the busiest time of year; it was a huge mess. The Pope is coming to (the) Philippines next week and he is making the same mistake: spending too much time in Manila and not enough in the provinces. Unless he’s getting dental work done, he needs to fire his advisers. I’m available.
This time I made sure to fly out as soon as I got into Manila. I bought a one-way, $54 Cebu Pacific Air ticket to fly southward one hour to Bacolod for no reason at all with the vague plan to see Negros and Panay islands and make it up as I go along, which is all I ever do anyway. 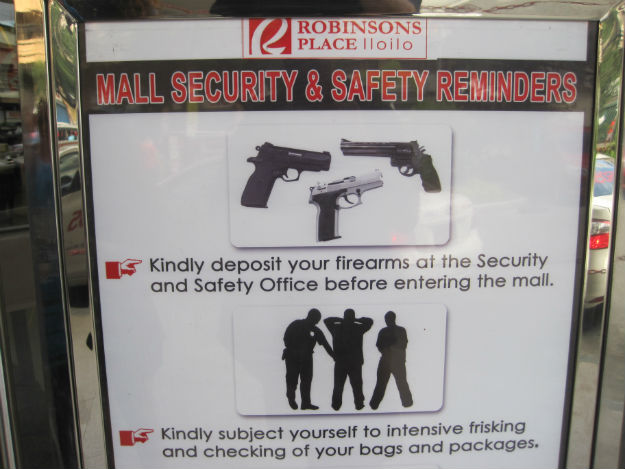 “Hi, I just came for the intensive frisking. Do you mind if I go in a circle all afternoon?”

At Manila airport I asked a security guard if I could bring my water bottle through, and he said sure, as long as I would drink from it after passing through the metal detector, but by then, in our small talk, he forgot about it. Instead, he was fixated on me traveling alone, peppering me with questions about why I wouldn’t be with somebody. I hear it all the time. Five times in Philippines gets you used to that.
I could be dragging a surface-to-air missile through an airport metal detector with “Abu Sayyaf” written on the side and a Filipino security guard will always be more interested as to why I am traveling alone. “Sir, where is your companion? Why only one? No family?”
Throughout the terminal, on every single TV, what was broadcast was not CNN or some nature channel highlighting the beauty of the country, rather it was the Sacramento/Minnesota NBA game. That’s a serious love of basketball. You couldn’t pay an American to watch a matchup of those two teams, but in the airport I saw many in rapt attention. All over the country you find NBA games live on TV in the morning and repeated for evening prime time viewing. It’s great.
If an NBA team were smart, they would sign a Filipino point guard. The team would instantly be the toast of the country, sell 96 million t-shirts and have a nation under its spell. If I’m not too busy advising the Pope on his travel plans, I’d happily be the consigliere to the NBA in my free time. 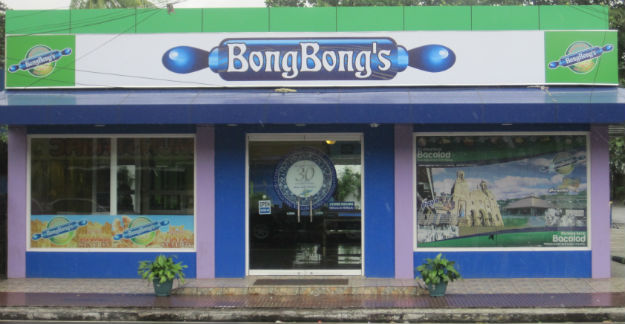 I had imagined Bacolod would be an atmospheric, provincial backwater and I read rumors that it is a foodie town, which Philippines needs a thousand more of, but I never got a solid impression. It rained the entire time and the Bacolod Pension House, already heavy on the scruff, was making me crazy with 3am parties, so I only stayed two wet nights.
Bacolod is renowned for chicken inasal (grilled chicken in a marinade of spices) and piaya (a kind of thin pancake with a sweet molasses filling). They’re both great, but not exactly enough to risk my life getting here. 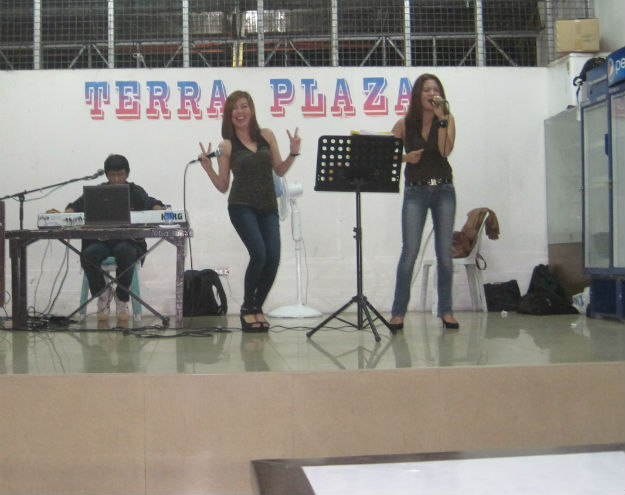 Filipinos are mad about music. Any way I express this will be severely understating it. What country doesn’t like singing and dancing? But, no, you don’t understand, it’s different here. It’s their oxygen. At this humdrum, nearly empty food court in Bacolod I saw these two talented girls. Even the humble keyboardist broke out a very strong, “Bridge Over Troubled Water.”

I took a 225 peso ($5), 75 minute ferry boat west to Iloilo on the island of Panay, which is a step up in charm, but I found it only so-so. The foul-smelling, noisy abundance of jeepneys doesn’t help its ambience, but my anti-jeepney screed is for another time.
I have only found my Filipino groove in the place I just arrived, nearby Guimaras island, but that’s next blog post. Let me soak it in a while. I already have a title: “Guimaras: everything right about the Philippines.”

A sign on a travel agency. What do Filipinos do with this information? What do they think when they see they can stay 90 days in Zambia? I’m confused. 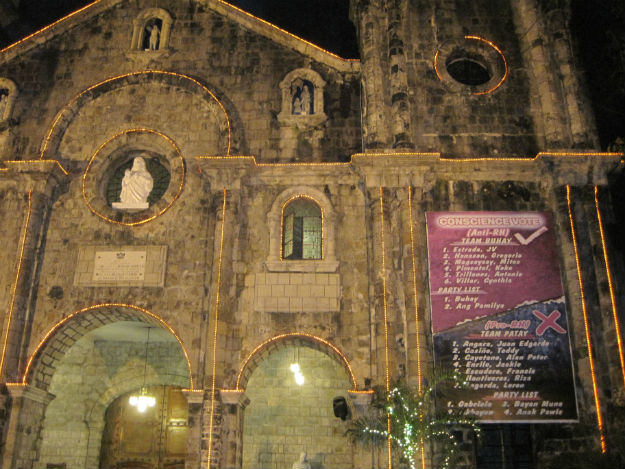 Talk about the intersection of church and state. I can’t recall ever seeing a church using it’s building as a giant billboard for political advertising. It’s a shame. This is the story behind it.

PRACTICAL INFORMATION:
Low-end accommodation in Philippines is rough on the soul, but you get what you pay for. I checked at least a dozen cheap hotels and pensions in Silay, Bacolod, and Iloilo, and not one challenged my belief that travel is evil. We all really need to stop traveling.
Ong Bun Pension House with branches in Bacolod and Iloilo reined me in with their website, but websites not named TheDromomaniac.com can sometimes lie. It seemed that in this case, three seconds after it was finished being built/renovated, they quickly took all the photos for the website, because the reality is something different. Both branches attract traffic because they’re the cheapest places around and have rooms starting at just 150 pesos (US$3.30) for a fan single.
The Bacolod Ong Bun was one of the first places I saw right off the plane in a daze from my five flights to get there. At 2pm I was at the reception when a fresh-faced happy young couple were checking out. I turned to the girl and asked, “Oh, is it that kind of hotel?” She gave a wry, Mona Lisa smile, not wanting to lie, but not eager to start a conversation about it. I found the place super sad but then realized a dozen pensions later that it is standard and I simply have to acclimate myself.
Even so, the Iloilo Ong Bun is more asylum than hotel. It has a location and price that can’t be beat, so it fills up every afternoon with rowdy groups of locals. It’s a madhouse with wretched bathrooms—“comfort rooms” or “C.R.” they’re called—to match. 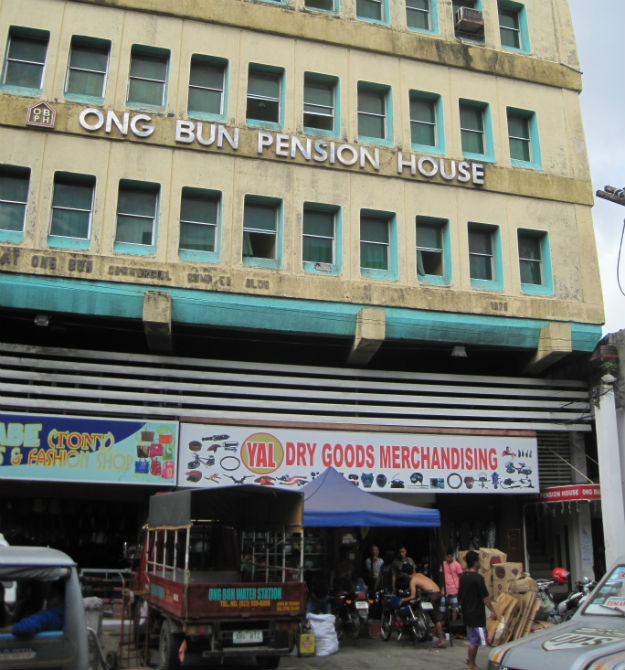 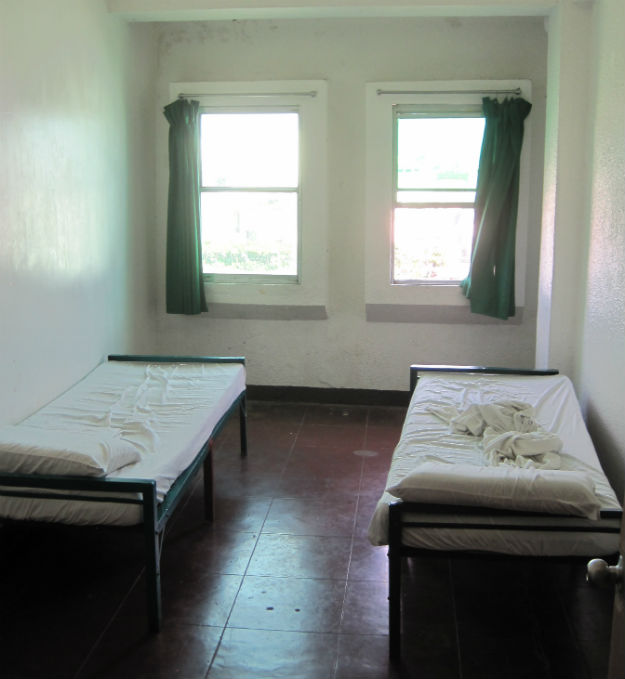