I had the worst or second worst flight of my life. Right up there is flying with hundreds of distressed Ethiopian maids in fits of hysteria from Bahrain to Addis Ababa, but at least that plane was functioning correctly. In this case, an engine blew in the middle of the Pacific Ocean. Allow me to tell the journey chronologically because I know everyone wants to hear about Honolulu airport’s bathrooms, too.
Earlier this week I impulsively bought a one-way ticket to Manila on United Airlines leaving on New Year’s Eve for $558. (I know, I know, I’m not happy about it either.) I would actually be missing New Year’s Eve because I was flying over the International Date Line before midnight, not that I had anyone to celebrate with me anyway. (I know, I know, I’m not happy about it either.) It was a crusher of a flight: San Francisco-Honolulu-Guam-Manila, 20+ hours, plus a Philippine domestic flight seven hours afterward. 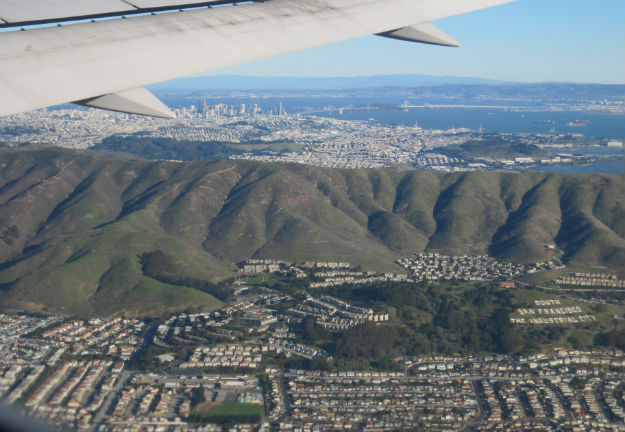 View of good old San Francisco after liftoff. Why did I leave again?

The wonderfully outdated Honolulu airport is something to behold. No screens inside the terminal telling you what gate your flight is, no wifi, few amenities, just some old dark wooden native designs on the walls. Walking into one of the antiquated bathrooms with the ravaged tile floor made me nostalgic for my elementary school. It’s as if the Hawaiians are saying, “Look, we just don’t care about the airport. It serves its purpose. We’ll just have a few shops and we’re cool with it looking like a rundown 1970’s tiki bar.”
I was impressed by Hawai’i’i’i’i from the air even though I saw only the humdrum approach over Kailua and around Honolulu. It was striking to see the stark, craggy mountains and glossy-photo-mag-perfect sea. Throw in the beautiful people working at the airport and their pretty smiles and pleasant disposition and it has whet my appetite for returning.
I had the opposite experience the last time I had a stopover in Honolulu, also on a one-way ticket to Manila (where a man on the flight, after I told him it would be my first time to the Philippines, shouted for half the plane to hear, “SO YOU’RE A VIRGIN TO THE PHILIPPINES? YOU ARE GOING TO LOOOVE THE LADIES!!!) For some reason, maybe it was my loud, primary-color clothes, I was taken out from the transit area and through a set of unmarked doors. I was instructed to lean against the wall to be searched in a hallway next to an unused open elevator, mafia style. It was never explained to me what I might have done. 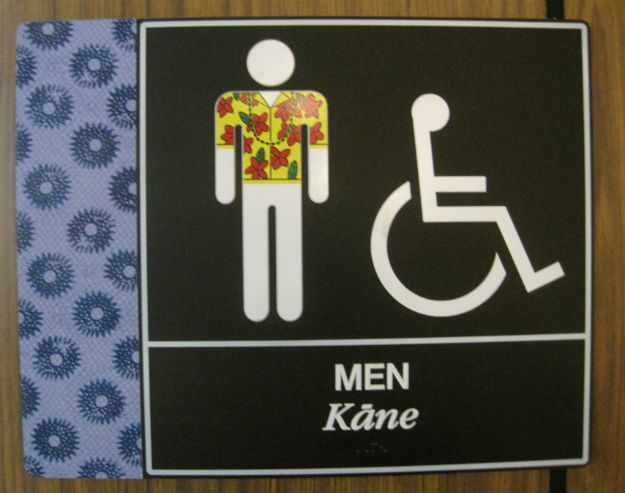 The flight was late in arriving to Guam so we all made a race of it for the connecting flight to Manila. Everyone was pretty spent at this point so they kept the lights off in the aircraft to allow an attempt at sleeping. I hadn’t bothered looking out the window, but I heard a small commotion and saw this:

This isn’t what you want to see in the middle of the night. I had dozed and wasn’t sure how far we were from land, but I knew we were screwed if we were going down. A flight attendant came by and she craned her neck over me to see the flames—those are flames, right?—whereupon she quickly phoned the cockpit.
After a very unnerving 10 or 15 minutes where one wonders about the meaning of life and what unfinished business there is, the captain announced that there was a problem with the engine and we were returning to Guam, which would take about an hour and 20 minutes. He warned us that that he was about to shut off the bad engine and I guess there are balance issues, so it was an amazing bit of skill that the pilot turned the plane 180 degrees without me noticing it.

Guam to Manila is 3.5 hours; when you are 80 minutes west of Guam and at least a good hour from Yap Islands, that’s remote. (I once sold a Yap license plate that I bought at a Berlin flea market on ebay for only $12. What is wrong with people these days?)

When we got on the next aircraft with the same crew, I overheard a flight attendant telling a passenger that in seventeen years of flying, she had never encountered anything like it. Then, once underway, the pilot got on the intercom and in that very practiced, breezy way they speak, said that in fifteen years of flying, he had never encountered anything like it.
But the drama wasn’t over, oh no. Soon after liftoff, a teenage girl sitting across the aisle from me had a seizure. I couldn’t tell if this was a regular occurrence as her parents grew increasingly flustered and a flight attendant had to get on the intercom to ask if there was a doctor on board. She was carried to the back row for the rest of the flight. I saw her in a wheelchair later in the terminal looking dazed, but OK.

I spent over an hour trying to get United staff in Guam and Manila to do something about my next flight that I had missed. I thought I had planned perfectly for by scheduling it seven hours after my arrival in Manila, but my arrival was exactly seven hours late. United’s supervisors could only suggest I send an email to complain—the black hole—but I squeezed this letter out of them. I like the tone of the last sentence: we don’t know why we’re doing this, but if it gets him off our backs, then we’re OK with it.
Cebu Pacific Air is an ultra-low cost, don’t-come-crying-to-us-about-your-missed-flight airline, and yet the girl at the counter merely looked at the old reservation and put me on the next flight out to Bacolod without a word. Long live Cebu Pacific! 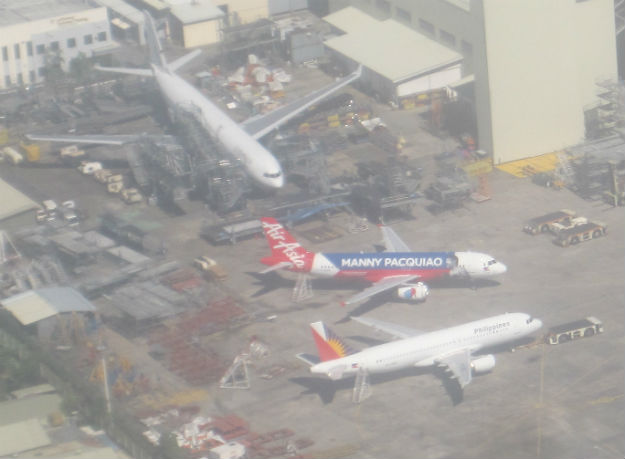 View of Manila Airport and an AirAsia Manny Pacquiao plane on my fifth flight of the journey, an hour south to Bacolod. Five days before, an AirAsia flight had crashed, killing everyone, and three days before, another AirAsia jet overran the runway on Panay, the island I am on now. On my flight it was rainy and windy and the pilot seemed to not want to take any chances, landing 3cm after the start of the runway.

I thought the doomed flight would be a big news story in light of the other bad flight news from Southeast Asia, but only the Guam press seemed interested. United put out a statement saying, “After take-off our flight crew reported engine vibration and an illuminated oil filter bypass light prompting our precautionary return to Guam.” No one wants to say the f-word—fire.

Two quick random rants:
How can San Francisco’s BART metro trains look so shabby? Have they not once been renovated since the 70’s? All the wealth in the Bay Area and it’s embarrassing how tired and scruffy they look. Cairo metro has better looking trains.
United thinks it’s cool to fly 5.5 hours to Hawaii and 7.5 hours to Guam and not serve you food—or, I should say in airline parlance, they give you the option to purchase food. I planned ahead, buying a small mountain of sandwiches for the trip from a Subway shop run my two Filipinos from Iloilo (where I am writing this now) but come on.
I am for Guam’s independence just so United is compelled to serve food on the international flight. On the second go-round to Manila, United didn’t serve food at all, just a golf ball-sized old muffin. In Guam airport while we were waiting for the new aircraft they brought out a few dozen snacks and drinks, not enough for even half the 164 passengers. Bush league. However, it is noteworthy that I was the only one stirred up about it, it appeared. Other than one man upset about something with his ticket, I was struck by the fact that I didn’t see one Filipino visibly bothered by our predicament and they calmly waited it out. Kudos to them. If it was a plane full of Americans, it would have been ugly.

Update: United has offered to give me a $150 certificate for a future flight or 7500 frequent flyer miles. Both had conditions that confused me; I went with the $150.

PRACTICAL INFORMATION
I couldn’t check in for my flight online because I had booked a one-way ticket and read that I had to show an onward ticket. I dutifully invented one, as I do, but at the airport the United agent only cared about knowing what date I intended to leave Philippines in order to enter it at the kiosk. She didn’t care to see it. I don’t know if it was related to my telling her that she looked like Zoe Saldana and she exclaiming that it was her favorite actress, but someone more Rico Suave than me can maybe work it better to distract the agent, who really doesn’t care and is just following protocol.
Philippines immigration in Manila also asked for the date of my departure without wanting to see the ticket. In their case I think they just want to hear that it will be less than 30 days since that’s how long the visa on arrival is.
When booking seats online take the best seat you can at the time and then log in again closer to your flight and you might be surprised how many seats free up. I managed to arrange it so I sat without someone next to me for the first three flights.
The lesson of the day is that we should never fly. We should hardly travel. Live locally. Don’t go anywhere where it involves more than a couple hours of driving, or better, hitchhiking. Accordingly, we should have no long-distance friends. That’s the lesson. I should have negotiated with United for one last flight back to Hawai’i’i’i’i and never leave.
As it is, this is probably the beginning of the 29th straight year where I am traveling for over six months, which fills me with embarrassment much more than pride. Let’s hope that the first day of the year/trip is the worst day of the year/trip.
Why don’t you stay with me? You can follow along with RSS, subscribe to an email feed, see what’s cooking on Facebook, pray that I’ll say something worth remembering on Twitter and if you are really slumming it, there’s always Google+. (I’ll follow you back!)