Hello from Jordan! This is my third time here. My last visit was four years ago when I spent a week here and then a month in Syria just before it all went to hell. Almost nothing in Amman has changed that I can see. 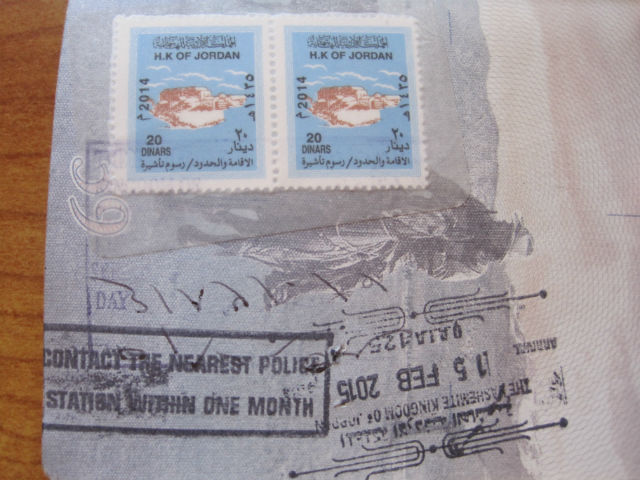 40 Jordanian dinars (US$54) for a visa. 120 dinars (US$162) for a multiple entry visa. You wouldn’t believe what it costs to visit Petra. Jordan isn’t serious about developing tourism.

I had a funny experience with the police. As you can see above, I am supposed to contact the nearest police station within one month, which I dutifully did because I’m a role model for kids. The guys at the front desk didn’t understand why, so I was sent upstairs to someone superior.
There was no one around upstairs so I walked around until I saw a meeting and poked my head in, interrupting a group of seven or eight policemen in high spirits about something. They broke up and gathered around to see what I wanted. An officer who spoke English set his glass of tea on the ground to look at my passport. He didn’t understand why I was obliged to stop by either. He asked if I was going to stay in Jordan longer than a month. I said no, and he insisted it wasn’t anything to worry about.
Someone asked where I was from and I said “America,” and then there was another question, and I realized it wasn’t another policeman in the group talking to me, it was a guy behind them who was locked up in a cell who somehow spoke the best English. I answered his questions, but was consumed by how medieval the cell looked, just a thick sheet of metal with very small holes, the cell not much bigger than he was.
I asked an officer who the guy was and he said he was in for being drunk. Another officer motioned that I could join him in the cell, which everyone thought was funny. They were all in a good mood, the prisoner included. I asked the officer if he was sure that the drunk guy wasn’t Daesh (the name the Muslim world gives to the Islamic State/ISIS.) which amused them. “No! No! A little much to drink,” the officer assured me. Good times all around.
All visits to police stations and prisons are memorable, and if you can get a holding cell inside a police station, even better. I remember Moldova in this way. 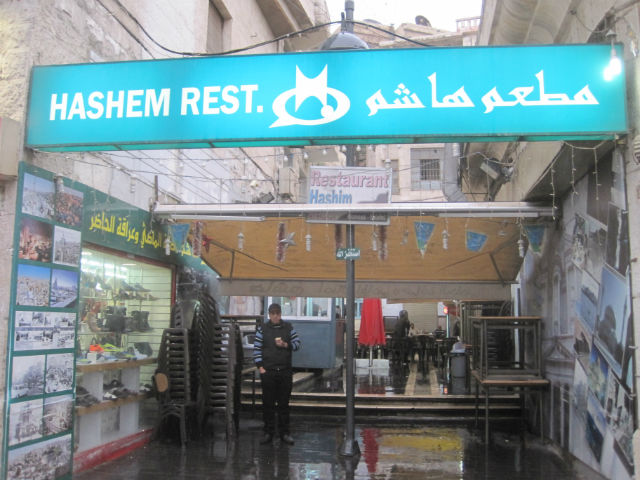 An emotional return to Al Hashem Restaurant, one of my favorites in this cruel and harsh world. It’s a hole-in-the-wall vegetarian place with a small, simple menu. 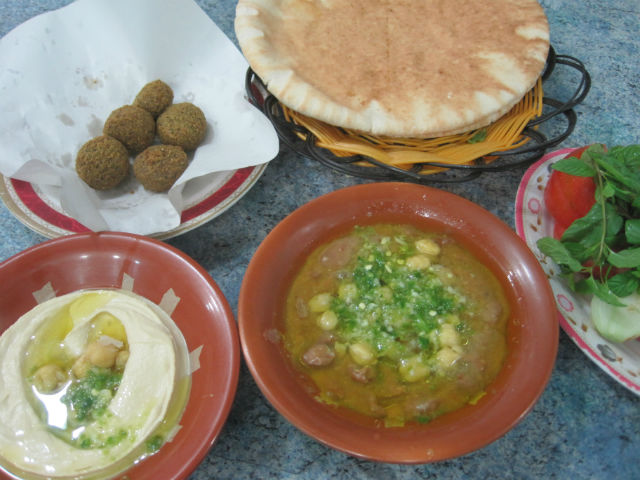 Now this is good eatin’! Three dinars for what amounts to the entire menu: hummus, falafel, fuul, bread, tomatoes and tea, which is US$4.20. 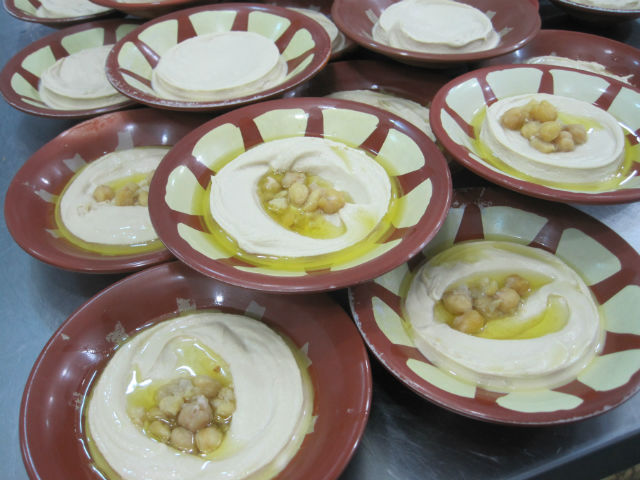 Some Al Hashem hummus. I do have one criticism: they could use less oil and a finer quality oil. 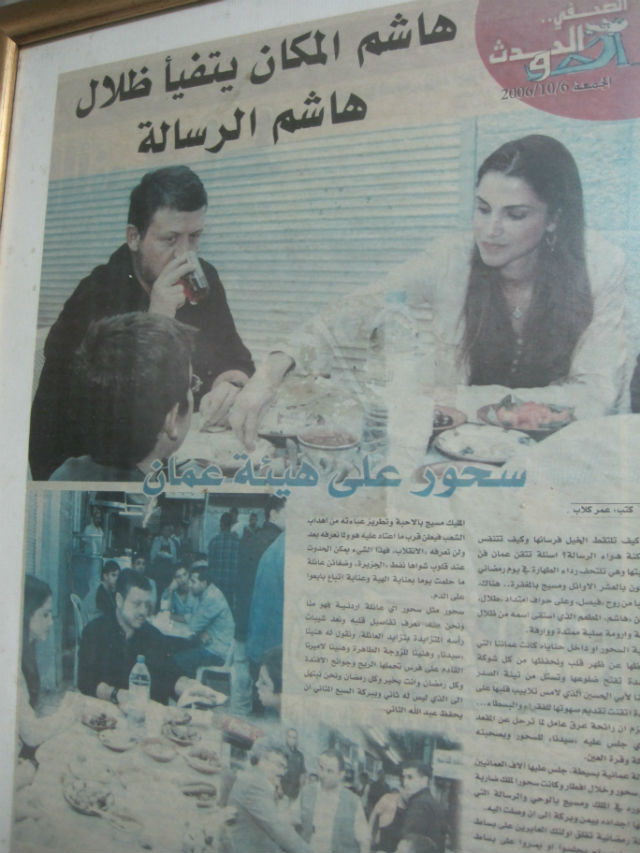 A 2006 newspaper picture of King Abdullah demonstrating that he is a man of the people by eating at Al Hashem outside next to the street, something unthinkable now that Daesh is after him.

The other major food in Jordan is shawarma, and on my first visit I saw the biggest shawarma I had ever seen, so ginormous that men on full-size ladders were putting more and more meat on it until it was the size of me. When I returned years later, I made a pilgrimage to it, but times had changed. 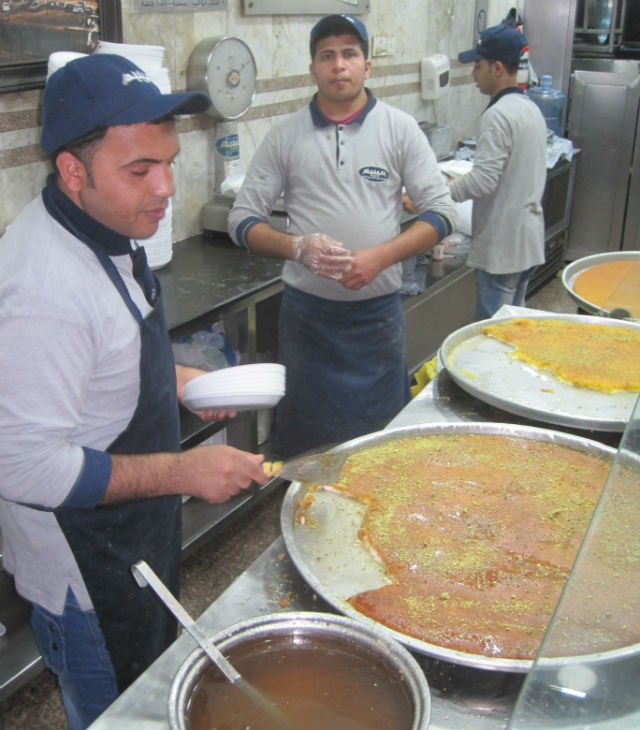 I had forgotten about another of my favorite experiences in Amman, the tiny shop near Al-Hashem selling this sweet called kunafeh. According to wikipedia, it’s also spelled kanafeh, kenafeh, knafeh, kunafeh, knafeh, or kunafah. Thanks wikipedia, thanks for the clarification. It always looks like a methadone clinic on a Monday morning after a long weekend. I’ve never passed by when there weren’t at least a dozen people huddling by the entrance, waiting for their fix. Just under a dollar for a small portion. 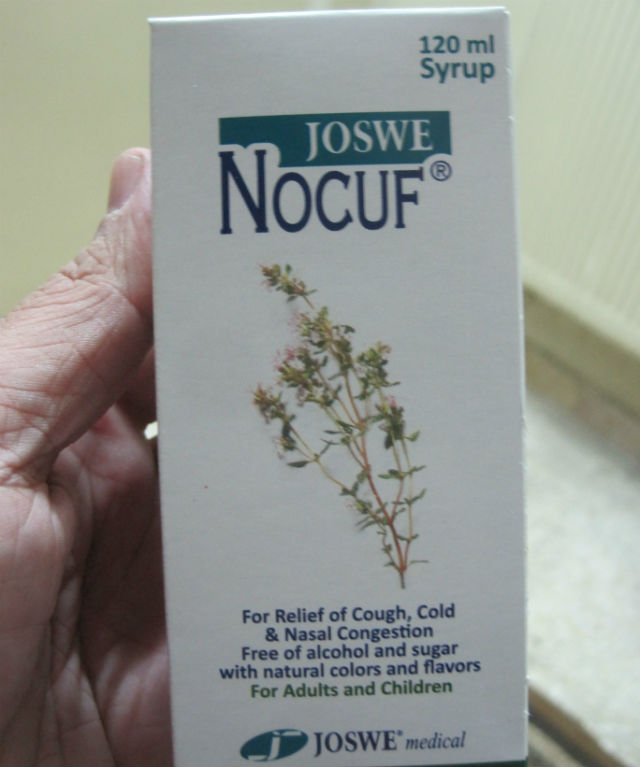 It’s my fault. I did ask for the cheapest cough syrup. Nocuf (get it?) has a taste that is indescribable, the opposite of kunafeh/kanafeh/kenafah…

PRACTICAL INFORMATION (1 dinar = $0.70 US)
From the airport it would appear to be a good strategy to try and go south right away since the highway is nearby and on the southern side of town, but there is zero public transportation heading south and the government-run JETT buses won’t stop. As it is, you are stuck with the 3.25 dinar bus to town, and then if you put your bag underneath, they won’t let you out until you get to distant Tabarbour station. Try and bring your bag on the bus. Reason #54,773 to travel light.
In Amman I again stayed at Farah Hotel near Al-Hashem. (Al-Hashem really is an institution. Every bus and service taxi driver knows it, helpful in a maze of a town with nary a straight or flat street.) These days it is 10 dinars a night, but now they have heating in the rooms and Naim, who I remembered from my last visit four years ago, gave me my own room. It includes a breakfast I couldn’t get out of. I never pay for breakfast if I can avoid it; 95% of the time it’s overpriced and low quality. That’s a pro tip right there, that is!
Why don’t you stay with me? You can follow along with RSS, subscribe to an email feed, see what’s cooking on Facebook, pray that I’ll say something worth remembering on Twitter and if you are really slumming it, there’s always Google+. (I’ll follow you back!)