Let’s start with a bad photo taken through glass, bad photos being my specialty nowadays: 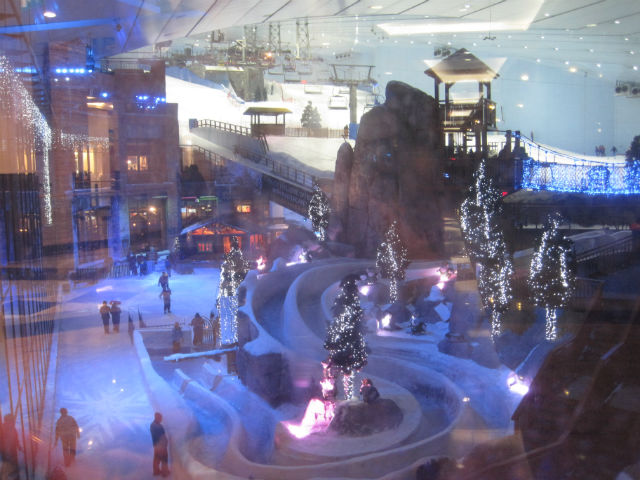 My third time in Dubai! The first time I met a Slovenian ski instructor who worked here at Ski Dubai in Mall of the Emirates.

I was in line at the metro to buy a ticket. A Kenyan girl in the booth was telling off two guys in front of me, “Why are you Pakistanis always trying to cheat?” They appeared to be trying to use a false stored value card. The way she said it made me laugh, and both guys quickly turned to me. It was tense for a second, but the moment passed as they took her haranguing in stride and sauntered off.
I knew the girl was Kenyan from her sweet, lilting accent and relaxed confidence as she leaned back in her chair to berate the Pakistanis—and because I asked. I ask everyone where they are from. I’m meeting Syrians, Indians, Filipinos, Bangladeshis, and so on. No Emiratis. I’m fascinated by a prosperous place where only 14% of the population is local, and in this case, well-hidden. The only Emiratis I interacted with in the United Arab Emirates are the ones who stamped my passport in and out, and I wouldn’t call that quality time.
Lots of Filipinos here. Someone needs to make a documentary, if there isn’t already one, about Filipinos working abroad and all they experience. Is it naive or ignorant to think that Dubai must be one of the best places to live based on the flimsy fact that dress codes aren’t strict and girls can walk around by themselves? 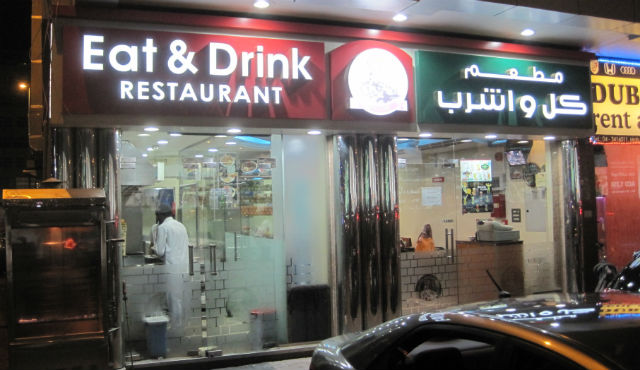 Dozens of brainstorming sessions went into this restaurant name.

I flew to Abu Dhabi on Etihad Airways. Last year I also flew to Abu Dhabi on Etihad and I got chicken pox. This time I thought I’d be more proactive to ward off illness and I went around the cabin spitting in everyone’s face. Um, actually, I spent time talking with a flight attendant who let me hang out in the back cabin. I mentioned that I tried to convince the airport staff to let me have an empty seat next to me because it was my birthday, but to no avail. Later, he had this cake below brought to me by a Hungarian(!) chef. 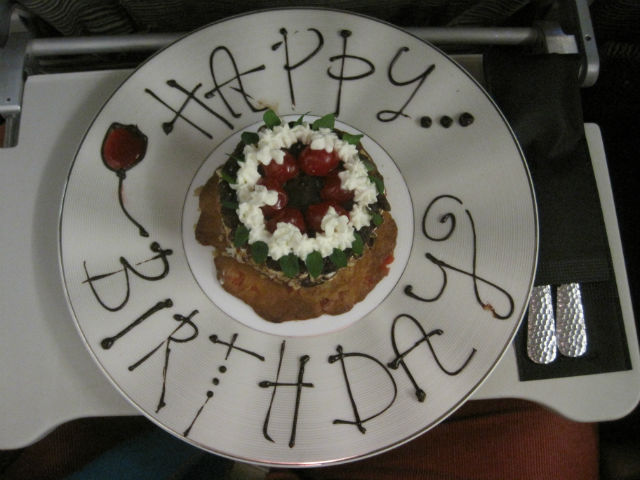 We were talking about how international Etihad’s staff is and he mentioned that since Etihad bought Air Serbia, there has been an influx of Serbians. He went on to say that Romanians used to be the most beautiful flight attendants, but now the title has gone to the Serbians. “They’re taller than me,” he started, but his voice trailed off as maybe a public area wasn’t the place for this conversation, so he merely shook his head in amazement. 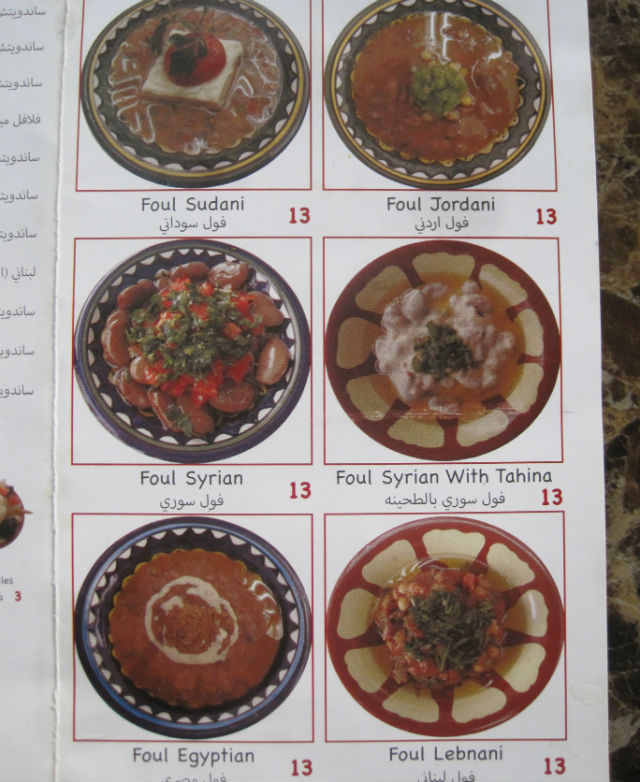 It’s great to be back in the Middle East. I didn’t know there were so many varieties of foul/fuul/ful (mashed fava beans with spices.)

I only stayed 48 hours in Dubai, and I didn’t get out much in my jet-lagged fog, but I am returning in a couple of weeks. Dubai seems to get a bad rap among travelers, but I am of the mind that Dubai is like Singapore, the best first place to visit in a region. Like Singapore, if it’s your first time, it’s exotic, a rush for the senses, vaguely familiar (but deceptively so) and you only realize how expensive it is when you visit nearby countries. Plus, they both have an (undeserved?) reputation for being fake and soulless. 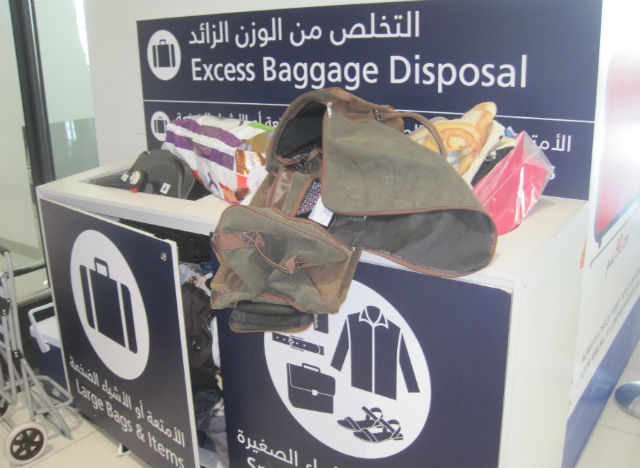 If you are down on your luck in Dubai, just go by the airport and take all the stuff that people abandon. 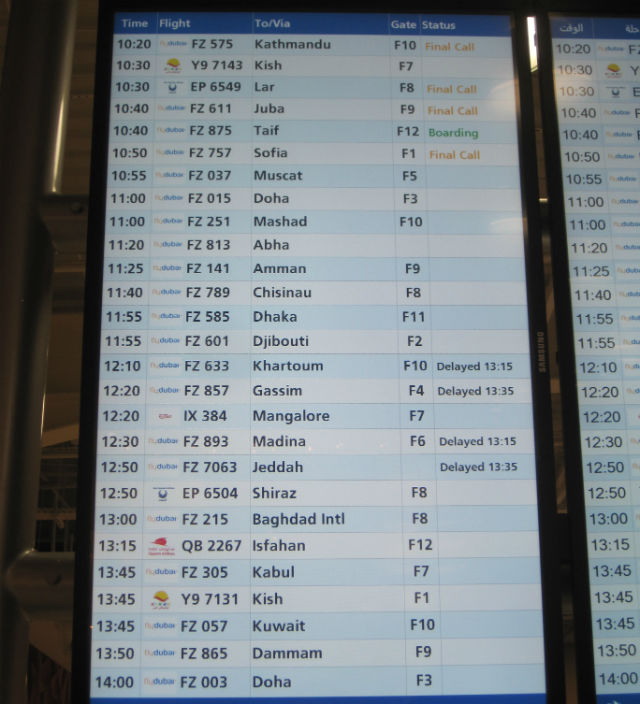 Now THIS is a departure board. I will feel like a world traveler when A) I have visited half these places (only been to six) and B) I know where all these places are. (I was stumped by Lar and Gassim.) Graydon, what are your numbers?

A check-in kiosk showing how the dregs of world aviation are clustered together at Terminal 2. This is a very formidable quintet of airlines. 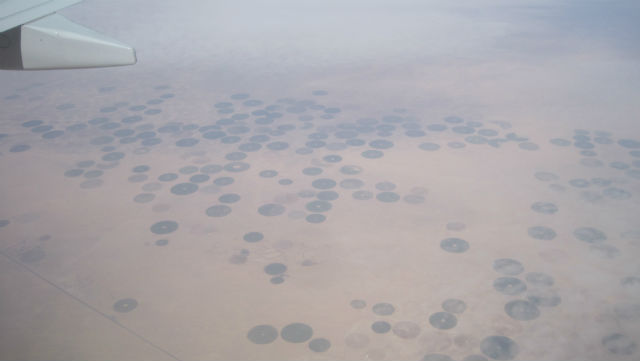 Flying over Saudi Arabia, I noticed these circles. What are they? Something to do with drilling oil?

PRACTICAL INFORMATION
flydubai is the discount airline of Dubai—I saw Dubai-Zanzibar $264 round trip in two weeks; I am thinking about it—and uses forgotten Terminal 2. The cheapest way to get there is take the green metro to Abu Hail and then bus 43, but it only goes every 20-30 minutes. You could walk from the metro to Terminal 2 if isn’t too hot.
Don’t stand in line at immigration if you I flew into Abu Dhabi, a different Emirate, and out of Dubai. There is a side office you have to go where they will stamp you.
The Dubai metro doesn’t open on Fridays until 1pm. I discovered this the hard way, but a friendly Indian guy guarding the station gave me a ride closer to town, a very nice re-introduction to Dubai.