This is my second visit to Sri Lanka; I was last here 15 years ago when there was still a civil war. I was surprised to see a new highway going between Colombo and the airport, but it seems to be the only addition or improvement to the infrastructure. In essence, zero has changed in Sri Lanka in 15 years. If you like your countries frozen in time, Sri Lanka welcomes you warmly.

Tell it like it is, Sri Lankan Sign Maker! The other two languages on the sign are Sinhala and Tamil. I learned both over the weekend. Easy peasy.

My time in Sri Lanka is entirely improvised. I impulsively bought a cheap ticket from Dubai and flew out two days later. My life is usually entirely improvised. Most of the time I don’t know where I am sleeping night to night. It’s an endangered way of traveling that is threatening to becoming extinct in this age of pre-booking and planning everything. The convenience is worth the trade-off, I guess the argument is. Maybe there is a good reason my way of living is close to extinction: I’m always tired.
I went to Negombo, a beach town north of the capital, Colombo, and close to the airport that used to be infamous for child sex tourism. I expected a poor man’s Pattaya, and went early in case I wanted to escape, but it was pleasant. I didn’t see anything skeezy at all, and I had this great first Sri Lankan meal: 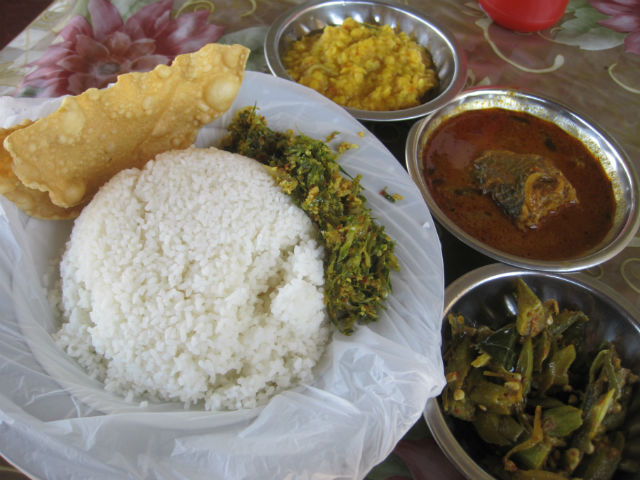 This was 250 rupees (US$1.90), I believe. From the top, clockwise: dahl (mashed lentils), fish curry, okra—I didn’t eat it. Sorry, Mom, I know you love okra—rice, papadam (a crispy chip made from lentil or mung bean flour) and the green stuff next to the rice is just something tasty and indescribable. The woman behind this meal had a lovely accent, and her English was better than I would have guessed, and then it came out that she was actually British, a Sri Lankan emigrant who returned home because of an illness in the family. The visit became prolonged and she started a tiny restaurant with her husband.

I found a cheap, good place to stay, Nature View Lodge in Negombo, right by the beach. I bargained and got a room for 1700 rupees (US$13). In a whisper I was told to be quiet about my deal, though I am probably paying more than everyone. How did I learn about this place? By doing a radical thing: going up to another traveler and asking. That’s a novel concept these days. No one talks to each other any more. This used to be the traveler modus operandi, partly because there was no internet and partly because it is a better way that has been lost in our desperate, never ending search to find the best information in a sea of dreck. How can you glean anything useful out of TripAdvisor? How can you sort through all the reviews for a trend when you have no idea of people’s biases or expectations? There’s no consensus. I find it a waste of time. I can take one quick look at this unkempt traveler, his backpack, his clothes, and know his word is gold. The owner of Nature View turned out to be a two-faced shyster, but that’s besides the point. 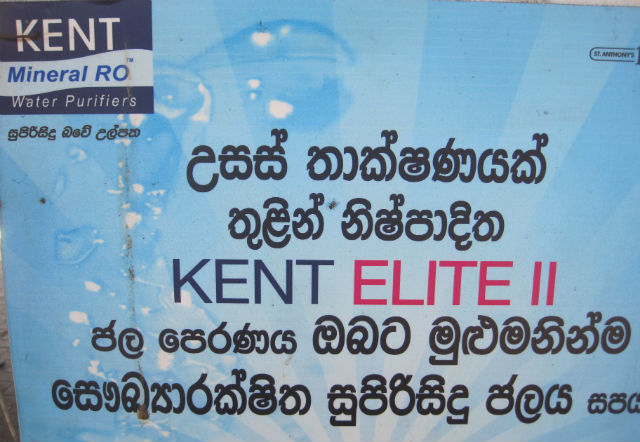 The Kent Elite II water purifier. Full refund if you die from dysentery!

There was a topless European girl frolicking in the water and she was being openly filmed by a local guy on the beach like he was on a safari. (I wonder if Sri Lankan boys have a Big 5 of topless women they hope to spot.) When the girl noticed, she shot him a look of reproach, but I could hardly blame him. I’d have done the same, but I might try and be cooler about it. It’s crazy for the exotic white woman to think that in a deeply conservative society she can appear on a beach topless and not expect to be stared/filmed. I have read that nudity is illegal, but I don’t know if it is true. 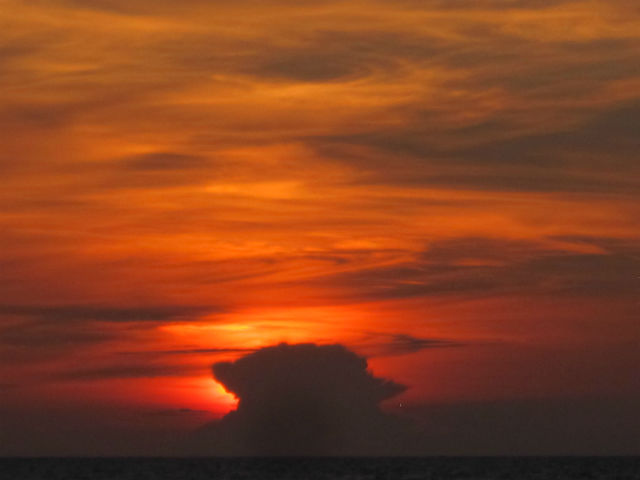 Negombo sunset, the first of many daily fantastic sunsets. The water is a perfect temperature and seems clean enough, though I wasn’t thrilled to have a giant jellyfish slime across my chest.

I was on the beach at Mt. Lavinia, a beach town south of Colombo, a few days later during a poya (full moon holiday) and there were throngs of locals, but I noticed only one local girl wearing a bikini top. This in itself caused a small stir among the nearby guys as she clung to her father lest in fear of becoming the slow wildebeest, so an exotic white woman topless? The boys are probably walking around with 15 spare camera batteries just for such an event. 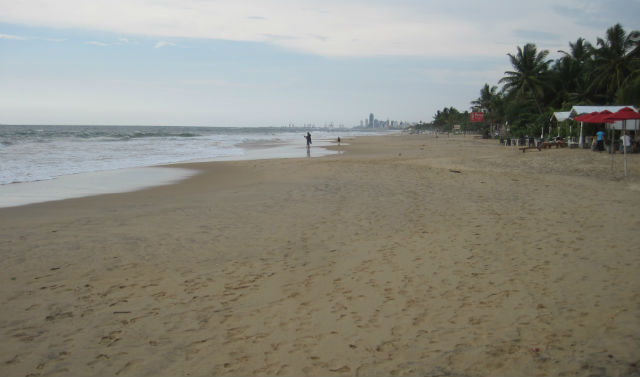 Mt. Lavinia beach, the day before the holiday.

With dumb luck I stumbled on to Mt. Lavinia Beach Hostel, a rambling home partially converted into a hostel very close to the beach, but I woke up in the morning with red spots all over my legs. I don’t know if it was mosquito bites or bedbugs. Mosquito bites are alarming since there is dengue fever, malaria and chikungunya in Sri Lanka, but what’s a little degenerative virus when your hostel has the smell of frangipani? Do you know this tree? Frangipani is so beautiful and the flowers so fragrant, it is creeping into my Top 5 Trees (redwood, jacaranda, baobab, banyan, and my memory fails me for the fifth. I think it’s a Brazilian tree…) It made me want to to stay. I’ll pay better attention at getting my mosquito net right.
I had to go into town to try and buy a train ticket to Jaffna. A train to Colombo Fort station runs from Mt. Lavinia right on the coast, so close to the beach that when you sit on the sand you can feel the rumble of the train passing by. I’m glad everyone else has the mindset to take the bus over the train to town, which is insanity. I did it once; it took me an hour to go 10km. You sweat to death, you have to put up with the noise and the strong starts and stops in traffic, the hothead driver is shouting at another driver, and then you wait until he feels that he has enough passengers. OR, you can take the mellow train with sea views, the breeze, hang out with the stationmaster, be allowed into the office to see the cool, old-fashioned equipment and the ticket booth with the thick, Edmondson-style tickets they still use. No-brainer! 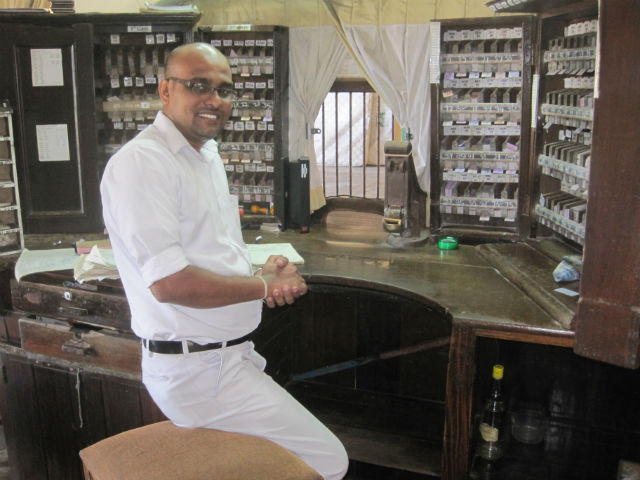 The Mt. Lavinia station ticket cabinet. That is an arrack (very strong, distilled alcohol) bottle under the counter. I am going to say that it is filled with water, but if you had to deal with gee-whiz-can-I-take-a-photo foreigners all day, you’d be on the hooch, too. 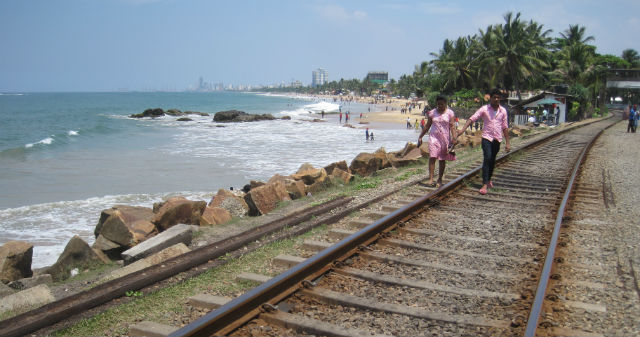 The train tracks of Mt. Lavinia. 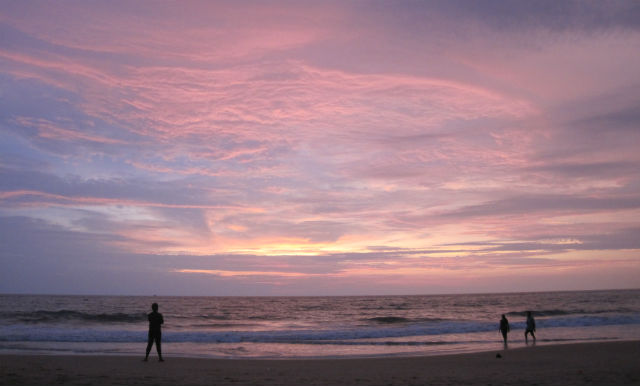 PRACTICAL INFORMATION (US$1 = 133 rupees)
I flew flydubai from Dubai to Colombo for US$140 one way. Not bad for a four-hour flight, though it was a red-eye and I found myself half-dead at Colombo airport at 5am. There is an electronic visa you can get beforehand for $30 for us white-trash Americans (I got my confirmation in minutes) or you can pay $35 upon arrival, it appeared.
Mt. Lavinia Beach Hostel was 1200 rupees for a dorm or 1750 for a single room. I stayed in both.
Never buy SIM cards at an airport. They are taking advantage of you not knowing the market, but I am the last human without a smartphone, so don’t listen to me. I bought one for 150 rupees in town.
Last thing: from my visit 15 years ago, I have only this story to show for it. I might have recklessly made up the last sentence as I can’t imagine half falling asleep outside at a cricket match. 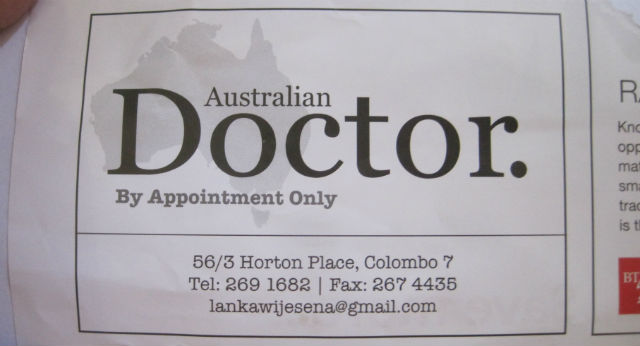 I don’t know why I find this noteworthy. Maybe that I don’t need a name. “Australian Doctor” is enough? If I were Aussie and I became sick, would I call him/her? I might. 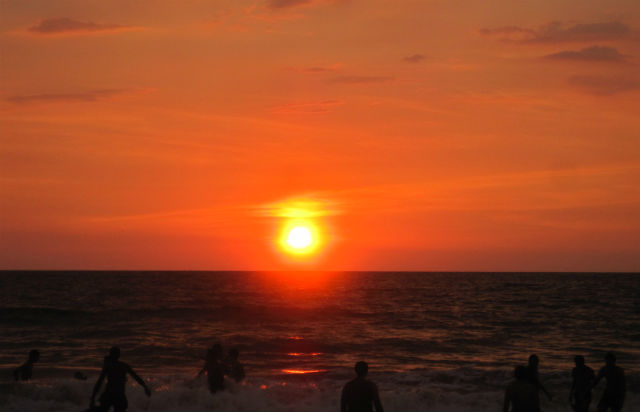 Just one last sunset pic, if you don’t mind.