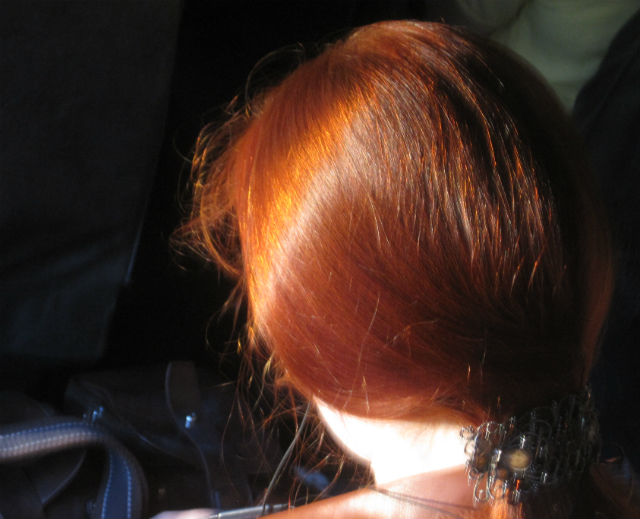 In Vladimir I met up with a friend with bright red hair—but this isn’t her. This is a girl on a bus. Who knew Russia had so many striking redheads? Someone please tell me there is nothing creepy about taking a photo of a girl’s hair on the bus. Someone? Anyone? Hello? Would 100 rubles help?

When I alighted from the train at Vladimir, 190km (120 miles) east of Moscow, I saw the Trans Siberian train on the platform next to mine and stopped in my tracks. I stood still as others passed around me and considered my urge to jump on it. Go East, Young Man! Oh, how delicious that would be! East! Kazan! Yekaterinburg! Irkutsk! Khabarovsk! Vladivostok! Vladivostok, one of those cities I have never been but have long desired to go along with the likes of Tehran, Montreal, Philadelphia, Minsk, and fifteen places in Central Asia. But nooooooo! Russia doesn’t want punks like me running around their country. Thirty-day visas, pffft! They offer multiple entry visas like they are doing me a favor. When I am in Khabarovsk, what am I supposed to do, nip over to North Korea and back to continue my journey? Please. 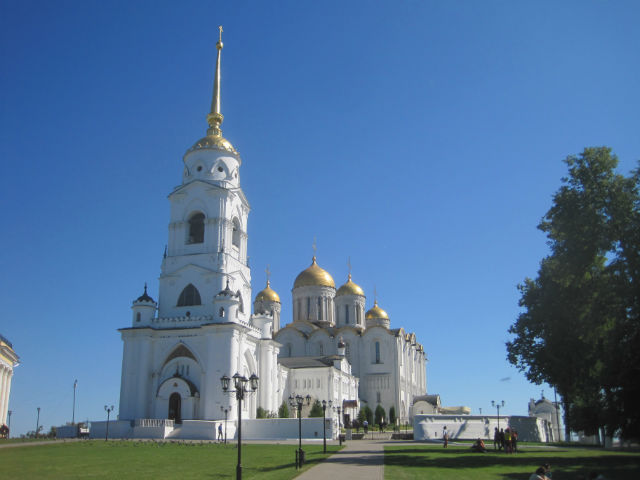 Vladimir’s Cathedral of the Assumption

Suzdal is a peach of a town with a fantastic atmosphere when the Chinese tour groups dissipate in the afternoon. The best is the sunset out behind the market square on the bluff overlooking the river where a good dozen or so art students paint and sketch in the quiet.
I stayed at Godzilla’s Hostel (Top 10 dumb name for a hostel) for 700 rubles (US$10). It was two Moscow girls and me in the dorm room. One of them had more tattoos than I have seen on a woman in a long time, and I knew that because she was prancing around in the most minimal of clothing. She said she was from Moscow but she had the classic Central Asian full moon face that I love.
At 2am I had to yell at them for being loud. I have a short fuse in hostels now. I don’t care what you’re not wearing. The worst of my wrath is reserved for the inbreds who have loud keypad tones when they text in the middle of the night. Why does anyone even need a keypad tone? Why is it on as a default? Are there people on this planet who don’t find that incredibly annoying? What is going on?
A slightly milder version of my intense noisy gadget hatred is reserved for people with digital cameras that make a loud, non-digital, old school camera shutter sound when taking a photo. Why oh why does anyone need a sound at all, much less that sound? Are people suppose to feel soothed or reassured? Who are these people? I need names!
What was I talking about? Oh, the hostel is the only one in the village, and in a good location. Great facilities. 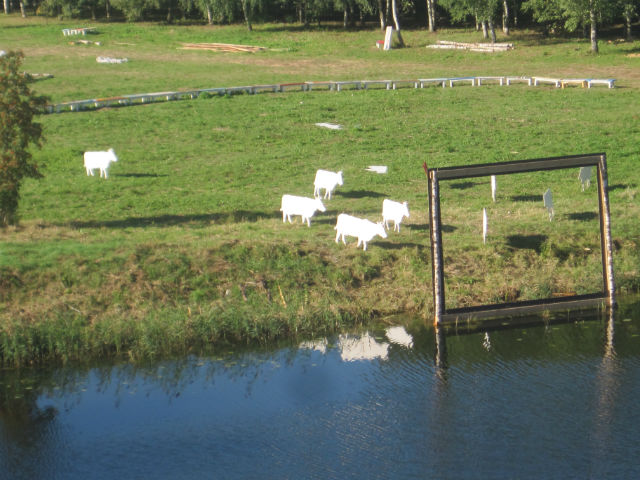 The fake cows of Suzdal heading toward what I believe to be a real river. 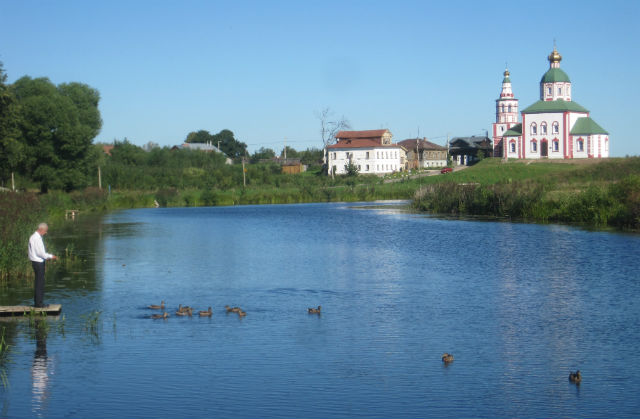 ATTENTION! ATTENTION! DEEP PARAGRAPHS AHEAD! PROCEED AT YOUR OWN RISK!
When I was Thirty Days Younger Kent Foster, I was nervous about coming to Russia, which is completely absurd and embarrassing that I ever had such a thought. Extrapolating that, if you think about it, if I, Grandmaster Traveller, had feelings of trepidation about Russia, then how about everyone else, particularly the 99.9% of Americans who have never set foot in Russia?
When you know precious little about a place and stay in an enclosed environment where the information you get that informs your opinions about other people and countries is from dubious sources, you can easily become enveloped in a myopic viewpoint based on fear and exaggerated threats. This is the essence of travel at its best: if you spend a little time in a country and develop even just a small understanding of it, you are less likely to have hostile feelings toward it.
Some of us Americans claim that if any of our warmongering presidents had ever backpacked, at a minimum we would at least be more circumspect about our actions. It may be simplistic and naive, and backpacking itself hardly makes me a peacenik as I can think of a few guest house owners and taxi drivers I’d like to drop a drone bomb on, but the point is traveling can—if you allow it and are open to it—enable more positive attitudes, which is no small thing in these days of rigid opinions.
My god, that was deeeeep! So profound! And I blog for free! 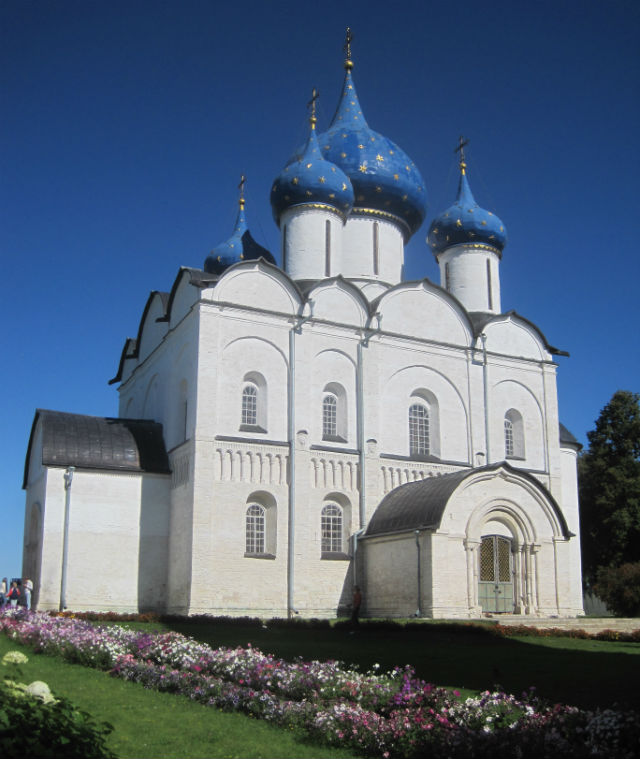 Inside the Suzdal Kremlin at the Church of Our Lady of Perpetual Tithing or something like that. I can’t keep track of all these churches.

I don’t even remember what I was worried about in Russia. I now only think of Russians as being reserved, gentle, kind, helpful people. In fact, as I now remember, all the problems I had last time were in Ukraine. Ukraine and I need to do some fence-mending. It’s been too long since I was there.
SOME COMPLETELY UNINTERESTING RANDOM THINGS I WANT TO INCLUDE SINCE THIS IS THE LAST RUSSIA BLOG POST:
—In Russia cars stop for pedestrians with an Australian-esque consistency (unlike supposedly uber-civilized Switzerland, where I was lucky to escape without tire tracks up and down my back). On my first day in the country I was struck not only by that but how few people jaywalk. And they don’t do it because of a threat of punishment, they do it as a matter of course.
—I have seen watermelons sold for as little as nine rubles a kilogram, which is US six cents a pound, which is a solid building block for paradise. All along the northern highways the side of the road is dotted with parked cars as people go forage in the forest for mushrooms.
—When you know only two Russian pop songs, and both are old, it’s exciting to recognize one of them being played in the street.
—St. Petersburg has less than half the population of Moscow, but it feels like a huge city. It is a huge city; at five million it has the same population as Finland or Denmark, but the hugeness is dispersed by the endless suburbs. Downtown never goes higher than five floors other than the churches.
PRACTICAL INFORMATION:
I bought a US$106 ticket on the website of Aeroflot/Rossiya Airlines to go one way from St. Petersburg to Burgas, Bulgaria. That’s a deal for 200 minutes of flight time, if you weren’t sure. With the ruble so weak, it’s a good time to buy things that aren’t adjusted more quickly to the worsening rate.
Run, don’t walk to Russia, especially at 68 rubles to the dollar. 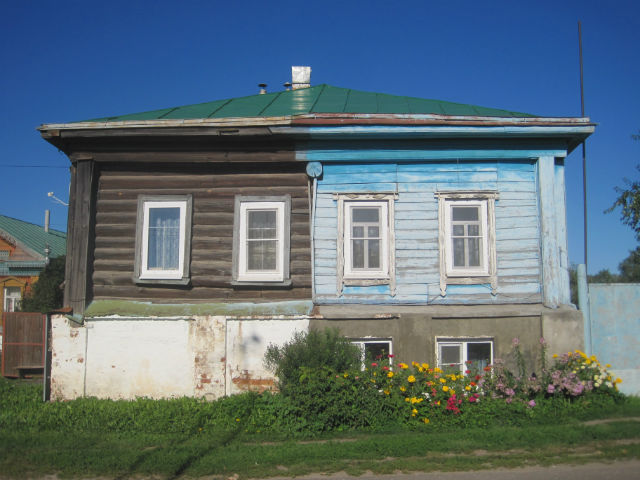 Seen on the back streets of Suzdal.