Hello from Bulgaria! I thought I knew a thing or two about Bulgaria as I have been here once before, but it is my first time on the Black Sea coast and it is a revelation—in mid-September, I should add, as my timing is perfect. I had no idea how attractive the beaches were, how mellow the people are, and the grapes and wild figs are at the peak of their ripeness.
I also didn’t know that the Cyrillic alphabet comes from Bulgaria. POP QUIZ QUESTION! How many countries use Cyrillic as their primary alphabet? Answer at the bottom. 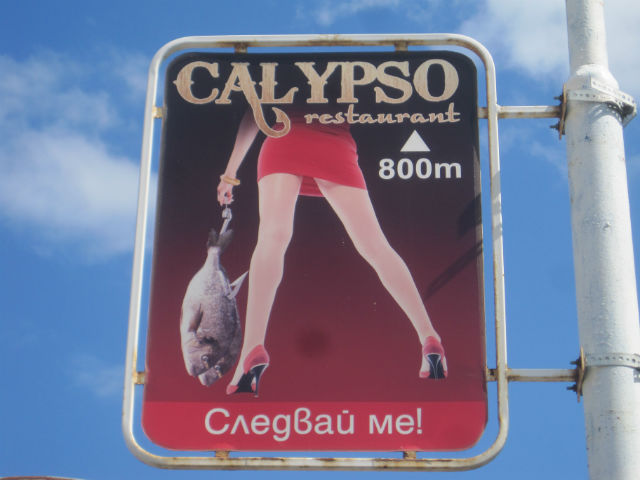 This is one of the first signs you see when you enter Ahtopol, 70km south of Burgas. I would have named the restaurant “Fish and Chicks.” Thank you! Thank you! I’m here all week!

For a region that is developed, the coast southeast of Burgas has a nice, raw feeling to it. There are concentrated centers, but it’s easy to get out to quieter beaches. Now all the beaches are quiet. In the towns when I do come across tourists, I hear very few western languages. Even in high season I don’t get the feeling westerners dent the numbers of Bulgarians and Russians that come.
Why isn’t Bulgaria on everyone’s travel minds? I believe Bulgaria needs to rebrand itself, and the name doesn’t help. “Bulgaria” is not a good name. “Bull”, “Grrrr”, bulgar/vulgar—these all have negative connotations. Since there is no clear reason why the country is named Bulgaria, why not change it to something that will convey a more positive image? I am thinking of a name that evokes the exotic, something enchanting, alluring, attractive. I am thinking “West Thailand”. 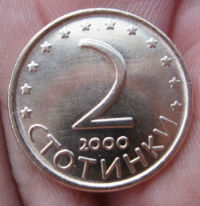 Bulgaria does have one name I like. The money in Bulgaria is the lev and there are 100 stotinki in one lev. Stotinki! Who doesn’t love saying “stotinki”? If I had West Thai kids I would wag my finger at them, “You have to save every stotinki if you want to travel!” 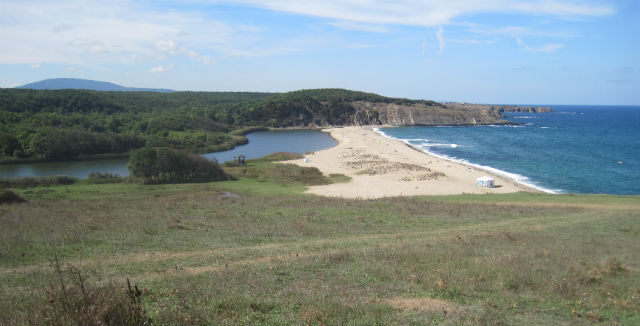 Isn’t this something? The river comes right to the sea, makes a ninety degree turn to the left, and then another ninety degree turn to the right before emptying into the Black Sea. This is Veleka Beach, a wonderful spot in Sinemorets, which is about ten miles (16km) from the (closed) border with Turkey. The farther down the spit of sand you go, the more clothing optional it is. The river is a titch warmer than the sea.

For some inexplicable reason the season is considered completely over by now, mid-September. It’s a three-month period where everything is at capacity, and then the rest of the year it all sits idle save for a few basic shops for oldsters who have nowhere else to go. My timing is perfect, but I don’t understand as it’s still warm and will be for quite a while longer. What else matters? Where is everybody? It’s 23C (73F) every day. Nights are pleasant. Why do people not come in droves beyond the tiny high season? What am I missing here?
If someone was writing a book, or just wanted a relaxing place to stay for a month, what would be better than Bulgaria in Sept/Oct? I bet you could get a place for a song, next to nothing, and the weather has to be great. Hungary is far to the north and it stays nice and warm until the end of October. 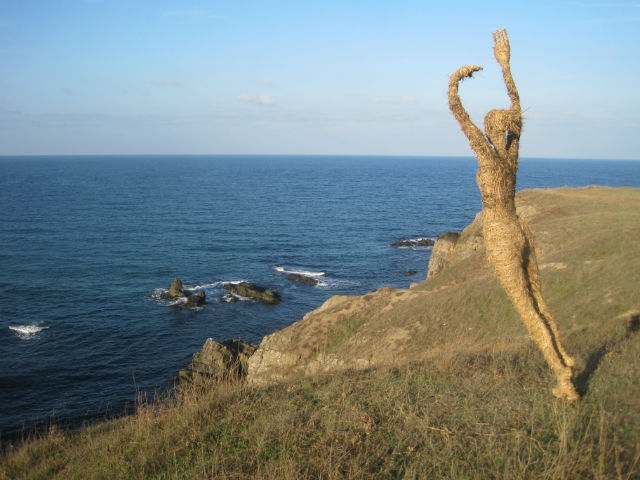 Hay sculpture on a bluff above Veleka Beach 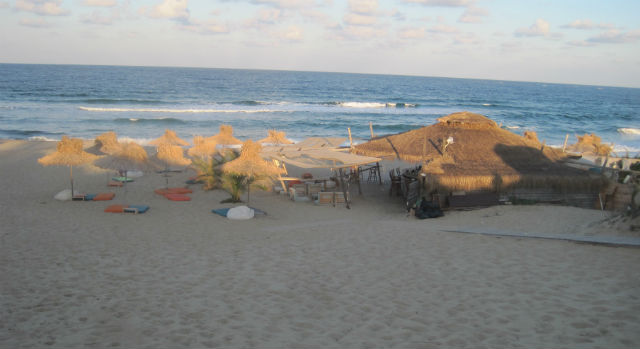 A friend from Sofia came out to meet me by the sea. We went to her favorite place, Smokinia (Fig Tree) Beach a few kilometers south of Sozopol, which is about 35km south of Burgas. This is another clothing optional beach, which meant a topless girl bartending but also a bottomless madman parading a Soviet flag around and bumming everyone out.
It was easy to hitchhike back to town. Strange how hitchhiking is so much easier with a girl. 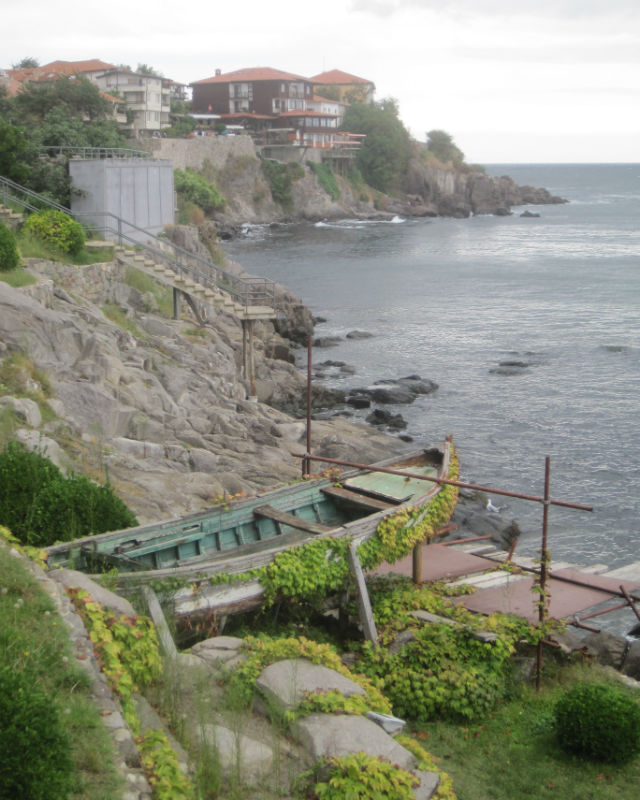 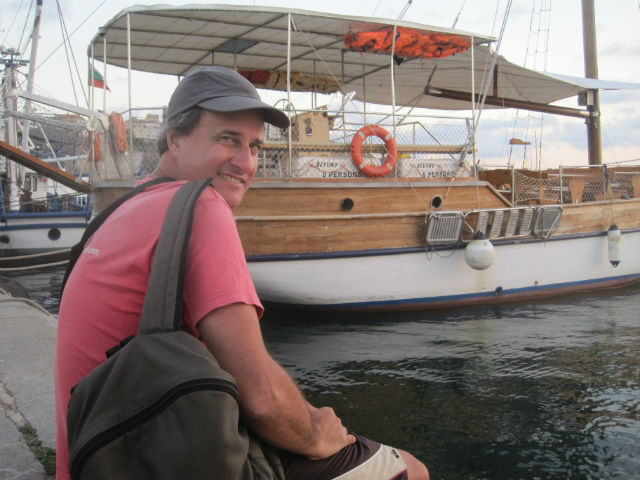 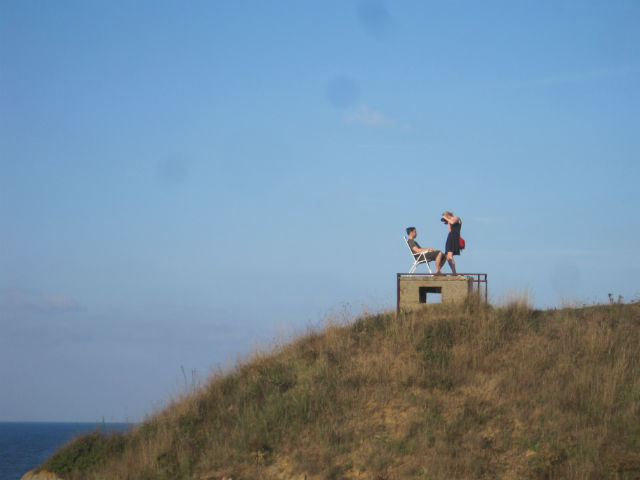 I should have done my photo shoot here. Look at how much junk is on the inside of my lens. I am getting a new camera before the end of the year with neither a kickstarter campaign nor crowdfunding. 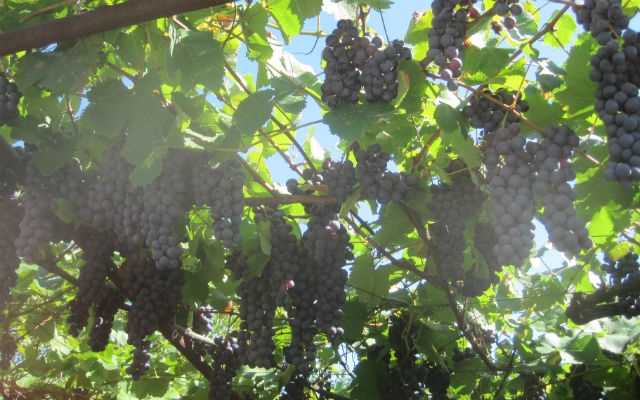 Grapes and figs, grapes and figs. They’re everywhere, and they are in season! This was in Varvara, a pretty little village just before Ahtopol. It looked like the house was closed for the winter, though I didn’t put much effort into checking as this was right next to the road where I was hitchhiking, and in between cars I would grab a grape. So sweet! I was disappointed when a car stopped to take me.

MEMORY LANE WITH A TENUOUS CONNECTION TO BULGARIA
If I ever forget the year I was first in Bulgaria I just google “Michael Jackson first concert Bucharest” because I hitchhiked from the Hungary/Romania border in a truck with one of Michael Jackson’s roadies, a British guy who was eager to unload quickly as he said he wanted to “perv myself silly tonight”. (The British are nothing if not eloquent.) While we waited at the Nagylak/Nadlac border (which used to be an all-time classic free-for-all with every kind of weird thing going on, but then both countries had to go and get all prosperous and law-abiding and join the European Union) he introduced me to another roadie who had a giggly young German girl traveling with him. They had an arrangement where she would “see Europe” in exchange for him having his way with her. He was thrilled with the deal, he winked to me. That seems like forever ago as it’s almost unimaginable to me that a German girl would make such a deal today.
Every border on that trip was memorable. At the Romanian/Bulgarian border at Giurgiu I was stuck as they wouldn’t let me walk over the Danube, but then an American woman on her own in a van materialized out of thin air and took me all the way to Veliko Tarnovo, my destination. While walking across the Bulgarian/Turkish border, a man came racing in front of me to take a bunch of photos of my face and then he ran away again. At the Turkish/Syrian border I saw numerous people stuck in no man’s land between borders in a dusty hell.
On and on. I was pickpocketed in Istanbul. I went to the US Embassy in Amman, Jordan at 5am to watch the Presidential election results on TV. However, the coup de grace was the Israelis destroying all my film from the entire trip because I had been in Syria, among other things. Fall 1992 was easily a Top 5 unforgettable trip.
PRACTICAL INFORMATION: 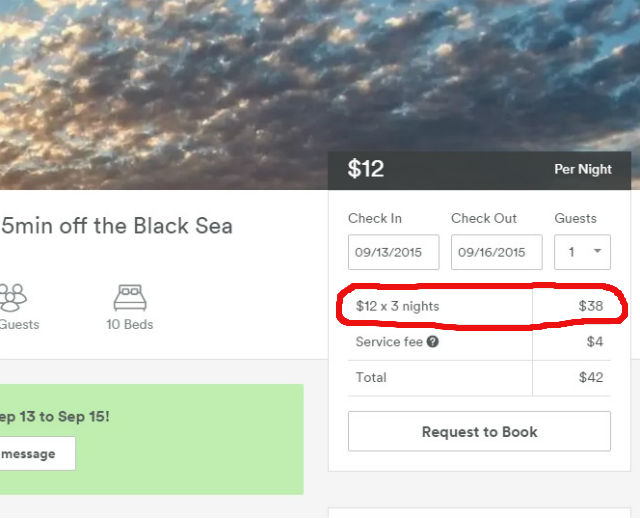 Look at this crap from Airbnb. This creative math happens because the person who makes the listing doesn’t do it in dollars, and Airbnb refuses to quote in fractions, so they conveniently round up. Airbnb is growing on me fast, but this kind of thing leaves a bad taste in my mouth. I hope they find the nickel and diming lucrative enough to counter the resentment.

I stayed at an airbnb place in Sarafovo, which is literally five minutes walk from the Burgas airport, and yet I never heard the airport once. Sarafovo, like nearly all the coastal towns, is very sleepy, yet has a pleasant charm in this still-warm weather.
In Ahtopol I stayed at Villa Jani Ahtopol on ulitsa Yana #8 (tel 0889-682889 and 089-7377151). 15 lev ($8.65) for a room with 2 beds, TV, shower, fridge, sea view and the woman even washed my clothes for free when I asked if there was a place to do it.
I flew here for only $106 on Aeroflot one way from St. Petersburg and felt pretty good about it, but saw there were even cheaper deals to be had since the season is almost over. aviobilet.com looks interesting, though you have to go to the Russian version to see those deals, while the English version looks westward.
Upon arriving in an unfamiliar country I ask the same question: can I drink the tap water? Sometimes people get a little offended, as if the question is really if I am in a banana republic. In Bulgaria everyone answers differently than the person before, and everyone is adamant, so I don’t take the chance.
WARNING! There is a drink called boza that is disgusting. It tastes like the juice from a can of pinto beans that has been sitting out in the sun for days and is beginning to go sour.
POP QUIZ ANSWER: Eleven countries use Cyrillic as their primary alphabet: Belarus, Bulgaria, Kazakhstan, Kyrgyzstan, Macedonia, Mongolia, Montenegro, Russia, Serbia, Tajikistan, and Ukraine. 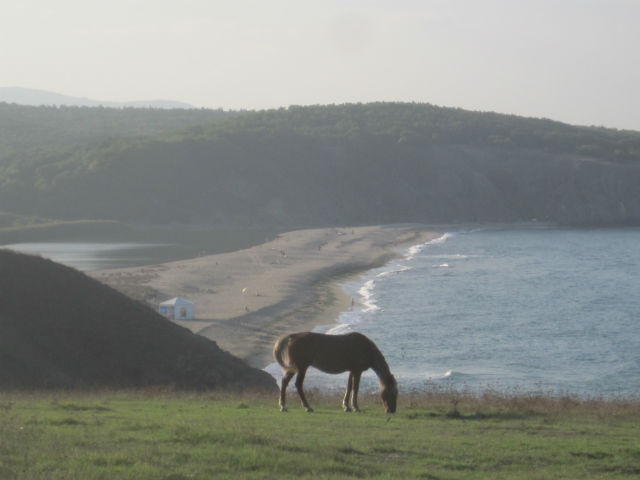 One last photo from Veleka Beach.