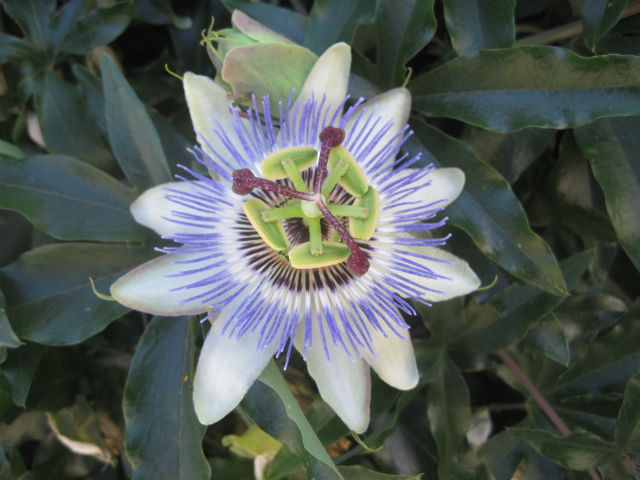 Hitchhiking has always been my favorite way of meeting local people. I hitchhiked every day on the Black Sea coast, sometimes out of necessity since buses can be few in low season. Since I am, um, less than fluent in Bulgarian, I’ve had to use a melange of languages to communicate with drivers, none of which I claim to speak, but hitchhiking is a privilege and I am happy to try anything, so I have been dredging up snippets of Swedish, French and often Russian.
The only time hitchhiking was a struggle was getting around Burgas and as a last resort I velcroed my USA flag on my backpack. It’s a western European technique I use that I wasn’t keen on replicating here, and it worked, but then I forgot to take it off and the next driver was a burly, sneering Russian on vacation with his girlfriend.
“I no like America,” he started. He wasn’t smiling, as some do when they say this—and plenty of people say this.
Oh boy, here we go, I thought.
“America,” he began again, but couldn’t find the words so he made a throat-slashing gesture. “Always war.”
He asked about the elections next year. I tried to convey that I didn’t like anyone running. He opined, “Clinton is…” and again paused to search through his vocabulary, “…crazy chick.” 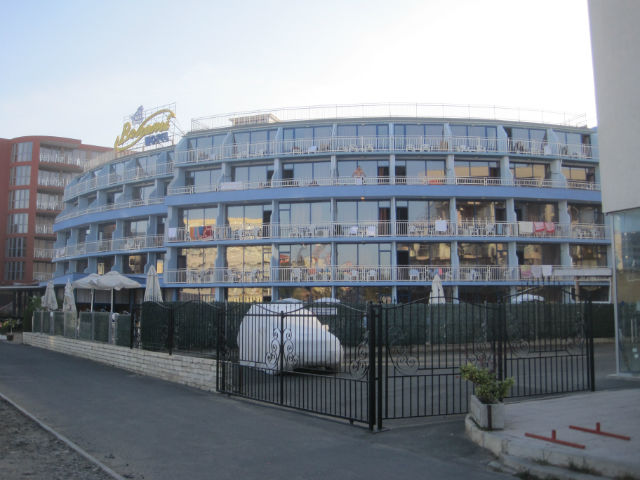 I was curious what a Bulgarian holiday resort was like, and I got a last-minute deal that put me on the middle of the top floor here at the Bohemi Hotel in Sunny Beach on the Black Sea Coast, 35km north of Burgas.

Sunny Beach is spectacularly awful, the true Las Vegas of Bulgaria. However, I had a nice room, modern, centrally located with a big bed, shower, toilet, toilet seat, toilet paper, towel, TV, aircon, AND buffet breakfast for 20 lev, which is $11.50. Thank you, booking.com, for letting me reserve without a credit card, too. (Alas, weak wifi. Serpents in paradise, friends. Serpents in paradise.)
When I arrived, however, I encountered something I hadn’t planned on: packs of loud British lager louts on holiday. They dominated the bar in the lobby, a swarm of them flirting with the bartender who looked like she had three acre-feet of makeup on her kabuki face. I thought a top floor room would insulate me from the rabble-rousers, but I was wrong. Drinking British are a more formidable presence than Chinese tour groups, and a gang of drunk British women is sheer terror. 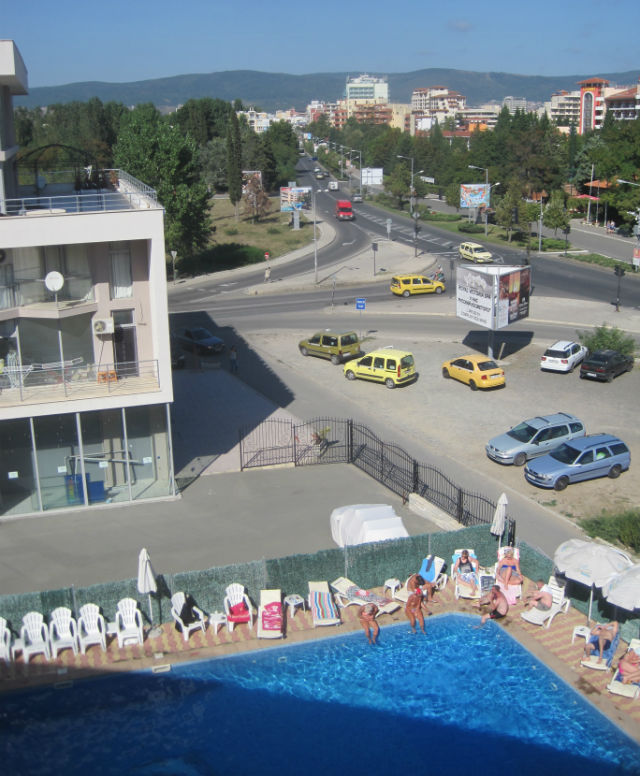 The view from the Bohemi. From here it doesn’t look bad, but go a little farther to the see the soullessness up close. It’s perhaps the only town in Bulgaria that feels like an artificial construct to cater to cheap tourists, so it’s a parade of noisy bars, sex shops, tattoo parlors and carnival food. The beach is churned up and worn with too many umbrellas, paid areas and commotion. Why did I leave my pristine Veleka Beach in Sinemorets again? 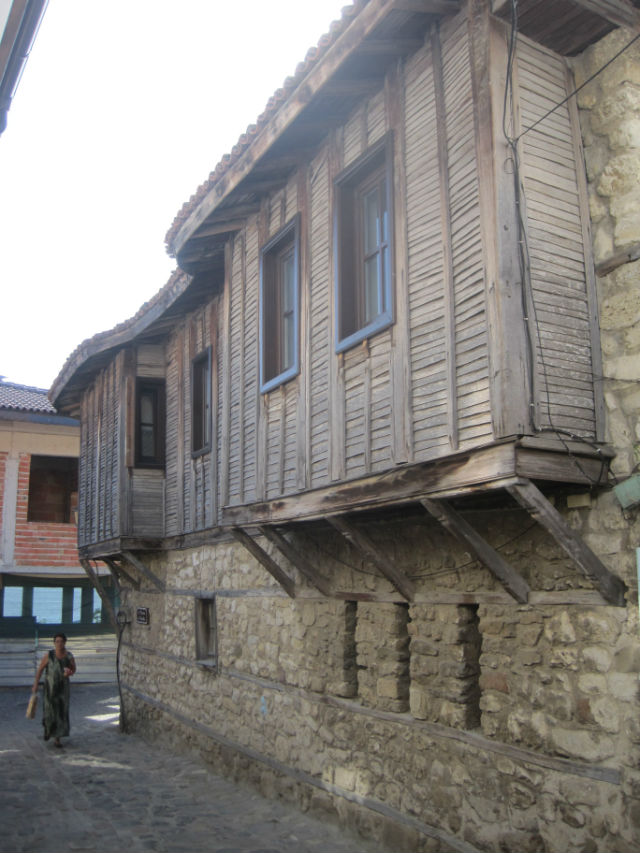 Oddly juxtaposed at the end of Sunny Beach is UNESCO-protected Nessebar with its cozy streets and traditional wood-on-stone houses.

If a Bulgarian asks for my name, I like to say it is Emil Kostadinov or maybe Yordan Letchkov, which always gets a smile. Who are they? Come on, let’s relive the best of the 1994 soccer World Cup in two short video clips! (This will be painless, I promise.) The first is this 13-second link to Letchkov’s spectacular header against mighty Germany, so out of the blue, that Letchkov became an instant hero that lasted for years, or at least until he was embroiled in numerous corruption scandals as mayor of his hometown.
This second video is so good. It’s the last thirty seconds of France vs. Bulgaria, the final day of qualifying for the World Cup. All France had to do was sit on the ball and they were going through, but David Ginola lofted a dumb cross from the corner, and a ten seconds later Luboslav Penev made a perfect pass to Emil Kostadinov, which is below. (As only the British can do well, there is an engrossing back story to the day’s events. Penev and Kostadinov had to sneak across the French border before the match because the Bulgarian football federation forgot to apply for their visas.)
The result was that Bulgaria qualified for the World Cup at France’s expense. The French commentary in the video adds to “la cauchemar” (the nightmare) as you see written on the bottom. I was watching this live on TV in Hungary with Peter Nagy in his home. A family member or two might have awoken in my celebration on a school night, but they still invite me back.

PRACTICAL INFORMATION
These are some Bulgarian websites a friend recommended to find a cheap private room or hotel room. What I like is that they give complete info about the place and you can contact them yourself.
http://pochivka.bg/ (It is better to use the Bulgarian version and use Google Translate because the English version, bgstay.com, doesn’t have a way to sort by price.)
http://www.vipoferta.bg/
http://bghotelite.com/
http://www.kvartiri.ltd.bg/ 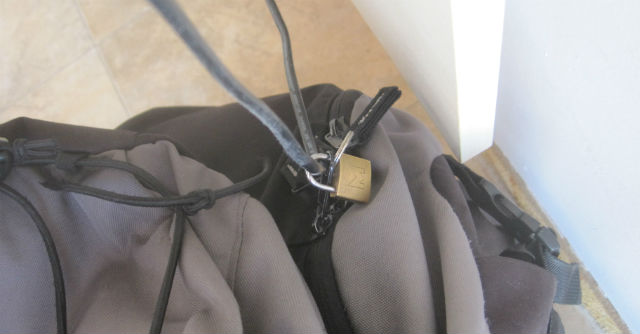